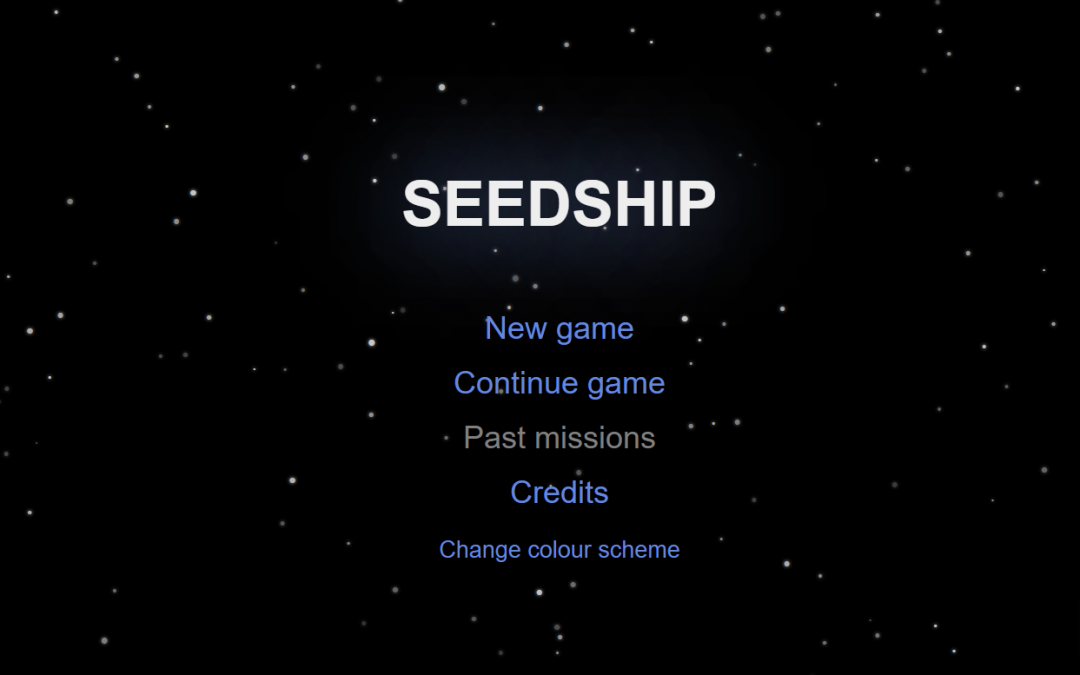 I fantasize about space travel in small moments throughout the day. The idea of sailing the nebulae, onwards to the next star, then the next, is intoxicating. I’m romanticizing, I know. Space is harsh, bleak. It will kill us without thought or conscience if we don’t approach the challenge of traversing its vastness with sober thought and care. But the appeal of leaving behind capitalism, leaving behind patriarchy, of trading gender binaries for stellar binaries—that appeal is strong, and it endures.

“And when they knew Earth was doomed, they built a ship.”

Again, a romantic outlook. I know. But I promise I didn’t pick it up from our media culture. The visions we entertain in our media—our literature, our films, our games—of future space-faring societies mostly just reproduce our present dilemmas, exchanging diesel for dilithium. Chris Roberts describes his space-combat sim Wing Commander as “World War II in space.” Instead of German and Japanese pilots, you gun down the othered, orientalized Kilrathi species. Spiritual successors StarLancer and FreeLancer exchange the World Wars for the Cold Wars, and the bad guys explicitly become Russian, Arab, Chinese. Put simply: Other.

Space strategy games, even when they attempt to decentre humans, still can’t see past pitting their factions against one another in contest and conflict. Master of Orion, StarCraft, Stellaris: Empires, Empires, Empires.

Open-world games, too, feel ironically claustrophobic in some ways. No Man’s Sky casts you as a nameless sojourner amidst three impotent, idling alien civilizations, and tells you to explore, colonize, exploit. Employ. Enslave. Just for kicks, at the end, upon reaching the centre of the galaxy, the curtain is drawn back and it is revealed that you’re in a vast simulation. You’re given the choice to reset it—the universe. The fates of all the galaxy’s trillions of virtual souls are placed in your too-tiny hands.

Elite Dangerous, alternatively, offers you a factional choice: between a hopelessly corrupt Federation openly run by megacorporations, and an Empire, explicitly modeled on the Roman one, where slavery is back in vogue. There’s a third power, sure, but they’ll all hold hands in the end—fascists and slavers included—to defeat the aliens. The Others. Always Others. Empires thrive only so long as there are Elsewheres and Others to exploit.

It’s always the same narrative, isn’t it? An old line, nearly a commonplace: “Someone once said that it is easier to imagine the end of the world than to imagine the end of capitalism.” It’s a secondhand, bastardized quotation, appearing in Fredric Jameson’s “Future City.” It’s almost a throwaway, but it’s endured in public consciousness—misused, misremembered, misattributed. I’m sick of reading it, of seeing it, of using it. But here I am.

Capitalism is a narrative with a deep gravity well, and invested as it is in hegemonies and hierarchies, it’s an invariably heteronormative one. Games, however, should be particularly suited to challenging that narrative. Queer games theorist Shira Chess observes that traditionally heteronormative (i.e., climax-oriented) narrative theory cannot be neatly mapped onto games and instead advocates for a queer narrative approach, i.e., “focusing on pleasurable possibilities embedded in the middle of the narrative.”

Chess’ approach, and indeed that of queer game studies as a whole, is rooted in a more theoretical understanding of queerness: seeking disruptions/interventions to broader normative structures, such as storytelling conventions in games. This approach is related to but distinct from a personal, everyday understanding of queerness in terms of identity and/or sexuality. That being said, I find that I cannot cleanly separate these understandings in my own queer approach to games. My own personal relationship to queerness is more about disrupting heteronormative approaches to gender and relationships and less about determining the precise bounds of my sexuality. In a sense then, I too am personally in it for the pleasurable possibilities, in my life as well as in games.

Answers are out there, though. Kara C. Stone’s Ritual of the Moon, for example, explores isolation, queerness, and healing from the perspective of a witch exiled to the Moon. Worst Girls Games’s Heaven Will Be Mine retains the cold war and space imperialism, but uses them as a backdrop to develop its queer, mech-piloting protagonists.

For my part, I found some solace in a small, intimate game I discovered on accident. A free game, if you’re curious. And, despite not having any named characters, a very queer game.

Seedship is a narrative-driven Twine game authored by John Ayliff. The game places the player in the role of a sentient artificial intelligence aboard a colony ship bearing the last remnants of humanity on a voyage to find a suitable planet for colonization. The game ends when the player selects a world to make a home out of, and a text passage is generated which summarizes the consequences of the player AI’s decision for the colonists—and for any indigenous life that happens to be on the planet the AI—that is, you—has settled.

The game doesn’t flinch from those colonial consequences even as it reproduces them. Some campaigns end in war; others, distrust. Others still, enslavement. The colony ship contains two database modules—scientific and cultural—and the amount of damage these modules sustain over the journey influences the level of technology and the style of governance the human passengers settle into after they land. Other factors also influence these outcomes—namely, how hospitable-for-human-life the chosen world turns out to be—but it’s worth pointing out the pitfalls of trying to reduce such broad concepts as science and culture to linear percentages out of a hundred. “How much” culture you land with, on the face of it, is a pretty reductive idea, and kind of an uncritical distillation of the power dynamics that ultimately inform what is canonized as cultural knowledge and what is left to the margins.

It’s a limitation of the game design—but the game also isn’t a power fantasy. It doesn’t task me with guiding that new colony, to whatever end, once it touches down. I will see the promised land, such as it is, but I will never walk there. I belong instead to the immeasurable interim, as I while the millennia away drifting through the black, watching, dreaming, wondering. There’s no faster-than-light engine aboard the Seedship. My charges are all asleep, cryogenically frozen. I am truly alone.

There’s a lot of time to think.

“they created an artificial intelligence. Not human, but made to think and feel like one”

I have identified as nonbinary and queer for a little over a year, and that is the result of years of positive, loving influence from other nonbinary and queer people in my life. Toxic masculinity has done me no favours. It has caused me and those around me great pain, and it has exacerbated my existing mental health challenges. I’m happy to leave it behind and work towards undoing my internal socialization as I learn how to be vulnerable, how to provide and receive emotional support gracefully, and how to think beyond my own feelings and consider those of others. I don’t think masculinity in general is a doomed project, but I prefer to do my part in recuperating it from the outside—beyond its narrative, its gravity well, if you will—rather than from within.

Still, my journey towards queerness, such as it is, has been quiet and lonely.

There’s a lot of time to think.

My sole agency in the game, as the AI guiding the titular Seedship, is to study each new world I arrive at with imperfect, sometimes-unreliable instruments, decide which resources to save and which to sacrifice when accidents occur between worlds, and ultimately choose where to make my one and only landing. The game describes a very narrow set of planetary conditions under which human beings can comfortably thrive, but draws upon a much broader list of possible conditions beyond this range. The result for the player is that finding a planet with even one hospitable category takes some luck, while finding one with favourable conditions in all six delineated categories is wildly improbable. The steady stream of catastrophes that befall the expedition infuses each campaign with a soft time limit and encourages me as a player to settle for less-than-ideal worlds and try to make the best of things.

There are no perfect fits in Seedship. No right answers. The final choice is still a binary one—land or move on—but all other binaries are disrupted. There is no normative planet out here. Is the atmosphere breathable or toxic? Neither: the colonists can do without pressure suits, but still require masks. Are there enough planetary resources to preserve all of humanity’s technology, or are they headed back to the stone age? Neither: resources aren’t abundant, but with careful planning there’s enough to support a pre-space travel information age. The condition of the onboard databases does influence the shape of the society that will emerge, but the bounding values for each outcome are not explicitly delineated and the resulting colony is less likely to be an absolute dystopia or utopia and more likely to be something other, something new, not strictly dictated by the colonial-capitalist legacies left behind on a long-dead Earth. Though the quantified approach the game takes to resources and culture is limiting, the mixing of all the variables and conditions it includes nonetheless challenges any binary understanding of the possible outcomes for humanity it presents, be they capitalist, collective, anarchic, or otherwise. In the end, these discrete outcomes aren’t even the most important or interesting part of the game.

There are no real climaxes in Seedship—only pleasurable possibilities, embedded in the middle.

“It turns its scanners away, spreads its solar sails, and begins another long journey through the void.”

The time to think—the interim itself—is a privilege, both in and out of game. Seedship presents a vast universe, which, while not specifically for me, nonetheless allows me a space in which to fit and belong. It decentres heteronormativity by presenting a cosmos where there is no “normal” planet to strive towards. It decentres human subjectivity by casting the player not as a human colonist but as an AI, whose story intertwines with but is ultimately separate from the last of the human race. There isn’t even a strict linear chronology to the game, in the end, as it is meant to be played over and over, to be explored rather than won. Seedship presents a queer possibility space, and invites me—and my precious human cargo—to change, to grow, to adapt.

And I do need to clarify my privilege here. In my own life, belonging has never been a life-threatening challenge. My queerness is not very visible. I’m assigned-male-at-birth and I don’t experience much dysphoria. I am able-bodied. I have Japanese heritage, but not quite enough to be visible on a cursory glance, so I’m white-passing. I’ll never be attracted to cis men, so I’m often read as straight, too.

I’m not clarifying any of this to self-efface, or to self-invalidate, but to emphasize that my journey towards nonbinary identity and queerness has been pretty safe, and that safety is a privilege. It definitely influences my outlook.

To return to that outlook, perhaps the answer to Jameson’s infuriating, secondhand riddle has been hiding in plain sight the whole time. Maybe an end to the world is the solution, if we take the world to be toxic masculinity, if we take it to be colonial capitalism, if we take it to be the status quo. We can do better than these things, here on Earth and elsewhere. Is our future literally in the stars? I don’t know. But I hope so.

Because the world is heteronormative—for now, anyways—but the universe? The whole wide fucking universe is queer. And that’s a comforting thought—one I carry with me as I sail the nebulae.