Gamer Mom: Parenting Lessons I Learned From God of War

I would like to retract my original votes for Geralt of Rivia as No. 1 Sword Dad after playing God of War, aka “Dad of War.” I still love Geralt, but his parenting style is kind of—well, by accident of fate, and he spends a lot of time in search of his daughter. Losing your kids on a regular basis isn’t typically the sign of a good parent.

Kratos, on the other hand, is a constant in this shared gaming journey with his son, Atreus. Granted, the story implies that Kratos isn’t all that constant prior to the start of the game, and his emotional distance is evident, but for the sake of this perilous adventure, Kratos is never far from Atreus’ side, in body or mind.

When we initially met Kratos, aka the “Ghost of Sparta” in the 2005 game, also called God of War, he’s all about vengeance, violence, and arrogance. In the 2018 release, his rage has been tempered by another attempt at family life. Kratos has left Greece behind and headed off to Midgard. The game begins with the Disney Mom Syndrome firmly in place—Kratos’s faceless second wife, Faye, has died of unknown causes and, following her funeral pyre, Kratos and Atreus (whom he refers to mostly as “BOY”) have been tasked by Faye to scatter her ashes from atop the highest peak, as per her final wish.

After an opening big battle with the Æsir god Baldur, a battered Kratos trudges home, realizing that he must do what Faye asks, but having no idea how to do this parent thing on his own. He starts out by training this young child as a soldier, but as the story continues, it develops into a surprisingly sweet, painful, and honest tale of what it means to be a parent, doing all sorts of awful but well-intentioned things in the name of protecting and teaching our children to be better people than we are.

As a parent of a teen and preteen, God of War hit me in the feels several times in many different ways and offered some important teachable moments and reminders for me. 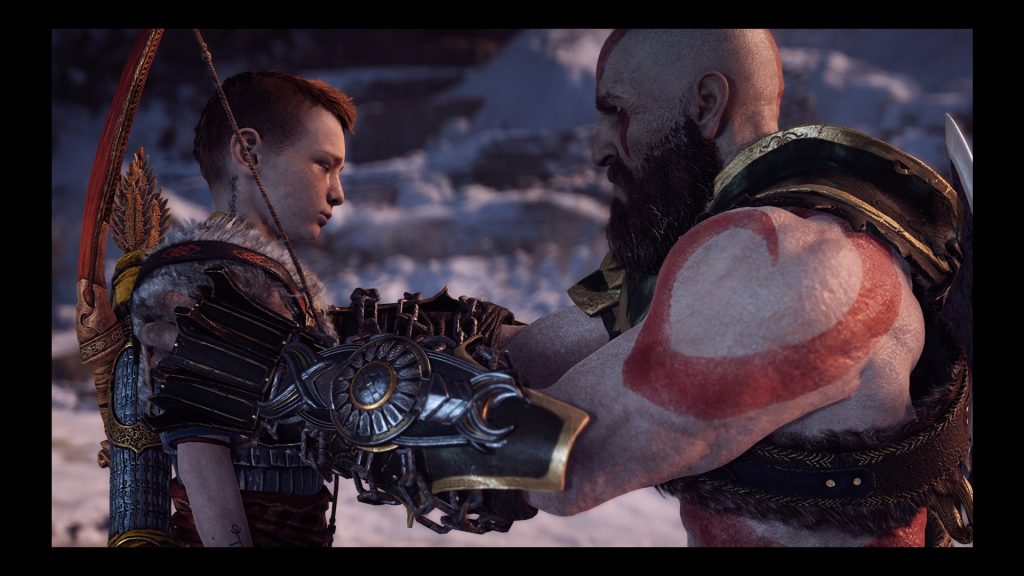 1) Family is Important but Also Shitty

Kratos spends most of the time lambasting gods as horrible beings who care only for themselves, but, as a god himself, he needs to do some looking in the mirror.

He’s not wrong, though. The gods he left behind in Greece are a whole lot of trash and hubris, as we know from Greek mythology. But the Norse gods Kratos and Atreus meet or learn about are all, “HOLD MY ALE!” Dealing with any or all of them offers many life lessons for a young boy who doesn’t yet know his true nature because his dad has been deceiving him this whole time. See below.

2) Lying to Your Kids is Mostly Always Wrong

Apparently, it’s totally normal for your parent to pick up large trees or boulders in Midgard, which must be why Atreus never seems to question Kratos on these actions. Well-meaning parents often believe that children are too young to understand certain facts about life in general or about their own specific lives, but kids deserve the truth at all times, no matter how harsh. Their little minds and hearts can process more than we give them credit for, and, even if they are indeed too young to fully grasp the enormity of a truth like godhood, giving them the facts and letting them ask questions means they can put the pieces together in ways that work best for their little brains. Lying to protect children usually backfires in some unexpected way.

Times when lying to your kids is sort of okay: when you eat their Halloween candy and blame it on a beloved pet.

Naming your children is really only important for government identification purposes. My children have learned to respond when I loudly speak the word “BOY” or “CHILD.” They don’t necessarily obey my subsequent demands, but they appreciate my solid impression of Christopher Judge’s commanding baritone.

Several scenes depict Atreus failing at something and either enduring or fearing his father’s cold response. It also shows Kratos reaching out to the child, only to pull back his hand when the child most needs comfort. But he never once stops Atreus from crying. Atreus clearly feels shame for it, so that struggle with masculine fantasy ideal still exists, but as the game progresses, Kratos slowly comes around to understanding the importance of physical comfort as well as earned praise.

5) Always Be There to Catch Them…

There is a lot of climbing and jumping in this game, though thankfully no jumping puzzles. For almost all the difficult obstacles, the moment Kratos grabs hold of a wall or chain, Atreus immediately leaps onto his back. In some cases, Kratos must launch him up onto tall ledges, or quickly turn around to catch him when he jumps down from the same. Though Kratos struggles at first with physically comforting his son, this amusing game mechanic is also quite touching because Kratos is always there to catch him—and Atreus knows it.

6) …Even Though They Can Be Jerks Sometimes

When Atreus finally learns the truth about his origins, “I have regrets,” may be the most prominent thought scrolling through Kratos’s mind. Atreus goes from asking amusing questions about his god-nature (“Can I turn into a wolf?”) to becoming an arrogant, hot headed little jerk—basically everything Kratos feared. Despite understanding Atreus’s negative actions based on Kratos’s deception, it was no less grating to listen to and watch that teenaged audacity, as if I don’t have to deal with it from my own kids. Kratos doesn’t let Atreus off the hook for the detrimental results, but he also manages to hold his tongue and allow his son to blow off that steam, which is sometimes the hardest thing to do when kids really go off.

This game is entirely about climbing a big damn mountain, getting pushed back, and climbing some more. Repeat several times until finally making it to the top. But Faye’s whole journey forces father and son to spend more time together and subsequently brings Kratos and Atreus closer as they come to understand one another. It’s not really about the mountain.

While I don’t intend to climb mountains with my kids, watching Kratos and Atreus do it from the comfort of my bed was a great bonding and cuddles experience for the three of us.

As a parent, what more could I want from a game?