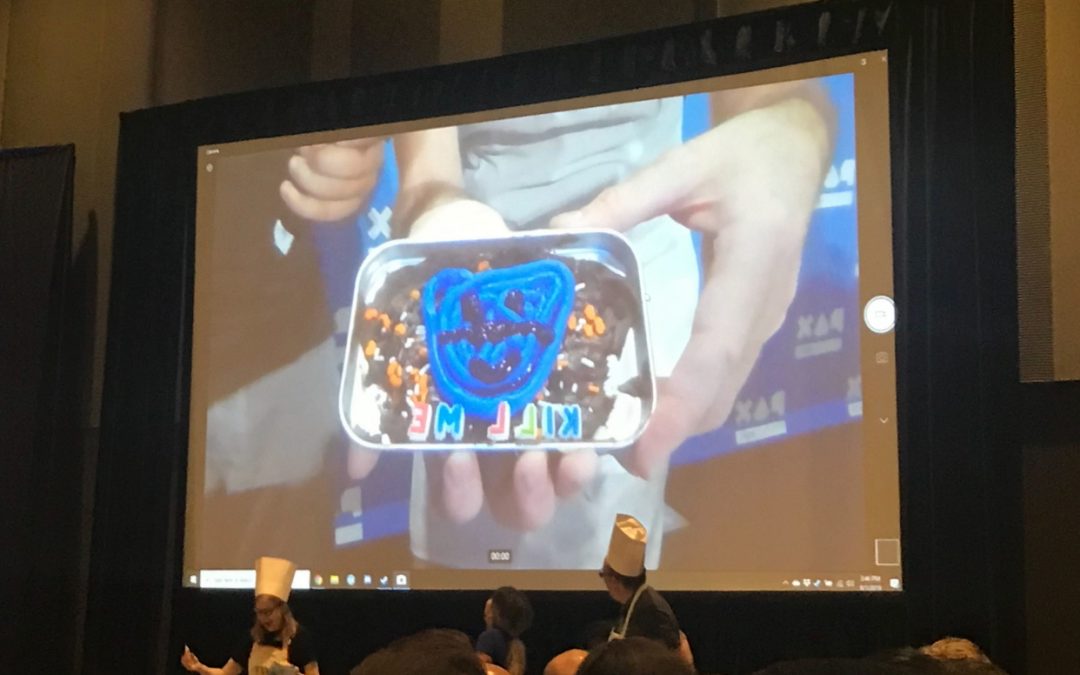 I’m not asking that in like…a high school report sense, but an existential one. Am I PAX? Are we all PAX? I don’t know. Did you know that at PAX you could play a demo of Solasta: Crown of the Magister? I do, because I got many emails about it. A fun fact about me is the more aggressive a PR person is, the more likely I am to not engage. I am petty and filled with spite.

I only did two days of PAX West this year. I showed up Friday night, grabbed my pass as the con was closing, and then returned properly for Saturday. Missy, Merri, and I very nearly did not get any Media time at all due to being fashionably late (read: we were still putting on makeup when the Media hour began), so the time we did get was spent on posing in gamer coffins.

The gamer coffins were a clever bit of marketing for the Nintendo Switch title Graveyard Keeper—I didn’t play it, because I’d been at the show for all of five minutes and I wanted to bounce around and look at everything first—but it was also a microcosm of PAX mentality in a nutshell. Lay in a coffin. Play video games. Sure, why not?

I played games, I guess? I was only there two days and I can’t remember what I did on which day. Missy played Frog Detective 2! It was cute. It has nothing to do with what I did but I’m literally drawing a blank at what happened after that. We got coffee and cookies. So many cookies. Missy yelled at me to get off Twitter after the Alec Holowka news dropped. We were in a line for a panel that I can’t remember, but I vividly remember sitting while we waited and theorizing on the couch pillow that was tucked into the exterior side of a window sill across the street, like three floors up. We still don’t know why it’s there!

What was that panel? Oh, it was about crunch! It was fine, but it was a pretty basic rundown of the concept, and didn’t have a lot of actionable information for attendees. The door squeaked as we left and there were a curiously large number of PAX enforcers hanging around outside of it. That was very intimidating, made more so by the fact that they’re still called “Enforcers.” (The nature of video game culture using aggressive language was a recurring theme with me this weekend, as it’s markedly different than interacting with comic book culture.)

We went to the party (???) for Sayonara Wild Hearts, which was a thing. It was in a theater, tiered seating and all. One of the game’s creators said a few words on stage and then introduced the game’s composer, Daniel Olsén, who played a set of music for the game while a projection of mixed graphics/ambient shapes and colors played on a screen. Eventually, a few audience members filtered down onto the stage and danced in a circle while the rest… watched, awkwardly, waiting for the experience to end so that we could each receive our free vinyl EP featuring a couple of the games’ songs. It was a bit like watching the rave kids GIF in real life.

After that, dinner, then a panel on Thirst, which was about half insightful commentary, half panelists yelling about favorite characters, including Thane Krios, Sephiroth, and the human personification of Kirby, who was referred to, and I quote, as “a generously oral bottom.”

Sunday we were a little more prepared—we had enough time to get coffee and still be on time for Media hour! Side note: if they insist on calling us, collectively, “media,” then I insist on being referred to individually as “a medium.”

Because this was Sunday, my second full day and my last at PAX, I made a beeline for the Square Enix booth. For Final Fantasy VII-R, you might be thinking. Surely Final Fantasy VIII Remastered, then? No. I finally got my chance to try out the Final Fantasy Trading Card Game. It’s been out since 2016, but I am a) a shut-in and b) too busy at all times to even think of looking for regular play matches with strangers, so my only interaction up to this point had been seeing it behind the counter at my local game store. I was, naturally, extremely interested, but I held off, because I don’t need another collectible hobby in my life, and also because I didn’t know anyone else who was interested. 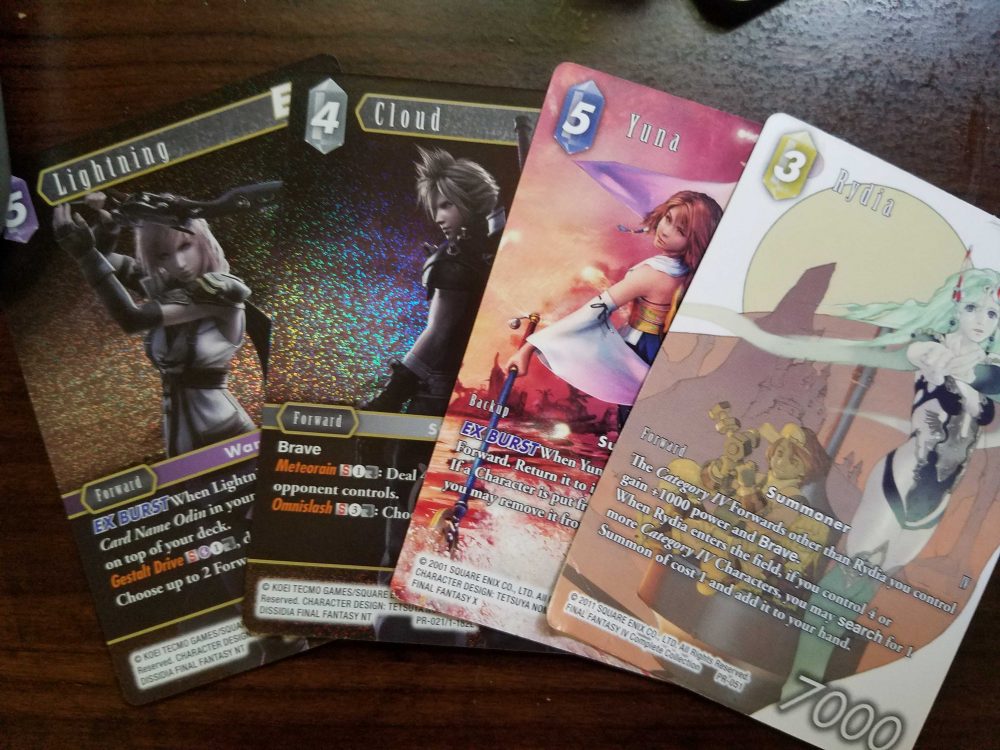 At the show, I sat down with Avery, one of their floor representatives, as he showed me the ins and outs of the game. It plays somewhat similarly to Magic: The Gathering in terms of layout and goals, but it diverges sharply with a heavy focus on resource management that reminds me more of the collaborative style of Legendary or Harry Potter: Battle of Hogwarts games. Those are both sold in box sets where you have everything you need, so to see the mechanic applied to a game where you have to build your deck is fun and interesting! There were a few free promo cards at the booth, and for playing the demo I got a few more, including sparkly (I’m assuming chase) Cloud and Lightning cards, which I loved, because I love damaged soldier children. I still don’t know if I’ll get into the hobby proper but I did like the game, so all it’d probably take is a friend of mine being like “hey play this with me.”

I also played a game called Crown Trick on a whim, and wound up really liking it! It’s described as a roguelike, but I’m not certain how true that is; the demo was more of a straight-forward dungeon crawler. It stars a girl and her talking crown. Eventually you learn how to use bombs and fire to combat your enemies, and folks: I’m real bad at staying out of the fire. Real, real bad. I’m definitely gonna pick this one up though, I liked the demo a lot. It felt kind of like Bastion, but unlike Bastion, I actually enjoyed playing it.

There was another game we found, called Liberated, that uses the Unity engine to craft an experience somewhere between a narrative game and a comic book. It was fascinating to experience as someone who is primarily a comic book critic, and from listening to the rep speak about it I have a feeling I’ll be keeping a very close eye on the title.

Merri and I played a co-op round of Wattam together and we had no idea what was going on. It was delightful, and kind of a neat bit of full-circle—my last PAX was over a decade ago, and the big game at the time was Keita Takahashi’s other famous creation, Katamari Damacy. It was a specific feeling of nostalgia, recreating this sense of confusion, delight, and wonder, and getting to do that at another PAX, fifteen years later, carried a kind of charm that I won’t easily forget.

The other two titles I was able to try out were Heaven Will Be Mine, a game I actually own but haven’t properly played because who has the time anymore, and Wytchwood, something Missy recommended I try after hearing me complain about the weird trend of male-dominated dev teams masculinizing the word ‘witch’ for games (The Witcher, obviously, and a title I saw there called Project Witchstone). I enjoyed both quite a bit—I’ll be covering HWBM at length in the near future, and as for Wytchwood, it’s a game about being an old witch in the forest, collecting things and exploring the world around you. It’s the first game I’ve actually enjoyed the fact that you can’t run in—your witch just plods along at her own pace, as a witch should.

This PAX was… weird. It was a highlight of the dual nature of games; we spend so much of our time interacting online, and it’s easy to forget that in the real world everything is… different. The week leading up, Twitter was a mass of tension after the harassment news about various game devs dropped, and while that affected the energy at PAX, it also felt like there was a singular, determined effort to celebrate games. It’s weird to do that, to celebrate love of a game like, say, Night In The Woods while also being acutely conscious of the new information surrounding the development of it, to try and hold on to what an experience can mean to you while also not devaluing the way its creation has traumatized others. I don’t have a clear, easy answer for that and I don’t suspect anyone else does, either.

It does bring me back to the question I started with though; what is PAX? Is it a trade show? A fan convention? A collective gasp of communal air for a culture that primarily interacts across networks? Is it proper to do that in the face of everything that’s going on? I don’t know. I do know that in the middle of this convention Zoë Quinn had to deactivate their twitter after Alec Holowka died by suicide. I had to carry that with me the entire convention even as I forced myself not to look at social media.