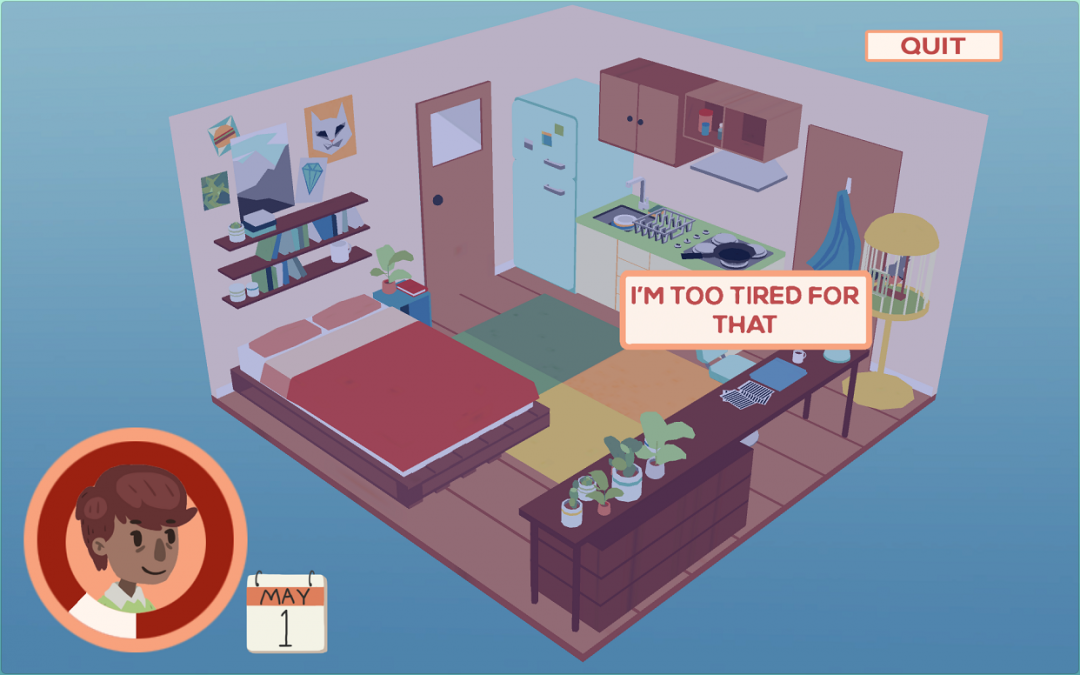 It’s been over a year since I first started experiencing symptoms of a new chronic illness, as yet undiagnosed and mostly dismissed by doctors. I’ve lived with chronic mental illness my whole life, but this is the first major chronic physical illness I’ve developed. I am fatigued all of the time, with deep muscle pain that, over the past year, has spread from my legs into my arms and wrists. When my illness is particularly bad, I cannot eat. I feel nauseous, I get cramps, I can’t stand or walk for too long. In the last twelve months, I’ve also started a master’s degree on top of work, and I’ve continued to cope with mental illness and ongoing trauma. It’s been a rough year.

After the first year of my degree ended, I turned to video games for self-care. I’ve always looked to games for healing and grounding, with titles like Everything and Journey offering soothing escapism into fantastic settings and cyclical gameplay. During bad depressive episodes, I can fire up Everything and receive a pep talk from a tree or a rock, and I’ll feel less alien in the world. During one of the loneliest periods of my life, I turned to the Normandy crew in Mass Effect for comfort and company.

Since my physical symptoms have started, however, and particularly as they have worsened this year, taking solace in games has felt more urgent. As I’ve become less able to be out in the real world, it’s felt increasingly necessary to spend time in virtual worlds, finding a sense of accomplishment and grounding that I no longer have easy access to in reality.

Earlier this year, I set myself the task of working through my ancient Xbox 360 backlog. For years now, I’ve put off going through my catalogue of games, feeling daunted by the prospect of having to play through each title. Where do you even start? This year, however, I ended up finding a new way of doing this work, motivated by my tighter schedule and fewer spoons.

I started by writing off any games I no longer felt any real interest in playing: I decided that I was never going to replay Bully and that Devil May Cry will always feel nostalgic to me, but the time to actually play it had come and gone.

After this initial cull, I played most of the remaining titles for half an hour to get a feel of the game and then abandoned any titles I wasn’t feeling. A couple of years ago, I wouldn’t have been able to imagine making decisions like these. I’m a perfectionist and a completionist, or at least I used to be. In the past, I would have felt physically uncomfortable foregoing games without even spending a few hours with them. Now, though, it takes too much time and energy to keep myself fed, to earn money to pay my bills, to shower or brush my teeth. Now, I simply don’t have the capacity to spend time on things that don’t either make me feel good or keep me alive.

In the past, I would have felt physically uncomfortable foregoing games without even spending a few hours with them.

One of the few games in my backlog that I finished was 2013’s Tomb Raider. I know, it surprised me too. As a kid, I loved the original series, to the point where I have a straight-up weird amount of Tomb Raider knowledge. As an adult though, it’s impossible for me to see the games as much more than a Rich White Coloniser Simulator. As a result, I didn’t connect emotionally to Tomb Raider and instead spent most of my time rolling my eyes and laughing at the poor narrative pacing, minimal character development, and the game’s expectation that I care about Lara, the world’s most privileged and oblivious white girl.

The gameplay, however, was perfect. I played Tomb Raider while I was heartbroken and grieving and struggling with flare-ups. I felt like my world and my body were falling apart. Tomb Raider provided me with a continuous sense of progress and forward momentum with its simple controls and straightforward level design. I could play for an hour and finish another major mission objective. I could switch off my brain without being bored. I felt like I was achieving something without wearing down my shattered body or mind. Tomb Raider gave me something to focus on while I felt totally untethered by illness and grief, and I’m grateful to have played it at the exact right moment.

Chronic illness hasn’t only triggered a shift in the way I play games, but in how I engage with video games entirely. A few weeks after I finished Tomb Raider, I had a bad flareup which coincided with catching a bug, leaving me completely wiped out for a week. I couldn’t get out of bed or eat, and ended up spending the weekend with a friend who took care of me when I was unable to take care of myself. I spent a large chunk of this time in tears from pain and mental anguish, and having an existential crisis about being chronically ill in a world designed to kill sick and disabled people. I couldn’t play console or PC games because I was in too much pain to sit up or to focus properly, but I needed a distraction. I needed to feel connected to something beyond my own pain and despair.

So instead of holding a controller, I turned to mobile games and streams. I downloaded idle sims that I could play fifteen minutes at a time, returning throughout the day to complete tasks and break up my time spent in bed. These little targets gave me something to aim towards and made me feel like I was doing something fulfilling, even if only for myself. In between these mobile check-ins, I watched Let’s Plays and streams on YouTube and Twitch. I chose four-hour videos, long enough to not have to find something else to watch, long enough to tune in and out of when I needed to lie down or close my eyes. I watched Nancy Drew videos and listened to a stranger talking through their process of solving puzzles. I listened to them interacting with their followers, other people around the world watching someone else play a video game. It made me feel less alone. It made me feel more human.

Over the last couple of months, my health has fluctuated. Although I’ve generally been able to stay mobile, I’ve had some bad days, and I keep feeling like I’m about to tip over the edge into another major flare-up. 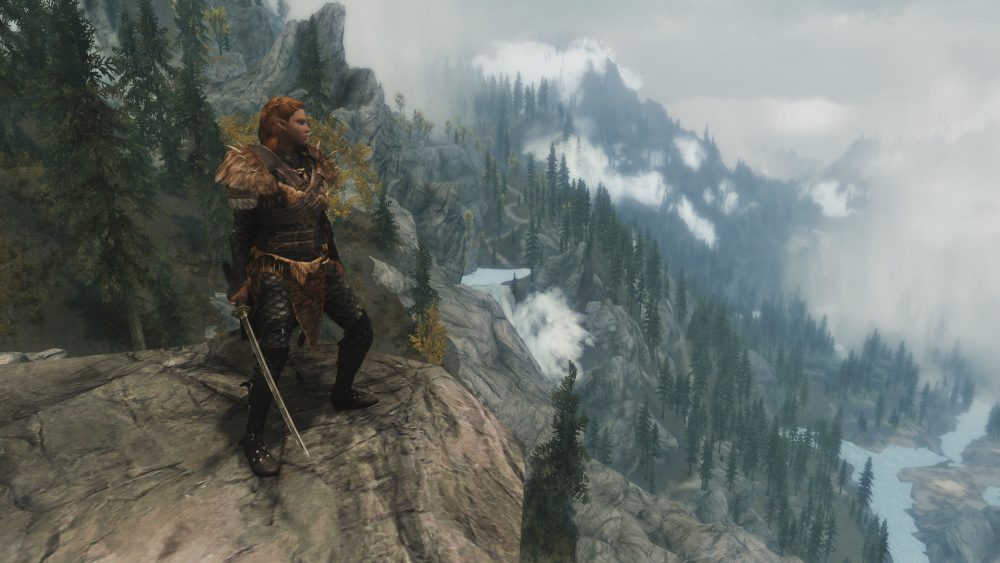 Currently, I’m using Skyrim to cope. I’m sort of replaying it; I abandoned a previous playthrough so now I’m filling in the gaps from that incomplete experience. Unlike the last time I played it, I don’t feel the need to compulsively complete every last side quest or hoard every marginally valuable thing from the dungeons. This time, I’m setting my own goals based on how I’m feeling that day. Maybe I want to check out a town I’ve never been to before. Maybe I want to mess up some bandits. Sometimes I just want to chat to strangers in a town and hear some stilted voice acting.

Changing the way I play games is reshaping how I relate to my mind, body, and illnesses. I’m slowly accepting my new limitations, although this process is absolutely not a linear one, and I’m starting to take the pressure off myself to constantly perform and produce to society’s expectations. I’m learning to be okay with being imperfect. I’m understanding how my own standards for myself are shaped by ableist capitalist white supremacy, and that moving beyond my lifelong perfectionism might be less of a betrayal to my overachieving Virgo ass, and more like compassion for my ambitious, tired, chronically ill self.

I’m still afraid. I still feel intensely isolated, especially on the days when I can’t get out of bed. I am still railing against the fact that, simply by existing as sick or disabled in our world, every day is a fight, and we are already too exhausted. But games bring me possibility: worlds to explore, people to talk to, a sense of achievement. Games allow me to feel connected to other players by streams, and they help me to feel more connected to myself.

Gaming is teaching me to shift my priorities towards what actually interests me and sustains me. I’m no longer fussed by a 100% completion rate. Instead, I want to spend time with games that captivate me, that resonate in some way, that are meaningful to me, because my time and my energy are precious and finite. My relationship with gaming is changing. It’s opening up and I’m stepping away from completionist tendencies and external expectations. In this change, I’m finding hope that there is a way for me to exist in the world on my own terms.