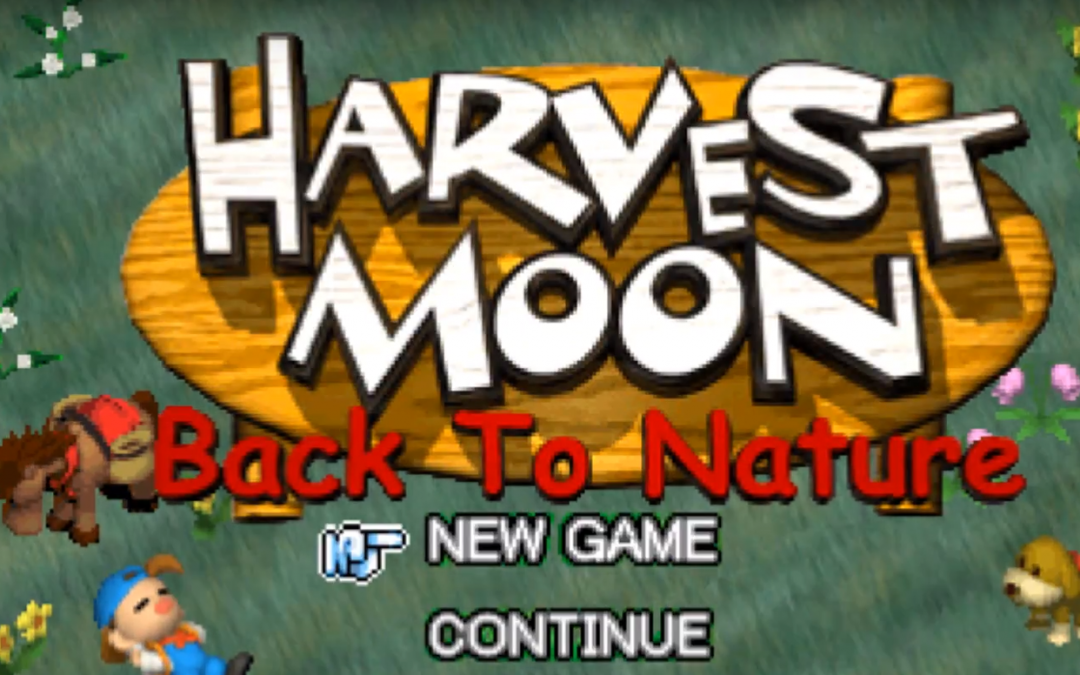 The earliest memory of my first game is sitting on the cold, hard, ceramic floor as a child, watching my older sister play our PlayStation 1. I remember a farmer running from his farm to pick up some herbs and bamboo shoots from the deep green ground by the blue waterfall near the entrance to the Spring Mine. There were two pretty girls walking around—one had bubbly pink hair, and one had her orange hair braided. My eyes were glued to the TV screen.

That time, I didn’t understand what the farmer was doing, why he had to carry an item over his head, why he didn’t just save it in his rucksack. Every time I asked my sister, she would grow annoyed—I kept asking the same questions over and over again after she had answered, trying to find certain answers that were unclear to me. Somehow, despite my lack of understanding of the game, I cherished the pink-haired girl, Popuri, who the farmer often spoke to because she has a cute smile and could be a spoiled crybaby. My child self saw herself in her. 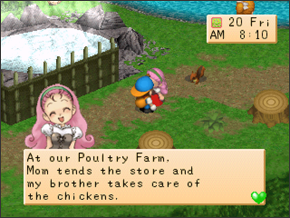 One day, when my sister had not come to the family room, I started the game, attempting to play it myself. I discovered that the title was Harvest Moon: Back to Nature from the game disc. I also saw a beautiful blonde girl, whose name I later learned was Karen. I have always had a crush on her because of her confidence and maturity, without clearly realizing it until my late teenage years. Before I even pressed ‘O’ for a new game, my sister shut it down.

“I want to play!” cried five-year-old me, begging on the floor as my sister placed the disc on a place I couldn’t reach. She was paranoid that I might destroy her save file. Memory is an unreliable thing—maybe I had indeed pressed for a new game and did overwrite her save file.

Because I was terrified of angering my sister again, I didn’t play it until when I was around 10. In those years of not touching the game and simply observing the play, I witnessed her not doing well—her farm was underdeveloped, and her house and rucksack were not upgraded despite already being in the third year in the game, all because Her “Kurama” was so sickly in love with Popuri that he became an incompetent farmer that his dead grandpa would have shaken his head at in disapproval.

Our parents bought us a pink-colored PSP because of my high grades in elementary school. One of the games we purchased was Harvest Moon: Boy & Girl. I remember rejoicing in delight that I could finally play as a girl.

The boy version is exactly the same as Back to Nature on PS1. However, the girl version contains new content and events, such as a mirror on the wall of your farmhouse, the beauty level of your farmer determined by how many stars on your start menu, a beauty box to deposit jewelry and a dress, and heart events of the bachelors, who could end up being the person who saved you in the game’s beginning, depending on which person you marry.

The truth is that I was never able to finish the game until now. Playing both the boy and girl version, I have never reached marriage due to my short attention span and horrible financial strategy. I returned to the old way, lying on the bed in the evening under our bedroom’s white light and experiencing the game through someone else’s, particularly my sister’s, lense.

This doesn’t mean I don’t have my own lone experience. When I played the girl version for the first time, I was head over heels for Doctor, whose heart was hard to attain as my farmer often passed out. It was saddening when his heart color dropped to black with my farmer lying on the clinic’s bed. My farmer never married him because I decided to start a new save file to pursue Kai, the boy who visits Mineral Town every summer. After another new game trying to woo Gray, the blacksmith’s grandson, I quit playing the girl version and returned to Back to Nature/the boy version to chase after Karen instead. I didn’t complete that either.

When my sister had reached the fourth year in the game, with her farmer married to Ellie, the nurse of Mineral Town, I watched the ending with her. It was glorious; villagers hailed her farmer as a hero in the town square. Afterward, the farmer and Ellie went to the beautiful, deep green flower field near the mountain to reminisce about their childhood, when they met for the first time and sang together. The farming never ends after such a sweet epilogue.

The girl version is a different story. Once you’re already married to a bachelor, you have to follow your husband into the future. In my sister’s save file, she married Cliff. After the wedding, her farmer joined him in managing the winery instead of farming. The end. As a child, I thought it was normal and even romantic for a wife to follow her husband’s footsteps after marriage. I accepted it without much thought. My naïve self dreamt of such “love story.”

After our PS1 and PSP were taken away, my sister and I played newer games from the Harvest Moon series, but none of them felt as impressive and as memorable (except for A Wonderful Life). The strongest memory I have was being able to complete Harvest Moon: DS Cute on our 3DS by saving all Harvest Sprites and marrying Skye, the mysterious thief who’s the most good-looking man and the most intriguing character in the game—with the help of cheats. 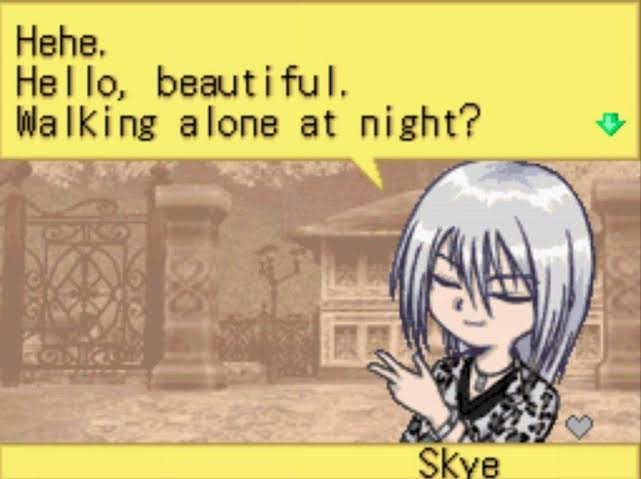 During my family trip to Europe two years ago, my sister and I would joke about how some scenery looked as if it was out of Harvest Moon games. The cheerful sun, the mountains surrounded by clouds, the lakes and small towns we passed, the refreshing hills with wild white and yellow flowers among the grass, which resembled Moondrop and Toy flowers from the game. Nature was purifying like the waterfall near the Spring Mine that cleansed negative emotions away. We tasted some fresh farm goods and talked about how idyllic it would be to live like the farmer from the series, away from real-life responsibilities, metropolitan craze, electronic gadgets, and the internet. It’s one of the things that has strengthened our bond despite our differences.

One year ago, out of the blue, I was reminded of the game. I borrowed my cousin’s PSP to indulge my childhood during a rainy evening in my hometown. Once I began playing again, I saw my current self in Mary, the dark-haired, glasses-wearing librarian, a bookworm in the process of writing a novel. Many things have changed since my childhood. I’m no longer a spoiled crybaby like Popuri.

While I was playing, I began formulating words inside my head I have forgotten in detail. I couldn’t stop comparing the characters of this game to the characters from the newer games in the Harvest Moon series. The reason why the newer games paled in comparison to Back to Nature despite having new features (diverse farm goods and animals, free customization of your farmer, dating system, etc.) is that the characters from the newer games don’t have the darker depths of the characters from the older games. They have begun lacking in the dimensions needed to be interesting characters. Where are characters like Duke, who likes to drink in the evening to cope after being left by his daughter? Or his wife, Manna, who indulges in long chit-chats to bear loneliness, considering how unreliable her husband is? Another great example is Cliff, who suffers from depression and social anxiety with a bleak past. Each character in Back to Nature has a relatable, personal problem that leads to character development, influenced by your relationship with them and the time spent inside the game. Harvest Moon is indeed not a game series to seek character depths, but noticing them has deepened my appreciation for the game.

On the other hand, I’ve opened my eyes to the noticeable, old-fashioned gender roles within Harvest Moon: Boy & Girl, although it’s understandable considering its year of release. After the realization and acceptance of my own bisexuality, I noticed the lack of representation and options for LGBTQ+ players in the two-decades-old game series, despite having promised to bring same-sex marriage sooner or later. The series hasn’t been progressing in those areas, while their current main competitor, Stardew Valley, inspired by Back to Nature itself, allows gay marriage as all marriage candidates are bisexual. I still love Harvest Moon: Back To Nature. While it makes sense that it lacks options for LGBTQ+ players as the game was released before the 2010s, I still have this wishful thinking to romance the girls in the game as a girl.

I’m glad that this current generation of games delivers more representation of marginalised groups. Since I’ve seen more pieces of media that portray people like me in these recent years, I’ve grown to care about this more and more. Sadly, this series is quite left behind in this aspect. As a player, I feel that it’s time for me to move on and find another game that is willing to provide representation until the series decides to show progress.

A Chinese Indonesian student studying in Sydney, who is passionate about writing and her favorite video games