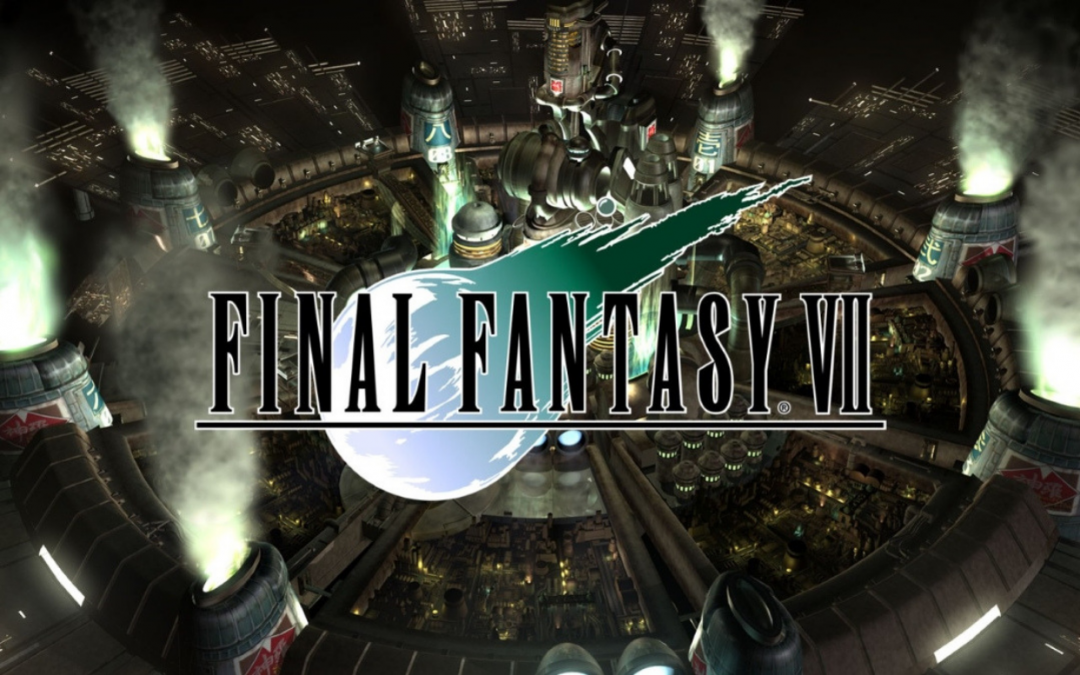 I own Final Fantasy VII on three separate platforms. That’s not really notable for me as far as Final Fantasy is concerned; I own most of the games on at least two. But with VII’s release on the Nintendo Switch a couple of months ago, and now with the announcement of Final Fantasy VII Remake, it’s been on my mind. It turns out the Switch is the perfect platform for a replay; the smaller, hand-held screen hides some of the game’s age from my own aging eyes, especially if I’m not wearing my glasses. But I’m not really here to review the game; I don’t really think there’s a point to that. I mean, we have a release date for the remake now, right? VII is beyond reviews. It’s simply a phenomenon.

Instead, I found myself thinking about how… well-timed all of this is. In 1997, the world of Gaia, the game’s setting, seemed like—well, pardon the term—a fantasy. The structure of Midgar, a two-tiered city that was about as subtle a commentary on class divide as a brick to the head, a community that required eight Mako (read: nuclear) Reactors to keep running, nevertheless seemed like something far beyond what we would see here in the real world to my then-fourteen-year-old eyes. Mako is, in the game’s terms, the “life-essence” of the planet, harvested in a non-sustainable fashion to power Shinra Corp’s technological wonders. 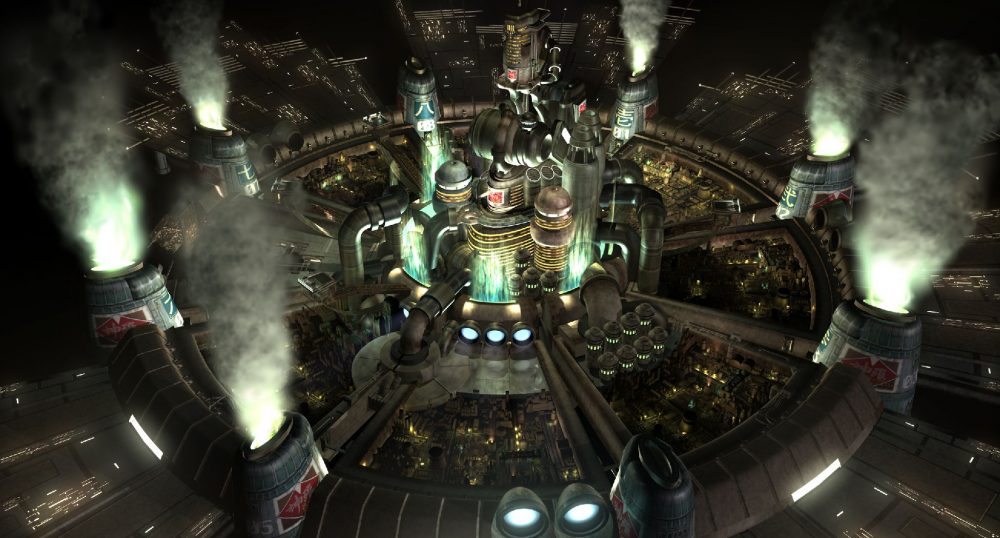 The city of Midgar and its eight Mako reactors.

The game opens with a group called AVALANCHE, including the player’s first two party members, Barret and Cloud, bombing one of those eight reactors as a wake-up call. It felt odd, twenty-two years ago, to be playing these characters who were meant to be heroic, but who would engage in such tactics. The dire situation of the world they lived in assuaged some of that, but not all of it, at least not then. Final Fantasy VII unreservedly calls its protagonists “terrorists,” something that wouldn’t really be remarked on in 1997, but which was an unabashedly political statement: after all, the 90s were the time of significant pieces of legislation directly relating to the rise of “eco-terrorism.”

As a result of their actions, conflict within the city escalates to the point that Shinra Corp, the company that owns Midgar in all but name (there is a nominal mayor, useless as he is), destroys an entire sector of the city, causing countless deaths in their pursuit of the members of AVALANCHE. This necessitates the surviving members’ escape. The first sight of the land surrounding Midgar as Cloud, the game’s lead protagonist, and his cohorts exit the city gates, specifically the blight of that land, was a shocking thing. It was a clever bit of storytelling, a ring of death surrounding a city that can’t stop consuming.

As you progress through the game, the struggle between the empirical Shinra and the rest of the world’s communities is made apparent; there is not a single town you pass through that isn’t affected by their greed, their unfettered capitalism. The nearest town to Midgar, Kalm, is quiet, is sleepy, and seems like nothing’s wrong, but its danger is implicit as the town is trapped between expanding regions of dead earth. Soon, there will be no place for anything to grow.

The next town over is Junon, a fishing village overtaken by a city development grafted onto it, the sci-fi concept of a cyborg in the form of a town. It is here that Shinra hosts a military parade (yes, a privately-owned military) to stir up devotion and patriotism. Junon is also home to a truly absurd cannon, a massive thing that is, of course, Mako-powered. The blight is evident in the area surrounding this town, too, but there are even more immediate reminders of encroaching doom—Shinra’s urban development blocks the sun, casting the original Junon in perpetual shadow. Shinra’s support scaffolding for the Junon cannon fills the water off the town’s shore, preventing the use of boats and the fishing that used to drive the town’s economy. The few folks who still live in the old town are scraping by in ramshackle huts. The only sea access is gained directly through Shinra’s own docks. 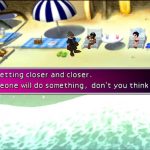 A sunbather in Costa Del Sol. 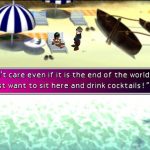 Just let her drink her cocktails!

Across the water, a different story is painted. The first town you visit is Costa Del Sol, a seaside resort where everything is calm and placid. It’s a lovely town; you can even kick a ball around with some kids! It’s so lovely, in fact, that the rest of the world’s struggles seem, well… a world away. Even the townspeople remark on it, not wanting to be bothered with the world’s concerns. Surely someone will do something!

It’s not long after that the party finds itself at Golden Saucer, an actual resort, with mascots, theme music, rides, games, and its own internal currency. Golden Saucer is, of course, an ersatz Walt Disney World, built on the exploitation and death of a nearby town named Corel, another example of capitalism run rampant. This one wears a genial face. It’s a happy place, after all! It reminds you of this as it charges you (in Golden Saucer currency, naturally) to use its save point, the only one in the game that carries a cost associated with it. Golden Saucer also has a literal concentration camp beneath it; your party is sent to it at one point during the game. It’s worth noting that all of this is incidental to the actual plot of the game—it’s just the framework! 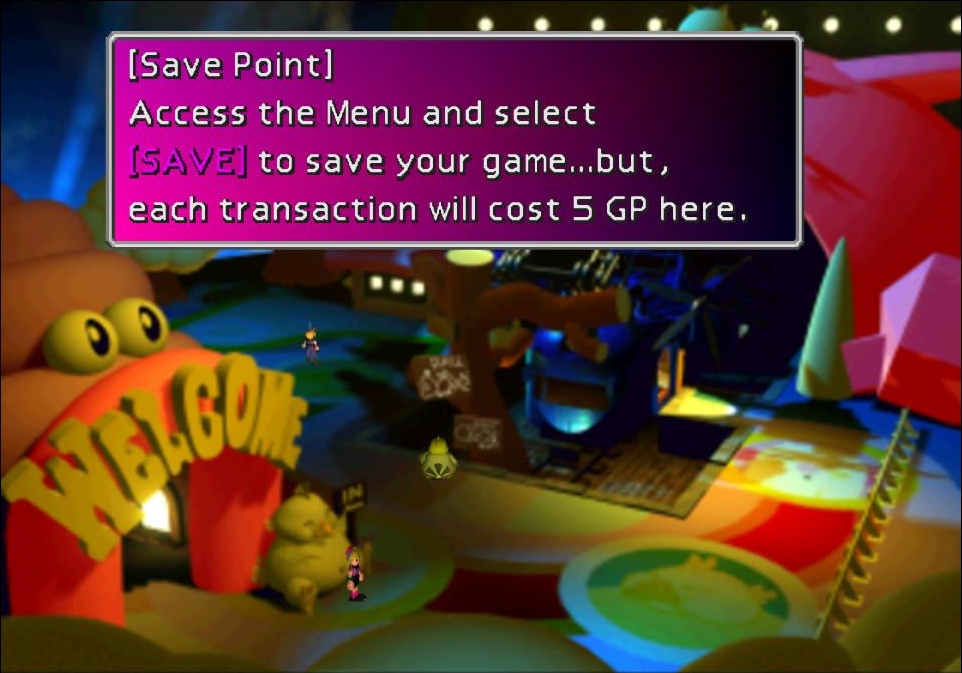 GP is distinct from Gil, which is the game’s *actual* currency.

It’s not just the geography and anti-capitalist ethos that powers FF7’s politics, though. The game’s use of Weapons—giant, ancient kaiju that rise from the earth over the course of the plot—was exciting to witness, but my teenage self lacked the understanding of the metaphor behind kaiju genre conventions then. The Godzilla stand-ins are, like the original, an explicit commentary on the use of reactor power (Mako reactors themselves being very obviously based on nuclear science), but this wasn’t a thing I knew or really understood then. The whole of the game was, to me, a fun ride where a group of freedom fighters rode to stop an apocalypse brought about by a bishounen megalomaniac summoning a comet.

Now, of course, it’s 2019. Current news reports paint a grim picture; an extinction event looms within the next 30 years. Fascism is on the rise; corporations have become massive, unwieldy things powered by unfettered greed, finding ways to mine our way of life for every last cent; large swaths of the voting populace are committed to a combination of useless centrism and apathy in the hope for a nice, peaceful solution to the world’s problems that they don’t have to actually lift a finger for.

President Shinra, in the game, is after a foretold “Promised Land,” which is something he thinks is an actual place on the planet that has yet to be located, an untapped well of exploitable resources. He’s willing to kill or maim anyone (or have them killed or maimed, he doesn’t do the dirty work himself) to find it. It seemed absurd, then, his engagement and use of genocidal tactics, human rights violations, etcetera, but now? Now we have a political party in America with prominent members who devoutly believe in the Biblical Apocalypse, and what’s more, believe that it is coming soon, that they can hasten it.

Final Fantasy VII is about us, even more so than it was in 1997. The world of Gaia is our world; we may not have real kaiju or long-haired pretty boys with weird alien virus moms, but we do have a world in which corporations view us only as assets to further their profit. We do have governments who stage displays of military might in front of apathetic townsfolk even as they crush the local, sustainable economies of those towns. We do have warm, summery resorts where people pretend nothing’s wrong. We don’t have a team of radicals with absurd swords and gun-arms in an airship, but like Barret and Tifa do with Cloud, we do have to constantly teach those around us the value of caring about things, of stepping up to do the work if we want those things to last, if we want to have a future.

Final Fantasy VII is important to me. It’s powerful. Not just because it’s a game that holds a lot of nostalgia value, but because it contains a narrative that was honestly and absurdly prescient. It is a parable about humanity realizing too late the damage they have done and a few brave souls doing everything they can to fix it, knowing that they might not (and probably won’t) succeed. The ambiguous nature of the ending is similarly important; I find myself wishing that Square Enix had never revisited the game’s world in sequels. After all, like Cloud, Tifa, and Barret, we won’t know the fate of our world’s future until we get there. 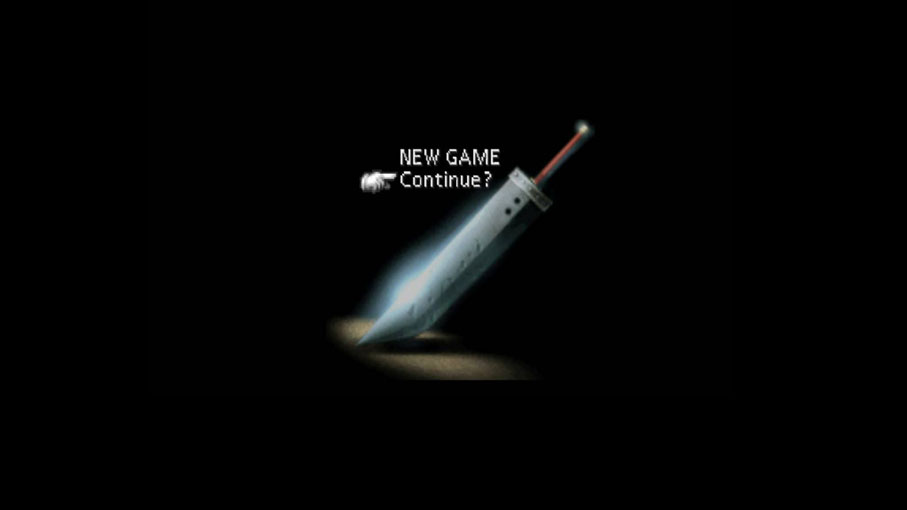