Grow Up: Marvel’s Spider-Man Proves We Need Real YA Games 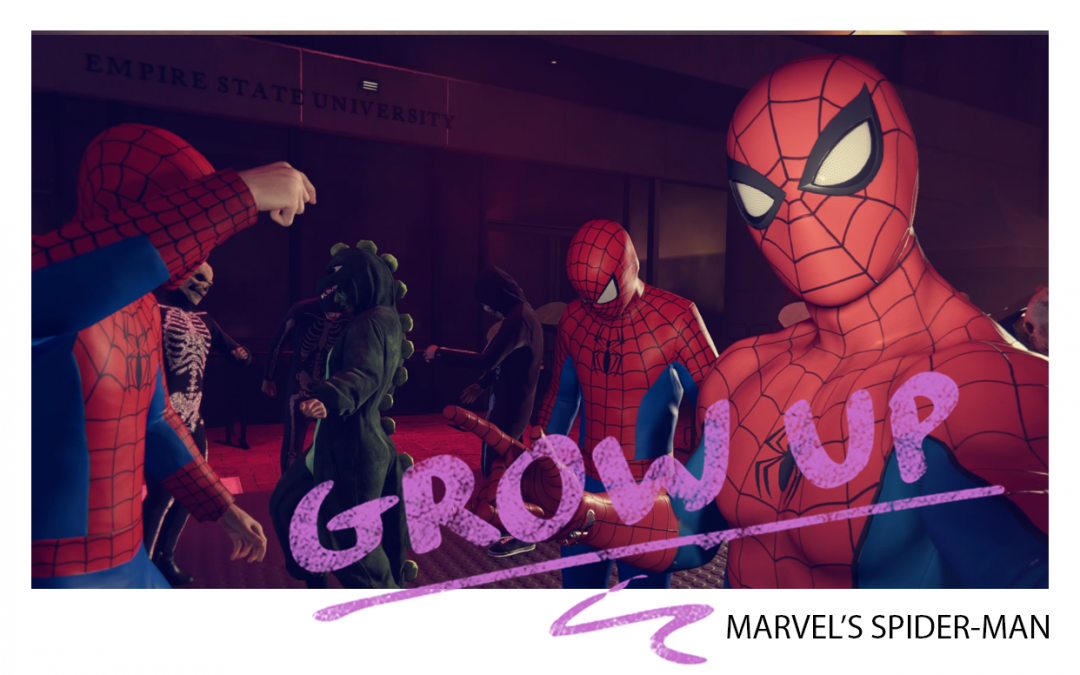 Around the time I was first kicking around the idea of this column, Austin Walker, in a 2018 Waypoint Radio episode, suggested that Marvel’s Spider-Man was the first real AAA example of young adult games, following on the industry’s obsession with dad games. After all, it follows a young man who must balance his heroics with real-world concerns like how he’s going to pay rent, his fraught relationship with his ex-girlfriend, and coming into his own as a real adult. He’s an earnest, unrepentant do-gooder, and as I’ve mentioned in previous entries of this series, that sense of earnestness, of doing good, is one of the main appeals of young adult fiction for me.

But Marvel’s Spider-Man, despite being a story about a literal, actual young adult, is not quite YA.

YA is generally intended for ages 12 to 18, with stories exploring themes relevant to that period of development: coming of age, personal responsibility, getting into trouble, individuality, life and death. Certainly, some of those things are at play in Marvel’s Spider-Man, but that doesn’t inherently make it YA.

Why does this matter, though? Why bother debating whether or not Spider-Man is a YA game? Isn’t this all useless pedantry?

Well, yes, a little. There’s a misunderstanding of what YA is that goes beyond games into culture as a whole, particularly because the genre is so often said to be juvenile—read: immature—when in fact it’s just for a different audience. But this does matter, because by misidentifying Marvel’s Spider-Man as the first AAA young adult game, Walker has raised an important question: where are AAA young adult games?

Though we think of games as being for everybody, that simply isn’t true. This game isn’t YA, but it’s easy to think of it that way because it’s actually dealing with the struggles of young adults, despite it having little to do with the young adult demographic. If we can mistakenly identify this as the first YA game, that says a lot about how well that audience is being served.

Worse, the game’s lack of thematic cohesion (sorry ’bout it, but Spider-Man sends some mixed messages about things like community involvement and the police, and seriously, Parker, you get a fucking job before you snark at others!) speaks to some rather frustrating assumptions about YA—namely, that they are more plot than character-driven, and that they value the satisfaction of ticked boxes (first kiss, standing up to authority, “the real magic was the friends we made along the way”) over any deeper thematic meaning.

I’m not suggesting that all of this was crammed into Walker’s statement about Spider-Man; clearly, he meant it as a positive. But it’s telling that so many of us swallowed that statement without question. It’s as much genre illiteracy as it is genre assumptions. We can’t know it’s not YA if we don’t know what YA actually is, and the assumptions we make (based primarily on successful YA franchises, typically those that get made into movies, like Twilight, The Hunger Games, and the entirety of John Green’s oeuvre) tend to represent a very narrow slice of what YA is and does.

In fact, Marvel’s Spider-Man has a lot more in common with the emergent new adult genre, which is targeted at an older audience and explores themes like post-high school friendships, financial independence, loss of innocence, fear of failure, and exploring empowerment. This is good, in my opinion—too often we see the path from young adulthood to established adulthood and stability as a linear, easy-to-tread path. It isn’t, and games like this one get that.

In essence, calling Spider-Man “young adult” when it isn’t does nobody any favors. It suggests that the game’s storyline is for young audiences, and while they might enjoy it regardless, Spider-Man, like most games, is targeted at an audience in their twenties. To call it “young adult” suggests that this is what YA looks like—it’s not, because Spider-Man focuses on adults and complications of identity rather than the forming of it. Peter’s split identity as Spider-Man/Peter Parker is already eight years old, and though he experiences some big life changes, like losing his apartment and the potential loss of his research assistant position, those are adult concerns. 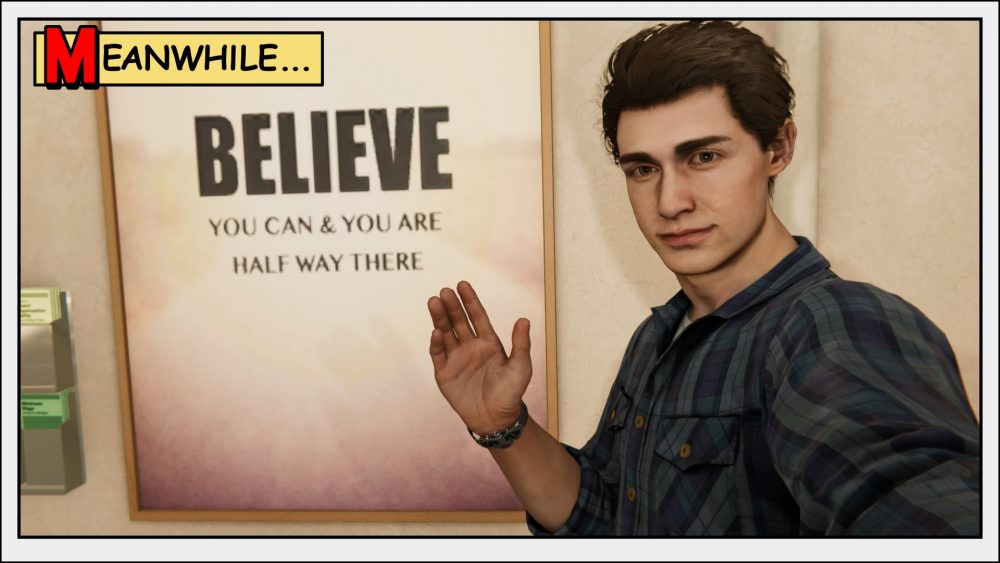 In fact, I’d argue that those specifically adult concerns are central to the game’s themes. It’s not that Peter’s learning to be an adult, but rather that he’s learning to be a better adult, one who doesn’t see the world entirely in black and white, who experiences the betrayal of beloved assumed truths about the world. We don’t know exactly why Peter and MJ didn’t work out in this universe, but it probably has something to do with his lack of maturity. Though Peter is undeniably a good person who acts with kindness and compassion, he’s not very good at… we’ll call it work-life balance. Being Spider-Man, understandably, makes up most of the gameplay, but it’s clear from his interactions with the people that matter to him—MJ, Dr. Octavius, Aunt May—that it makes up most of his life, too. Where does that dedication leave the people he cares about? How can they know for certain that he cares?

Part of Peter’s journey throughout the game is expressing that caring by stepping away from constant heroics. He has to let MJ be MJ, a hero in her own right. He has to accept that he can’t save Dr. Octavius, who makes his own choices. He has to accept that he can’t save everyone, including Aunt May. In fact, he has to choose between saving May, a single very important person, and saving the rest of those infected by Devil’s Breath, a toxic gas—the single dose of the antidote they have can save one person now, or potentially hundreds if it’s replicated. He chooses the city; because he’s the hero, there isn’t an alternative.

Calling Spider-Man “young adult” suggests that games that follow this mold are serving an audience that they are not—teenagers are a not insignificant portion of the gaming audience, regardless of gender. If games are for everyone, as we often argue they are, where are the games specifically for them? Not the games that can appeal to all audiences—Mario, Fortnite, even Pokémon—but the games that are made specifically for teenagers?

Largely, they are not AAA. And, unfortunately, “not AAA” means that they’re not often getting into the hands of the audience they’d best serve. Games are expensive, platforms even more expensive, and even when games like Gone Home are routinely offered for free with subscriptions, that counts on the audience knowing what Gone Home is and that it’s for them. For the most part, we don’t have YA games labeled—it’s a category that doesn’t really exist, that’s often misunderstood and misrepresented in the press.

If we keep suggesting that games like Spider-Man are young adult, we’re not honoring that audience as being unique, separate, and deserving of games that emblematize their individual experience of the world.

Games are for everyone, in theory. In practice, they are for distinct groups—children, adults. There is little for the true young adult, the 12 to 18 demographic, to experience in video games that is specifically for them; they can enjoy any kind of game, but very little speaks to the experience of being a teenager the way that young adult literature or young adult films might. And though Spider-Man is a great game that does strive to capture what it means to be both young and an adult, it is still not young adult.

But it could be, and I hope, as I continue this series, I’ll find something that is.

Read the rest of the Grow Up series.