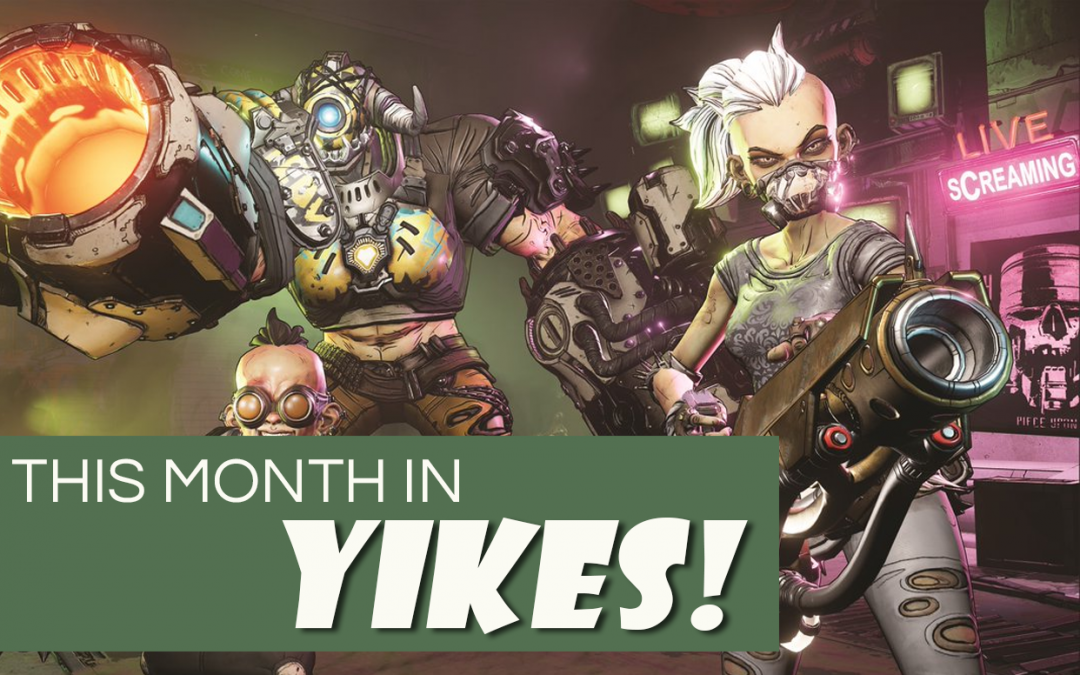 Welcome to This Month in Yikes, a new column where we round up the worst behavior of the month in a single column. From sales gone awry to the evergreen issue of harassment in video games, May felt especially long and fraught with drama.

We began and ended May with some news from Gearbox that dotted the spectrum from strange to terrible. Here’s the rundown on that and everything else that occurred in the middle of the Randy Pitchford sandwich.

Game Informer chose to make a click bait tweet that muddied and confused the situation. I hope I have clarified it for you. @GI_AndyMc pledge to correct issues with their reporting, but I have seen no evidence of that yet.

Gearbox CEO Randy Pitchford, who made news early in May for directing a bizarre tweetstorm at Game Informer over microtransactions in Borderlands 3, was accused of bullying and assaulting a former employee just a few days later. In an interview with Newsweek, Claptrap voice actor and former Gearbox VP David Eddings explained his departure from the role, saying Pitchford physically assaulted him in 2017 and fired him a few days later. This is the same Randy Pitchford who is part of an ongoing lawsuit in which he is accused of misusing company funds and leaving a flash drive full of “barely legal” pornography at a restaurant.

Fortnite Players are Bullying Other Players Over Free Skins

Though Fortnite is free to play, players can use real money to purchase different weapons and skins. However, Polygon’s Patricia Hernandez reported players with default skins are targets of harassment and bullying, especially among middle schoolers.

Violent Games Take a Mental Toll on Their Developers

Mortal Kombat 11 (the latest installment, which includes the lackluster voice acting talents of Ronda Rousey, who has previously made transphobic remarks and reposted conspiracy theories) took a mental and physical toll on some of its developers, according to a report by Kotaku’s Joshua Rivera. In that report, a cinematics developer described harrowing recurring dreams and shared they received a PTSD diagnosis—a side effect of making incredibly violent games that many of us probably don’t think about.

lol who even are you

Before Bethesda even released Rage 2, it was picking fights with journalists seemingly because many people didn’t realize there was going to be a Rage 2. The game released on May 14 to middling reviews, but a Polygon essay by Chris Plante brought another issue to light: Rage 2 still uses a common birth defect as shorthand for subhuman “mutants” who Rage’s humans ride and hunt for sport. One mutant is even featured as a Big Mouth Billy Bass-style bust in the collector’s edition, despite studio director Tim Willits apologizing to Plante in an earlier interview and saying the team would reconsider the insensitive depiction.

Last year, five women filed harassment lawsuits against Riot Games, and in April, Riot attempted to move some of those cases to arbitration. Less than two weeks after employees staged a walkout protesting this move—which would keep the disputes private and would likely bar these employees from filing other suits—Riot followed up by announcing it would not let employees opt out of arbitration policies until litigation is resolved.

Sorry to all those offended by one of the responses sent out from our account earlier. Harming anyone was never our intention.

In an interview with Kotaku’s Jason Schreier, CD Projekt Red co-founder Marcin Iwiński promised the company would be “more humane” to its employees by not forcing them to work crunch as development progresses on its upcoming Cyberpunk 2077. This would be a big step for CDPR, a studio with a notorious reputation for crunch, though Iwiński did not outline any specific policies. He also said he prides the company on “treating gamers with respect” and wishes to do the same for developers, though perhaps he has forgotten the company’s history of transphobic tweets and its subsequent non-apology.

Hey folks, today let's talk about the Epic Store sale, and why it's pissing off gamers and developers/publishers alike. Because it's easy to snark and say "lol, the Gamers™ are angry about a sale!" but this is a good deal more serious.

To understand why, let's talk about sales! pic.twitter.com/AwPuf7HI7k

The Epic Games Store offered an extra $10 off any game over $15 during its first sale, which even included preorders for Borderlands 3, Bloodlines 2, and Oxygen Not Included. These were soon removed from the storefront, while other titles underwent multiple price changes, making it seem like developers didn’t have warning or a clear opt-out. As Twitter user @CaseyExplosion pointed out, the extra discount devalues games and may threaten other platforms like Steam. The problems didn’t stop there, as gamers reported Epic locked their accounts if they tried to purchase multiple games during the sale.

Though Dota 2 is free to play, players can purchase a premium subscription in the form of a “Battle Pass” that offers exclusive rewards and features. According to a report by T.C. Sottek at The Verge, this year’s Battle Pass includes an experimental feature called “Avoid Player” that allows gamers to, you guessed it, avoid specific players. Not only is Valve is prioritizing harassers over other players’ comfort and safety, but it’s also monetizing harassment—Valve certainly isn’t incentivized to handle harassment when it can charge extra for this basic service.

Publishers Pay Influencers to Stream but This Time it’s Not About Ethics in Games Journalism, No, Seriously

As part of its anniversary event, Overwatch released new epic and legendary skins, some of which have been well received (gargoyle Winston is very cool) while others are… certainly… a choice. Jeff Kaplan promised an internet-breaking skin for D.Va, which turned out to be a school uniform that, regrettably, did not break the internet and end our suffering once and for all. Brigitte gets to play dress-up as a Swedish riot cop, which as Dante Douglas at Vice Games pointed out, recalls the riot cops who fire tear gas and rubber bullets at peaceful protesters in the United States.

Finally, you may remember Mei’s 2017 Lunar New Year skin, which made her waist appear dramatically smaller and gave her an exaggerated hourglass figure. The Overwatch team chalked it up to a bug and the model was updated in a patch, but Mei’s new anniversary skin—a cute, colorful waitress outfit—gives her the same exaggerated hourglass figure and shelf butt she had in the Lunar New Year outfit.

This, of course, isn’t a dig at anyone with an hourglass body type. It’s just disheartening to see Mei, whose design has always featured a thicker waist, repackaged in a way that fits traditional beauty standards. Alongside D.Va’s school uniform, the shift to an entirely different body type feels less like the inclusive game Overwatch has always billed itself as and a more of a “wink wink nudge nudge” move meant to cater to a specific subset of fans.

The Washington Post (which is owned by Amazon CEO Jeff Bezos’ company Nash Holdings) reported that Amazon is now using games to “reduce the tedium of its physically demanding jobs.” Warehouse employees are rewarded with points or other bonuses for completing tasks throughout their shifts. Other companies, especially rideshare services, have also used gamification as a way to encourage their employees to work longer and more efficiently.

Regarding the awesome Playdate Pop-Up at @playdategs: a year ago we wrote them an e-mail, worried that our product might overshadow theirs and make their group hard-to-find. But we have no problem with them using the name Playdate — and we hope they keep using it!

Panic Asked an Indie Games Showcase to Change its Name

After Panic’s announcement of a new GameBoy-esque console called Playdate, game developer Nathalie Lawhead wrote in a blog post that Playdate-the-console asked Playdate, a queer, feminist games showcase that has been part of the LA Zine Fest for several years, to stop using the name. It wasn’t a cease-and-desist, but it was a bully move that reinforced a status quo at the expense of an event that prioritizes marginalized developers. Playdate responded in a tweet and appears to have backed off.

In an investigative piece published by Kotaku, former Rockstar developer Colin Bundschu recounted how Jeronimo Barrera, Rockstar’s former vice president of product development, groped him at a team event at a nightclub in 2014.

Randy Pitchford, Who is Still the CEO of Gearbox Despite the Entire Month of May, Hired an Accused Abuser for a Voice Acting Role in Borderlands 3

Randy Pitchford’s latest Twitter antics include retweeting an animal abuse video, and though the video has been removed from Twitter, his tweet about it is still up. (Warning: The link contains graphic content, please click with discretion.) A mere three days after this incident actress, Chloe Dykstra called out Gearbox for hiring her ex, Chris Hardwick, as a voice actor in the upcoming game. Dykstra previously wrote about her experience as a survivor of an abusive relationship in a June 2018 Medium essay, in which television personality Chris Hardwick was implicated but not named. Hardwick also voiced a character in Tales from the Borderlands (2014).

During a Things From the Flood game at the UK Games Expo (a paid, ticketed event) GM Kevin Rolfe began the session by putting the game’s characters—who are meant to be teenagers—in a scenario where they were kidnapped and sexually abused without warning players beforehand. In a statement, UK Games Expo issued an apology, canceled Rolfe’s other games that weekend, and banned him from submitting games at future events.

And, some good news: Carl “Sargon of Akkad” Benjamin, a far-right Youtuber who gained attention during Gamergate before pivoting to politics, was not elected to the European Parliament. He ran as a member of the UKIP party, which lost all twenty-two of its seats in Britain.