Two Years Later, Night in the Woods is Still Relatable 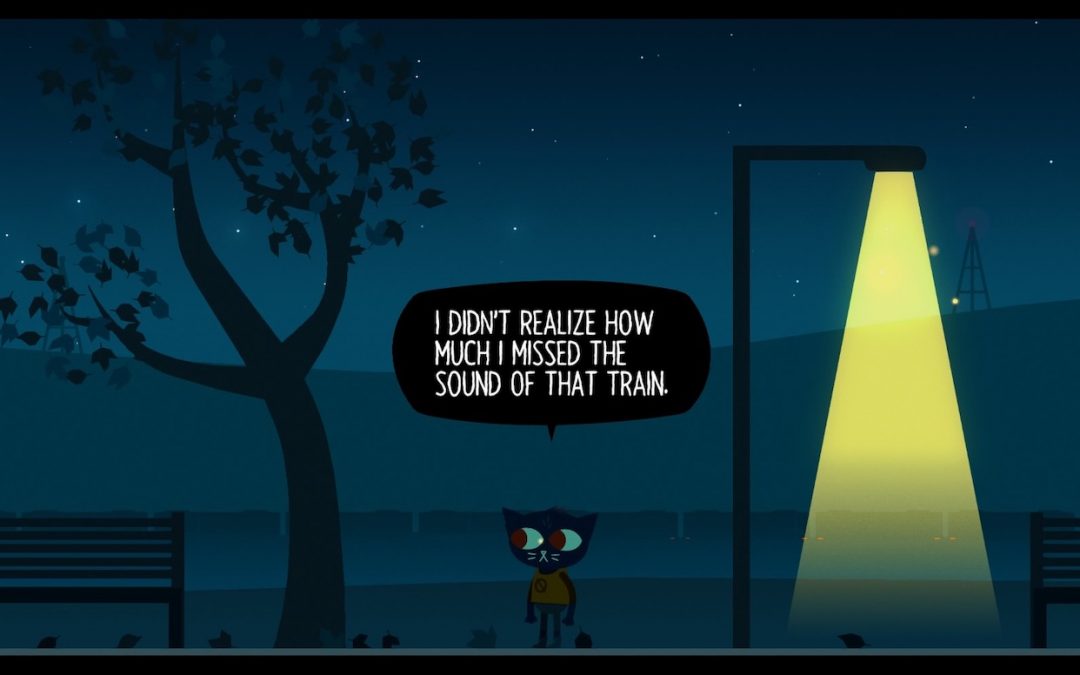 I first played Night in the Woods shortly after its release in May 2017, and was immediately charmed. The narrative-heavy game follows twenty-year-old Mae Borowski, who is returning to her hometown, Possum Springs, after dropping out of college. Critics gave it favorable reviews, and its narrative, dialogue, and design landed NitW on many Game of the Year lists (including ours).

I picked up this game at a strange time in my life: I was two years out of college, working two part-time jobs I generally enjoyed but that weren’t in my field, and attending grad school full time. After completing my undergraduate education, I felt directionless, unprepared, and too inexperienced to pursue the jobs I wanted that were in my field.

These feelings were fresh in my mind when I started NitW. I too returned home to my small hometown (a former mining town, like Possum Springs) in the suburbs out of college. In the opening few minutes of the game, Mae takes a shortcut through Sawmill Park (a playground she went to as a child), and while it didn’t look at all like the park I grew up with, her dialogue perfectly captures the weirdness and nostalgia of returning to a once-familiar place.

It was explicit permission to be messy by proxy.

Nostalgia becomes a major theme, ultimately driving the game’s major conflict. At NitW’s climax, Mae and her friends discover that members of the Possum Springs community have been sacrificing other residents in an attempt to revive the dying economy and coal mining industry. Mae begins the game nostalgic for her less complicated high school days, but soon finds out the people of Possum Springs will do just about anything—including murder—to bring back its prosperous economy.

While most small communities probably aren’t undermined by cults worshipping a deity called the Black Goat, part of the reason NitW is so incredibly relatable is because it’s a specific situation that doesn’t feel specific at all. Possum Springs could be any rural mining town, but the businesses there and the people who inhabit it give Possum Springs a convincing liveliness. Aside from the less easily fixed economic problems, the residents have individual problems ranging from addiction to self-esteem, and these real issues make Possum Springs feel like a living, breathing place you’re inhabiting while you play. The issues NitW touches on, alongside the dialogue and environments, make it intensely relatable for my generation (Millennials) as well as, I suspect, a Generation Z audience.

Mae is relatable because she’s funny and honest, speaking in what Millennials will recognize as their own dialect. She’s flawed but approachable because of it, and I found her relatable even if I could only relate to certain parts of her personality. Emotionally, Mae is a mess, and inhabiting her messiest moments—getting too drunk at a party, smashing lightbulbs with Gregg, engaging in fights I would bend over backward to avoid in real life—was a sort of catharsis. It was explicit permission to be messy by proxy, permission we don’t usually give ourselves in real life, and it made Mae feel like a more relatable and genuine character. 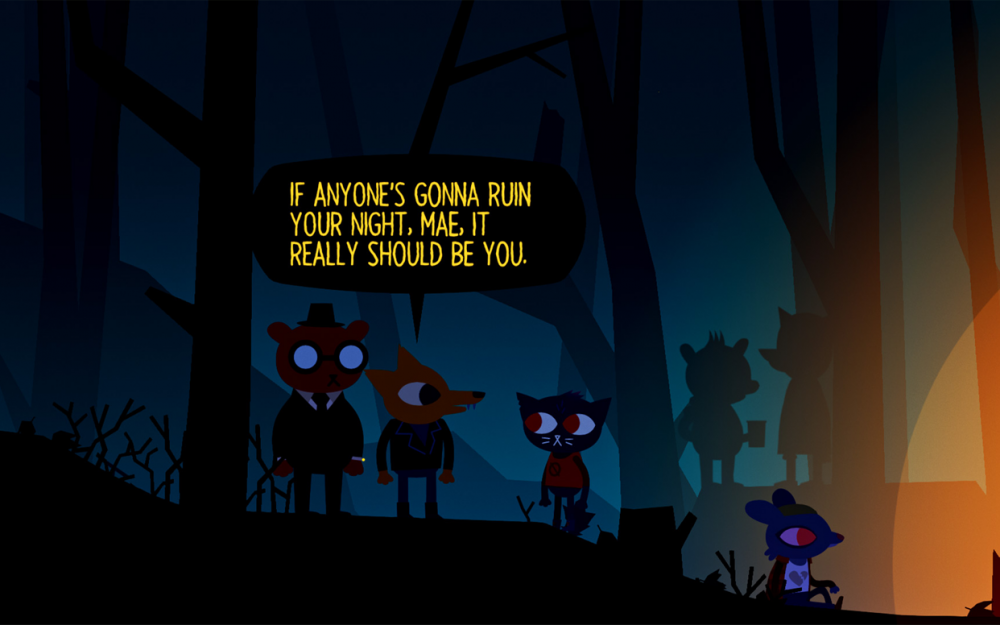 The sense of nostalgia Mae feels in Sawmill Park only grows as she revisits the places she used to hang out at as a teen, but finds new businesses in their place. The initial conflict stems from Mae’s desire for things to go back to how they once were, despite knowing both Possum Springs and she herself have irrevocably changed. If you’ve spent any manner of time away from the place where you grew up and returned to find local landmarks replaced by new businesses, it’s an intensely familiar feeling. A surprised “Wait, we have one of those now?” has become a common phrase in my lexicon during trips home.

I see so much of my hometown in Possum Springs, from the half-empty mall that felt magical once to the restaurant whose Friday night patrons are almost exclusively high school kids because the food was cheap and it was open late. If you’ve ever been to Pennsylvania, you too have probably been to Possum Springs. If you’ve ever lived in Pennsylvania, Mae’s community’s problems—economic stagnation, the slow suffocation of a once-thriving industry—may seem familiar, too.

One of the things that makes NitW work so well is that it preserves a moment of enormous uncertainty.

These issues don’t just affect the town’s older residents. By clinging to antiquated ideals and methods of business, they’re also actively robbing Possum Springs’s younger residents of a chance to define the future. Regardless of where most Millennials are from, this idea is something that’s often practiced in real life, though through politics and not secret underground murder cults (well, as far as we know, anyway).

Politics would make for a far more boring game, though, and besides, a secret underground murder cult gets a similar point across. The cult’s desire to return things to how they once were echo the policies and attitudes of American conservatives, and one of the members even describes the cult as a “buncha old boys doing their damndest to protect their own and their neighbors.”

Their choice in victims is telling, too. Throughout the game, Mae and her friends talk about the disappearance of Casey Hartley and speculate about what happened to him, but aside from the obligatory “missing” posters put up by Casey’s family, they seem to be the only ones who care. It’s not just Casey, either; one cult member says they’ve made more than three dozen sacrifices to the Black Goat. For a town of Possum Springs’s size, that many disappearances should have rocked the town to its very foundation, but instead the sacrifices go quietly unnoticed because the victims were residents who wouldn’t be missed.

Like several of Mae’s friends, Casey didn’t go away to college, and his participation in “crimes” with Gregg and possible drug use made him a target of the cult. Through Casey, it’s clear the victims came from the town’s most vulnerable population, drawing a direct parallel to real-life America where poverty is criminalized and conservative politicians are constantly attempting to undermine the rights of minority citizens.

One of the things that makes Night in the Woods work so well is that it preserves a moment of enormous uncertainty in the United States, thanks in part to the political parallels. The cult’s biggest problem (economic stagnation) is one real-life Baby Boomers blame specifically on young people. This is often done in the form of accusatory articles about how we’re killing chain restaurants, starter homes, bar soap, and more, as though a collapsing economy can and should be blamed on young folks hating Applebee’s and not on, you know, very few of us receiving a living wage.

I wonder if this will still be as intensely relatable to future generations, and I genuinely hope it isn’t.

It isn’t just the small-town feel of Possum Springs that makes the game so familiar, but the ripple effect of the larger issues like economic stagnation. Mae is one of the more privileged characters in the game, lucky enough to have been able to go away and gone to college. Even if she did return before completing her degree, it’s enough for the cult to overlook her as a target. Her education status makes her an asset to the town, not someone who wouldn’t be missed. Mae’s education and lack of direction also causes strain in her relationship with her friend Bea, who is intelligent and ambitious but never had the opportunity to leave home and go to school. 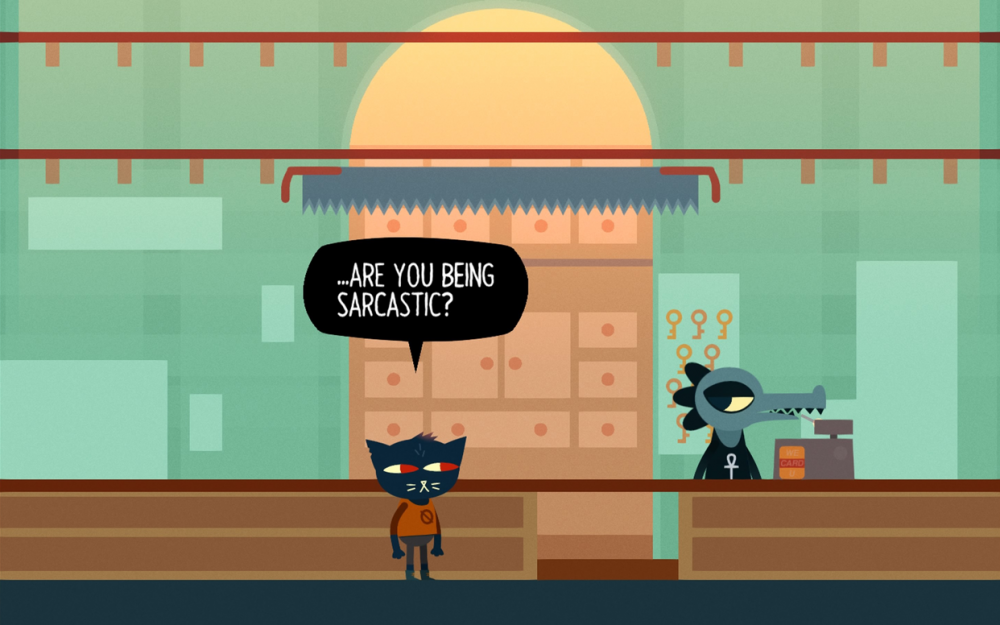 There’s no comfortable or easy resolution to any of these problems. It would take years to undo the system that put Possum Springs into the downward economic spiral it’s in, and Night in the Woods is not that kind of game. Reading Polygon’s review now, after having plenty of time to think about why the game is still affecting me almost two years later, I was struck particularly by Justin McElroy talking about feeling like he was waiting for the game to start.

NitW certainly meanders. Players are free to explore Possum Springs at their leisure, completing short outings and minigames that allow you to get to know other characters. It’s a game without real objectives, and even the antagonistic cult members are casting a wider net. Mae is ensnared in their activities, but never an intentional target.

I think this is part of the reason the game feels so meandering. There’s no real way for Mae and her friends to take action against the cult members. Sure, they’re the game’s main antagonist, but they’re also a symptom of a systemic problem. That also doesn’t mean there isn’t value in a game that takes its time, because it allows for a richer development of the characters and environments. More than anything, Night in the Woods emphasizes the boring things, the routine, and frames it with the stress of being a young, unemployed, queer, mentally ill, or otherwise vulnerable person trying to exist in society.

In retrospect, this is one of the things that makes Night in the Woods feel so vastly relatable, and I think part of why it has been so well-received by a twenty-something Millennial audience who can probably relate to at least one of those traits. Through Mae, her return to Possum Springs, and her feeling of not-quite-belonging, we’re privy to an intimate look at the anxiety the uncertain economic situation and social problems cause.

Mae is a deeply flawed protagonist, and even still I couldn’t help but root for her. In her, I saw my own desire to leave college with a job and a plan, to return from school a changed person, to look at my life and say it has started, I’m an adult, and I made it. The reality of course, is much more complicated, not just for me and Mae but, I’d wager, for most people graduating college within the last ten or so years. I, of course, did not “make it” by the time I graduated, but it didn’t mean my or Mae’s lives had not already started.

To wait for the game to start implies you are playing a game that is, somehow, winnable, but Night in the Woods is not a game you can win. It’s just a slice of Mae’s life, in which players exist for a moment in time. Besides, no one is going to win life forever in their twenties. The true joy of Night in the Woods and, I think, the reason so many people find enjoyment or catharsis or community or value in it is because it lays bare anxieties specific to an enormous segment of its audience without expecting the players to fix systemic issues. Instead, it gives them a space to live in that messiness and say, “You know what, this is garbage.” Simply put, it makes players feel seen without infantilizing or making fun of them.

Ultimately, I believe the game’s ending is a hopeful one. Mae, her friends, and the other residents of Possum Springs may never be able to bring back the past, but it doesn’t mean a brighter future isn’t possible. It’s up to the younger generations—up to us—to build that future now, and it’s not something we can wait around for; it’s something we have to seize for ourselves.