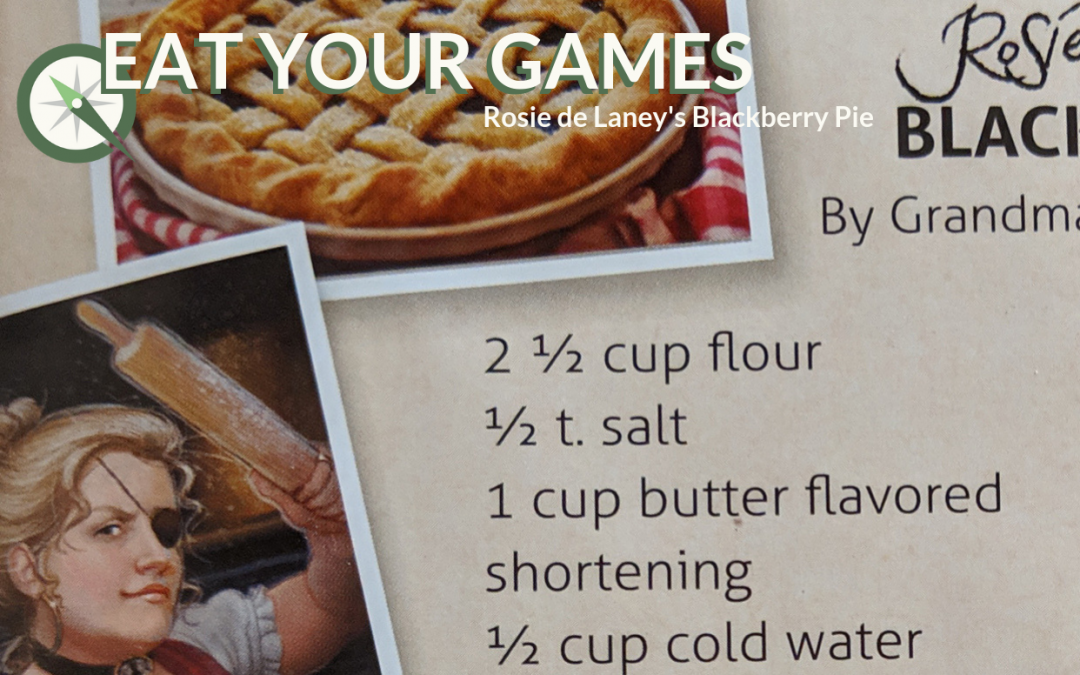 But then there’s Wizard.

Wizard is this wild 60-card game where you don’t just want to win as many hands as possible—you want to predict, or bid, exactly how many hands you’ll be able to take. If you take more or fewer hands than you bid, you lose, good day sir. (Jk, you just lose some points in that round.)

Wizard is played in several rounds (usually ten), which are broken into tricks. Each trick involves playing one card from your hand against other players’ cards. Each round adds one more card—and therefore, one more trick per round—to each hand.

Starting with one card per person in the first round, you look at your card, and you try to decide whether you think you’ll be able to win the trick with that card, or if you’ll lose it. Then, you “bid,” or announce to the table that you think you’ll win or lose the trick—and if you’re right about your prediction, then you get points. In the second round, you try to predict whether you’ll win both tricks, lose both tricks, or win only one of the two tricks—and so on, as you gain another card with each round of play.

The more people you’re playing with and the more cards you get per round, the harder it gets to predict accurately how many rounds you’ll win. Plus, the Wizard deck doesn’t only contain the standard 52 cards; it also has Wizard cards, which nearly always win, and Jester cards, which nearly always lose. But if you are able to guess correctly, you’ll be rolling in points.

Wizard is a little complicated, but super fun, and people will occasionally play it with me—but still, not as often as I’d like. 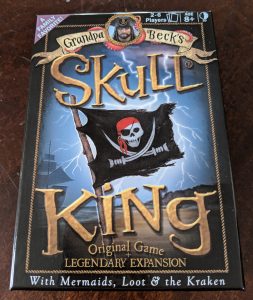 But the other day, my brother introduced a game-changer. He slapped a new game down on my table: Skull King, a pirate-themed trick-taking card game where you want to “conquer ye foes and claim victory for yerself.” (The version my brother has is the Legendary Expansion, published by small family business Grandpa Beck’s Games in 2018.)

We started reading the instructions. Instantly, we realized: it’s just Wizard, but with pirates.

Skull King has 66 cards: five Escape cards (functionally Jesters), five Pirate cards (functionally Wizards), four colorful suits numbered 1-13 (similar to clubs, spades, etc.), a Tigress card (can be used as either an Escape or a Pirate), and the Skull King (the king of all pirates and the unambiguous winner of any round). The rules are very similar to Wizard rules, but with specialized cards and a few variations. The Legendary Expansion contains a few more cards (Mermaids, Loot, and the Kraken) and gives new abilities to each of the Pirate cards, but I haven’t played with any of those variants yet.

Honestly? I love the pirate theme. I think it improves on similar classic card games, like Wizard or even Oh Hell!, by making it more relatable and inclusive for people who didn’t grow up literally constantly playing games using a standard 52-card deck and thus have a nostalgia and fondness for plain black and red shapes and lots of numbers. (No, you have a nostalgia and fondness for etc. etc.)

Anyway. What does Skull King have to do with eating?

Look! Right there in the instructions! A recipe!

I feel the urge to create. 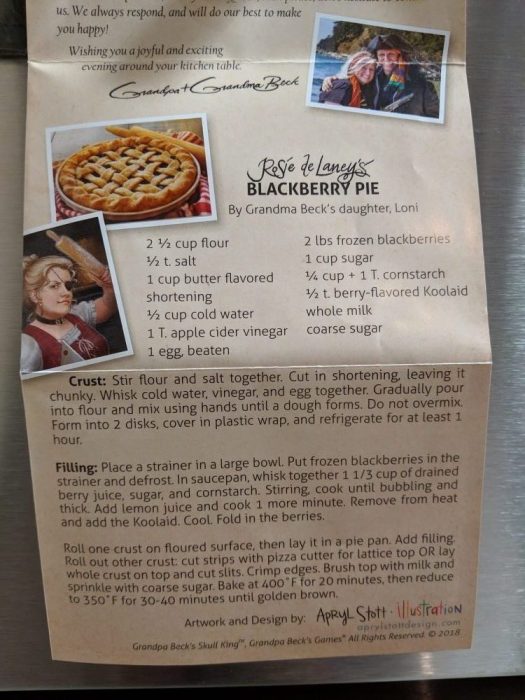 I’ve made a ton of pies in my life, but I’d never really made a crust from scratch, so this was a bit of an experiment. I first forgot to put the butter in the crust, which became extremely apparent literally 10 seconds into trying to mix all the dry ingredients with the tiny splash of water and whiskey. I figured it out, though, and managed to ex post facto knead in the butter. I do think I overcompensated and managed to over-knead the dough a bit, as the finished crust was a bit tough. 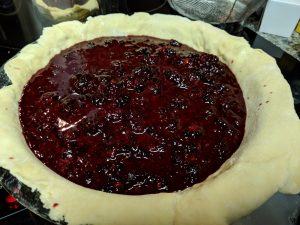 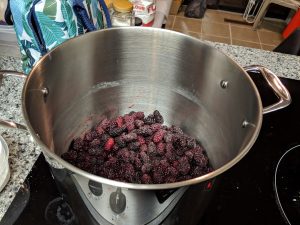 The blackberry filling was more straightforward. While the recipe says to defrost/strain the blackberries first, I just dumped them all into a big soup pot with the sugar, corn starch, and Crystal Light. As long as I was stirring them constantly, having the berries in there heating with the rest was completely fine. (I will say that I walked away to fiddle with the crust and when I came back it had started to burn, but I caught it before there was any unsalvageable berry damage.)

I poured all of the non-burned filling into the bottom crust, and while I pondered how to make an interesting top crust pattern, I realized: oh my god, I have a pie bird. 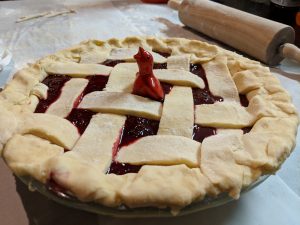 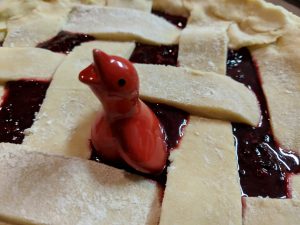 The recipe does not call for a pie bird, but listen, I couldn’t just not use my pie bird.

I milk-washed the crust, sprinkled some sugar on top, and set my pie in the oven. My pie bird live tweeted the experience.

While the pie was baking, I realized I knew nothing about the pie’s progenitor. What about the lore? Who IS Rosie de Laney?? I must know more about this cleaver-wielding, berry-baking pirate. 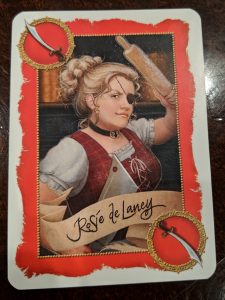 According to the expansion rules, “A galley chef whose temper is as hot as her stew, Rosie is feared by all.” And in the Legendary Expansion Pirate Cards announcement for Skull King on Grandpa Beck’s Games’ Facebook page, they say Rosie de Laney is “downright ornery. You don’t want to get on her bad side—your food will quickly go from bad to worse, just sayin’.”

Rosie stands, for me, as a representative part of the whole experience. This is just to say: I love this game, as much as I love her. I’ve now played Skull King several times with my two brothers, my fiancé, and my mom, and while of course there’s lots of yelling when people don’t make their bids, it’s that good good competition where no one actually gets salty when they don’t do the thing.

And look: I have proof that my friends will play Skull King with me, because they did! I fully attribute this to the pirate theme, as they spotted the box and asked, of their own volition, if we could try it. They picked it up quickly, much to my delight, and they even told me they’d play it again.

Finally! A way to integrate more card games into my Pittsburgh friend rotation!

And, of course, the pie… the pie was delicious. 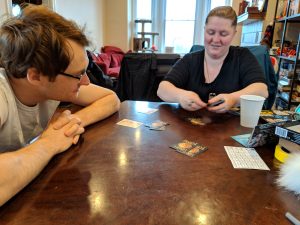 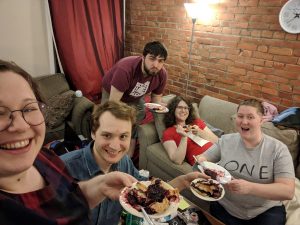 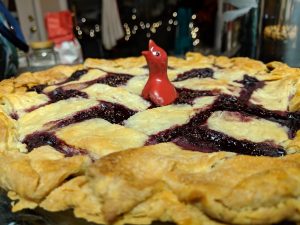