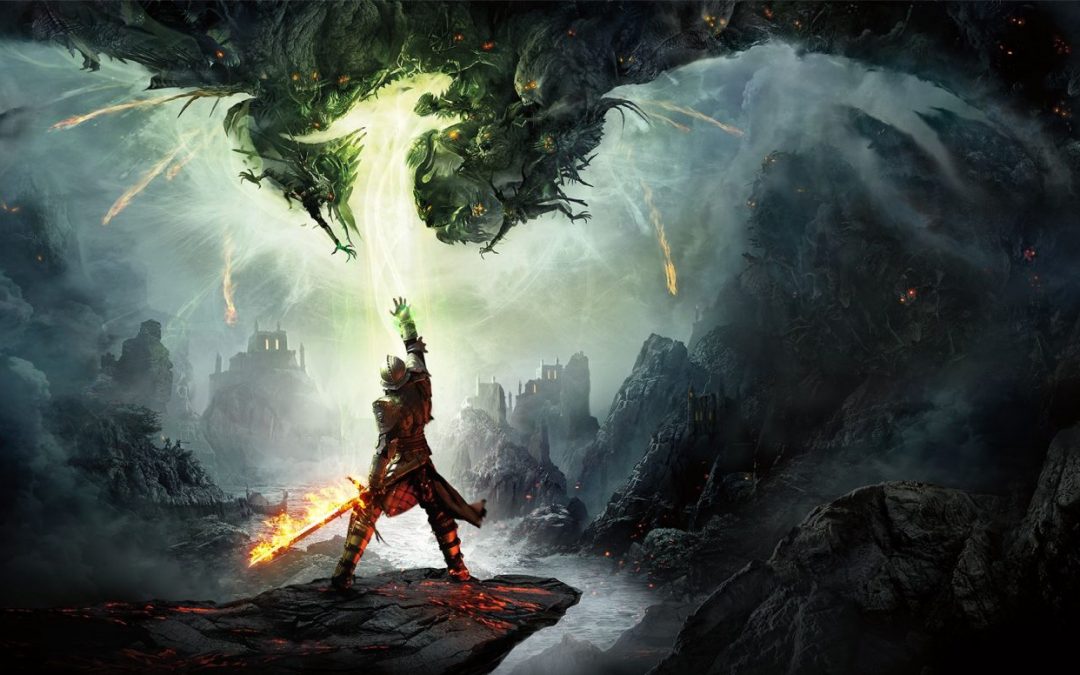 This April, the only fools we found were ourselves, as we tried to understand just what the heck is going on with game genres. What is a game genre? What purpose does it serve? How do they differ from other kinds of genres? We try to untangle these questions within.

Melissa Brinks: Once again I have started things off with a horrible question. Do I have a favorite game genre? I’m going to go with “narrative adventure,” and hope that that’s a real genre and not just something I made up because “walking simulator” is too limited and “adventure” is too broad.

Azha Reyes: “Narrative Adventure” should absolutely be a genre if it isn’t already. Personally I’ve found I gravitate towards story-heavy farming sim RPG-ish things like Rune Factory 4 (which may… actually be one of a kind now that I think about it), and visual novels. Anything that doesn’t give me difficult puzzles to solve, honestly. Madison Butler: I’m a sucker for a good story and a big sword, and, I guess, the gig economy, so open-world third-person RPGs with interesting characters and plenty of sidequests are my favorite. Is “story and sword” a genre? After a cursory Google search I’ve been reminded that it’s a difficulty level in The Witcher 3, but I also think it’s well-suited to describe a genre.

What defines that genre, as opposed to other genres?

Melissa: I’m all about storytelling potential, so, to me, a narrative adventure is a game that emphasizes storytelling and encourages the player to interact primarily through exploration, puzzles, and discovery. I’m thinking of this genre in broad terms, so you could make a case that a game like We Know the Devil and even a game like Uncharted could fit under this umbrella. However, Portal is my favorite video game and it is not a narrative adventure, because the emphasis is on puzzle-solving as its own draw, not as a vehicle to deliver story, you get me?

Genres are meaningless and fake, and if I want to appropriate a term for my own purposes you better believe that I will.

Azha: While I don’t think “story-heavy farming sim RPG-ish” is technically a genre, I think what really defines that genre is a having a good farming and crafting system that becomes secondary to the story of the game the longer you play it. I use farming to make money and ingredients so I can afford expensive gifts for all the villagers that’ll get me their touching backstories, and I think a game that enables that is a pretty good example of the genre.

As for visual novels… I guess when I think of what really embodies the genre, I think of branching narratives where you get to make lots of decisions, and simple mechanics that are designed first and foremost with the story in mind. Romancing characters isn’t really important to me as long as the overall story is engaging and the mechanics don’t get in the way of it.

Madison: The phrase “open-world third-person RPG” is, honestly, word soup that covers an extremely broad range of games. Broad descriptions like these ones aren’t always helpful or meaningful, so I’m going to stick with “story and sword” games, which I would define as having a balance between a rich narrative and engaging combat that players can build upon through exploration. Specifically, I’m thinking of games like The Witcher 3, Final Fantasy XV, and Horizon Zero Dawn because these are some of my personal favorites, but I think there are numerous games that fall into this category.

Emily: Metroidvania games are, as the name suggests, games that are inspired by the game design/mechanics of Metroid and Castlevania (neither of which, funnily enough, I’ve actually played). They’re a subgenre of action-adventure games, featuring a usually huge interconnected map that you uncover as you go along, unlocking doors and areas, and usually also plot, as you gain new abilities. I’m deeeeeeeply embroiled in Hollow Knight right now, which is a fantastic example of a Metroidvania game. How are game genres different from genres in other media?

Melissa: Remember how genres are meaningless and fake? I don’t even know what to make of game genres, which, unlike other media, are primarily defined by mechanics (what you do and how you do it) as opposed to story features (what happens and how). But even mechanics are such a broad way to define a genre that it becomes extremely difficult to be specific about things—is “open world” a genre or a feature? Does a leveling system make Marvel’s Spider-Man a roleplaying game? Is Skyrim a first-person shooter if I refuse to do anything but archery?

This isn’t to say that genre is pure and uncomplicated in any other medium—after all, young adult exists—but rather that we use the word ‘genre’ to mean multiple things, and those things get especially complicated when it comes to games. We don’t even think about using words like ‘fantasy’ or ‘romance’ to define a game’s genre—those are all secondary considerations to mechanics, which I think is why we describe games like this: “an open-world, third-person fantasy action-adventure with RPG and dating sim elements.”

That’s Dragon Age: Inquisition, folks! A complicated mess. Not that I’m saying there’s a better solution (at least, I don’t have one), but when I start thinking about game genres too much I go cross-eyed.

Azha: I hadn’t even realized how right Melissa is until she put it all into words like that, but it’s true! Genres in games are more about the mechanics and less about the story content and that seems… really tailored to a specific demographic. I guess the fact that game trailers often talk about the mechanics of a game while giving you nothing about the actual story is really related to that. Like, I don’t care that I can do a triple backflip off a wall to stab Beelzebub in the throat with a glass shard I pick up off the ground, tell me why I should care about stabbing Beelzebub in the throat.

I think in games especially, genres are used to classify games rather than describe them.

Madison: I think in games especially, genres are used to classify games rather than describe them, which is helpful to an extent but ultimately meaningless when you’re in the mood for a game that, for example, is heavy on romance.

Perhaps part of the reason game genres are so different and so much harder to classify is because they require a different level of interaction and engagement than other media. Like Melissa said, “genre” in games covers both mechanics and story types—it’s more of a matrix than a single category. It’s more useful to me to think of genre classifications in games as more of a tagging system that tell me what I will potentially like in a game than a hard genre.

Emily: Oh, I completely agree with Melissa. In games, it’s almost completely based on mechanics. Saying for example that a game’s genre is “sci-fi” doesn’t really mean anything, unlike in film or books. When I was considering these questions, I had to really think about what “genre” meant in a video game context, before I could answer any of them. And I realized that even though I do like sci-fi, in games, unlike other media, it truly depends on gameplay. I don’t really care for certain types of game mechanics (looking at you, first-person shooters), so to say I like “sci-fi games” wouldn’t actually be an accurate description of why I like certain games. I will say, though, that there are puzzle platformers and Metroidvanias I don’t like because their narratives are just not interesting or well-developed. So there’s a balance in terms of “game genre” and “narrative genre” that I tend to strike. How does a game’s genre inform the way you think about a game before you play it?

Melissa: Honestly, at this point I use game genres to tell me what I won’t like. If I see ‘roguelike’ I’m out. ‘Bullet hell,’ I’m out. ‘First-person shooter,’ I’m out. I might be convinced to try games in those genres if they’re recommended specifically to me by people I trust, but because game genres are so broad they don’t really tell me if I’ll like something, but they will tell me if I won’t.

Azha: I will just not play a game if it’s for a genre I don’t like. This probably shuts me off from a lot of great stories out there simply because the game industry can’t be bothered to give me real genres like “romance” and “sci-fi fantasy” instead of game mechanics descriptors.

Madison: Like I said, I think of them more as “tags” than hard genres, and I avoid games with certain mechanics. I don’t do first-person shooters or MMORPGs and I’m not the biggest fan of puzzle games, but if I see something labeled “walking simulator” I know it’ll be a narrative-focused experience and it piques my interest.

Emily: I pretty much agree with everyone, here. Some game genres are prohibitive, and I almost categorically don’t play certain types, but I do have exceptions. I hate bullet hells, although I didn’t mind Undertale’s mechanics so much (but that’s probably because I like JRPGs). I simply cannot literally ever play first-person shooters, which I hate—exceeeeept Portal. So I pretty much avoid games if they say they’re a genre I know I don’t like, unless someone I trust recommends one to me and urges me to play it. But even then I remain highly skeptical until I’m actually playing and realize I am not, in fact, as much of an immovable object as I’d believed.

Melissa: Yeah, as Emily points out, some of my favorite games are actually in genres I don’t like at all—both Portal and Undertale have features about them I generally don’t like, but both are also very conscious of how they use those elements. I think that’s an important distinction, at least for me—is the game doing something fresh and new with the genre, or is it mostly following an established formula? A good twist on expectations can work wonders!