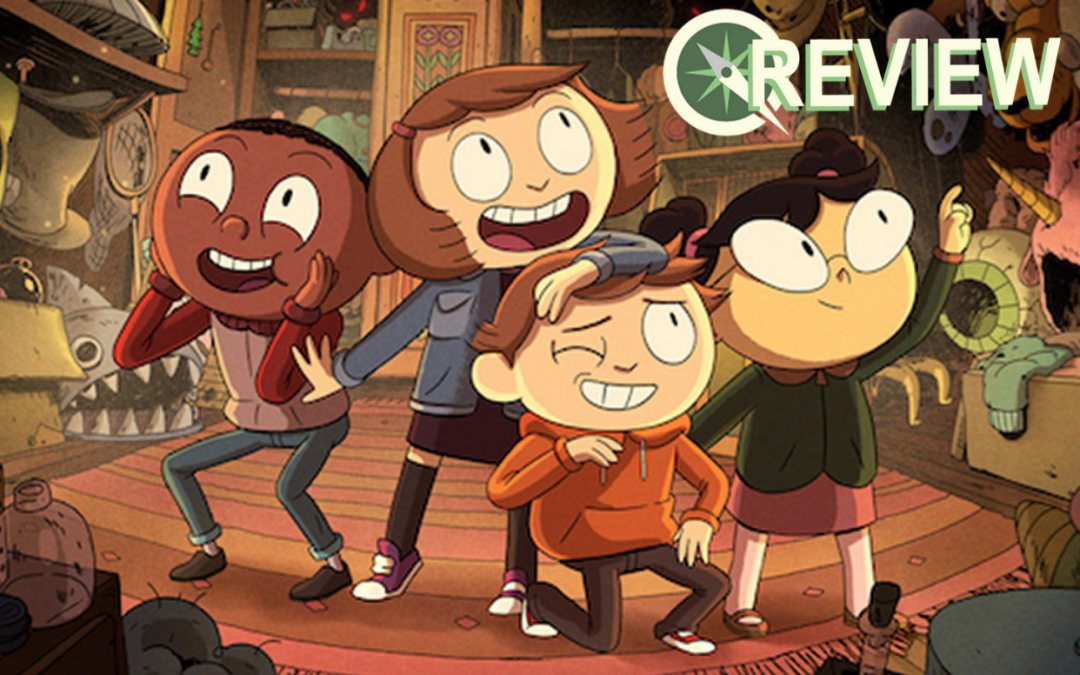 After undergoing a few hurdles and several years of development, Double Fine Productions’ Costume Quest games finally gets its animated adaptation—and this wait certainly proves patience is a virtue. Produced under Frederator Studios, this is the production studio’s first project backed through Amazon Video. Bryan Caselli and Will McRobb serve as its showrunners.

Sidequest was provided with a copy of Costume Quest in exchange for a fair and honest review.

The Costume Quest animated series was initially going to be just a one-off animated special. Frederator Studios produced the pilot, created by Patrick McHale and Zac Gorman, who previously worked together on Over the Garden Wall in 2015, and Amazon ordered for Costume Quest to be expanded into a full animated series. Frederator was experiencing problems and delays when it came to the distribution of its properties, such as Bee & Puppycat and Bravest Warriors. It would be a few more years of struggle before production would kick in and the series would find its place on Amazon Video on March 8, 2019.

Gorman illustrated and wrote Costume Quest: Invasion of the Candy Snatchers, a comic through Oni Press to time with the Costume Quest 2’s release. The comic re-examines Halloween from the perspective of one of the non-hostile monsters. Gorman was recognized by Double Fine themselves, having previously drawn a Costume Quest fancomic for his own Magical Game Time webcomic series, which got the attention leading to the two’s reunion.

This Costume Quest fan comic led to me doing a full gn, selling a pilot to Amazon, and working on the series as a writer #fanartgotmepaid pic.twitter.com/3GGFm1I500

Viewers new to the series should not fret, as this adaptation of the games is actually a re-interpretation, departing from established game canon.

Frederator’s adaptation of the series takes place over the month leading up to Halloween. Fraternal twins Reynold and Wren are residents of Nougatown.  Alongside their friends Everett and Lucy, they must use the power of teamwork and magical costumes that give them powers to fight off the monsters that they discover have been secretly invading their town.

The first Costume Quest game, available on multiple platforms, introduces the twins as newcomers to Schafer County (named after Tim Schafer, Double Fine’s founder). Halloween is right around the corner, and the siblings’ mother encourages the two to get to know other kids by taking part in trick-or-treating. The night of, the player chooses one of the twins to play as (which subordinates them into a silent protagonist) while their twin gets kidnapped by monsters. As it turns out, monsters have secretly invaded the town to loot all of its candy. The player gains super abilities through their Halloween costume by the power of sheer strong-willed imagination, and it is up to them to stop the monsters and save their sibling all in this one night. The games use a turn-based battle system, and over time, the player makes friends to expand their party. Like classes and jobs in a typical fantasy RPG, each costume supplies a different appropriate set of skills. For instance, the robot costume turns the player into a giant mech on the battle screen, and its attacks include shooting missiles. More costumes can be unlocked throughout the game and it is highly encouraged to do so to create variety across the party.

No longer just potential avatars to a player, the twins have more fleshed out personalities in the new animated series. Compared to his sister, Reynold takes a more passive and mellow approach to things. Meanwhile, Wren takes has a more impassioned but somewhat zealous attitude when it comes to taking action. Everett and Lucy have been pre-established friends in the animated series, whereas they must be recruited as allies through progression in the original game.

The animated series also fleshes out the parents and adult characters, though the games distance themselves from the adults by keeping them unseen. In fact, the twins’ father is seen acting as an established tour guide of the town in the animated series.

Because the adults have been granted this new visibility, they contrast the younger protagonists. At one point in the series, Everett grows frustrated when the adults around them aren’t taking the concerns about monsters in the town seriously. He laments how they are just kids and that they shouldn’t carry these big responsibilities to tackle this potentially developing crisis. Though the games symbolically put the adults in the background, the series doesn’t, making their lacking initiative even more poignant. It takes seeing the world through wild, imaginative eyes to solve its problems, even if it just means you are a kid. The animated series visually conveys the autumnal mood of the games through a warm, muted color palette that manages to be still vibrant and eye-catching instead of dull. It perfectly captures the feeling of an endless fall, recalling the aesthetics of other animated series like Hilda and Over the Garden Wall. Both of these titles also deal with children facing fantastical elements and creatures. And also like these other titles, it also perfectly conveys a realistic, grounded perspective on kids and their passions for simple pleasures—like getting the best costume before Halloween comes—giving them the motivations and desires to take action from innocent places.

Frederator’s Costume Quest is a pleasant, satisfying reiteration of the eponymous games. Although Halloween is not even around the corner, both new viewers and old fans can find joy in it if they need something sweet. Regardless of the minute changes, Costume Quest is consistent across all of its current media: that the spirit of Halloween and the power of imagination can be an unstoppable force even against monsters.