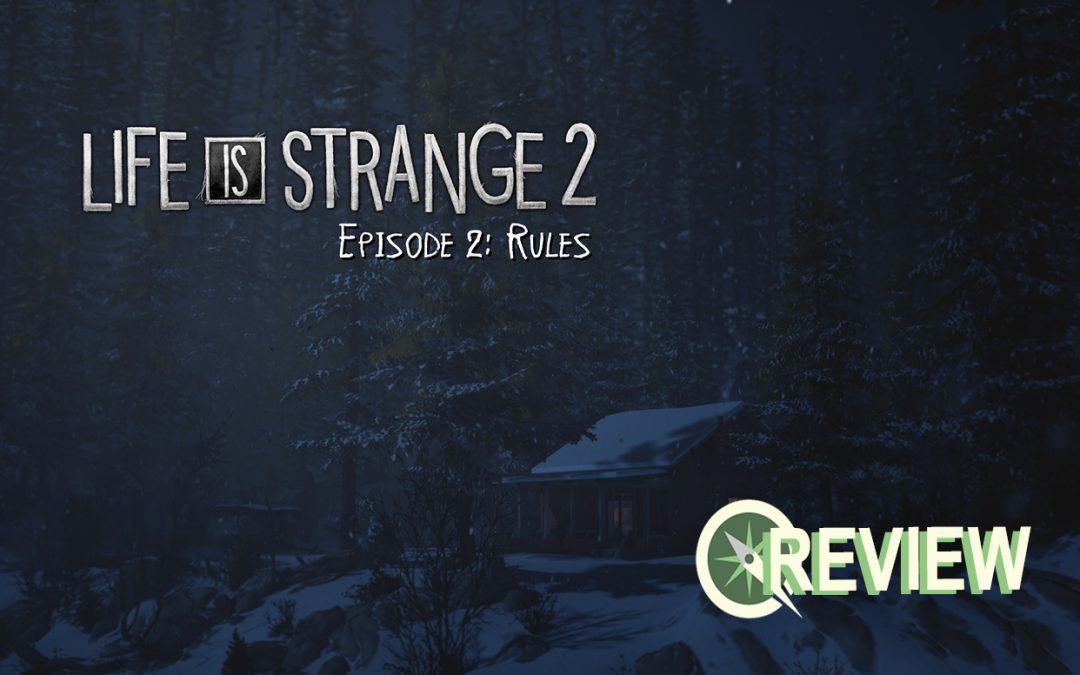 Life is Strange 2 gets something that its predecessor did not: that power itself is not a bad thing, but that it comes at a cost. For Sean and Daniel, two Latinx kids on the run after a supernatural blast kills a Seattle police officer, that cost is higher than most.

Sidequest was provided with a copy of Life is Strange 2 for PC in exchange for a fair and honest review.

Episode 2, “Rules,” opens with Sean, the player character, and Daniel squatting in an abandoned cabin. Though the boys are isolated from the racism that’s chased them from Seattle to rural Washington and down into Oregon, as well as the threat of being caught by the police, the cabin is hardly idyllic; it’s a ramshackle building without working water or heat, and Daniel has a cough that’s rapidly growing worse. Sean decides they’ll be moving on to Beaver Creek, Oregon, where their maternal grandparents, Claire and Stephen Reynolds, live.

It’s clear that Sean has hesitations about this decision, but we don’t really know why, beyond that his mother left the family. When he arrives, the grandparents seem pleasant enough, but conversations and exploration reveal that they, like so many others the brothers encounter, are harboring prejudices that endanger them.

In my last review, I mentioned that I was concerned that a team from France stands to profit from a story of oppression that doesn’t apply to them. Those concerns still stand, but there is a degree of care and subtlety to Episode 2’s story that eases some of my fears. There’s more care about serious issues like racism, abuse, and alcoholism in this game than there was in Life is Strange‘s handling of misogyny, queerness, and sexual harassment—I can appreciate this growth, even as I wish that I could say for certain that there are Latinx writers on the writing team.

Throughout the episode, you’re presented with choices like allowing Daniel to swear or use his powers. These choices do carry weight, with lasting repercussions later in the episode. But it’s the conversational choices that gave me the most pause, particularly the ones with Claire and Stephen. How much was it okay to reveal? How trustworthy were they, really? Was that remark about being American meant kindly or as a sort-of threat?

I constantly weighed each conversational choice against the boys’ safety and security in the Reynolds’ home, grateful that Life is Strange has no time limits for its choices. Though the Reynolds aren’t outright threatening, it’s clear that they regard the boys with some suspicion and tell them to stay inside—they’re wanted by the police, but, more pressingly, they’re Mexican. They don’t look like their grandparents, and they were raised by their father, not their white mother. With the Reynolds so intent on keeping up appearances, each choice isn’t just a question of being polite and being straightforward, but also a question of getting kicked out for pushing back on their prejudices. Racism comes in many forms. It isn’t always screaming epithets or, as in the first episode, committing physical violence. Sometimes it’s finding a MAGA-inspired hat in your white grandfather’s study, or a right-wing book in his bedside table. Knowing these things, and seeing the careful way they talk to and about the boys, the Reynolds seem to treat Sean and Daniel as exceptions to their implied prejudices. Though they take the boys in and care for them, they caution them to stay inside to avoid being seen, which could bring the police down on all of them—and reveal that the upstanding Reynolds are harboring not just fugitives, but Mexican fugitives, a disruption to their perfectly executed white facade. The threat of no longer being thought of as an exception to bigotry is always there for Sean and Daniel, whose acceptance could be revoked at any moment.

When you talk with their grandmother, Claire, you can ask her thoughts on Esteban, the boys’ father. She says he never really tried to change the differences between them. Sean can press the issue, asking if she ever tried to change that. I don’t know what happens if you do—I was concerned about the boys’ well-being and tried to keep them safe, even when it meant buttering up a woman I have every reason to believe wouldn’t have spared a prayer for Sean and Daniel if they weren’t her blood relatives.

The racism is more subtle than the first episode but no less impactful. Walking through the Reynolds’ household is tense—have you allowed Daniel to swear? Claire won’t like that. Does Daniel respect Sean’s leadership enough to pray? Does he listen, or does he act out? Though you can control Sean’s behavior, Daniel’s is contingent on how much he respects his older brother. If you haven’t done an effective job of leading him down the straight and narrow by paying for the food you need to live or telling him the truth when you can, it feels possible that his behavior might anger Claire and Stephen enough to get them kicked out of the house. Despite being asked to stay in the house, Daniel and Sean can befriend the neighbor kid, Chris, who many players will recognize from The Awesome Adventures of Captain Spirit. Daniel uses his powers to save Chris when he tumbles from a tree, leading to the game’s secondary conflict: how to keep Daniel’s powers a secret.

Chris is a much more sympathetic character than the Reynolds, particularly if you’ve played Captain Spirit. His father, having lost his wife, has become an alcoholic, and he abuses Chris when drunk. As Daniel and Chris form a friendship both desperately need, it becomes harder and harder for the player, as Sean, to deny either of them anything—their parents are absent, and both need kindness in their lives. But Beaver Creek is a small town, and the police are on the lookout for the brothers, forcing you to weigh small moments of happiness against safety.

No matter what you choose, terrible things happen. There are no happy endings here, no comfort or safety for Daniel, Sean, or Chris. It’s heartbreaking, because strip away the superpowers and it’s real. Daniel and Sean have to keep running because racism is everywhere. Chris will always be hurt, whether as a result of Sean and Daniel’s actions or because of his father. The small kindnesses of tolerance and hope make the moment-to-moment interactions easier, but it always ends badly.

Before I get any deeper into this, let me say that I think Life is Strange 2 is well-done. I think its narrative is effective, its purpose and execution clear. It’s a game that, I hope, will inspire privileged people to consider the constant fear of being a marginalized person in a world that can become dangerous at any moment.

But that means my enjoyment of it, if I can call it that, is quite different than it was with Life is Strange and especially Life is Strange: Before the Storm. The stakes were high in both, but, especially in the first game, there was more alternating between drama that sometimes became melodrama and quiet moments of peace and bonding between friends. I could relax into scenes like when Chloe and Max break into the pool, or the silliness of lines like, “vaping that dank OG bud.”

In Life is Strange 2, not so much. Even moments where the brothers aren’t actively running for their lives are fraught with tension. A scene where Sean and Daniel look at Christmas trees becomes a constant question of who’s looking at them. Eating breakfast is walking on a knife’s edge—what if Daniel swears? There’s no respite.

The result is twofold. On one hand, many of the things I enjoyed about Life is Strange aren’t present. There’s no peaceful music interlude, less goofy dialog. I can’t relax and enjoy it, because I am always so, so worried.

On the other hand, this is true, this is real. The world isn’t safe for these boys. I shouldn’t relax, because what they experience, sans the superpowers, is real.

Life is Strange 2 is effective and poignant. It’s also radically different from the first game, where issues as serious as sexual assault were balanced with a kid losing their tablet full of cat photos. It isn’t fun, not really—there are no neat minigames, and Sean’s drawing mechanic is, frankly, pretty bad. Some people think it’s a cardinal sin for video games to not be fun. I disagree; though I wouldn’t say I’m enjoying this game, I would absolutely, undoubtedly, recommend it.

It’s a strange thing to recommend a game that I don’t enjoy. While my love for Life is Strange came with a host of caveats about its handling of sensitive issues, this one comes with a warning that it will be an uncomfortable and heartbreaking experience.

Play it anyway, if play is the right word.