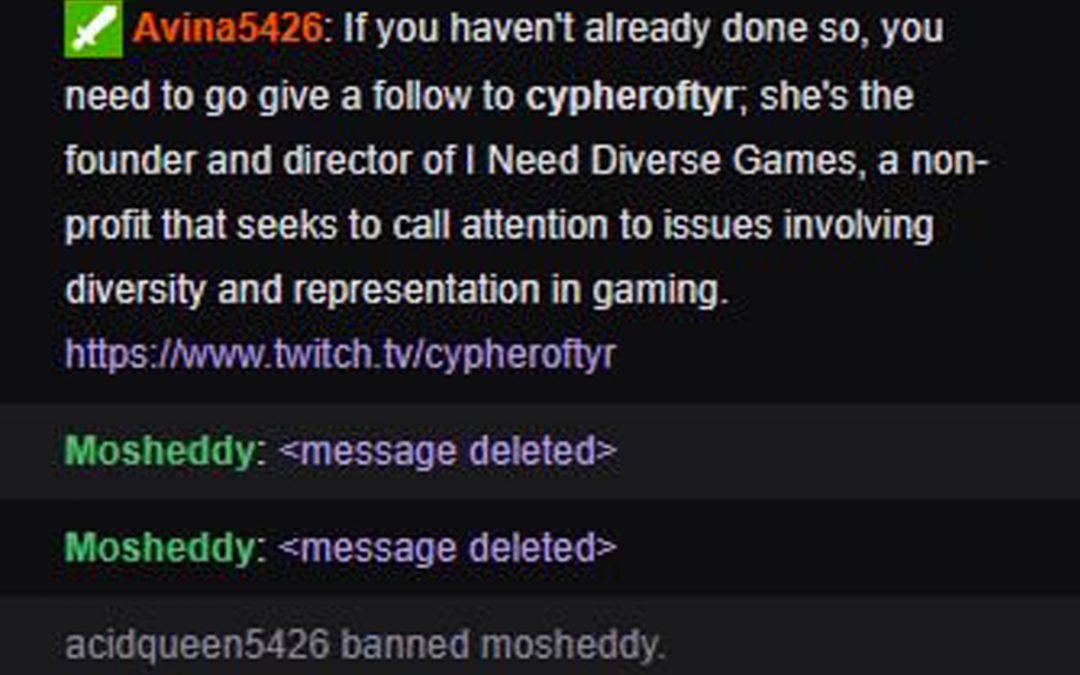 Tanya DePass, a prominent streamer and Twitch Partner, has been receiving harassment from Twitch user “Mosheddy” for over a month. DePass was first targeted by the user on December 17, 2018, and subsequently banned them from her channel for racist and homophobic comments in the chat. Since then, “Mosheddy” has been evading DePass’ and her moderators’ bans across virtually all of her streams.

Hey friends who have Twitch accounts, whether or not you stream? Can you report twitch user Mosheddy for Ban Evasion and harassment. He's following me around to hosts, raids and just sitting in my chat even when I'm not live.

DePass is the Founder and Director of I Need Diverse Games, the founding Editor In Chief of the now-discontinued Fresh Out of Tokens podcast, and the Diversity Liaison for GaymerX. On Twitch, she has streamed such games as Assassin’s Creed Odyssey, Destiny, Diablo III, and she is a player in the Rivals of Waterdeep Dungeons & Dragons actual play stream.

Though DePass and her channel moderators have banned Mosheddy’s main account, Mosheddy has still been lurking in DePass’s stream chats, likely using what are known as “sockpuppet” accounts, or secondary accounts used for deception. By using these sockpuppet accounts and/or enlisting friends’ help in their continuous harassment, Mosheddy has been able to evade bans and continue making remarks in DePass’s stream chats, as well as contacting DePass’ viewers through Twitch’s whisper function to pass on intimidating messages. Many of these alt accounts have the name “Mosheddy” or “Moshedy” in them, and even when they do not, they still send messages referencing their connection to Mosheddy.

Despite the bans, since December 17 Mosheddy and/or people impersonating Mosheddy have still been viewing DePass’ streams and camping in her channels even when she is not streaming. When not sending openly racist or homophobic remarks, Mosheddy and their crew have been sending frequent reminders that they are watching, such as seemingly innocuous chat messages like “Merry Christmas from Moshedy.”

Y'all, this sad little fuck can't even let this go on a holiday. This just happened in chat. Please report this account and Mosheddy for ban evasion, harassment and hate speech. Wanna do something about this guy @TwitchSupport pic.twitter.com/glkQl78HRM

Twitch’s Community Guidelines, which were updated in February 2018 to be more explicit in Twitch’s anti-harassment/hateful conduct policies, say “Stalking or violating someone’s established personal boundaries, such as circumventing channel bans, account blocks, or requests not to contact them” counts as harassment and is prohibited. They later say, “Violating our policy against harassment will result in your account being suspended.” Despite Mosheddy clearly violating these policies, Twitch has taken no action to suspend the user.

DePass has filed multiple Twitch reports since December 17 and has been actively calling on Twitter for Twitch to respond to her, yet she has received no response from Twitch Support. While on a business trip to San Francisco, DePass also went to Twitch’s office and met with its Trust and Safety team in person to discuss the issue, but Mosheddy is still not banned from the platform.

Twitch did not respond to our request for comment.

So after meeting with @Twitch and spending a lot of time on what's been happening. Tried doing talk show and this is what happened today. I'm going to keep talking about it till SOMEONE does something, or go to @WatchMixer pic.twitter.com/nmTWUH3Y4c

An even deeper root of this problem is Twitch’s current implementation of user bans. Though DePass banned Mosheddy from interacting with her, they are still able to watch her streams, make clips from her videos, and follow her activity. On a recent Cheddar Sports segment, DePass discussed Twitch’s current ban implementation, as well as suggestions she’d previously given to Twitch which would make streaming safer, suggestions Twitch has not addressed. Though Twitch rolled out new moderator tools on January 31, the new options do not actually allow moderators to better address streamer safety.

Mosheddy’s constant harassment has caused DePass to publicly contemplate leaving Twitch to stream on alternate platforms, including Mixer, Microsoft’s streaming platform, which has received praise for its quick harassment report resolution and confirmation and is often seen as more positive than Twitch and YouTube. One of Mixer’s employees has even reached out directly to DePass, stating that Mixer “want[s] to foster a positive and harassment-free environment.” This is in stark contrast to Twitch’s silence, especially considering that they are specifically tagged in most of DePass’s tweets regarding her harassment.

Also, the Twitch partner contract is written in a (likely purposely) obfuscating way to make it seem like you can stream elsewhere as long as it's not simultaneous to another platform; but it's not. I also am getting to a point where I don't care about partnership.

Wondering if I can stream to @WatchMixer without nullifying my current @Twitch partner contract. Though I’m starting not to care if it does since they’ve done nothing about my stalker.

Though DePass has been taking active strides to have Twitch address Mosheddy’s behavior and have him suspended from the platform—the extent to which includes searching for ways to take legal action and filing an FBI cyberstalking report—the Mosheddy’s constant presence has taken a physical and emotional toll on DePass, even forcing her to take extended breaks from streaming. “I do love streaming,” she said in an interview with Kotaku, “but I don’t love anything enough—be that the work I do as a diversity advocate at a non-profit, streaming, whatever it is—to sacrifice my mental health and well-being.”

FYI, thanks to this creep I've turned off auto-hosting and probably won't raid or host folks for a while. I'm not trying to bring this fuckery to anyone else's space. This is shameful, the steps I gotta take to keep a stalker out when @Twitch has done nothing.

I'm really sick, like can't keep food down, sneezing and coughing every few minutes sick. But I have video to edit, words to write, etc. Normally I'd do a no mic/no cam stream and play a chill game. But that stalker has taken the joy of streaming from me.

Twitch’s silence on this issue is deeply troubling, especially considering their recent denouncement of all harassment and vow that “many improvements [are] coming to the policies, moderation processes, and safety features on Twitch.”

In their recent update to their Community Guidelines, Twitch admitted they were being “too slow to act” when it came to governing on behalf of the safety of their streamers, and were thus “strengthening our stance on harassment and hate.” But DePass is not the first streamer to experience this targeted stalking behavior since the February 2018 Community Guidelines update, and she is not even the only one to experience stalking from Mosheddy themself. Mosheddy has also been targeting other marginalized members of DePass’s community.

And he just popped up in @HCLQueenGames stream, I didn't host, and I have my stream activity set to invisible. Which means he's following ANY and EVERYONE in my community to harass them @Twitch pic.twitter.com/s8KHziOi0M

Hey @Twitch, I know all you care about today is Ninja and his event, but this is day… what? 15?? And you still haven’t managed to take care of this individual? Mosheddy is harassing SEVERAL channels and you’ve been silent. pic.twitter.com/KOieouwmoe

Twitch has also been under some public scrutiny for its recent announcement that it will be tagging certain streamers with a “Smaller Communities” tag and recommending these channels to users for broader exposure. But broader exposure isn’t always positive—in fact, some say the tag will leave marginalized Twitch users more exposed to the abuse Twitch claims to want to combat. Though this change was ostensibly initiated to “support small streamers,” many, including DePass, are concerned this move will make marginalized streamers more vulnerable to abuse of the kind DePass has been experiencing.

Twitch is having some serious ongoing harassment issues, and the last thing anyone needs is being surfaced to the front page right now.

Hey @Twitch , unless you're going to actually do something about harassment your "smaller" streamers are getting, don't paint a target on people like this. At the very least include an option to opt out. https://t.co/uyCVbTK5aq

Considering y’all can’t it won’t ban someone stalking me & my community for clear TOS violations; I’m not surprised no one thought about how you’re opening up marginalised streamers to possible abuse with this. https://t.co/L9YJxv7SQV

Twitch has also recently come under fire for advertising large streamers’ channels to growing streamers’ current viewers, driving their viewers elsewhere mid-stream. Twitch addressed that issue after widespread backlash, but still have not suspended Mosheddy or addressed the fact that marginalized streamers are still facing harassment by users banned from their channels.

What, you actually thought running ads on smaller streams telling viewers to go watch Ninja was going to go over well?

Oh and hey now that this is handled, can we talk about the fact that blocked users can still stalk the hell out of streamers like @cypheroftyr or what? https://t.co/8gNVdCA1uC

With over a month of this abuse towards DePass alone, the question remains: what will it take for Twitch to acknowledge how easy it is for its malicious users to get away with harassing others, especially those in marginalized communities? If those users Twitch calls its Partners can be targeted with nothing done, what kind of protection can the rest of its users expect? Twitch needs to do better. Until then, it’s clear Twitch is more interested in fostering the appearance of being a safe space than in actually protecting its users.

And still nothing from @Twitch. Is there even a moderation team still? Because it sure isn't looking like it.

You can improve the platform, but that doesn't mean anything when people aren't protected.
Improved discovery? That also means more exposure & needs improved protection. https://t.co/UCS4RrvIDB

@Twitch//@TwitchSupport — think about the message you're sending with your inaction here. if tanya, a prominent streamer and figure in games can't get support with sustained harassment, what help can anybody else expect?

y'all this is Not A Good Look

I can no longer in good conscience encourage anyone to stream on @Twitch after this month of hell with nothing being done.