Rose-Colored Gaming: Kingdom Hearts Is For Babies (Like Me) 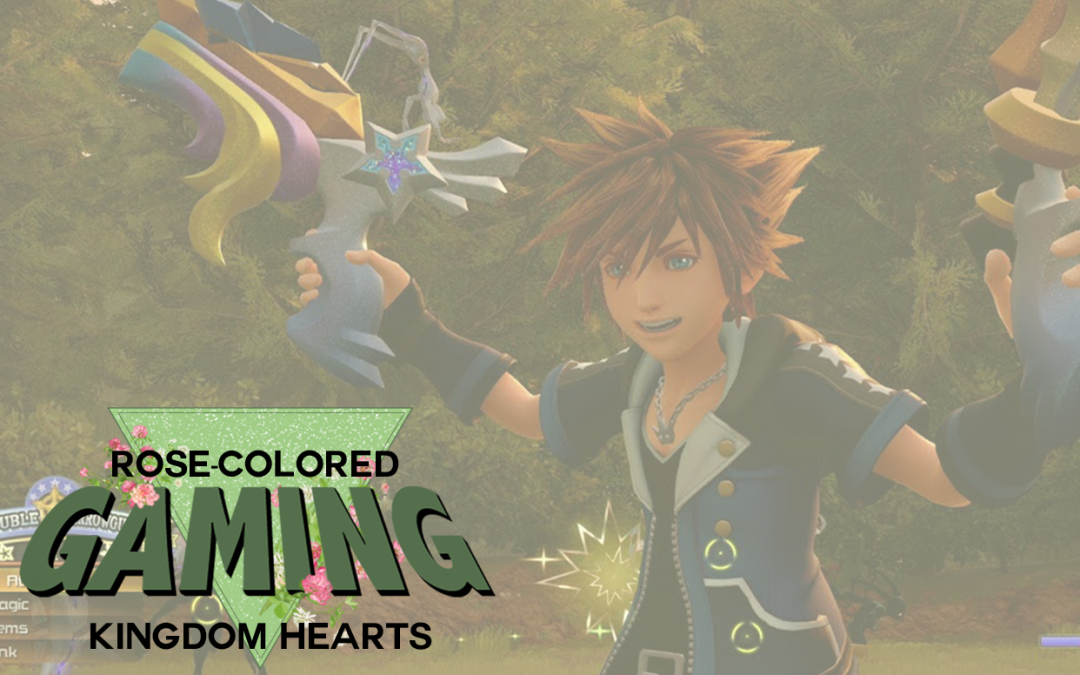 Welcome to Rose Colored Gaming—a series where I revisit games that fill me with nostalgia, via a critical lens. In this entry, I’m delving into Disney’s belt and zipper repository itself, Kingdom Hearts.

Look, anybody who knows me can tell you, I’m a child. I’m petty, and indignant, and filled with an angst tempered only by my inability to treat my edgelord nature with even an ounce of earnestness.

It is as a grown up child that I can say, without a doubt, Kingdom Hearts is exactly the franchise it needs to be. It’s wild, idealistic, and at times incomprehensible. Its combination of Disney and Final Fantasy aesthetics gives it exactly zero right to be anything more than meme fodder. And yet, across all of its games, it gave me more tools to cope with adolescent depression than anything I’ve played since.

I grew up with Kingdom Hearts. It’s connected to my friends and family in more ways than I can recall. My mom bought me a used copy of the first game on eBay, after I begged her for a week. My sister saved for months to get me the second one for my birthday (I still feel bad for trading it in days later). I met my very first con friends by complimenting their Axel fanart, and even today I am able to joke around about how delightfully silly the whole franchise is with the people around me. You bet your ass I have a copy on hand to lend to any kid who’s into RPGs.

I was 10 years old when I first put that disk into my PlayStation 2. I was about to enter 6th grade, marking the transition from elementary to middle school. Everything in my life seemed new; my friends and I experimented with adult things like eyeliner and boys, and between torrent of hormones and emotions it seemed like I was losing all control over my sense of self.

Even then, I wanted to be everything Sora represented. He was loyal, kind, and most of all he was fun. He represented the pure optimism of childhood, a refusal to acknowledge the darkness in the world as a viable path. One of my strongest memories of that time is regularly waking up early to fly around the Peter Pan world before school, just for the freedom of it.

The fact of the matter is, I probably have a stronger nostalgic connection to the Disney characters in Kingdom Hearts than I do from actual Disney properties. That’s certainly true for my pals Donald, Goofy, and the monarch of questionable capability, King Mickey. It wasn’t until after I played Kingdom Hearts II that The Little Mermaid became one of my favorite movies of all time, due in large part to my obsession with the rhythm minigame that made up the Ursula boss fight.

Kingdom Hearts took a series of loose (though ubiquitous) attachments I had to my childhood, and cemented them—expanded them. Those games, and the characters within, where there for me through one of the first major transitions I can remember. They taught me to stay true to myself, trust my friends, do what feels right, and above all listen to my heart.

It only took a couple years for those lessons to begin to feel trite.

As I reached adolescence, I found myself mocking childish ideals like those I learned in my adventures with Sora, Donald, and Goofy. I began craving something deeper, or rather, something darker. I wanted a game made purely of Hollow Bastions and Castle Oblivions. I wanted the Disney aspects to just fade away—to be replaced by the constant angst-filled melodrama of Sora and Riku’s love story. This was definitely a time I accused Kingdom Hearts of “having too much filler” for refusing to take itself seriously.

In the language of the games, my adolescent self gave into the darkness of their own heart. What started as teen angst became the ground in which my genetic predisposition to depression could take root. If I’d had a chance to play Chain of Memories or Dream Drop Distance as a kid, I certainly would have attached myself to Organization XIII’s darker cast of characters, identifying with the growing sense of emotional numbness that characterizes the Nobodies. (As it is, seeing blindfolded Riku in the secret ending for the original Kingdom Hearts awoke a whole new aesthetic for me.)

Replaying Kingdom Hearts in my 20s has been an eye-opening experience. As I continue to grapple with chronic depression, this game has helped me put into words that it takes strength to stand up to that darkness. Not one major character in this game doesn’t struggle with their own emotions. But eventually they all get through it, because they realize that having fun isn’t a weakness.

I don’t have the same uncomplicated identification with Sora that I did at 10. He fights to keep darkness out of the hearts of others—to protect the light and pureness inherent to his world—and I respect that, I really do. But my journey right now has me seeing myself in Riku, who struggles to see his darkness as a strength without letting it overwhelm him. I was surprised, having touched some of the more Riku-centric games for the first time this playthrough, that the villain-turned-melodramatic-antihero of the series is never left to struggle alone (a fact that he and Sora will scream at every possible opportunity).

I think my newfound Riku-ness reflects me maturing as a person, and Kingdom Hearts seems to have matured along with me. Every time I replay it I find new ways to look at life, friendship, light, and darkness. The game and I are both imperfect—sometimes impractically idealistic, sometimes prone to melodramatic nonsense. But I think it was exactly what I needed as I started my slow transition to adulthood.

That being said, I’ve come to realize that even the remasters don’t always stand up to the test of time. The early games absolutely hate Kairi, which sucks because I’ve had a fan design for her Keyblade since my first playthrough, and the only reason Sora and Riku’s love story comes across so clearly is because neither of their female counterparts is given a character arc with them. With 17 years since the original release of Kingdom Hearts, the game is far older than I was when I first played it. The industry, and the lessons I need to learn, have changed a lot in that time. I have almost two decades of friendships under my belt, which I’m constantly reminded never truly fade away. I have this connection to a younger me, a sort of Donald and Goofy on my shoulder, reminding me to smile when things get hard. King Mickey promises me it’s okay to have darkness inside of me, as long as it’s held in check by an unflinching light.

Kingdom Hearts gets in its own way when it comes to presenting its central message (Kairi was sitting on that island an awfully long time after getting her heart back), but it’s still the core pillar of the whole franchise: no matter what happens, you can always rely on a touching speech about the power of friendship.

Kingdom Hearts III has an opportunity to open that message up in a lot of ways. To connect with a whole new generation of pre-teens, to make it available to more than just optimistic little Soras. It can teach a much wider range of kids that it’s okay to be silly, earnest, and unflinchingly emotional; that it’s okay to struggle with an inner darkness; that it’s okay for two childhood friends to share a paopu fruit, even if they’re both male (GET ON IT NOMURA).

I hope these lessons are still there for kids who need them, like they were for me. I hope Kingdom Hearts III takes its chance.

Read the rest of the Rose-Colored Gaming series here.