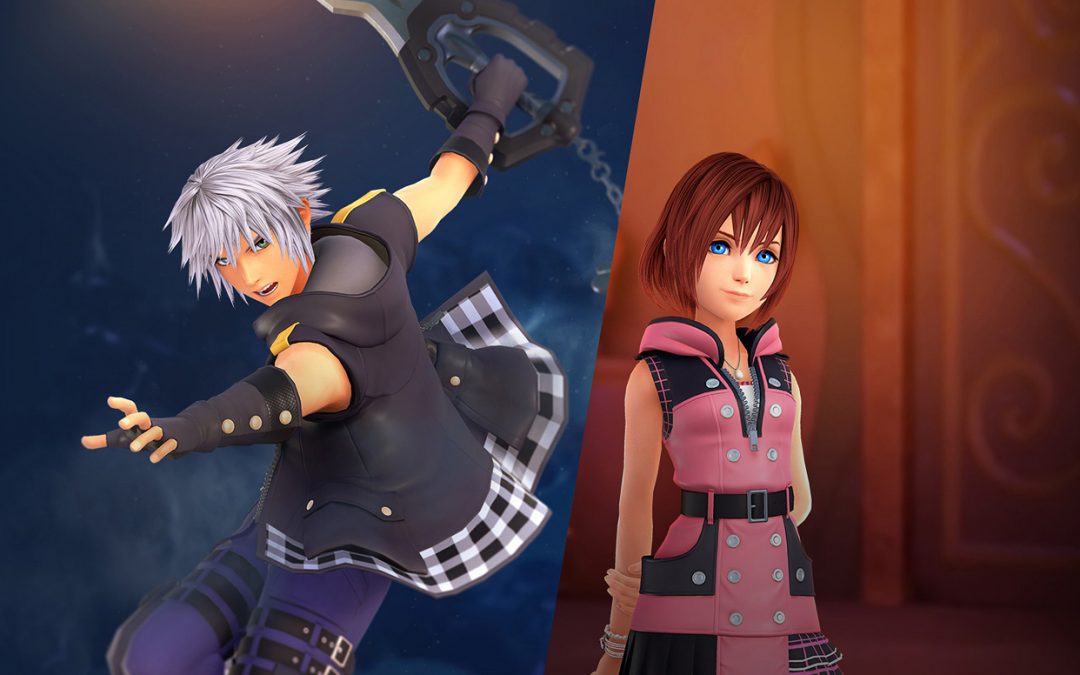 With Kingdom Hearts III right around the corner (I can’t believe it either), Square Enix and Disney are embracing the release with a marketing campaign the likes of which haven’t been seen for the series since the first game released fifteen years ago. So far, we’ve seen several trailers’ worth of sneak peeks at what awaits us, but until now demos for Kingdom Hearts III have only been playable by the lucky few (people with money and/or press passes) with access to the expos showcasing it.

Starting in December, Disney and Square Enix have been hosting their first ever “pop-up” shop for Kingdom Hearts III at Disney Springs in Orlando, FL. The event—which began on December 14th and runs until January 31st—will allow pretty much any fan who walks in off the street to play the demo of the game that, before now, has only been available at hard-to-reach expos. On December 29th, my friends and I finally launched ourselves towards Disney Springs to experience the event for ourselves. Having been a Florida resident just about all my life and living just shy of two hours away from the event, I was ready to soak up the magic Square Enix and Disney had in store for me. The journey itself, however, was not so magical.

Parking was a nightmare, as anyone who has ever gone near anything Disney-related can attest, and the walk from the parking lot across the street to the glorified outdoor shopping mall itself took about twenty minutes total. The pop-up shop was hard to find, and we had to get directions from park attendants and other fans before we were pointed towards a small, nondescript building with a little sandwich board advertising the game outside of it.

Although I expected a line out the door, it was surprisingly easy to get into the shop. There were maybe twenty or so people meandering throughout, with another group off in the demo section engrossed in the gameplay. In order to play the demo, we left our name on a digital list that would alert us via text when it was our time to play (hence the reasonably empty shop) and set about exploring the rest of the store.

Large murals decorated the walls, depicting the characters and worlds confirmed so far for Kingdom Hearts III, such as Anna and Elsa in Arendelle, Rapunzel and Flynn in the Kingdom of Corona, and the cast of Monsters, Inc. in Monstropolis. There were also murals showcasing renderings and game box art of the core cast of characters, such as Sora, Riku, and Kairi.

The windows were lined with display cases showing off action figures of characters like Sora and Aqua, as well as life-sized models of the Kingdom Key and Shooting Star keyblades, two of Sora’s weapons in the series. One of the cases held a keyblade made out of a cactus wearing a cowboy hat. Presumably, this is the keyblade that Sora will be rewarded with on completion of the Toy Story world in the new game.

Since players are able to pre-order the different package versions of Kingdom Hearts III within the shop from small tablet kiosks, examples of the merchandise that comes with the pre-orders were on display. This included a cute sticker set showing the names of the worlds in the game and a lanyard, all of which are exclusive to a pre-order placed through Square Enix’s site. We also managed to get a closer look at what comes with the Deluxe editions of the game, such as the artbook, pin, and action figures of the main cast. 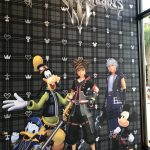 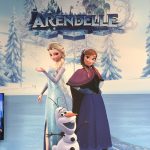 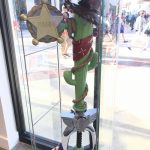 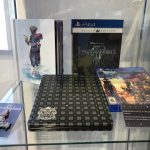 Not surprisingly, the wait to play the game was an hour long, and playthroughs were conducted in large groups of around twenty people every 15 minutes. About half of the shop was dedicated to PlayStation 4 and Xbox One consoles running the demo, and a smaller section even had some chairs and couches for players to relax in as they played.

At last, we were herded into a waiting area with our group made up of players, friends of players, and some parents with kids. Two employees gave us a pep talk for about five minutes and let us know what to expect. They warned us that while it was possible to complete the demo in the fifteen minutes allotted, it could only be done if we skipped the lengthy cutscenes (we did). The employees were clearly enthusiastic about the game, and it was a great experience to find ourselves among other fans who were as excited about this moment as we were.

Sadly, video recording of the screens was not allowed, but I did take several pictures of my friend playing the game, per Square Enix’s iron-fisted allowance. 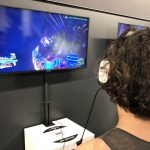 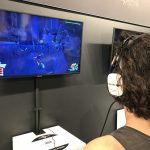 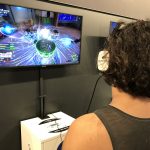 Another “Attraction” players can trigger, the Teacups 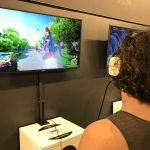 Buzz, Woody, and Sora’s Limit has them blasting off on a rocket

Booting up the game, you’re given the option of playing through the Colosseum or the Toybox worlds in whatever order you’d like. We chose the Colosseum first and were thrown into a boss fight with a massive rock titan in the pouring rain. The game played smoothly and combat flowed easily between basic attack combos and the fancier things you can do in the game, like Limits.

The rendering looked incredible, and the difference in graphics between Kingdom Hearts and Kingdom Hearts III is absolutely mind-blowing. The detailing on the stone cliff slick with rain looked almost realistic but still stylized in a way that kept the game from taking on a dullness found in many hyper-realistic games today.

In the Toy Box area of the world, we were shrunk down into toy size and had to fight our way out of Andy’s Room before heading to Galaxy Toys. At the toy store (after skipping another cut scene), we hopped into a battle with some possessed toy robots, jumping into and out of them like mechas for tiny toy Sora to pilot. Again, combat was engaging and it was easy to fall into the rhythm of jumping into a robot and blasting the other heartless before moving on to the next.

One of the new features in the game is the ability to trigger “attractions,” versions of popular carnival rides. Although there appeared to be a total of five attractions we could trigger, we only managed to trigger three: glowing teacups, a brightly-lit pirate ship, and a colorful train. The attractions allowed us to attack enemies in different ways, such as spinning the teacups into the heartless to destroy them. There were no summons available, though we did manage to trigger Sora, Buzz, and Woody’s joint Limit, sending them speeding off towards the heartless in a rocket.

Although I previously reported that there didn’t seem to be loading screens this time around, with travel from area to area being marked by a simple title card at the bottom of the screen, we found this was incorrect. When crossing large distances to get from one point of the world to the other, the game goes into a black loading screen, such as in the transition from Andy’s house to Galaxy Toys.

It’s uncertain whether the music in the demo will be the final music for the game, but most of the tracks heard were new arrangements of songs found in previous games, such as “Hand in Hand.” A new piece of field music we did notice was an arrangement of “You’ve Got a Friend in Me” playing during the Toy Box exploration.

While in the past areas in the worlds of the Kingdom Hearts games have seemed a little empty and devoid of objects to interact with, there was a lot to look at in each area we were in, with every piece rendered in loving detail. We also found that the gameplay controls were familiar to those of us who have played a Kingdom Hearts game before, but also easy to grasp for those of us who haven’t.

Once we wrapped up our fifteen minutes of playthrough, we headed to the Starbucks at Disney Springs to see if we could get our hands on the famed Kingdom Hearts-themed specialty drinks that were advertised when the pop-up first opened. 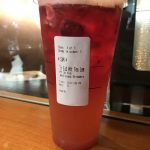 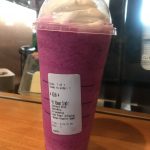 Although the drinks were no longer being advertised, they were still in the system as of December 29th, and the baristas had no trouble whipping them up for us. My friends ordered a “Unitea” (strawberry lemonade tea with passionfruit on top), while I ordered a “Friendship Fruit” (a vanilla coconut concoction with passionfruit in it as well). Both were fruity, delicious, and although probably not worth the exorbitant price tag, it was all a fun part of the day.

Limiting the pop-up to a single city in central Florida vastly limits the number of fans that can access the demo, but it’s opened up the possibility for many more players who may be undecided about buying the game or aren’t familiar with the series at all to try it. While the Kingdom Hearts III pop-up shop event was a little tiring and difficult to reach, it was well worth it to get a sample of what we have to look forward to on January 29th.