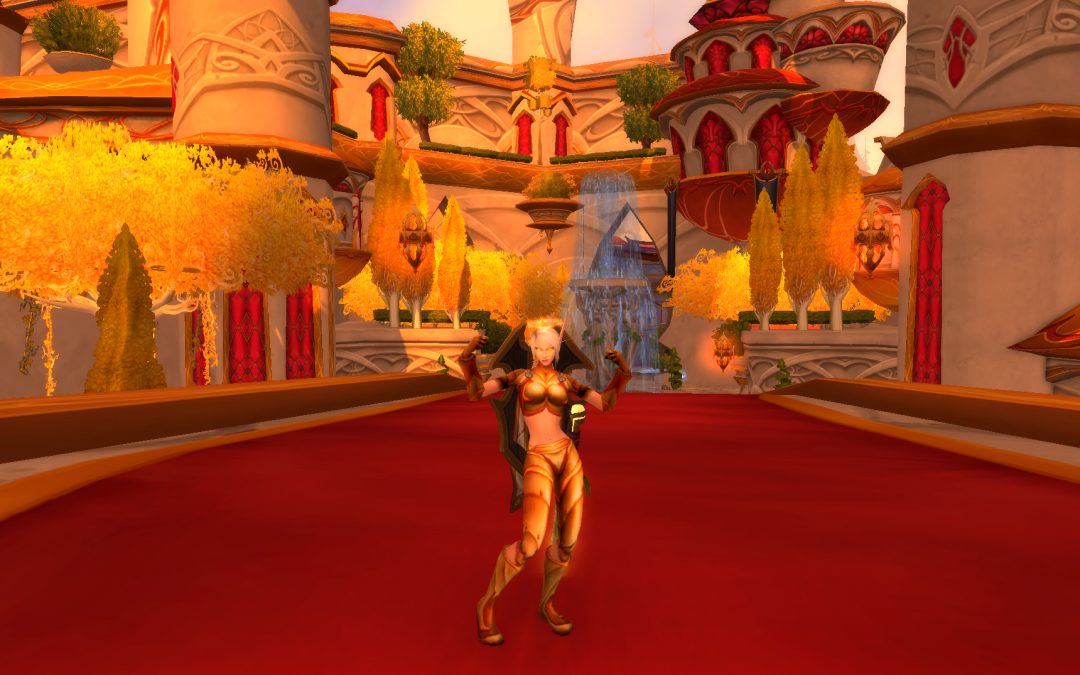 It’s a frustratingly common sight in online games if you’re often perceived as femme or feminine. One casual interaction that leaves your teammates thinking they know your gender and now you’re being whispered to take off your armor and make your character dance; someone you’ve never met before heard your voice in chat and now they want your Steam ID and Battle.net tag so they can “hang out sometime”; you’ve got some twelve-year-old on a mission to call you every gendered slur his prepubescent brain can cook up. I’ve been playing MMOs for the last 15 years and, let me tell you, I’ve really heard it all.

If there’s one good thing (if we can call it that) about my experiences so far, it’s that I’ve learned a thing or two about anonymous video game interactions. The first, and perhaps most important lesson I’ve learned so far, is that men are sensitive. They feel threatened by things outside of the norm. It’s easy to not bat an eye when another masculine voice pops into chat, but the first time they hear something they think is feminine, well, that’s when things change.

It’s childish and absurd, absolutely, and it’s also exhausting. In an ideal world, they’d keep their mouths shut and just play the game like they’d been playing it, because nothing has actually changed. That seems harder for them to do than it sounds, and some days, I’m just too tired to deal with that. Men need to be better, as a general rule, but I want to feel safe. As much as it sucks, there are certain things in online games that will make other people jump to conclusions about who you are behind the keyboard.

Men need to be better, as a general rule, but I want to feel safe.

So I want to share with you the considerations I go through on a day-to-day basis to ensure my online interactions are as neutral, non-aggressive, and pleasant as they possibly can be. It shouldn’t be my job to create safety like this when I’m not the one making it unsafe, but I take these steps anyway, because I’m just tired. By talking about these steps, I want to bring some light to what it’s like from my point of view—the level of self-censorship, the thought process that goes in to every decision I make in game, the hesitation whenever I’m typing out a sentence to make sure it matches the image I’m trying to portray.

1. Before all else: Leave voice chat.

Proximity-based and auto-joined voice chat are the enemy, made even worse when the game has its own brand of voice chat baked in and decides that push-to-talk isn’t the obvious default choice. When you boot up that brand new multiplayer game, jump into settings and turn off any setting that touches on voice chat before you head into a match.

2. If you’ve got no choice but to join voice chat, tell ’em your mic is broken.

This works just about every time. Trying out for a new raid group in preparation for World of Warcraft‘s patch 8.1? Voice is going to be key to making sure everyone is working as a team, but that doesn’t mean you have to talk. Hit that mute mic button, tell the raid leader you don’t have a mic, and answer all verbal communication in chat. It’s more work, but it’s wonderfully gender neutral, and you still get the benefit of hearing mechanics being called out.

I’ve made my fair share of skimpy armor sets for my characters—because I like it, for one, and because it’s not like WoW and Final Fantasy XIV give me very many options otherwise—but in my experience, this is a recipe for unwanted private messages asking you to undress your character for their viewing pleasure. I really can’t explain it, because there’s nothing stopping them from making a female Blood Elf of their own and parading around town in a plate bikini all day, but I’ve gotten so many PMs like that that at this point I just slap a tabard over the bikini and call it a day.

4. Carefully read everything you write in chat for tone.

If you work in an office environment or anywhere that sends emails all day long, you’re probably already pretty familiar with this one. There’s a litany of questions that normally go through my head before I decide to press send on a message to raid chat: Was it too “girly” sounding? Was I too bossy? Did I use words that would give me away as femme? This goes hand in hand with the “quick, Google it to make sure I’m right because I can’t be wrong” method I employ whenever talking about game mechanics or bosses, etc. As a person of marginalized gender, being wrong has a whole different context here—you’re wrong because you’re not a man, not just because you didn’t remember, or because it’s a complicated fight and you haven’t done it in six years since this old dungeon released.

5. Avoid gendered words when referring to your personal relationships.

When I play games, I normally partner up with my SO in any way possible, such as by co-tanking raids, healing his tank in dungeons, or just running around doing quests together. I’ve learned the hard way that “husband” or “boyfriend” are bad words, resulting in either an immediate response of “lol are you gay” (and all of the just delightful interactions that follow) or everyone deciding you’re a girl and shaping all subsequent interactions with you in kind (see opening paragraph for samples).

The onus should not be on me, or you, or anyone else of a marginalized gender who might be a target of harassment, to take these steps.

6. Video games are rife with stereotypes, and if you decide to main healers, you’ll almost always be assumed to be femme.

Statistically, this one might even be true, I really don’t know, but what I can tell you is that maining Mercy in Overwatch or playing White Mage in FFXIV almost always gets me slapped with feminine pronouns. It also almost always leads to the usual “lol girls only know how to heal” mentality I’ve dealt with even in my group of IRL friends. If you love to heal and love to play those sorts of characters, please keep doing it (I do), but know that you’ll have to put in some more legwork in the first few categories as a result.

7. Finally, underplay your love for cosmetic items in games.

Love to collect companion pets? Hey, me too! I have nearly 800 of them in World of Warcraft, and it’s absolutely something that’s earned me some criticism, because it’s very much perceived as a feminine hobby in game. I couldn’t even begin to tell why that’s a thing, but I’ve found that I’ve had to downplay my love for cosmetics to avoid that assumption.

So, let’s recap: to avoid those awkward conversations and ensure you’re in for the most neutral gaming experience you can, just avoid all gendered words, don’t get in voice chat, pretend you don’t like the stuff you like nearly as much as you do, and avoid engagement as much as possible. This is what I think about any time I am knowingly going into a multiplayer experience in an online game, especially one with mandatory communication for success.

The onus should not be on me, or you, or anyone else of a marginalized gender who might be a target of harassment, to take these steps. The responsibility for these problems falls squarely on the shoulders of the people who think it’s funny to call out that I’m feminine, or who are genuinely angry that I exist in their game space, or who want to make inappropriate comments about my character model. They need to be better, and I hope, by writing this, that maybe at least one person will realize, “wow, look at how this person has to completely change their entire gaming experience to avoid confrontation because of me. I should stop being That Guy!”

I’ve been through enough at this point, though, that I’m not holding my breath.