Rich in Friends: Finding All 900 Koroks in Breath of the Wild 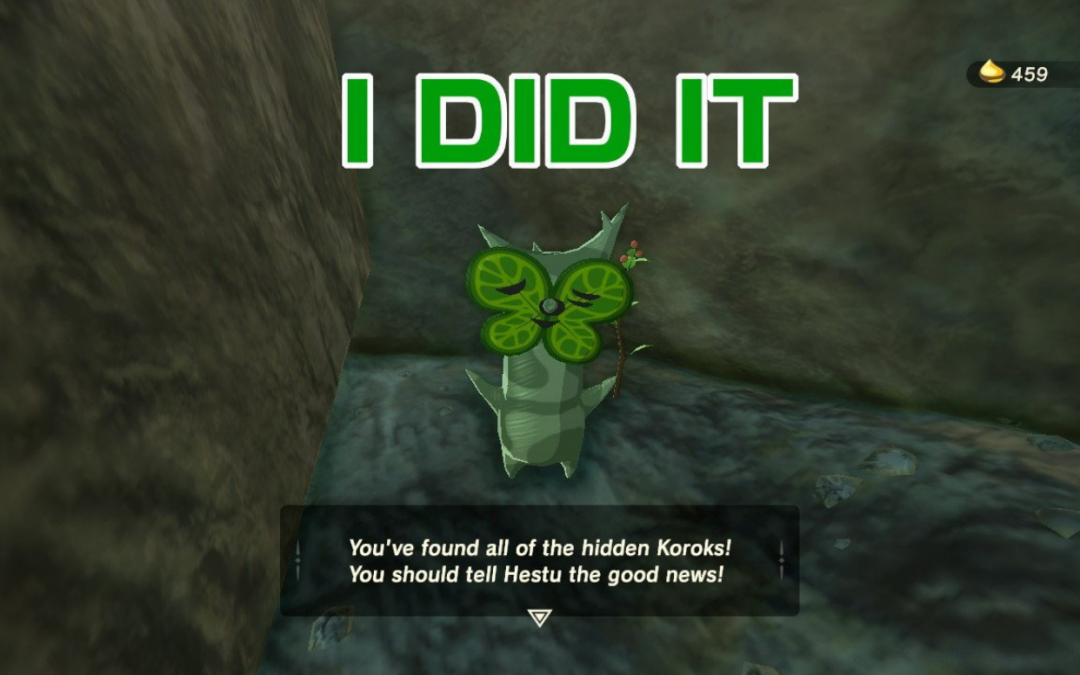 Sidequest complete: after over a year of playing The Legend of Zelda: Breath of the Wild, I finally found every Korok in the game.

I started playing Breath of the Wild in the summer of 2017, just a few months after it was released, and right around the one-year anniversary of graduating from my master’s program. Since graduating, I had only been able to find part-time and temporary work at a couple jobs (one of which was in my field, at least!). I was poor financially but rich in free time… especially during the day, when my roommate went to her full-time job and left her Nintendo Switch unattended! (Don’t worry, my roommate was cool with me making my own account on her Switch and playing games when she wasn’t around).

[The Legend of Zelda: Breath of the Wild spoilers: This piece will mention a few specific Korok locations, but is not a guide to Korok hunting.]

I had played other games in The Legend of Zelda series before: Ocarina of Time as a child, Wind Waker as a teenager, and Twilight Princess over one winter break during my undergraduate studies. I figured I would like Breath of the Wild. Right from the beginning, I knew I’d get hours of enjoyment out of this game. The world is beautiful and vast with little idiosyncrasies that tickle the same part of my brain as sitting on a hillside or exploring the woods. This is a very useful trait in a hobby when you aren’t leaving your apartment very often.

The beginning of the game is more guided than the rest, but I still loved exploring the Great Plateau as Link and completing tasks for the Old Man, the mysterious stranger I met shortly after waking up from a 100-year slumber. It was here that I found my first Korok. I approached an old ruinous building that I had recognized immediately from playing Ocarina of Time. I climbed the Temple of Time, where I completed the last of the Old Man’s tasks and gained the paraglider, which lets you finally leave the Great Plateau without taking fall damage and dying. But I wasn’t done. Climbing was such a delight to me in Breath of the Wild, especially considering in previous The Legend of Zelda games I couldn’t even jump. I’m the type of gamer who wants to explore every square foot of a map and find every secret. Big architectural structures like the Temple of Time had always taunted me—was there something special awaiting a player who was coordinated enough to get up there with the limited moveset Link had?

Now that I was just pushing a joystick and going up, I didn’t need to be one of those super-talented gamers to find out. I figured it was so easy, surely my only reward would be peering out to the horizon to appreciate the vast map once more. I shimmied up the steeple to get to the tallest point… and suddenly, there was a shimmering cloud of leaves. A text box with “Examine: Press A” appeared when I got close.

A pop of leaves and sparkles, a jingle of wooden beads, and there it was: the leaf-masked species I recognized from Wind Waker, a Korok. “Ya-ha-ha! You found me!” it said, greeting me like a childhood friend. “Huh? You’re not Hestu! But you can… see me? I didn’t know your kind could see the children of the forest!” Of course I could see them. Link grew up with Saria and the Kokiri in Ocarina of Time. I grew up exploring the woods and creeks of rural Illinois and suburban Ohio. It made total sense to me. My favorite place to explore as a child, improved by magical woodland sprites.

“Well, if you run into Hestu, please return this to him.” I was bequeathed with a precious and distinctly smelling seed (according to the item’s flavor text). I had no idea who Hestu was, but I was excited to find out.

I followed along the game’s main quest path and eventually met Hestu, a large tree-like Korok who carries maracas. He informed me that there were 900 smaller Koroks hidden across the map, essentially playing a huge game of hide-and-seek. Each Korok had a seed it would give to me once I completed a small environmental observation puzzle (which are basically my favorite kinds of puzzles), such as placing a rock in the right way to complete a pattern or shooting down an inconspicuous balloon in a tree’s hollow.

As I brought the seeds to Hestu, he added them to his magical maracas and used some of his magic to repay me by increasing my weapons storage capacity. Although players don’t need to upgrade their storage at all to complete Breath of the Wild, having more options for swords, shields, and bows was definitely useful for me. I imagine most players opt to hand in at least a couple Korok seeds to get more item slots, and others probably turn in all 441 Korok seeds required to completely max out inventory space.

I was able to accomplish this after a few months of keen eyes and intuition. Then I wondered… what are the other 459 seeds for?

October 2017 came before I knew it, and with it, mostly good things: perfect autumn weather, my 27th birthday, Halloween… I participated in #Inktober (a social media challenge to draw/paint one picture a day with an ink-based medium) by creating fanart from Breath of the Wild. I barely noticed the one-year anniversary of getting a job that had no upward mobility or hope for better wages.

I finally beat Calamity Ganon, the final boss, about a month into 2018. The battle was pretty straightforward, as many other gamers’ accounts will tell you. I had been hesitant for a long time to enter the castle and confront the big bad. Not because I was afraid I would be defeated, but more that the game would finally be over. I have a habit of not finishing games, always leaving just a little bit more for myself. This usually backfires into me being so reluctant to finish that I eventually move on to the next game or activity without a conclusion. With this in mind, I decided to bite the bullet and play through the boss battle. Besides, with save states, I knew I could always go back to a previous point in the game to continue exploring and collecting Koroks!

By the time spring rolled around, my roommate had purchased various downloads for the game, giving it more challenges and items. Most importantly, this introduced the Korok Mask into the game, a wearable item which jingles when you are close to a hidden Korok. At first I considered foregoing the mask for a completely solo hunt… but upon self-reflection, I realized it would actually be a big enhancement. Picking a potential location on the map only to find nothing was irritating enough to put me in a bad mood, and I wasn’t about to tire myself out just to complete a totally self-imposed goal.

Through the late spring and early summer, I found the final 200-something Koroks. The last 50 were so hard… It got to the point where I could only find one or two a day. My friends would often ask me how my progress was going, wonder about my methods, and marvel at my persistence. I would mark places on the map, and then check if there was anything there on the internet before going through the process of searching and being disappointed.

After hard work and clever uses of resources, on July 11, 2018, I finally found my final Korok. Carefully stealthing past the deadly beams of Guardians (ancient tech sentinel robots who roam around certain parts of the world), I headed to a rocky formation just north of the Quarry Ruins in upper Hyrule. There, hiding under some rocks I needed to bomb away, was the last of them.

“You’ve found all of the hidden Koroks! You should tell Hestu the good news!” it said to me. My roommate was watching me play out these final moments. She even tweeted one of our exchanges while I was heading to turn in my final seed. After arriving at Korok Forest, I gave my big Korok friend his final seed. In return, he gave me Hestu’s Gift, which essentially is a golden poo emoji. The item gives you no power-ups and has no monetary value, a fact which has probably bothered some gamers. But that wasn’t the case for me.

After tweeting about my progress, I got a surprising amount of congratulations and support from people who follow me, especially personal friends. Riding the high of following through with something, I decided to follow through with something else. Within the same month, on July 30, 2018, I got my first tattoo to commemorate my achievement: a Korok floating on a long-stemmed leaf down the center of my upper back.

When people see the tattoo, they assume it’s because I think Koroks are cute or love The Legend of Zelda games. While they aren’t wrong, for me, it is more than that. This game wasn’t about suffering or being stubborn or falling into my same old patterns. It was about finding these cute creatures while enjoying the beautiful scenery. It was about finally completing a task in a video game, especially a large one. It was about feeling proud of myself for taking the time to relax.

I was extremely lucky to have access to the resources to play the game, despite my financial insecurity through most of my playthrough. Getting that final golden poo was a reminder that my adventures are not about the destinations, but about the friends you make along the way—human or Korok.