Revisiting the Conversations of ‘Emily is Away’ 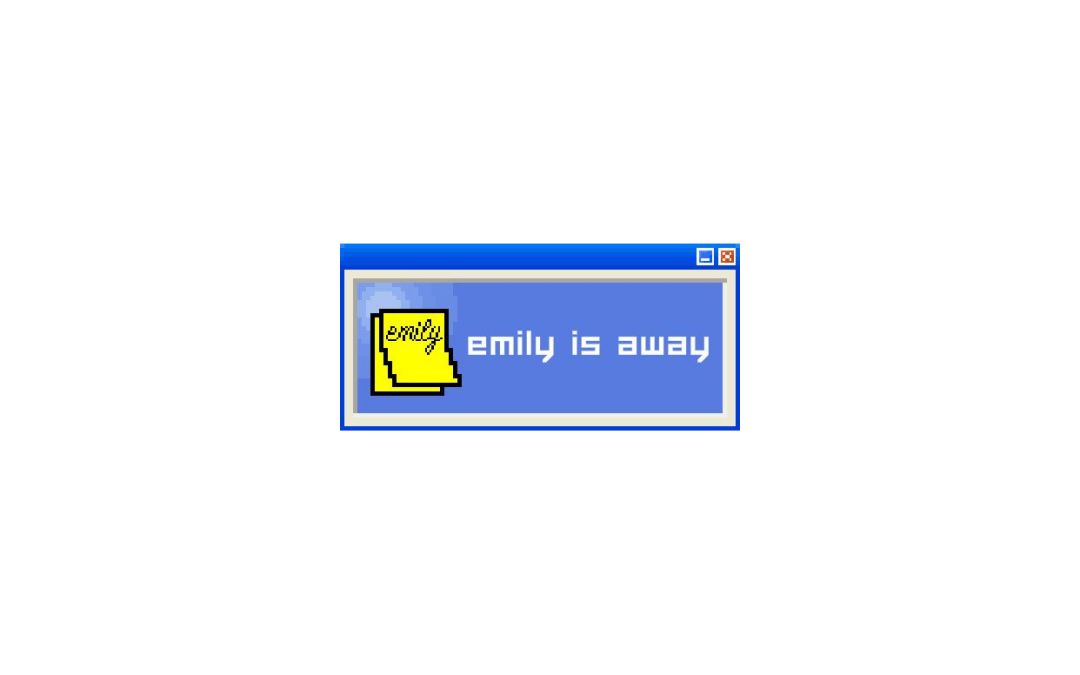 As a teenager, I spent a lot of time on chat messengers talking late into the night, attempting to decipher friends’ cryptic (or not so cryptic) statuses, and navigating complex and awkward relationships online. So, when I stumbled upon the free indie visual novel Emily is Away (2015) by game developer Kyle Seeley, I felt almost as though I had fallen through the computer screen and right back into my own past. Playing through the linear narrative via the chat messenger and experiencing the difficult changing relationship between my (female) protagonist and Emily over the course of five in-game years prompted a lot of messy nostalgic feelings around queer teenage relationships which I found really interesting.

However, when looking through reviews of the game to see what other players thought, I came across a popular essay written by influential games writer Bruno Dias, as well as an earlier response to the game by game designer and Interactive Fiction Competition judge Emily Short. In both responses, Dias and Short rightfully raised concerns over a sexual encounter between Emily and the protagonist in Chapter 4 which could be interpreted as non-consensual due to narrative ambiguity, and which ultimately framed the protagonist as a ‘Nice Guy.’

As part of this, both Dias and Short clarified that although the game doesn’t require you to enter a gender and you can self-identify your character as female or non-binary through the choice of your name, they had read the story as strictly heteronormative due to both feeling that nothing in the narrative suggested otherwise. Yet, their interpretations differed greatly from my own in that a queer relationship between my protagonist and Emily had been central to my game story, and I hadn’t read the sexual encounter between them as non-consensual.

For me, these differences raise so many thought-provoking questions about video games, player experiences, marginalized identities, and how we ‘read’ video games. Can we read Emily is Away as a queer game, or does the default linear narrative only offer an interpretation of abusive relationships between men and women? Does the absence of non-dialogue writing, or “actual writing” as Dias called it, result in a shallow video game that doesn’t offer players any ‘real’ takeaways from the game? Or does the dialogue-based narrative act as an emotive storytelling mechanism focusing on feeling rather than telling? Whose experience reflects the ‘true’ narrative of Emily is Away? Can we say there is ever a ‘true’ narrative, or can multiple interpretations coexist together to create an ongoing dialogue around video games? Emily is Away is a short visual novel taking place exclusively via messenger chat through conversations with your friend Emily. When you start, you are told it is 2002 and your senior year at high school. You have to choose a username, your character’s name, and a noughties-themed avatar in order to “log on” and start the game.

The absence of an explicit, predetermined gender set by the game and reinforced through the narrative gave me a sense of freedom to interpret my character and their relationships. During my first playthrough I chose to play as a ‘female’ character (true playthrough) and did a second playthrough as a ‘male’ character (experimental playthrough), making different choices both times to see how it would change my relationship with Emily.

During my true playthrough, I constantly chose options to support Emily when she was experiencing difficulties with her boyfriend and feeling isolated. When Emily insisted that visiting me at college would make her feel better I happily accepted, even though it meant cancelling on a girl I was seeing. I failed to set any boundaries before her visit, although I insisted that she shouldn’t bring any alcohol. However, this choice sets in motion a story branch where the protagonist and Emily end up having sex. In a later chat conversation, Emily admits that she regretted this happening and felt that she was taken advantage of. I supported her when she opened up about how this encounter had made her feel and tried to express my love for her, even though the game mechanisms prevent you from doing so by deleting everything you type. In the end, the relationship appears to be beyond repair. For my protagonist, there were too many ends left loose and she ends the conversation, leaving me (and my character) feeling resigned, sad, and empty.

Upon finishing, I immediately replayed the game out of curiosity to see if I could change the type of relationship me and Emily could have. This time I played a douchey bro boy who constantly referred to all other men in Emily’s life as jerks, refused to meet up with Emily at a party or allow her to visit, didn’t support her during her relationship struggles but instead spoke about his new friends, and denied Emily the space to talk about how this made her feel (resulting in Emily logging off at the end of the game when you message her to say hello during the last chapter).

Although the outcome is always the same in that your relationship with Emily will become irreparably damaged, the way that I chose to interact with her changed the entire feel of the game, Emily’s attitude towards my character, and the nature of the ending. During the final scene of my true playthrough as a female character, the unspoken tension between my character and Emily was thick and emotional. Watching my character try to express feelings for Emily, typing out questions such as ‘will we ever be the same again,’ only to delete them moments later to ask a mundane question instead, viscerally echoed my own experiences with my best friend. Those moments of desperately wanting to express your love and concern for someone but being afraid of the response defined my own relationship. Despite my characters’ obvious feelings for Emily, she remained distant, and as a result, my character ended up logging off (rather than the typical chapter endings where Emily always logs off). However, if you refuse to allow anything to develop between you and Emily, then she will always refuse to talk to you in the end and will log off as normal.

When reading through Dias’ article on Emily is Away, my attention was immediately drawn to how different our playthroughs were and how that determined our experience of the game. Video games can be a fantastic tool allowing us to walk in the shoes of another in a way that isn’t possible through books or films. That isn’t to say that these formats don’t produce hard-hitting stories which can deeply affect their audiences, but video games allow us to experience things directly through the protagonist’s eyes.

This is particularly true in choice-based games, as we are frequently in control of their experiences—how much they suffer, who they fall in love with, what allies and enemies they make, whether they live or die—and this can entirely change how players feel about different issues.

In the case of Emily is Away, I found that the decisions I made produced an emotive narrative about two young girls who were struggling to navigate their difficult relationship via messenger chat, mirroring my own early relationship with my best friend. Where Short and Dias could see a heteronormative relationship, I could see a queer relationship. Where they saw a concerning sexual encounter that wasn’t called out by the game, I saw a reflection of my own romances as a young person where I attempted to clumsily navigate the stormy seas of communication and relationships. To be clear, I don’t think that there is a ‘wrong’ or ‘right’ solution to the game, just as I think that there isn’t a ‘wrong’ or ‘right’ interpretation of the game. Regardless of your actions towards Emily, your relationship inevitably disintegrates. It doesn’t matter if you don’t let Emily visit you at college, whether you allow her to visit but set firm boundaries as friends, or whether you allow her to visit, don’t set any boundaries, and end up having sex.

To me, this inevitability and lack of control was one of the key takeaways from the game, which spoke to me on so many levels. Following the end of my relationship with my best friend, I spent many years agonizing over whether I could have done anything differently, as I’m sure many of us do, but the realization for me that there was very little that I could have done to change the outcome was an important step in my own development. I feel that Emily is Away speaks to that process of learning, of growing up, and of reflecting on the past.

Dias’ essay and Short’s post were incredibly important for critically analysing and kicking off vital conversations about the game, its origins, and its contents. In the comments section of Short’s post, she posted a response from Kyle Seeley to the concerns that had been raised where he stated that what happened between the protagonist and Emily wasn’t rape, but was meant to illustrate a type of relationship where things progress too quickly, end up getting awkward, and ruin the friendship, and admits fault in not having made this more explicit in the game. Kyle’s response isn’t perfect by a long shot—in fact, although he says that there are no wrong or right ways to play the game, there are times when he is dismissive of Short’s valid interpretation of the story.

Like everything, playing and interpreting video games is a subjective practice, one that is shaped by our own identities, assumptions, privileges, and lived experiences. Personally, this is one of the joys of being a critic and reviewer, and it is imperative that we recognize the importance of everyone’s perspectives. By continuing the discussion of Emily is Away, it is my hope that it will highlight that there is not one narrative truth, but many truths, and that these truths can coexist in all their diversity and enrich our understandings of and approaches to video games.

Avery Delany is a diverse book blogger who has recently convinced the ivory tower of academia to let him study video games as research. When not reading books, playing video games, studying, or talking about these, Avery can be found submerged in a blanket cuddle pile with his rescue dog.