This Beanie’s For You: CLOAK, Parasociality, and the Search for Belonging 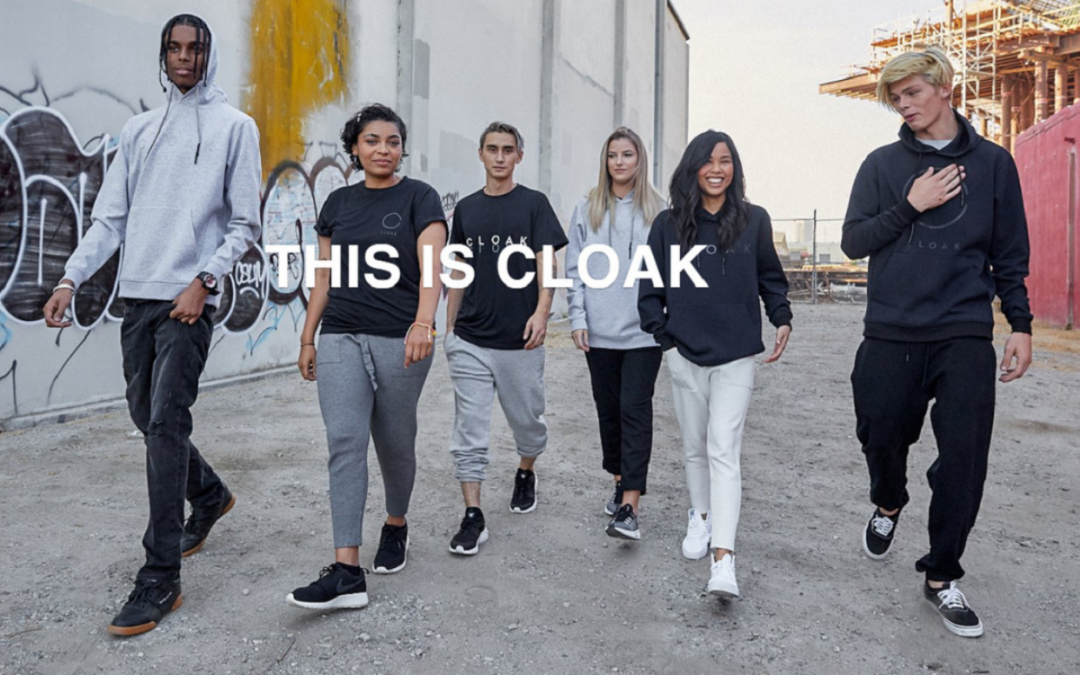 When Mark “Markiplier” Fischbach and Sean “Jacksepticeye” McLoughlin, two of the most prominent gaming YouTubers in the world at 22 and 20 million subscribers respectively, launched their CLOAK brand of athleisure wear for gamers, an interesting reaction sparked up from the ashes of its release. Selling the product line to the public as a long term dream of theirs, and the high-end brand was immediately snapped up, selling out of its pre-order run within a half a week. But its basic designs, dubious quality and bizarre “It’s for you but not for you” parasocial marketing mission has caused as much skepticism as it has success. Taking a deep dive into CLOAK and what it offers pre-launch, one meets the cults of personality around both men and sees what it is to milk YouTube in an age where sincerity creates cash.

“They have to look cute.” — Paid spokesperson, CLOAK advertisement video

The brand’s current claim to fame is simplicity: its spare, austere aesthetic, its sense of exclusivity and lightweight designs, which are apparently supposed to give gamers both an elite clothing cache and be practical and comfortable to wear. Markiplier says in the company’s mission statement video that he wants to create a subtle clothing line without huge branding… but CLOAK’s logo is plastered across the chest of its t-shirts like a billboard.

Nothing on the CLOAK website retails for under $20, and most items’ costs are set at thirty-five dollars or more. The beanies, that $20 item, at press time is the only item of clothing that’s sold out on the website. While shipping is inexpensive depending on how much you buy (as little as $6 for a beanie or as much as $9 for two hoodies), it’s double that for anyone outside of the contiguous United States. Compare this to brands such as The North Face and Adidas, two of CLOAK’s main competitors in the athleisure business: while they are comparative pricewise, the larger companies have two things that CLOAK does not—their clothing is made, per capita, out of a higher amount of cotton and they have carefully delineated locations from which they are importing and manufacturing their materials. CLOAK has not released the location where their clothing is being manufactured, only where it will be shipping from; there is no word on whether it’s being imported or is American made. It’s also fairly easy to get prestigious, well-known brands at retail shops like Nordstroms at a cut rate. The only slack CLOAK is willing to cut its first wave of customers is free shipping for any order over $100—and only a single product in their line was over a hundred bucks, which means fans would have to buy at least three t-shirts to hit this discount.

As for breathability and comfort, the majority of CLOAK’s products are made out of 75 percent polyester, a material that is not known for its breathability; spandex tends to be the second-highest listed material on the site. Only its four hoodies are made of cotton, and none are pure. Some fans seem to believe they’re getting higher quality clothing out of the arrangement, but this doesn’t seem to be true. The highest compliments delivered to the brand’s first recipients is that the shirts don’t ride up, the seams hold under moderate activity, and the shirts are tagless. While the company’s goal to make comfortable clothing seems to have been reached, nothing about recent reactions from the fanbase suggests that the clothing is in any way different from any other athleisure brand.

The excuse Markiplier and Jacksepticeye have floated for the exorbitant prices of the line and the combination of materials used is that they are made out of custom material, which is custom sewn and cut. With no maker or importer listed on the website beyond the fact that the company’s warehouse is in Los Angeles, it’s impossible to ascertain such a claim. When asked in a live Youtube AMA, Markiplier also stated he has no idea who designed their logos, something a company toting “custom-made clothing” should at least have a grip on. Jacksepticeye has gone on to separately claim that they are manufacturing the clothing ethically—but has offered no proof that this is true as of this writing. In fact, the process of manufacturing polyester, which is non biodegradable, can cause significant environmental damage.

Most damning of all, CLOAK has a section to which fans are allowed to submit their ideas and designs for CLOAK products—and the legalspeak at the bottom of the page informs them that they will not be reimbursed if their suggestions are picked up by the company.

The most interesting part of the entire dust-up has been watching how Jacksepticeye and Markiplier have employed the intensely close parasocial relationship between themselves and their fanbase to push the clothing line, and how how the fanbase has pushed back.

Both started on equal footing as young gamers playing horror games for the jumpscares. Markiplier’s fortunes exploded alongside the popularity of the blockbuster horror game Five Nights at Freddy’s; Jacksepticeye allied himself with the most famous (and infamous) gaming YouTuber on the net, PewDiePie and through this association and close friendship with Markiplier also grew. Both have since been listed on Forbes’ list of the world’s most influential gamers and made their 30 under 30 List.

Markiplier has long been on a level of incredibly, amazingly intense emotional involvement with his fanbase, whom he has let in on the intense highs and lows of his life. His brand is sincerity, from video’d mea culpas in which he cries over letting his audience down to vlogs shot from his hospital bed just before going in for surgery. Audiences have followed him through the adoption of his dog, Chica, and the crushing loss of one of his nieces in a car accident. In fact, he’s cried on camera so often that he’s mocked himself for it. Jacksepticeye, meanwhile, has been less publicly vulnerable while remaining emotionally accessible, and is something of a source of mischief and fun instead. He frequently uses the term “PMA” to rally his fanbase around him—short for Positive Mental Attitude, a believe-and-you-will-achieve rallying cry. This kind of bald-faced sincerity has been the men’s conduit to both personal success (both rake in millions thanks to their channels, sponsored videos, and other brand deals) and in raising millions for charity.

This, naturally, has resulted in two intense fanbases who believe that Markiplier and Jacksepticeye’s work has saved their lives, that both men truly care about them, and that they are “in this” together. But this time, it’s been different. Gushing reactions from fans—who seem to believe this is a long-held dream of Markiplier and Jacksepticeye’s, two men who have never expressed an interest in fashion in any of their many videos before the line’s launch—have been met with recrimination. At the time of writing this article, the highest-rated comment on Markiplier’s launch announcement video was critical, with over a thousand upvotes. Claims that CLOAK is “our brand” have been met by arguments from other fans who feel left out, bewildered or lied to.

They have fought this critique by claiming that criticism is fine with them—and continuing to mix intimate talk with promises that they’re really, truly sincere about everything they’re doing with the brand. Markiplier, for instance, has announced that they’ll divert their personal take of the money the company makes for at least a year or more. This is apparently a “gesture of sincerity.” Markiplier is selling this as an “adventure” that he and the fanbase are taking together. “CLOAK is our commitment to you,” Markiplier says, exemplifying the cheery bond-fostering speak that has permeated the launch like cheap commercial perfume. What does that mean? The fanbase doesn’t seem to know.

Jacksepticeye has also said CLOAK “(Is) not for every single person” while claiming he’s also “not done anything on YouTube EVER, just for the money.” Which begs the question: why have these men created this company, if not to make some sort of money from it?

If the line is priced well out of the range of the teenagers and college-aged people who mainly watch the jacksepticeye and markiplier channels, if CLOAK doesn’t have a public buy-in IPO, if the brand doesn’t state it’s benefiting any charitable causes, then how is it a “brand for the fans?” The only way it seems to be “for everyone” is that it’s committed to producing products in all sizes and using models who are plus-sized—but the initial launch line’s sizes ended at a 3X, once again shutting out thousands though they have stated plans to expand past that size.

Who is CLOAK for, then, if it’s both for everyone and not for every single person? Upper middle-class fans of either or both men who want social clout? Gamers who want an elite brand while wearing clothing that’s of no better quality than what they could buy at their local department store or at a trusted online shop? It’s a muddled message that’s been successful so far. Whether it will continue to be so, and if the twosome’s sincerity will avoid straining further credulity, remains up in the air.

Editor’s Note: An earlier version of this article attributed the term ‘PMA’ to Jackscepticeye, but it actually has roots in the punk scene and Napoleon Hill’s book Think and Grow Rich. We’ve updated the article to remove the attribution.