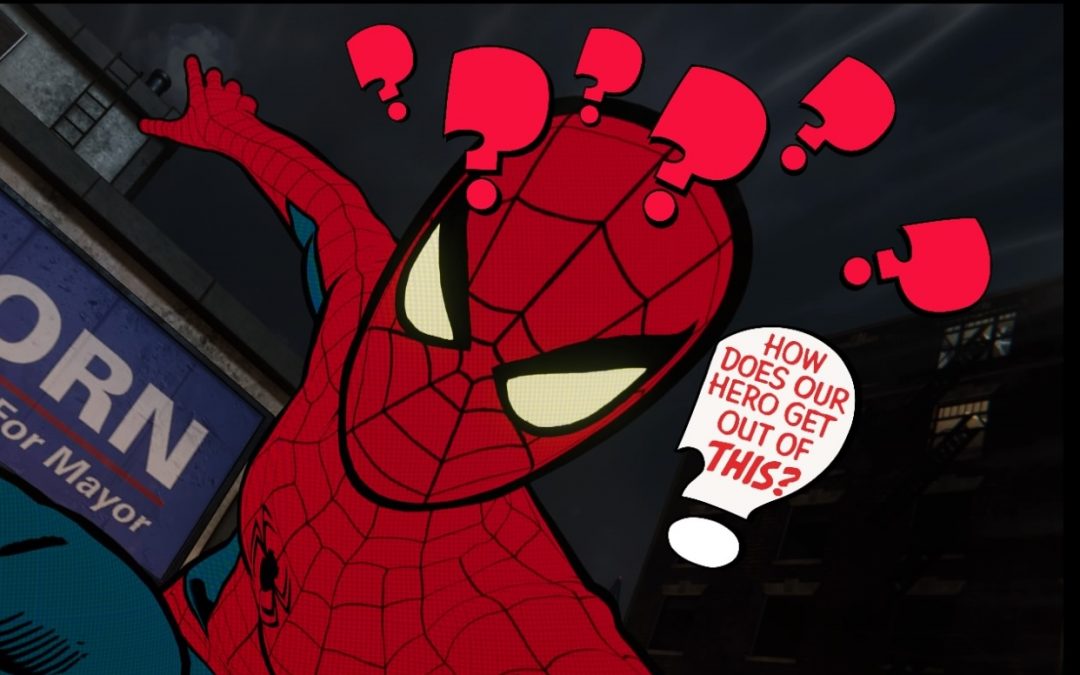 There was a little bit of a… thing back when the most recent Spider-Man game came about. Not a real backlash, just a bit of a kerfuffle, really, about how the game features Spider-Man assisting the NYPD in repairing a surveillance network that spanned the entire city. It’s the kind of thing that in real life would be pretty bad, but because this is a game, the system works perfectly and elegantly, only providing the locations of crimes in progress and not spying on the day-to-day lives of everyday citizens.

Sorry everyone but… Spider-Man's a cop

sad they made spider-man a cop

spider-man is a cop say it with me

That, combined with our friendly neighborhood hero’s frequent lapses into the playful identity of “Spider-Cop” while talking to Police Captain Yuri Watanabe, created an atmosphere that was, if anything, more akin to Brooklyn Nine-Nine than any kind of real, impactful exploration of what it means to assist the institution that is the police.

It’s a given, isn’t it? Spider-Man is a vigilante, but this is a superhero world, and as long as he’s more or less working on the side of the angels, he’s going to have a semi-friendly relationship with the police. There are certainly stories that explore what happens when they’re against him, but this game isn’t that. By and large, his dealings with the NYPD here are a footnote, something that is secondary to the fact that a man who runs a food bank doubles as an energy-wielding, zombie-creating mob king.

That attitude changes around the start of the second chapter of the City That Never Sleeps DLC, entitled Turf Wars. The DLC opens much like the main game did; Spider-Man arrives on the scene of a siege situation, where a mobster is holed up inside of a building and the police are trying to arrest him. The two situations play out very differently, however; in the start of the main game, that mobster is the Kingpin, and Spider-Man only goes in, on his own, after the police have made an attempt to bring him out peacefully. Spider-Man goes in to assist, to rescue; he’s focused on getting civilians out and ending threats to officers in danger. Spider-Cop has become a distinct entity within the Spider-Verse; separate even from his video-game counterpart, on the right of the panel.

In Turf Wars, however, when attempting to bring down lower-case-kingpin Hammerhead, Spider-Man arrives on the scene with the police, and is part of their entire plan to bust Hammerhead’s encampment open. He provides the ingress points, using webs to create ziplines so that a SWAT team can go in (with lethal force) and then sets about creating a distraction to draw as many mob goons to him in front of the building as he can, to make their attempt at infiltration more likely to succeed.

The problem, here, is twofold; first, the active inclusion of Spider-Man in the department’s planning is a tacit endorsement by that department of an unlicensed vigilante operating outside of the law. Heroes in comics have typically operated in a kind of grey area, legally; police organizations can’t really be seen officially endorsing them, but no one says no when the man in the rhinoceros armor is plowing through city blocks. Similarly, there’s a reason Batman and Gordon meet on rooftops at night, away from prying eyes. It’s also an endorsement by Spider-Man of lethal enforcement tactics; the character who bears the twin burdens of power and responsibility is saying, through his actions, that he endorses and indeed will actively aid a team of lethally trained SWAT officers in bunker busting.

The second part of that problem is what the tone of the game becomes. Spoiler alert: the mission goes horribly, horribly wrong. So do several more missions after that, until the tone throughout the Turf Wars DLC is clear; this is a city where the mobsters are literally at war with the police. It posits those same police, unquestioningly, as moral heroes standing against the unrelenting tide of villainy that is Hammerhead’s forces. Because it does this so unquestioningly, with Spider-Man’s tacit endorsement of their tactics, it comes off as unabashedly pro-police in a way that the primary game did not, and in a way that is blatantly dangerous for media to do in the modern age. As of this writing, 857 people in the U.S. have been killed by police in the year 2018. Of those 857, 369 were reported to be white people, which means that well over half (488) have been people of color, in a country where well over half of the overall population is white. It is a recorded and reported fact that police have disproportionately targeted people of color over white people, and that of those they have overwhelmingly targeted Black people. The police rarely face any kind of consequences for this; even on the occasion that an officer will lose a job over it, they will often just get a new job doing the same thing—sometimes elsewhere, sometimes back in the same department.

Police officers often paint themselves as a kind of last line of defense; oftentimes they believe, and would have you believe, that they are all that stands between your safe, comfortable life and a world of unrelenting crime and chaos. There is a term for this concept: the Thin Blue Line. When the Black Lives Matter movement began, a movement specifically about the murder of Black people by police officers, that movement’s more virulently racist detractors formed a counter-movement of their own. Blue Lives Matter purported the idea that officers face even more danger, and are thus more deserving of protection.

The Thin Blue Line is such a prevalent idea that it has its own emblem. A company known as Blue Line Productions, Inc., has been selling products to certified police officers in the U.S. since 1993, and since the dawn of the Black Lives Matter movement (and its Blue Lives Matter counterpart) a new design has come to prominence. That design, a black-and-white rendition of the American flag with a single blue line in place of one of the white ones, visually puts that blue line in front of the flag; iconography depicting the police as defending the United States of America, even as those same police disproportionately attack and harass the country’s marginalized communities. The fact of the matter remains that, even on its best days, the institution of the police is an institution of power, and that power is unevenly applied. It disproportionately targets marginalized communities, the kinds of individuals that comic book heroes were created to protect. Superman got his start taking down tyrannical landlords to protect the poor. Spider-Man himself learned a lesson about the preciousness of life when his own uncle was murdered by a man he could’ve stopped. When police departments deploy SWAT teams, when they murder civilians without due process, these are choices that people make. These events are not accidents, they’re not up to the whims of fate. Officers enter a situation with lethal force on the table, on the mind. For all that the institution and fictional costumed heroes operate on marginally the same side of the law, there is a significant moral and philosophical difference between “stopping the bad guys” and saving those in need. For such a character as Spider-Man to endorse, by both word and deed, the actions of an institution that has a real-life, historical record of injustice and murder, is a grave disservice to that character’s own history, to his creators, and to the very idea of heroism.