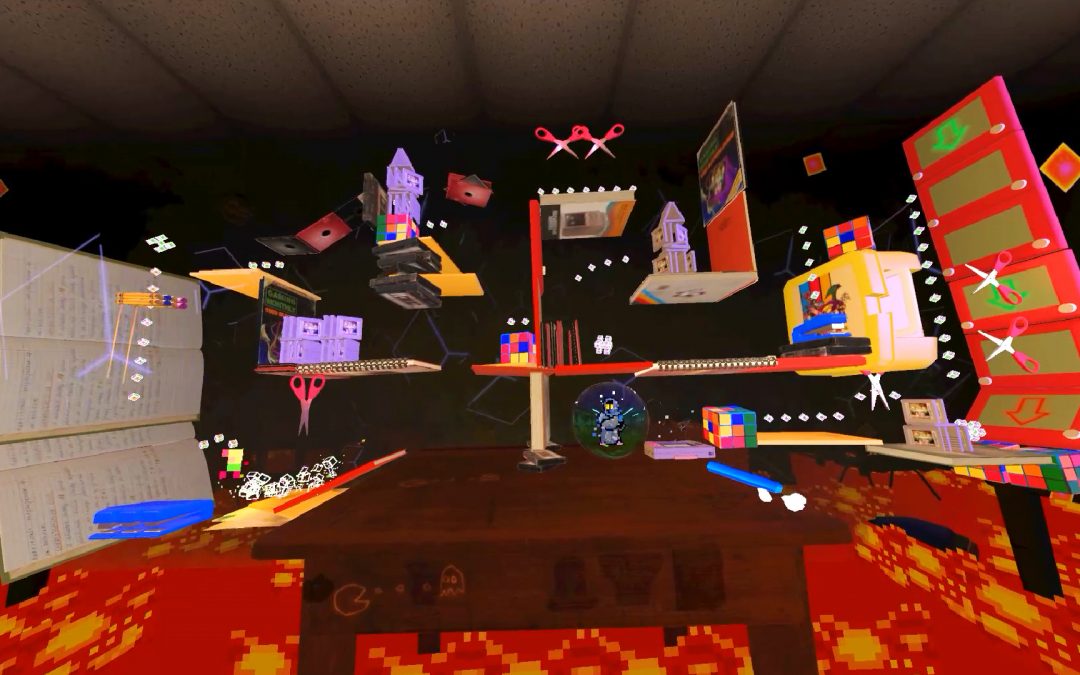 My first gaming console was a Game Boy Color my mother received in exchange for some nursing books when I was about eight years old. It was bundled with Super Mario Land and Donkey Kong, though I never managed to get very far in either. I was terrible at sidescrollers and platformers and lacked the patience needed to keep going each time I died. Over the years as I’ve traded up to different consoles and games graphics and mechanics have improved, I’ve avoided sidescrollers and platformers like the Castlevania series, convinced that I simply wasn’t good at them.

Sidequest was provided with a copy of Pixel Ripped 1989 for PlayStation VR in exchange for a fair and honest review. I really can’t speak as to what compelled me to play Pixel Ripped 1989 by ARVORE Immersive Games, a platformer, a side-scroller, and a VR game all rolled up into one surprisingly fun bundle. Maybe it was the cool 80s aesthetic of the cover art, or the fact that the two main characters are both female, but I’ve never been so happy to break my “no side-scrollers or platformers” rule.

Pixel Ripped 1989 follows the adventures of Dot, a character in a cyber game world played by the player character (stay with me). Dot is an adventurer who is trying to stop the Cyblin Lord (Cyber Goblin, get it?) from destroying both her video game world and the real world, which the Cyblin Lord has the ability to invade and attack at will by ripping through the fabric of reality.

Pixel Ripped 1989 is a game about a game within a game, set in the 80s, and so much of what makes it great is the novelty of the mechanics employed.

In the first level, players take control of a second-grade girl named Nicola as she’s asked to guide Dot to her destination within the game world of her handheld console. However, Nicola isn’t supposed to be playing video games in class, and part of the challenge of completing the task involves using your VR headset to launch spitball wads at different targets around the classroom in an effort to distract the teacher so she won’t catch you. You have to do this while you’re trying to guide Dot through a low-pixel landscape on the handheld console that you control with your PS4 controller. Needless to say, managing these two wildly different aspects of gameplay becomes a little hectic sometimes, and you have to be able to multitask.

Once Dot reaches her destination in the handheld game, the Cyblin Wizard explodes into the human world and rains havoc down on its unsuspecting citizens. This leads to a VR boss fight, such as shooting down malevolent birds before they manage to kidnap your classmates. The classroom portion of the game was especially difficult for me, given that I haven’t played a sidescroller in years and lack the reflexes needed to get through it without dying several times. Having to split my attention in order to distract the teacher while I played the sidescroller just made everything that much harder, but somehow a lot more fun. Rather than feeling discouraged and quitting the game after a few tries, my need to help Dot, the novelty of the game mechanics, and my burning need to see what the boss fights would be like drove me to keep going. The inclusion of women as the protagonists also played a part in how determined I was to make it through the game. Although Pixel Ripped 1989 banks on the nostalgia of an era from which female gamers are often erased entirely, it pulls those women back into the light through Nicola and makes women the heroes of the story.

The game is designed to immerse you in a reimagining of the 1980s, with the synthetic music, wood paneling, and trippy neon aesthetic to match. The sidescroller portion of the game is clearly an homage to a time before 3D graphics were so widely used, while the juxtaposition of the 3D graphics and VR effects against the pixelated sidescroller are a great way of showing how far we’ve come since. The end product feels like it came less from someone hopelessly stuck in the nostalgia of the 1980s and more like the team remembers the good of the 80s, while acknowledging where improvements have been made and should be made still. Pixel Ripped 1989 somehow hit me right in the nostalgia for an era that I wasn’t even alive to see, and gave me a newfound appreciation for both the sidescroller and VR mediums, even after my apprehension at trying out a game that employs both together. It’s is an excellent example of the ways VR can be used to enhance a gameplay experience, and how it’s possible to create an homage to a time period that still manages to improve on it.

Fun fact: I finally went out and tried playing a Castlevania game after I was finished with this game, and loved it.

Pixel Ripped 1989 is available now on Steam and the PSN Store.