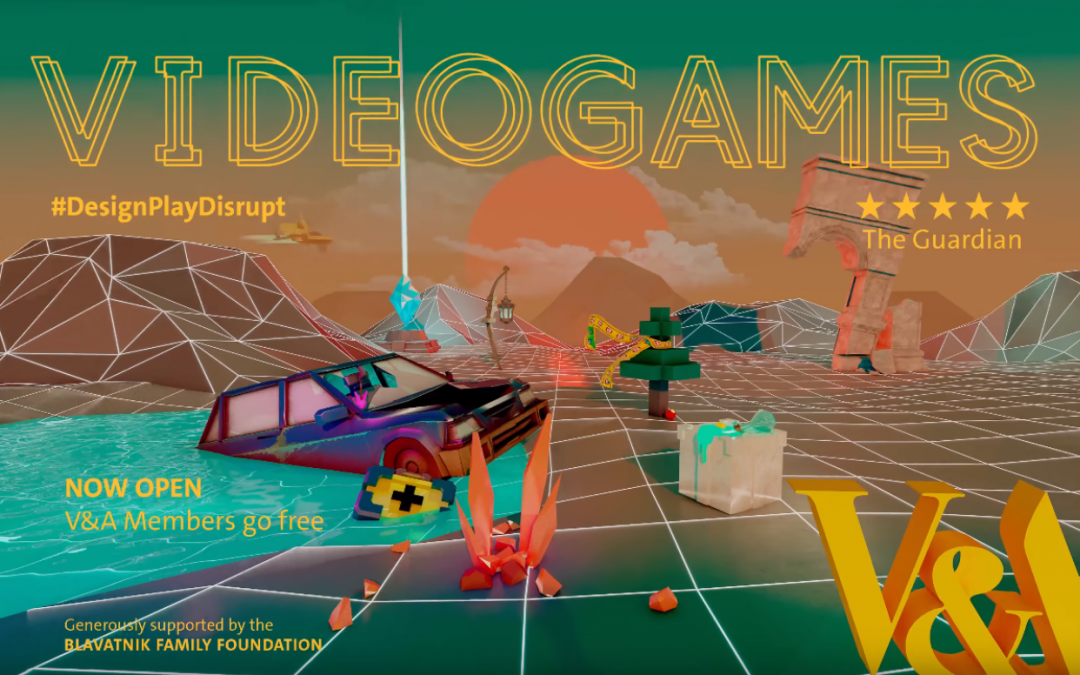 The Design/Play/Disrupt exhibition opened recently at the V&A museum in London and runs until 24 February 2019. It aims to examine the design process involved in games “alongside immersive installations and interactives.” A giant, illuminated display at the entrance begins with the phrase: “Videogames are everywhere.” However, though playing video games has become increasingly popular as a pastime, there are still misconceptions that they are purely for entertainment. The Last of Us sketches and footage

There’s nothing wrong with this idea, but it often comes with the assertion that video games shouldn’t be political, and should only be “fun,” usually followed by a popular example like Call Of Duty or Grand Theft Auto (ironically, games rife with politics).

So, it was refreshing to attend an exhibition that not only recognised the way we can interact with video games in everyday life as positive and often inherently political, but also treated them as a revolution in design.

I was excited to see the exhibition with my husband, Ben; while video games are indeed everywhere, this was the first time I’d seen an event curating the design implications and opportunities within them. In the first area, we were treated to behind-the-scenes insights into the production of games such as Journey, The Last of Us, Bloodborne, and Splatoon. Though this was of more practical use to Ben than it was to me (his job involves game design and education), I was still fascinated thanks to the sheer amount of detail.

The massive storyboard for The Last of Us was plastered across one large wall, allowing me to see the major plot points clearly laid out on handwritten cards. For most of the games, display cases held journals containing scrawled notes and sketches, the latter demonstrating the evolution of character designs. Journey is a beautiful game, for example, and seeing how it started on pages and post-its gave a real sense of the immense amount of change, iteration, and hard work that went into creating the final game.

Even more interesting were the displays that detailed the mechanics behind the games. On a large monitor, footage from a Bloodborne fight played out above three smaller monitors. One showed a view of the hands of Matt Lees (YouTuber and critic) using a controller to battle the Cleric Beast. Another displayed his previous failed attempts. The middle screen displayed his commentary, pulling apart how Bloodborne encourages the player to make mistakes through reckless actions. As someone who can barely play platformers without accidentally killing my character over and over, I breathed a sigh of relief that I had never really got into Bloodborne.

Past the more well-known titles, several smartphones encased in colourful silicone cases hung from the ceiling on bright yellow cords. They contained two prototype mini-games by Jenny Jiao Hsia: Wobble Yoga and Food Tetris. Each highlighted Hsia’s issues with body image. Playing them was a strange experience; watching the calculation involved in precisely measuring calories juxtaposed with cute gameplay underscored the disconcerting fixation many place upon their diet and weight. It was a profoundly uncomfortable experience, and a perfect example of what else games are capable of. The exhibition also focused on how video games could be narrative experiences, such as Kentucky Route Zero, with its influences from experimental film and brutalist architecture, or The Graveyard, which has been described as more like an “explorable painting” than a traditional video game.

A key section of the exhibition was the Disruptors area. On a large screen, people involved in designing, creating, critiquing or writing about video games (such as Rami Ismail, Tanya De Pass, Chella Ramanan, and Nina Freeman) discussed the inherent cultural issues in the industry. For example, the lack of diversity and representation regarding the race of protagonist characters was highlighted, as well as how this only perpetuates the stereotype that video games are just for white men. While this may not be a revelation for those who are familiar with institutionalised racism, it was still important to detail this and recognise that video games are always political in some way, whether those with privilege realise it or not.

Thankfully, the exhibition didn’t generally shy away from the toxicity and discrimination within video game culture. Dotted amongst some playable games were cases filled with tweets sent out with the #1reasonwhy hashtag that highlighted sexism within the videogame industry. Another focused on the lack of racial diversity and representation in video games. A monitor showed clips from Anita Sarkeesian’s Tropes Vs Women in Video Games series, while a text below detailed the GamerGate harassment campaign.

The playable games served to highlight the way that video games can be used as ways to explore who we are and how we are affected by the world, such as Robert Yang’s Rinse and Repeat, or Ninja Freeman’s How Do You Do It? Another game, A Series of Gunshots, focused on the everyday horror of gun violence. The player has to press a key; a flash of light illuminates the interior of a greyed out scene of a house or car, accompanied by the sound of a gunshot, before the scene fades out. It’s a simple device, yet a distressing one, as the player must imagine a life destroyed through one small, thoughtless action. The contrast with games that liberally encourage “shooting the bad guys” is striking and lingers long after.

The last major area was a riot of sound and colour, aiming to encourage people to think differently about how they could play video games. The Alt Ctrl developer scene, which involves using alternative ways of interacting with games, was well-represented. Hit Me! employs hardhat controllers, cameras, and buttons to get players to challenge each other physically. There was a mini-arcade game that could be carried around and placed in a backpack. Another, Line Wobbler, demonstrated that a dungeon crawler game could be created out of a door-stopper spring and an LED strip display. I tried the latter and was fascinated by the different approach the designer, Robin Baumgarten, had taken. 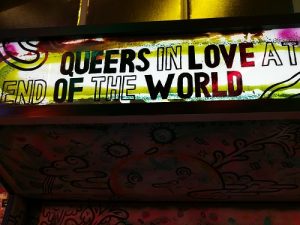 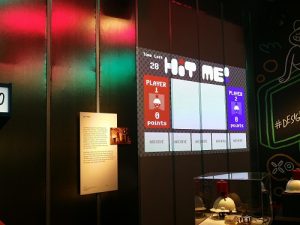 Hit Me! by Kaho Abe 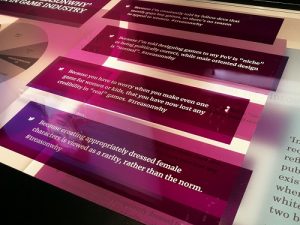 It was a fantastic way to end the exhibition. Having started with an examination of how games are designed, Design/Play/Disrupt slowly but surely challenges the viewer to leave aside what they expect video games to be. It asks us what video games are currently failing to do, but also asks how they can get better, and how they can expand beyond the limitations of what we assume video games can be. The exhibition runs for a couple more months, so make sure to experience it for yourself. I strongly recommend it if, like me, you want to focus on the possibilities of what video games can become.