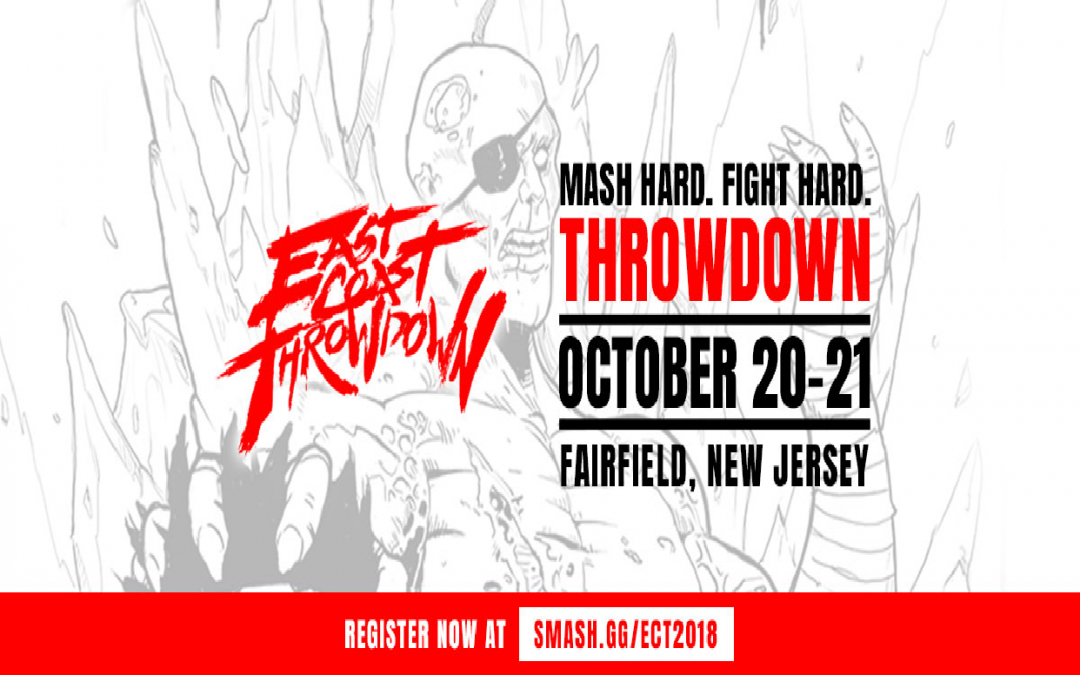 This past weekend, fighting game players from around the world converged on New Jersey for East Coast Throwdown 2018. Besides being an official Ranking Event for Capcom’s Street Fighter V Pro Tour, the tournament also highlighted Dominique “SonicFox” McLean’s continued dominance across multiple fighting games in addition to being the first real tournament for Bandai Namco’s newly-released Soulcalibur VI.

Taking place at the Crowne Plaza in Fairfield, New Jersey, ECT feels unlike a lot of other major fighting game tournaments. It’s not in the big metropolis of New York, but it still draws crowds from around the country. For every pro that doesn’t make it out to ECT, you’ll find two newcomers in their place, looking to make their own mark on the scene.

Going into the Street Fighter V tournament, most eyes were on Du “NuckleDu” Dang and Derek “iDom” Ruffin; both have come off from some high-placing finishes in recent tournaments, with the two placing 1st and 2nd, respectively, in the North American East Online Event for SFV at the start of October. As an official Ranking Event for the Capcom Pro Tour, players competing in the ECT earned ranking points to help guarantee them a spot at the Capcom-sponsored Street Fighter V tournament, the Capcom Cup, in December. NuckleDu and iDom met each other in the Winners Finals of the tournament after never dropping a set against another opponent. Their styles couldn’t be more different. While NuckleDu mostly used his signature Guile throughout the tournament, harassing opponents with slow-moving Sonic Boom projectiles and controlling space with long-range normal attacks, iDom utilized the extremely-tricky throw character Laura, who can put players in a world of hurt with just a few quick mixups.

As it was a double elimination tournament, NuckleDu was not out at that point, and fought valiantly against Karin master and EVO Finalist Victor “Punk” Woodley to score the runback against iDom in the Grand Finals.

NuckleDu, fresh from his win against Punk in Losers Finals, made a small adjustment to his game: instead of pushing forward into Laura’s defense, he held back to let iDom hang himself. The simple change clearly left iDom frustrated as he fell victim to NuckleDu confident use of Sonic Booms and static Sonic Blade traps. NuckleDu got the 3-0 back on iDom to force the match reset and bring him down into the losers bracket with him. And there it was. The last best-of-5 set to determine the winner of the whole tournament. Unable to shake off NuckleDu’s renewed font of energy, iDom was only able to take one game, thus securing NuckleDu the first place finish.

This SFV tournament wasn’t just significant for the entertaining play, but also because it was the last tournament before SFV’s latest balance patch, which significantly reduces the game’s infamous input latency. Since the game’s release, it’s gotten criticism for being too guess-heavy and not rewarding of careful play and reactions. When it takes longer for your character to act after you press a button, it means that even if you are discerning and have the correct reaction to an opponent’s move, it’s possible you will still lose out in that situation on account of the game’s innate input lag. From here on out, folks can expect SFV to better reward players with good reactions and to increase the skill-ceiling of the game at the highest levels of play.

It wasn’t a big weekend for only Capcom fighters, as Namco Bandai had 2 heavy-hitting competitions on display in DragonBall FighterZ and Soulcalibur VI. Fighting game prodigy and Black queer furry SonicFox has had a long history with DragonBall FighterZ and helped shape one of the community’s most storied rivalries with Japanese competitor Goichi “GO1” Kishida. Even without his signature rival at the tournament, SonicFox still faced stiff competition from players like teammate Jon “dekillsage” Coello and Piccolo-specialist Eduardo “HookGangGod” Deno.

Perhaps the most signature part of SonicFox’s DBFZ play, besides the GO1 rivalry, is his willingness to continually change his team makeup, especially before major competitions. Since DBFZ is a 3 vs 3 team game, it can completely change your strategy if you use one character over another. SonicFox has a long history of adopting characters that other players have put a ton of time and effort into researching for new techniques. Because of DBFZ’s large character roster and nature as a team game with a ton of variables bouncing off of each other, it’s had a lengthy “discovery period.” This is where players are constantly able to find new ways to utilize characters and their moves to develop new strategies. Interestingly enough for ECT 2018, SonicFox went back to a character he initially cut his teeth on, the purple pugilist, Hit, who is generally considered one of the less-dominant characters in DBFZ’s roster.

Watching SonicFox’s play this weekend, however, you’d be hard pressed to echo that sentiment. With his Android 16/Bardock/Hit team, Fox crushed HookGangGod in the Winners Finals 3-1. Deno still showed major signs of life as he answered back at Fox’s teammate dekillsage in the Losers Finals with a 3-0 himself. Hoping to repeat what NuckleDu accomplished from the losers bracket in SFV, HookGangGod met Fox again in the Grand Finals. Unfortunately for him, it was not meant to be. SonicFox dismantled Deno in a 3-0 fashion to take the title.

Not content to win just one of the big games that weekend, Fox also set his sights on the first major Soulcalibur VI tournament since the game’s release last week. A soft reboot of the series, SCVI has taken the meter-focused systems of SCV and gone even further with them; alongside some quality-of-life improvements and new mechanics like Reversal Edge, SCVI has solidified itself as the most beginner-friendly entry in the series and drawn out a ton of new blood for competition. SonicFox is no stranger to learning new games, and in SCVI’s boisterous and sword-raining final boss Azwel, he has found the perfect character to match his style of play.

Tearing through the winners bracket, McLean only dropped a sparse few games on his way to Winners Finals. What stood before him, however, was Soulcalibur veteran Nathan “Linkorz” Mandell. Utilizing the massive sword wielding series protagonist Siegfried, Linkorz deftly handed SonicFox a 3-0 through his superior use of stage positioning and the new Soul Charge mechanic. It’s clear SonicFox was still hungry as he battled his way through the losers bracket to again face Linkorz in the Grand Finals. While McLean got some good licks in on his opponent, it’s clear that Mandell was still the one in control. Up 2 games and on tournament point, Linkorz performed a beautiful wall combo into a final throw mixup, scoring him a perfect round that commentator Bryant “KitanaPrime” Benzing described as, “the exclamation point [on the end of SonicFox’s sentence].”

It’s clear that SCVI has a bright competitive future ahead and we can only speculate how SonicFox will adjust from this point on. Until that time, Linkorz did the series proud through his superb Siegfried play and can feel content at being crowned the first major SCVI tournament winner.

East Coast Throwdown has always been a curious tournament that has a range of new and old games, fresh competitors and fighting game veterans. This year’s competition was no different. It’s clear from community’s enthusiasm that they wouldn’t want to have it any other way.