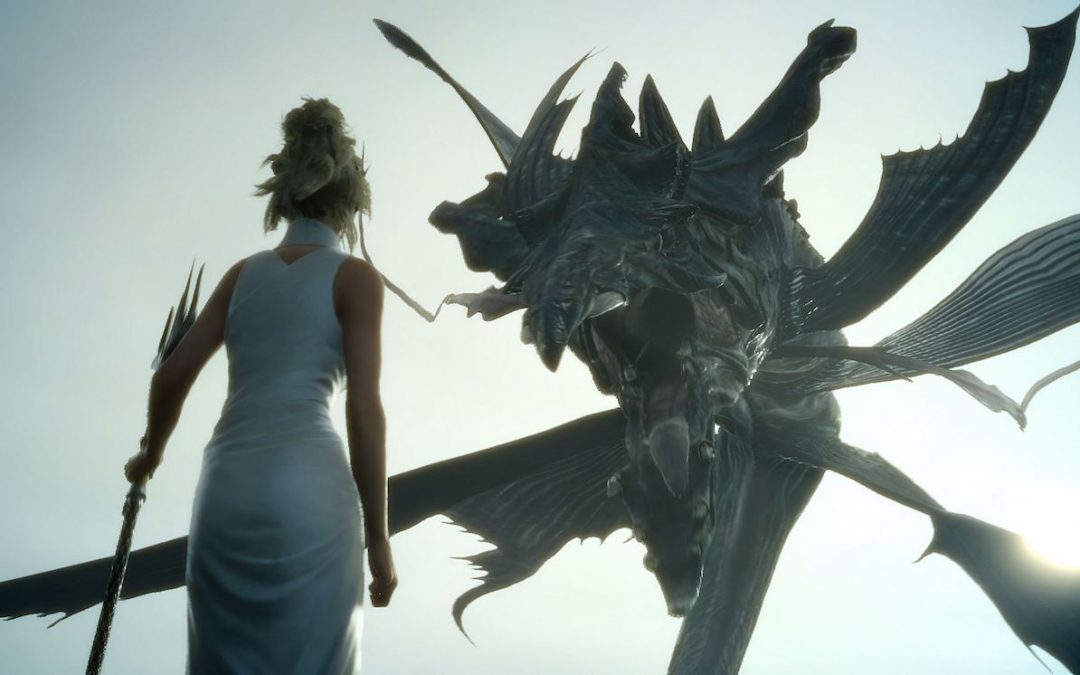 The premise of the game is that you, as Prince Noctis (the future ruler of Lucis), are travelling on what becomes probably the world’s worst road trip with your guardians and friends, Ignis, Gladiolus, and Prompto. Noctis is betrothed to Lady Lunafreya Nox Fleuret, his childhood friend and an Oracle who communes with the six divine astrals. The marriage is a political unification of Lucis and Lunafreya’s home country Tenebrae against the militaristic empire of Niflheim. Not only are they trying to protect the few kingdoms outside of Empire control, but Noctis bears the additional burden of having to protect the Crystal, which allows members of the royal Lucis Caelum line to wield powerful magic.

Players start out driving across the country to reunite with (and marry) Lady Lunafreya in the beautiful city of Altissia, only to be met with literal and figurative roadblocks. Then Noctis’s father, King Regis, is killed while signing a treaty with Niflheim in an attack that also destroys their home city of Insomnia. Lunafreya, who was there to sign the treaty on behalf of Tenebrae, is also presumed dead, though players later discover she survived the attack. Final Fantasy XV maintains a somewhat linear structure until this point, giving players a limited number of hunts and sidequests to complete. The world opens up significantly after Regis is killed, giving an impressive amount of space to explore. It’s also where the story starts to fail one of its best characters: Lunafreya.

It doesn’t really matter where Noctis goes, so long as the player retrieves the ancient royal weapons that will allow him to awaken the Crystal’s power. As part of his journey, Noctis must gain the Astrals’ (FFXV’s version of summons) blessings, meaning the party must still head to Altissia and curry favor with Leviathan even once the wedding is off. Beyond the threat of Niflheim domination, the planet is becoming infected with Starscourge, a plague upon the sun that is plunging the world into unending darkness and allow it to become overrun with daemons. Without the Astrals’ blessings, Noctis can’t use the Crystal’s power to stop the Starscourge.

It’s a daunting task, only possible because Noctis has Lunafreya at his back. In the cutscenes that bookend each of the game’s fifteen chapters, players earn backstory: Lunafreya, four years Noctis’s senior, is his sole confidant during childhood and teaches him about the Crystal and his royal lineage. Despite living as a captive of the Niflheim empire, at sixteen Lunafreya becomes the youngest Oracle in history and uses her powers to travel Eos, healing those affected by Starscourge.

Though Noctis is the prophesied King of Light, it is Lunafreya who stands in brilliant counterpoint to the game’s darkness and daemons.

In true Final Fantasy fashion, the plot of XV grows heavy as things become more dire: the Starscourge means days get noticeably shorter in the game, and the daemons become stronger and more frequent as players progress. It grows more and more difficult to gain the blessing of the Astrals, and the increased Niflheim military presence guarantees destruction and difficult battles wherever players travel.

Though Noctis is the prophesied King of Light, it is Lunafreya who stands in brilliant counterpoint to the game’s darkness and daemons, often literally, as her fair hair and white clothing stand in stark contrast to the drab, dark colors of the landscape and clothing worn by other characters. As Oracle and one of the few remaining members of the Tenebrean royal family, Luna is constantly under threat from the Niflheim empire. Rather than running, though, she uses her power to help assuage the fears of the Tenebrean and Lucian people and heal those affected by the Starscourge. Her magic mitigates the effects of the Starscourge, at the cost of her own vitality.

In Altissia, Noctis learns that Lunafreya survived the attack that killed his father. She is gravely weakened, having used her magic and, by extension, her own life force to save others. Even so, she is determined to help Noctis gain Leviathan’s blessing, doing so at the cost of her own life. Luna’s magic and compassion is the only reason the population hasn’t been decimated by the Starscourge and the world hasn’t become shrouded in unending night. It is only with Lunafreya’s guidance and life sacrifice that Noctis is able to awaken the Crystal’s power, defeat Niflheim, and restore light to the world, though he, too, dies in the process. While reviewers generally gave Final Fantasy XV positive ratings, one common complaint was that second half of the game felt rushed. I finished the game at about ninety-six hours, and while I am perhaps excessively explorative in my gameplay, I still only completed a fraction of the hunts and quests available. Of those hours, I completed the second half of the game in under ten, meaning I wasted approximately seventy-five hours hunting and romping around the countryside with my pals.

Because of this, Lunafreya’s death and Noctis and Luna’s subsequent afterlife reunion had a significantly lessened impact on me. I found that Final Fantasy XV constantly rewarded my exploration with new weapons, archive data, and new recipes for Ignis to cook at camp. There are so many things Final Fantasy XV does well; fun combat, lush world design, and callbacks to other Final Fantasy games are just a few examples. However, its open world structure negated any sort of urgency a player might feel to travel to Altissia and begin the second half of the game.

Lunafreya’s powerful magic and ability to commune with the gods lend stunning visuals to some of the most memorable cutscenes in the game, but my biggest problem is that that’s all they provide. Whereas interactions between your party members vary and emphasize Ignis, Gladio, and Prompto’s characterization and chemistry, Lunafreya is relegated to a few cutscenes that, in total, make up an hour or two of a 100-hour-plus game.

Whereas interactions between your party members vary and emphasize Ignis, Gladio, and Prompto’s characterization and chemistry, Lunafreya is relegated to a few cutscenes that, in total, make up an hour or two of a 100-hour-plus game.

Each of Lunafreya’s onscreen moments emphasizes her kindness, compassion, and determination. She is a skilled magic user and diplomat. She’s also one of the few people who treats Noctis as a friend and equal, and it’s because she is an equal. Her power and presence are just as strong as those of Noctis, but her inclusion often feels hollow. Despite being the catalyst for Noctis’s eventual ascension as the King off Light, the structure of Final Fantasy XV downplays Lunafreya’s importance. More than anything, her appearance in cutscenes is a reminder that yes, there is an overarching story occurring even as players waste time hunting dualhorns, coeurls, and daemons.

While many of the game’s issues have been resolved in patches and downloadable content has added hours of background for Ignis, Prompto, and Gladio, Lunafreya remains critically underdeveloped. This may change with upcoming DLC, but with so much of the world open to exploration, the inaccessibility of such a pivotal character is a narrative weak spot.

The endgame funnel becomes exponentially more bleak in a matter of minutes, culminating in two of the game’s nastier boss fights. If players can make it to the other side of those fights (pun absolutely intended), Noctis and Lunafreya finally get their long-awaited wedding. Objectively, it’s a beautiful wedding, but it would have been so much more gratifying if Lunafreya’s character arc was treated with the urgency and gravitas it deserved.