Making the Cut: The Tidus Laughing Scene Is Good, Actually 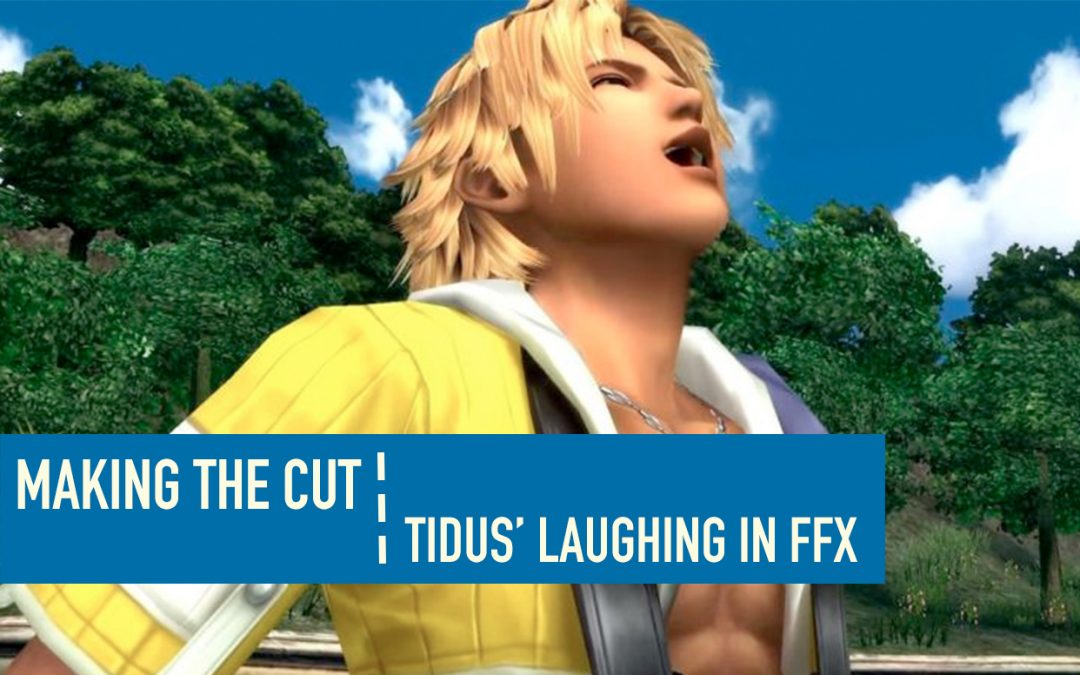 Making the Cut is a recurring series in which we defend the notoriously bad things we love about video games. Wonky mechanics, goofy cutscenes, poor characterization—we love it all, and we’re going to tell you why.

In isolation, the scene is silly. Tidus barks out a truly heinous laugh, and Yuna’s stilted voice acting—likely recorded to match the original Japanese mouth animations—robs her dialog of gravity. The laughter is pained, forced, like Tidus is screaming, “Ha! Ha! Ha!” rather than actually laughing. Even Yuna comments on it, saying, “You probably shouldn’t laugh anymore,” shortly before the two break into actual laughter.

Devoid of context, this is a scene where a goober and his love interest make one another laugh for some unknown reason. Maybe they’re having a bad day. Maybe one of their party members just got eaten by a chocobo. Whatever. But there’s one key line you need to pay attention to here: the one where Yuna says, “I want my journey to be full of laughter.”

Because what those who haven’t played the game might be missing here is that Yuna’s journey isn’t an uplifting, good-timey adventure in search of treasure (that’s the second game—well, mostly). In the world of Final Fantasy X, summoners like Yuna travel to defeat Sin, a giant monster. Tidus, a newcomer to this world after Sin destroyed his own homeland of Zanarkand, joins up with Yuna’s Guardian party as they escort her on her journey to find the Final Aeon that will defeat Sin.

At least, that’s what Yuna’s party thinks. Just before the infamous laughing scene, Tidus experiences one of two major bombshells that shake his perception of his journey—in this case, that the giant sea monster that destroyed Zanarkand, the one that Yuna is on a mission to destroy so that Spira can enjoy another period of Calm, is actually his father, Jecht. Jecht became Braska’s Final Aeon on a previous mission to defeat Sin, turning him into the new monster.

Tidus’ relationship with his father has been tumultuous to this point. He calls him ‘my old man’ with a scathing tone, and flashback cutscenes paint him as a distant, absent father. But after seeing the destruction Sin has wreaked across Zanarkand and Spira, Tidus has to grapple with a new complicated view of his father: the one where he’s a giant city-destroying monster.

That revelation is the one that directly precedes the laughing scene. Yuna, in an attempt to cheer Tidus up after he finds out that his father is, if not gone forever, now a giant whale-like monster that will destroy the world if they don’t get a move on and kill him, convinces him that forcing himself to laugh is the cure. It’s heartbreaking, especially when you consider that’s only half the story.

Because Yuna has her own reasons to force laughter. As she and Tidus grow closer, she’s grappling with the fact that she’s keeping a secret from him. Tidus, a newcomer to Spira, doesn’t know that to be a Summoner is to be a martyr. Summoners don’t survive the final battle with Sin; they universally die in the battle, their sacrifice bringing about another period of Calm. Yuna is coaching him through this moment of sadness because it’s something she’s been dealing with since she undertook the mission of becoming a Summoner.

So when Yuna says, “I want my journey to be full of laughter,” she’s not saying, “Sometimes things are sad, but let’s look on the bright side!” She’s saying, indirectly, “These are my last moments in Spira; let’s spend them living.”

Of course, neither Tidus nor the viewer know this at the time of the scene. Tidus and Yuna’s forced laughter, while the other, more adult, protagonists look on, is a scene of pure silliness, a reprieve from the knowledge that Jecht has become Sin. But with repeated views, knowing the context, it’s tragic. Auron, Wakka, and Lulu’s stoic gazes aren’t just awkward, they’re sad. They know what’s coming, and they don’t interfere or make fun of them because both Tidus and Yuna need this moment of levity in their journey.

I might have laughed the first time I saw this scene. I might have laughed the second time, when I saw it years later and didn’t remember the context. But after replaying Final Fantasy X, I’m sorry, I can’t laugh anymore. My heart is broken. Please stop laughing at my precious, doomed children and their eternal love. I know Tidus sucks, but let him have this moment, I’m begging you.