The Piano: A Review Of Sorts 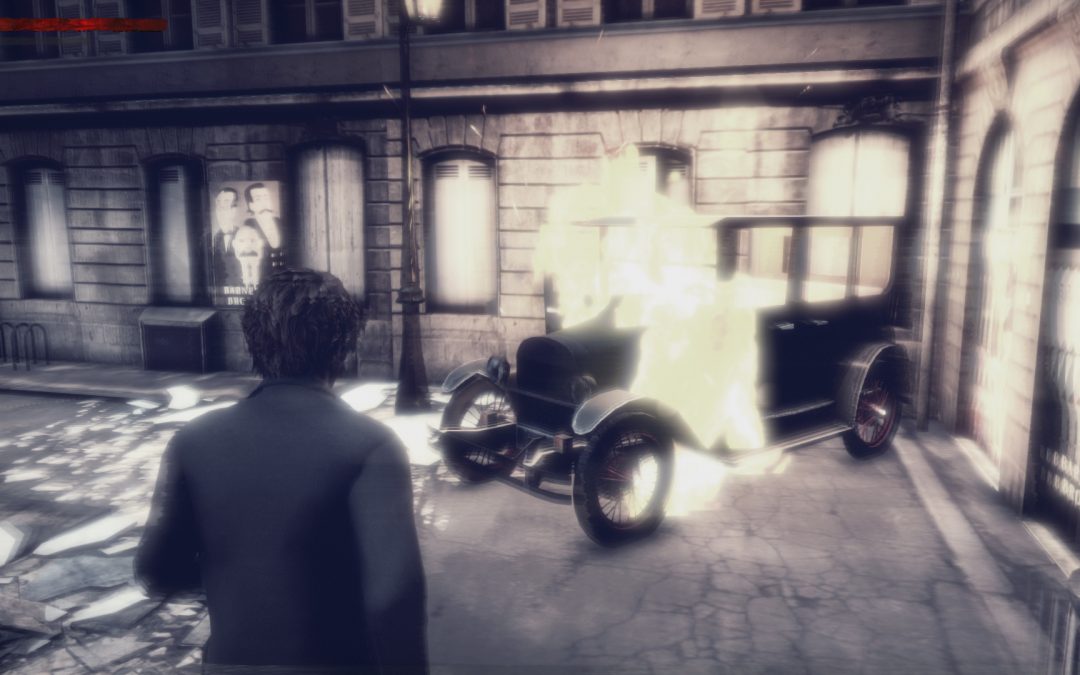 Note: Sidequest was provided with a copy of The Piano for PC in exchange for a fair and honest review.

The Piano, an adventure/survival horror indie game by one-man studio Mistaken Visions, could be great—but chances are I’ll never know. The game is set in the 1940s in Paris, France. You follow around the character of John Barnerway, a failed pianist whose far more successful brothers have all died within the same week through mysterious means. John is the prime suspect, and as such is determined to figure out what the hell happened, partly because he doesn’t know, and partly because there are things he can’t remember.

As the story progresses, you can find memories and recordings that provide more background to John’s life and upbringing (his dad doesn’t seem like a stellar dude), as well as track down clues through newspaper clippings that give some context as to what might have happened to his three brothers. It becomes glaringly obvious that John is mentally ill as you travel through hazy worlds full of dark shadowy shapes, and a reveal early in the story makes clear that what we’re exploring isn’t the real world, but rather John’s mental construction.

Gameplay consists of navigating environments to find clues, recordings, memories, and other objects that can help you put together the events of the story and progress further through the game. The environments are eerie depictions of real-world places that John has been to, with shadows of people walking about (though you can still bump into them), and sinister creatures that you must avoid while striding through the streets and paths. It’s not so much a stealth game as it is an exploration game with some stealth-like elements. At no point did I feel the harrowing anxiety I get any time I play a stealth game (I’m really terrible at them). There’s some mild puzzle solving in the form of combining inventory items and putting together clues you find in the environment, similar to a point-and-click adventure, which I breezed through just fine. The ambiance was spooky in a dreamlike, hazy way I enjoyed, though not harrowing in the traditional horror game sense. Considering that this was apparently primarily a one-person endeavor, the environments are surprisingly well-rendered, though the main character design retains that plastic, dead-eyed look that’s found in 3D-modeled games now and then. The developer promises a lack of jump scares, which should be encouraging to players like me who have a hard time with such elements.

For some of the cutscenes, the art style changes drastically into something a bit more vintage and cartoony. This can feel a little jarring, since the majority of the game is realistically rendered, and I didn’t think the style suited the narrative. It’s possible that the sudden stylistic change was meant to be a way to demonstrate that the narrator’s recollection of events is skewed since the style was used to depict quick flashbacks to things that happened before the game began. The soundtrack adds a wonderful, melancholic tone to the overall game, and it consists almost entirely of ambling piano instrumentals in keeping with the theme. Of the entire game, the soundtrack is perhaps my favorite part.

I found the story intriguing, the environments captivating, and the element of exploration engrossing, but in spite of everything going for it, I still couldn’t finish the game. As soon as I booted up The Piano, I immediately ran into issues attempting to control the main character and camera. The default mouse sensitivity is infuriating, and I was more or less having to rapidly pick up and slide my mouse in short, quick bursts just to get the camera to rotate 90 degrees quickly so I could see where I was going. I thought initially maybe it was just my mouse, but after attempting to play with two other mice I had on hand and a controller (the game didn’t even bother trying to play with the controller), I still couldn’t navigate well enough to keep from running directly into the very creatures I’m supposed to avoid.

In the end, I had to go into settings and raise the mouse sensitivity to its maximum before the game became a little more playable, though it remained frustrating. The camera is slippery, and it felt like one wrong flick of the wrist would cause me to lose sight of some pretty important parts of the game, like the aforementioned monsters. This caused me to get caught several times by the prowling creatures, but don’t worry, they’re ridiculously easy to outrun as long as you’re repeatedly consuming the syringes of “Laudanum” that can be found throughout the game to raise your “sanity” while you do so.

I only died once, and it was entirely because a monster snuck up on me while I struggled with the camera and maneuvering the character. There’s a lack of maps in some key areas of the game, which led to me running in circles repeatedly while trying to complete an objective since some of the areas are winding and convoluted. Sometimes paths would be arbitrarily blocked so that I had to take the long way around to an object or person that I could actually see directly in front of me through the invisible wall blocking my way.

I wanted to observe and comment on the game’s treatment of the themes of mental illness, given that the horror genre is so populated with games that often throw mentally ill people under the bus, but I genuinely could not get far enough to really formulate a proper assessment. Exploring the mindscape of a character and rifling through his memories to solve a mystery sounds like par for the course for the genre, but I doubt I’ll ever see if the game does anything truly interesting with that. At the very least, it’s obvious that you’re supposed to sympathize with the protagonist.

Supposedly about halfway through the game you gain an ability that allows you to “interrogate” memories and look at alternate versions of them, but I couldn’t make it that far. Hopefully, future patches will iron out some of the issues I encountered because I sincerely would love to know how the story ends.

The Piano was developed and published by Mistaken Visions and is available now on Steam for $9.99.