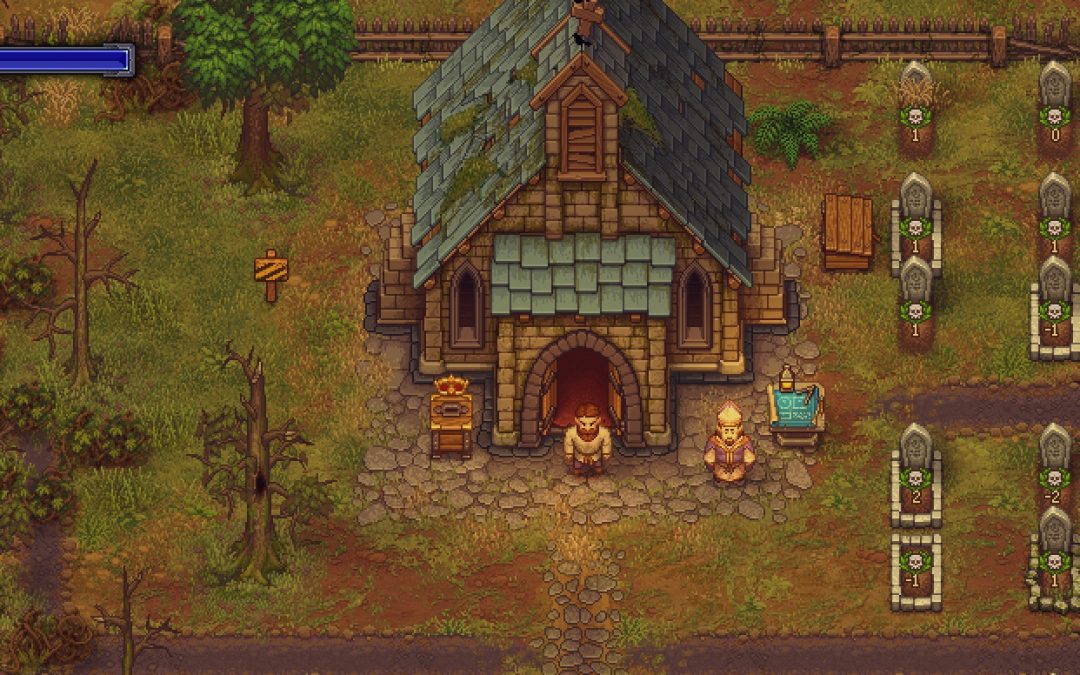 Sidequest was provided with a copy of Graveyard Keeper for PC in exchange for a fair and honest review.

What a difference an update (or four) makes. I played Graveyard Keeper in its Alpha version recently and, despite there being a number of bugs, the overall experience was generally engaging. The full version was released on August 15, 2018, but since then it has gone through several updates. Version 1.024 was released on August 18, 2018, and Lazy Bear’s repeated improvements since launch show they are taking feedback from players on board. However, there are still a number of fundamental issues that undermine overall enjoyment.

Graveyard Keeper has a macabre sense of humour alongside its crafting gameplay. In this “Stardew Cemetery” resource management game, players control a character transported from the modern world to a medieval village, and are landed with the responsibility of looking after the local cemetery. Players can harvest flesh from corpses (with the aim of maybe selling this to unwitting villagers as “meat”), decide whether to take a shortcut with burials, build a farm, or get into arguments with a talking donkey, as you do. Much like Stardew Valley, there is also an opportunity for combat and exploration; though initially combat takes place at certain times with set types of monsters, there is a more structured combat element unlocked further into the story. The game is much more polished, compared to the Alpha version. In that version, for example, corpses would arrive at a rate that made it difficult to manage. In the full game, the rate of corpse arrival has been balanced to ensure new players aren’t quickly overwhelmed. It was always possible to throw bodies in the river rather than go through the hassle of burials, but only if the player was aware of this option. Now, the player is given a prompt to try it out, which gives them a clearer idea of possible consequences, as well as an alternative and ethical disposal method. A map has been added, giving players a better sense of the world. Day cycles, which also tied the availability of some quest-giving NPCs to certain days, have been lengthened. This change is a particular relief considering that traveling across the map and back could take an entire daytime, though the recent teleportation stone (which allows players to fast travel) has also reduced this issue.

The updates include changes to tool efficiency, shorter crafting, bug fixes, and better balancing. The general idea has been to offer players a “more smooth experience.” In this sense, Lazy Bear has been successful. The game feels like a more finished product, though it’s hard to say if this is a finished product. This speaks to a wider industry practice of releasing a game whilst still tinkering behind the scenes. The recent No Man’s Sky patch is an extreme example, but in an age where updates can be downloaded quickly, it’s not uncommon to see day-one patches. Four patches in the space of four days is unusual, however, and some of these patches seem to be in response to player feedback. In the Steam comments, players were concerned at the number of updates in such a short time, wondering why this was occurring after a pre-release phase. Still others who had played the Alpha version felt Lazy Bear was “caving to public opinion” for making changes and, according to them, reducing the difficulty.

Some of these updates haven’t helped everyone, unfortunately. There is a great deal of grinding for resources in Graveyard Keeper. Though this isn’t unusual in crafting and resource management games, the amount of work, energy, equipment, and materials some tasks required began to feel draining. Energy determines how much you can craft before needing to sleep or eat food, and players will find they need to do this a lot. Sleeping isn’t ideal or possible when you’re in the middle of a swamp far from home and you’re halfway through mining some ore. Food is portable, but the food you can craft early on in the game replenishes relatively small fractions of energy. Players can buy more nourishing food, but this, of course, costs money; I had to spend 10 silver on a new whetstone (essential once your original wears down because, without one, you can’t repair your tools), but a burial pays just over one silver each time. I therefore found myself somewhat reluctant to splash out on any pies from the local tavern.

Certain resources can be a little difficult to track down, so it was a relief to see that one update made a fundamental and previously finite resource infinite instead (i.e. you would still have to collect it, but the resource block wouldn’t disappear). However, players since day one (or before the official launch) can’t benefit from this if they already exhausted the resource before the update appeared. So far as I can tell, the only way to change this at the moment is to restart the game and lose all progress. I’m glad this resource has been changed, but as one of the early players of this game, it’s hard not to feel a little soured that I miss out on a benefit that later players can obtain.

Overall, Graveyard Keeper seems a little bit calmer in this incarnation, though there is still a sense that there’s too much going on at once. Whilst the Alpha felt highly pressured and overwhelming at times, some of this has been eased with the updates, such as the increased day length. However, the skills trees feel just as complex and unintuitive. There are several competing tasks, including ones that may or may not be directly related to your main quest (i.e. returning home from this strange, medieval world). I found myself, 10+ hours in, having to keep a list of what I was supposed to be doing because it was incredibly easy to get distracted by the twelve other things I also had to do. Part of the Theology Skill Tree.

As a completionist, trying to finish every quest is kind of how I play games anyway (my many hours in Dragon Age: Inquisition are proof that I can’t not collect all the things). Here, completing every quest feels more forced. For example, I told a character that I didn’t want to accept their quest. Well, tough, the game told me, you’re doing it anyway. I wasn’t expecting complete agency in what I could or could not do, but if everything seems important, then nothing is.

To get a sense of this, imagine that you’re playing a game with a main quest and side quests, but you can’t skip any of the side quests because they may or may not be vital later. Unlike an RPG, where you can maybe complete several side quests at the same time because of differing requirements, most of the ones in Graveyard Keeper require similar, if not the same, resources to finish them. At several points, I had to make a judgement call on what would be the best thing to finish first, before starting the grinding again, for the same resources, for a different goal. It started to become repetitive, only driven forward by the operant conditioning that small achievements can encourage.

Graveyard Keeper has grown significantly since its Alpha version. For those interested in a Stardew Valley-like experience, but with added embalming, this may be an interesting game to dip into. However, though grinding is an expected part of resource management games, it’s easy to feel worn down despite the slight progress.