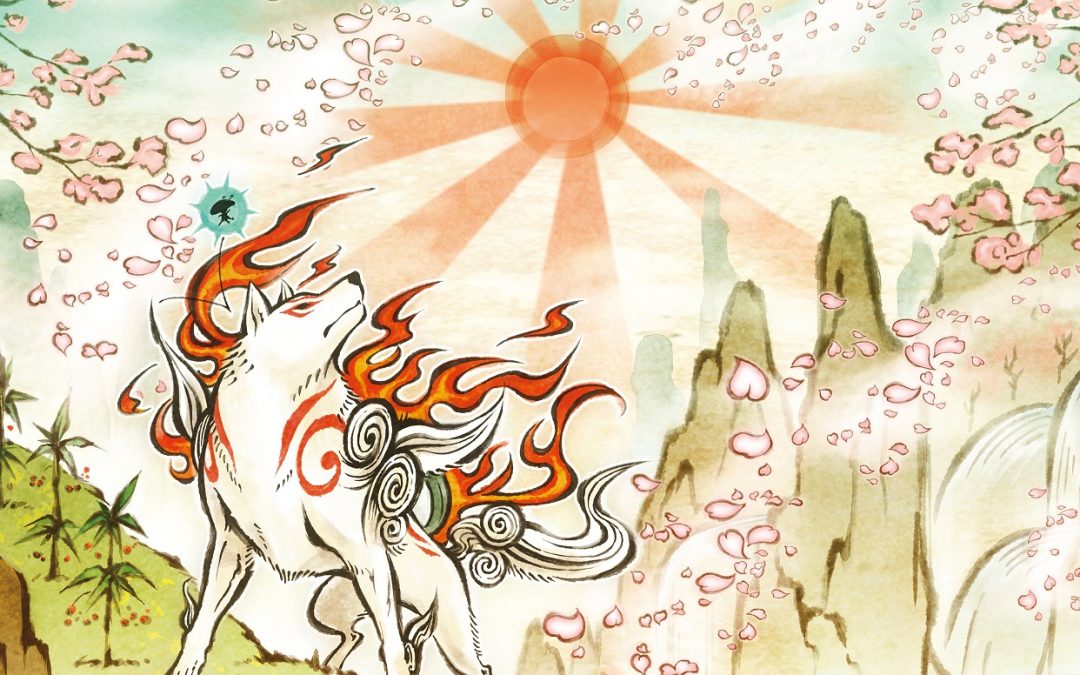 This year, I played cult classic Ōkami for the first time. Developed by the short-lived Capcom offshoot Clover Studio, the game was first released on PlayStation 2 back in 2006. Since its original release, Ōkami has been praised for offering up extraordinarily beautiful escapism: its charming gameplay and painterly worldbuilding have earned Ōkami the reputation of being one of the best games ever made. In the 12 years since Ōkami’s release, however, what nobody mentioned was the game’s rampant sexism.

Ōkami opens with a 20 minute cutscene introducing the player to the world and its folklore. We learn about Nippon and the role of old gods in the lives of villagers. It’s certainly a gorgeously-crafted opening, mimicking traditional Japanese art styles that highlight the beauty of nature. We meet sun-god Amaterasu who embodies a white wolf that the player controls. We also meet her tiny artist companion, Issun, also known as the most loathsome video game character I have ever met. Halfway through the opening scene, we chat with Sakuya, a wood sprite with a cut-out outfit revealing her butt and gravity-defying boobs. Issun leaps out from her cleavage, rattling off inappropriate remarks about Sakuya’s body. For me, it’s a jarring moment and one that instantly spoils any appreciation of the game’s artistic qualities. Unfortunately, as the game progresses, the misogyny does not improve. Every young woman you meet has perky breasts, with one character described only as the Busty Priestess, whilst older women are either stereotyped as angry fishwives or as desexualised grandmas and crones. As a femme who has spent a lifetime experiencing misogyny and objectification, this is disheartening enough. To make matters worse, our pal Issun constantly makes degrading comments and catcalls any time you encounter young women, and it’s clear that the player is supposed to find his remarks amusing. In comparison, Amaterasu is not subject to Issun’s misogyny, despite her portrayal as a woman in Japanese mythology. In Ōkami, she takes the form of a wolf which serves to neutralise her sexuality. She is also referred to as “mother to us all” by mortals and gods alike, highlighting her role within folklore as a maternal figure. Crucially, Amaterasu represents an idealised version of motherhood, placing her on a pedestal whilst the game’s few mortal mothers are depicted as obstacles to their sons and to the player. Mothers are desexualised, having served their use to men as wives and childbearers, and Amaterasu is no exception. The most she receives in the way of derision is Issun’s genderless nickname of “furball.”

Crucially, Amaterasu represents an idealised version of motherhood, placing her on a pedestal whilst the game’s few mortal mothers are depicted as obstacles to their sons and to the player.

It’s important to mention that, since World War II, Japanese beauty standards have evolved to more closely reflect western values. Traditionally, Japanese beauty was defined by fatter and curvier figures, narrow eyes, and round faces (as well as the problematic preference for light skin). After exposure to western media and culture after the war, Japanese women are now expected to idealise thinness, big boobs, and round eyes. We can see these western standards upheld throughout video game history, from Lara Croft’s iconic pointy hourglass figure to the sexy jelly physics of the Dead or Alive franchise. In an industry historically dominated by men, it’s no surprise to see female characters created primarily for the male gaze. As video game culture has evolved, however, we’ve seen some smart critiques of boob physics, the objectification of female characters, and the hostility that women and nonbinary people face both within the industry and as consumers. So why haven’t I come across a single criticism of Ōkami’s sexism in over a decade?

In fact, the game features a 93 percent score on Metacritic, with reviewers describing Ōkami’s characters as “memorable” and “kooky” but definitely not sexist. Ōkami’s Wikipedia page notes that the game received criticism for its difficulty and occasionally-clunky controls, but not for its portrayal of female characters. A cursory online search brings up a handful of feminist critiques since the game’s HD re-release in 2012, and a whole bunch of people defending the game’s misogyny because, well, apparently that’s just what we get in Japanese games.

It’s this perception that has allowed the western gaming community to utterly fail to notice—or simply choose to ignore—Ōkami’s sexism for so long. Japanese culture is hardly alone in upholding patriarchal values, with western media equally at fault. In addition, Western patriarchal values have influenced the sexualisation and objectification of women in media worldwide. The voices who suggest we quietly accept misogyny in Japanese video games are the same voices that ridicule female characters in Battlefield as well as actual real-life women working in the western games industry.

The west has long romanticised and fetishised Japanese culture, creating a twisted relationship with Japanese media that allows white, western, and usually male consumers of eastern culture to uphold their own western patriarchal values.

We can and should demand better from our games, regardless of where the developing studio is based. The west has long romanticised and fetishised Japanese culture, creating a twisted relationship with Japanese media that allows white, western, and usually male consumers of eastern culture to uphold their own western patriarchal values. Filtered through a western lens, Japanese culture becomes all cherry blossoms, submissive women, and tentacle porn. As a result of this othering, white male gamers have recommended Ōkami to me throughout my gaming life, promising escapism and relaxation, without a sliver of awareness that my experience with Issun and his “busty babes” might differ from theirs. In the end, I spent all 60 hours of this game on-edge and exhausted by its relentless othering of my own body.

It’s time for white and western audiences to create a gaming culture that does not abide misogyny and casual sexism. Western othering of eastern cultures and the global south is a long-standing problem that impacts all aspects of our society, including western gaming culture and the gaming industry. In order to tackle sexism in gaming, we need to address sexism in society as a whole. It’s a big task. Thankfully, there is hope for gaming. A 2016 study by Teresa Lynch et al. suggests a steady decrease in the sexualisation of female characters in video games, a trend that might be supported by Nintendo’s recent decision to alter Samus’ character design in the upcoming Super Smash Bros. Ultimate.

As a lot of people may have noticed, ZSS' breast size has been reduced quite a bit and has more muscle definition than the Smash 4 version. She and her suit seems to resemble her Samus Return looks a bit and frankly, looks way better IMHO pic.twitter.com/B9yByBG1jK

In today’s gaming climate, women and nonbinary folks are outspoken about poor representation in our games, and how this impacts the way marginalised people are treated throughout our gaming culture. If Ōkami were released today, it’s unlikely that it would slip by without any feminist critique at all, and that’s a positive sign for gaming. Yet even in the year of our lord 2018, male western gamers continue to proclaim Ōkami as one of the greatest games ever made whilst defending its misogyny as a justification for their own sexism. Western gaming still has a long way to go before it stops centring white male experiences and perceptions, and starts respecting the rest of us.