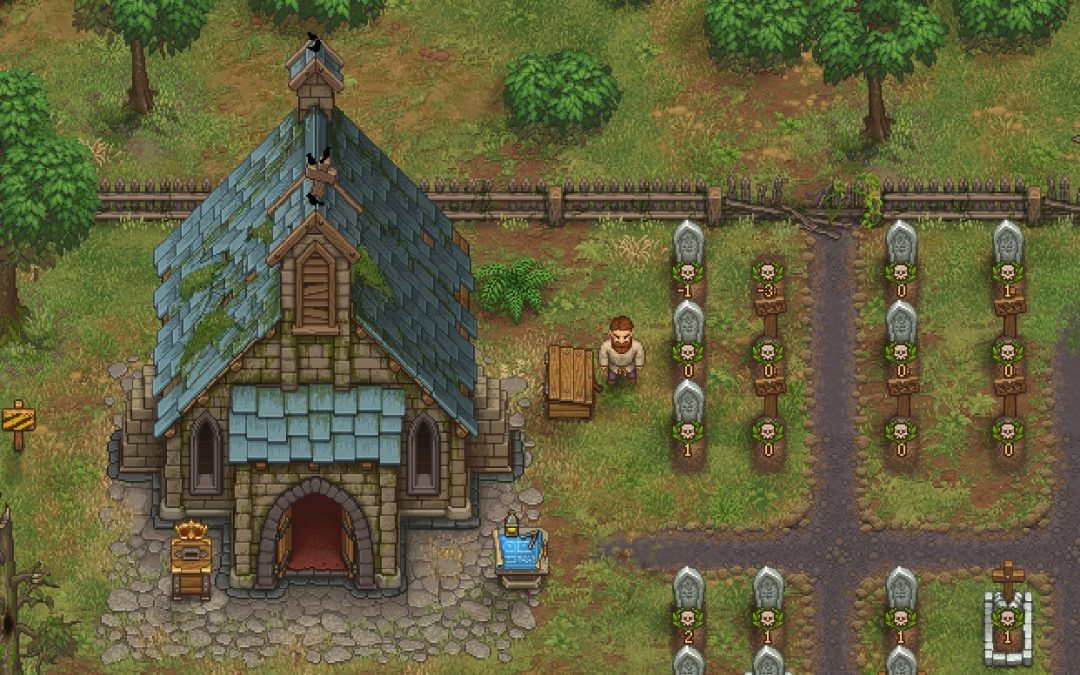 Graveyard Keeper‘s Alpha release has been creating some buzz. Thanks to its focus on crafting and resource management, some have already drawn comparisons to Stardew Valley. Instead of farming crops, however, you’re harvesting corpses (literally).

You play as an unnamed character from the modern world who suddenly wakes up in a medieval village. Everyone insists you are the local graveyard keeper, despite your many protests and demands to return home. To be reunited with your family, you must fulfill the role foisted upon you, managing the cemetery and completing various quests as you work towards your escape.

Dialogue options with the local tavern-keeper

It’s an interesting premise, with humorous characters to meet alongside everyday tasks that involve gardening as well as burials. There are also some difficult choices. Players can, for example, cosy up to a character called the Inquisitor, making a powerful friend in the process. However, he’s a religious zealot and his treatment of the villagers is merciless. The connection to him might prove useful, but Graveyard Keeper doesn’t pull its punches. If players choose to work for him, be prepared for what that entails.

Another grim potential task involves harvesting flesh from the deceased in the morgue. The aim? To sell it on to the local tavern as “meat.” Strangely, my lapsed Catholicism and love of Hannibal meant I found this task less disquieting than palling around with a religious authority figure.

I’ve only scratched the surface of the game for a number of reasons. One is that, this being an Alpha version, there are still bugs. Lazy Bear makes this clear from the start, and a quick check of the title screen lists several issues found and fixed.

However, problems interrupted my enjoyment several times. Bodies weren’t delivered, meaning a vital cash flow was blocked, and speech bubbles sometimes layered unintelligibly over each other. At one point, I unlocked an area, travelling up the road while having an important conversation with the Inquisitor. On the way, a random villager going the other direction bumped into my character, forcing him to moonwalk all the way back to the start, where they both got stuck.

The bugs are manageable for the most part as long as you save often by having your character take an in-game nap. But they made me reluctant to wander around the beautifully designed environments, just in case I randomly got stuck on an asset and had to start over. Lazy Bear are working diligently to fix these problems with updated versions, so this should pose less of an issue for the future.

What really messed up my progress, however, was the sheer amount of things to do and the lack of information.

One of the first jobs is to clear up the cemetery for the bishop. Players can only interact with him on one specific day each week, and the game employs a day/night cycle to achieve this. This is the same for other quest-giving NPCs, each available on different days. In itself, this isn’t a problem, but the lack of useful information from the bishop, plus this wait, adds an additional obstacle to solving the task.

The cemetery has a minus rating, which you need to change to a positive by repairing it. The goal seems achievable at first, until the daily delivery of fresh bodies starts adding negative points as they’re buried. After visiting a helpful Reddit thread, I realised I was focusing on crafting inefficient repair kits, when I should just be building gravestones. I had wasted a lot of time and resources, unclear on how best to proceed.

This may be deliberate in order to make the player think inventively and consider the relentless grind of capitalism. It’s possible to throw fresh bodies into the river rather than bury them, removing the potential negative points they bring. Besides the moral dilemma, there are no consequences in-game for this so far (though be aware the full version may change this). Players can sell human flesh as food to unsuspecting consumers, all in the name of trying to get home. It’s an intriguing commentary on how capitalist business practices encourage taking short-cuts, rewarding moral and ethical compromises.

Progress is measured and kept in check by skill trees. These allow players to build the equipment and materials needed to move forward. At first, they are visually daunting and lack meaning, with little information given on where best to focus your efforts. It’s easy to accidentally invest in a skill that just won’t be useful until you’ve unlocked something else. For some, this trial and testing may be part of the fun, but by that point the re-starting and bugs had already eroded my patience. All of this may sound like the game was a grind. Yet, Graveyard Keeper was still a fun experience, achieving this partly through the setting and unique premise. It also manages to fulfil that most essential element of a crafting/resource management game: a sense of accomplishment. My frustrations dissipated as I learned more and made small, significant steps, ensuring I kept coming back to it.

For those who like to learn by making mistakes, Graveyard Keeper is a game you can jump straight into. For others, maybe read up on some guides and watch an introductory let’s play as this is a game that could definitely benefit from a more explicit structure. It may leave players feeling overwhelmed at first, but Graveyard Keeper’s macabre charm is worth looking into.