Diaries of a Horde Druid: The War of Thorns 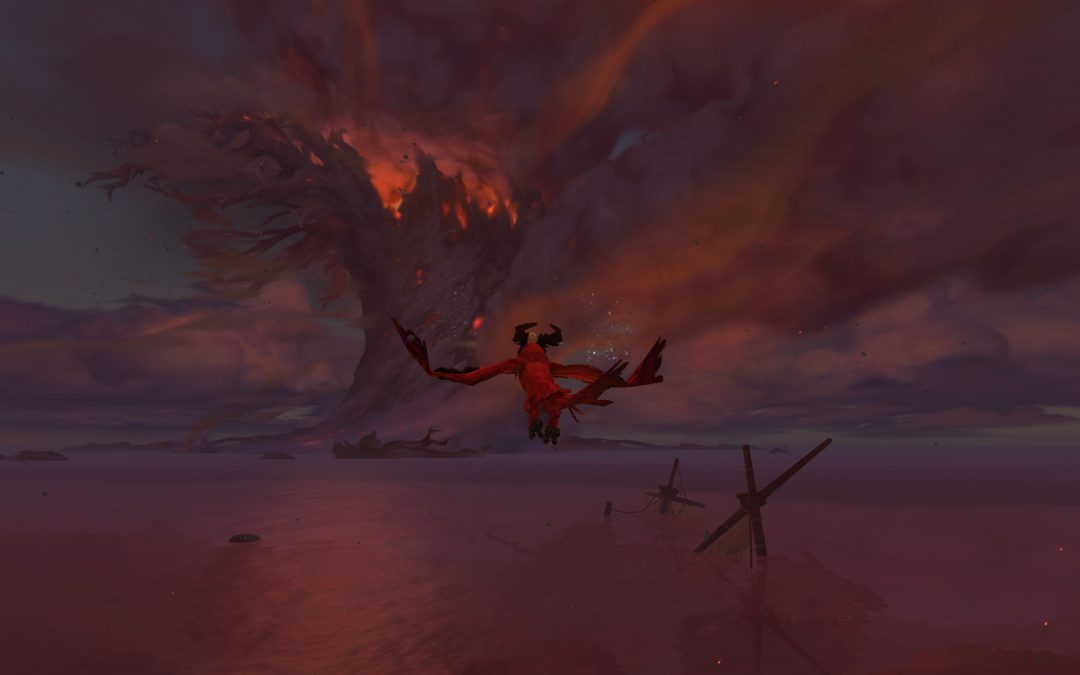 World of Warcraft‘s newest expansion, Battle for Azeroth, launches on August 14th. With the Legion vanquished, the Horde and the Alliance have decided that the best use of their newfound freedom from the constant threat of annihilation is to… fight each other. Again.

Let me get ahead of this with a disclaimer: I didn’t play Warcraft. The Horde vs. Alliance dynamic has never really mattered much to me and I often prefer storylines where the two decide to work together or at least tolerate each other. I sided with Horde initially because I liked their characters better, then stuck around when I read a bit more about the lore and the whole “orcs were slaves and kept in camps” bit. To me, the Horde has always stood for independence, acceptance, and freedom. There’s a camaraderie present in the Horde that I don’t find in the Alliance and I really, truly love the ragtag band of races that’ve partnered up to form the Horde.

Alongside my love for the Horde, I get emotionally invested in my characters. I’m not a roleplayer, but I still have a perception of how my characters would behave in this world. My troll druid is fiercely loyal to the Darkspear Trolls, but still places their faith and focus in the druidic order. My priest joined the Horde because her pandaren friends did, and she maybe, just a tiny bit, regrets it. My Nightborne warlock would burn Orgrimmar to the ground alongside Teldrassil if she thought it’d let her summon a bigger, better demon.

You get the idea—my characters are, to me, distinct in their beliefs and how they embody the ideas of the Horde. So when I rolled up to Sylvanas on my druid to start the Battle for Azeroth pre-launch event, excited to see how Blizzard was going to dispel the perception that Syl was just pure evil, I was distressed, to say the least. Without spoilers, let’s just say that in no way, under any circumstances EVER, would any druid agree to the plan Sylvanas is laying out here. Unless I’ve fallen into the Nightmare and I didn’t even realize it, there is absolutely no way my druid would ever, ever even consider the thought of killing the person she’s suggesting we kill.

But there’s no choice. I can’t protest or demand an explanation to get additional dialogue. I can’t voice the very real threat her plan would pose to the entire Emerald Dream—a dream realm integral to the druidic powers in WoW and where our god, Cenarius, currently resides. She doesn’t address me as a druid, doesn’t acknowledge that what she’s asking of me is exceptionally cruel given my chosen calling. I’d even be happy with her demanding I obey her orders, a display of her powers as Warchief of the Horde. Instead, she just gives me an “okay Champion, let’s go do this” and expects me to follow without complaint.

I understand that this is an MMO with millions of players. There can’t be infinitely branching dialogue trees or custom dialogue for every single situation, but matters like this deserve something, anything to make my character feel like a real, distinct part of the world. Give me a few extra dialogue prompts to say “Hey, this sounds like it will go badly for the Dream” and see how she responds. Toss in an extra line from Syl that starts with “I know you’re a druid, but…” With how things are now, I feel like a cardboard cutout, a copy of every other Champion of the Horde whose class choice only determines what buttons I get to press when.

I compare WoW to Final Fantasy XIV: A Realm Reborn a lot, and I’m going to do it again, because FFXIV makes an effort to make your character (the Warrior of Light) feel unique, proving that MMOs can pull it off with just a few clever dialogue changes. In Stormblood, when an important NPC was badly injured in a cutscene, the other NPCs turned to me, a White Mage, and yelled at me to stop standing around like an idiot and to help them heal her. In the cutscene, I ran to her side and began channeling a generic shimmery heal over her. When I failed the following instanced battle and went back in as Bard, this bit didn’t happen—instead, I was asked to hold her down while the NPCs healed her, and the shimmery healing was focused on Krile’s magic. None of these animations or interactions were particularly complex, but they were unique, and that uniqueness felt great. The NPCs acknowledged that I was a Job that could use healing magic and the dialogue shifted to reflect that. A simple 30 seconds worth of cutscene variation between the two Jobs was all it took to make me feel like a real person in this world and not just some blank slate that everyone orders around constantly.

WoW has never been able to replicate that feeling for me, and up until now, that’s been okay. But Legion leaned heavily into class fantasy—I’m not just some druid who fights in the Horde, I’m an Archdruid, one of the highest ranking of the entire druidic order. To top it off, I’m one of the only Archdruids left after the Nightmare corruption ran rampant through Valsharah and we were forced to fight the other Archdruids. Some bosses even acknowledged this, with the Archdruid in Darkheart Thicket rambling on in his madness about a powerful druid among the dungeon group threatening his position. It was never very personal, and my character never so much as twitched a facial muscle in response, but it was starting to feel like I was maybe someone unique and important in this world.

Battle for Azeroth‘s pre-patch event feels like two steps forward, three steps back in creating a unique character experience. To go from being an Archdruid to someone who would blindly agree, without complaint, to threaten the Emerald Dream is incomprehensible to me. For the first time since I rolled Horde in Cataclysm, I opened the Blizzard shop and stared at the Faction Change service, wondering if the $25 was worth escaping the cognitive dissonance I was feeling about being a Druid in the Horde.

I still have faith that Blizzard will make an interesting, complex story out of Battle for Azeroth. I don’t think the Horde is being outright evil by attacking Darnassus and Teldrassil, either. Sylvanas makes an excellent point regarding Darnassus and its strategic importance to the Alliance, and her skill as Ranger-General of Silvermoon is apparent in her tactical decision making in this scenario. It just feels like everything I did in Legion, the class identity that I built up over the last two years, was for nothing—and frankly, it’s a pretty bad feeling.