Where Are the Women?: Oversight and The Game Designers Trailer 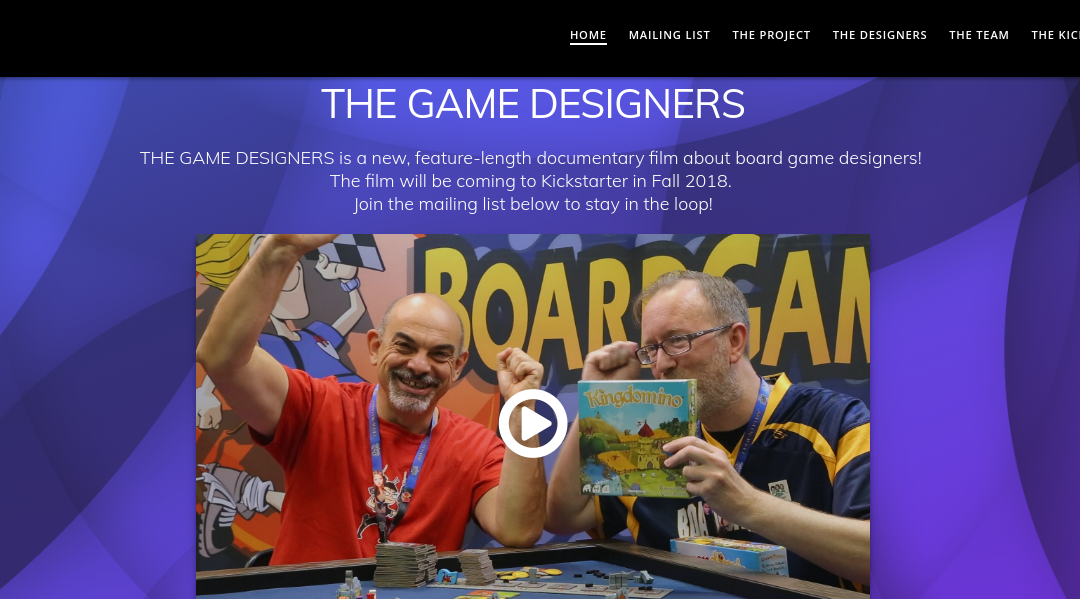 When the movie trailer for The Game Designers documentary dropped last week, “where are the women?” was the question on a lot of people’s minds. The 2 minute, 17 second trailer posted on both the project’s website and Zoom Out Media’s Facebook page shows only three women and they appear to be players, not designers. Comments on the Facebook post were mostly congratulatory, but then the comments started rolling in asking if any women took part in the project.

The Game Designers is a board game fan documentary by director Eric Rayl, who, according to the website, “decided that telling the story of board game designers would be a worthy endeavor” after he spent months working on his own game. But here is where it gets more complicated. Along the way, the project caught the attention of Scott Alden of BoardGameGeek, and it now lists Alden as the Executive Producer. For those not aware, BoardGameGeek is one of the most well-known websites for tabletop gaming news, reviews, and enthusiast forums. It’s not out of line to assume that being associated with the website adds validity to Rayl’s documentary.

So when the trailer’s four featured game designers were all white men of a similar age, it’s fair to question, “where are the women?”

To add to this issue of missing women, when the trailer was released, it appeared that the website was completely devoid of any mention of women involved in the project. The Game Designers team was quick to action and have updated the website “to better represent the all those” that had been already been interviewed.

The update didn’t affect the four featured men in the trailer, but out of the 16 designers, three are women. Additionally, there appear to be only two designers of color in the mix.

It’s disheartening that, in 2018, a project like this would even think to release such a singular perspective. Rayl’s public apology on the Zoom Out Media Facebook post as well as additional comments to me via email, provide insight. According to Rayl, he went onto BGG and searched for the most prominent and well-known board game designers to find potential interview subjects for his film. He used statistical data from several different means available on the site to come up with a list of 70 designers he felt were the most prominent and well-known. Although Rayl did not share the exact metrics he used to come up with his list, it can be reasonably assumed that game rating might be one of the factors. If so, it’s important to look at the demographic of BoardGameGeek users as a game’s rating is based on vote from the user community.

According to the site’s Geek Annual User Poll 2013, out of over 4400 users, the vast majority identified as male (92 percent) and stated their favorite game type were eurogames (49 percent). Rayl stated that he used this data as a starting point, but even so, the demographics of BoardGameGeek users does not represent the whole picture, or even close to the whole picture, of the board gaming community.

Another point of failure is Rayl’s admission that for two and a half years, he was essentially a one-man show. It still remains troubling that after attending multiple game conventions, traveling the world and meeting hundreds of game designers that an oversight like this could happen.

It’s unclear whether or not BoardGameGeek’s Alden viewed the trailer before posting. Says Alden via email, “I am disappointed that the trailer does not reflect the range of diverse voices in the board game design community. We need to do a better job of that going forward and we are already taking steps to address it. We have updated the website to give a more complete representation of the people that have been interviewed for the documentary so far, and we are reaching out to more women and people of color in the design community for interviews at GenCon 2018 and beyond.”

It raises the question of who did view the completed trailer before release? And if the answer is no one, then why not?

In many ways, the project does reflect the landscape of tabletop game designers today, including the community’s problems. Rayl said that after meeting and seeing hundreds of board game designers, he would say that the vast majority are white men, noting that there is a lot more diversity in game players. And he’s not exactly wrong. If you look at the list of games that are both sold at Target and have been played on Geek and Sundry’s TableTop series, you’ll find that all those well-known games have male designers.

Another way to address the lack of women in the project might be to revisit its intent and description. When your website claims the movie is for people who identify as “a board game player, a board game designer, a nerdy friend, or someone who is just interested in the subject, this project was created for YOU,” that it follows “professional and fledgling board game designers” and states the director “went and collected all the stories he could find regarding the subject,” it’s bound to raise some eyebrows when it doesn’t include many of the voices and perspectives making games today.

If the intent was to make a game designer documentary aimed at BoardGameGeek users and eurogame fans, own that.

The real question is how will the project be adjusted. Both Rayl and Alden have made statements, offering apologies and stating they’re working on interviewing more diverse voices at Gen Con. The apology feels sincere and is an excellent place to start.

But if Rayl and Alden’s motive isn’t “let’s sit down and see what happened” instead of “let’s fill a few spots with women,” then the new content could easily seem like tokenism, or, to the gatekeepers in the community, “caving to the haters/SJWs” rather than a true desire for representation. With the turnaround in recent projects like Disney’s Coco, it’s possible that the critique, which albeit should have happened much earlier, will improve the film’s representation of the broad world of board game designers.

In his comments to me, Rayl asked that I “please report this fairly.” I won’t lie, I had a similar reaction to that as I did to The Game Designers trailer. At first, I was angry. Of course I’d be fair. I’m a journalist. I use facts and data. That’s what I do.

And then, I heard the unspoken plea. “Please let my side of the story be heard.” A simple call for validation.

That’s what people with marginalized voices are asking, too: please let our stories be heard.