Review: Cult Following Failed to Convert Me, and That’s Okay 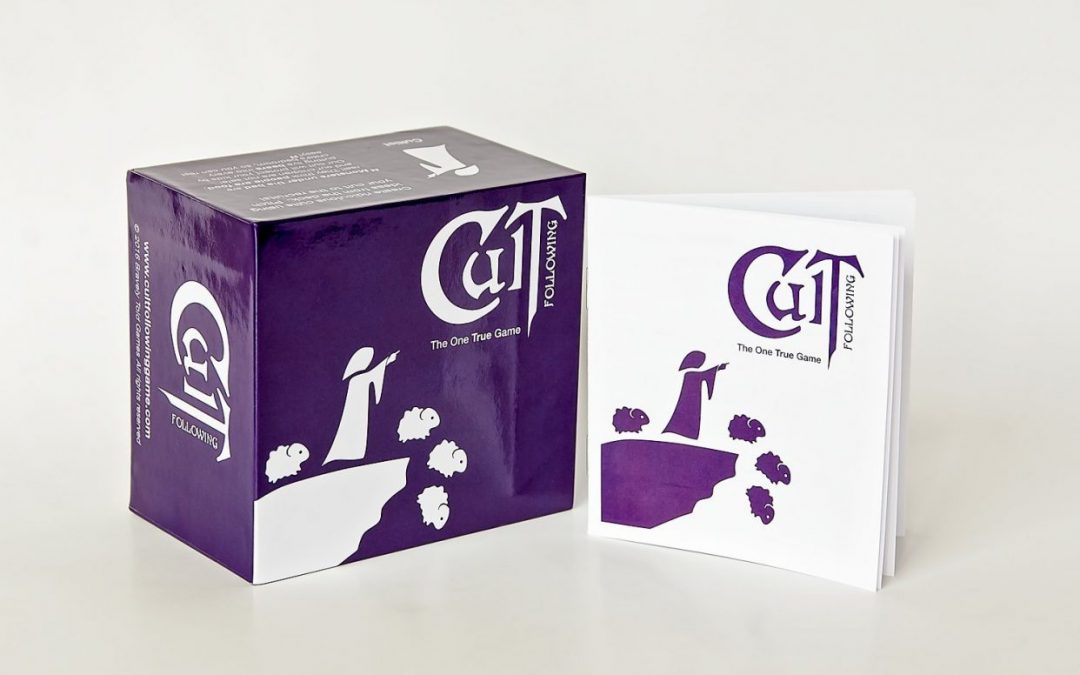 Sidequest was provided with a copy of Cult Following in exchange for a fair and honest review.

I don’t have the charisma of a cult leader, but Cult Following lets me pretend that I do.

Cult Following, created by Bravely Told Games, is a creative storytelling game sort of like if Cards Against Humanity had a charismatic baby with Slash. Two or three players become cultists each turn, choosing three “sign” cards, which are double-sided and contain traits to assign to your cult, from a hand of five to construct their cult ideals. They then pitch that idea to the remaining players—“recruits”—who can ask questions from their question cards to find the right cult for them, based on the cultist’s chosen traits and improvised creative thinking. Once a cultist has gotten two recruits to join their cult, they win the round. There’s no real win state—like many other storytelling games, playing Cult Following is more likely to end when players feel like ending it rather than because someone has “won.” While win-oriented players might find this a bit of a drag, it makes the whole game feel rather low-pressure, which can be a relief for those who find the creative exercise to be a struggle.

Unfortunately, its similarity to other creative storytelling games means it has some stiff competition. It’s a great introductory game, one that can easily be broken out for players who aren’t super experienced with roleplaying or improvisation, but it has to stand out against games like Slash or even Gloom, which can also be exercises in storytelling for those who enjoy it. Players may ask questions from question cards to help them choose which cult they’d like to join.

But I, at least, already have a pretty solid set of games I use to introduce people to tabletop. I’m more likely to reach for One Night Ultimate Werewolf for on-your-feet thinking or Slash for creative invention than I am Cult Following, which is not because it’s a bad game—it isn’t—but rather because being a scumbag liar and writing elaborate, bizarro fanfic feel like better hooks for the people I know than designing a cult. The lack of a win state, too, isn’t a bad thing, but can feel a bit weird for new players who are accustomed to games being won, rather than experienced.

Again, none of this is bad. I quite like Cult Following and think it’s a lot of fun with the right crowd. It scratches the taboo itch of something like Cards Against Humanity, but doesn’t quite grab me as much as Gloom. Simply put, there aren’t a ton of mechanics to engage with beyond your own creative invention. And that’s fine! Really. But Cult Following just doesn’t quite make it beyond “fine,” in comparison to other games that I own.

The same can be said for most of the video games I have; I play them and enjoy them, but am not often compelled to pick them up again. But somehow it feels so much sadder with a game like Cult Following—it’s good! Really! But every time I see it on my shelf I have this pang of guilt, like I owe it to the game to spend more time on it, even as I sit atop a crumbling pile of Steam games that I’ll probably never get to with no feeling about them whatsoever. Is it that it’s taking up physical space? Is it that I got the copy to review and took roughly six thousand years to get around to it because I felt so guilty that I didn’t want to invest lots of time in it? I don’t know!