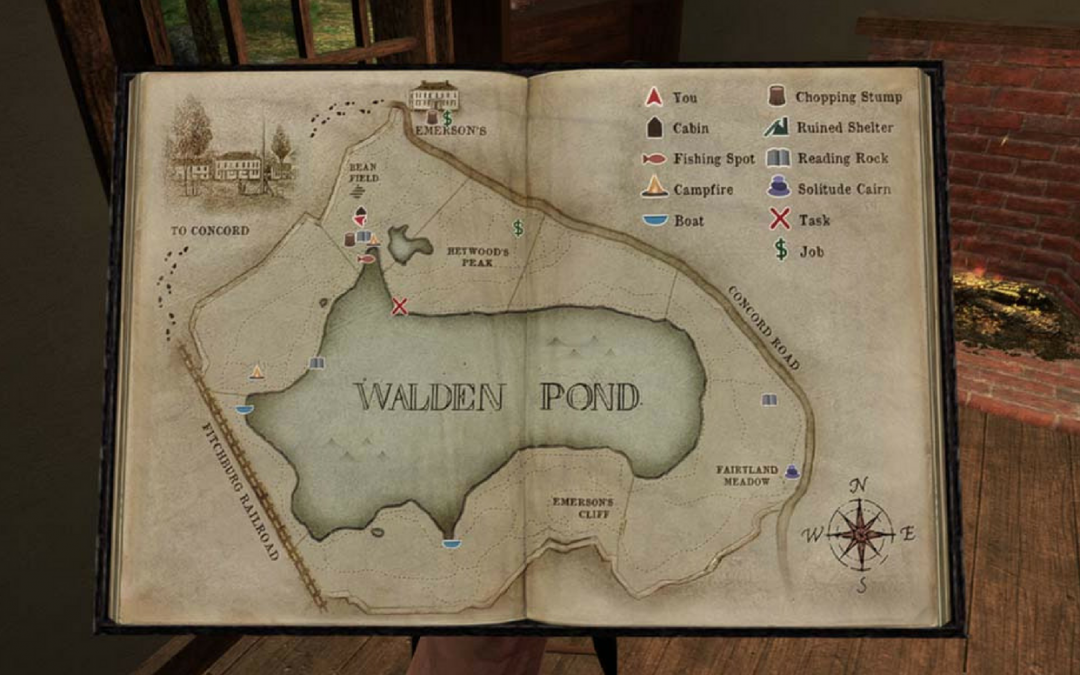 Sidequest was provided with a copy of Walden, a game for PlayStation 4 in exchange for a fair and honest review.

Full disclosure: I have never read Henry David Thoreau’s Walden, and I probably never will. I studied English in college and somehow never came up against it, and we live in a world with too many good books that I don’t have enough time to read.

I didn’t play Walden, a game to experience the book—I played it because when I first heard of it, it was from a New York Times headline that said the game promised “stillness,” something which very much interests me in games. I like survival elements, I like idleness, I like some inspirational bullshit about forging a path and living close to the earth and the interconnectedness of living things; Walden, a game is a natural fit for me.

Generally, we think of a review as telling you whether or not something is worth your time. I can blather on about my experience, but you’ll always be wondering, yes, but is it any good? Even setting aside the eternal question of what “good” means in terms of games, the answer is complicated. Walden is not something every lover of games will enjoy. It’s slow, plodding, introspective, even pretentious. Its mechanics are simple. There seems to be no way to lose. But is it any good? With Walden, a game, it’s not about whether or not it is good, but whether it achieves its aims. While I don’t pretend to see inside the minds of the game’s creators, Walden, a game takes the literary version of Thoreau’s experience in living deliberately—that is, “to front only the essential facts of life, and see if I could not learn what it had to teach, and not, when I came to die, discover that I had not lived.”—and makes it something for the player to feel rather than read about. Certainly Thoreau’s words are inspiring, but to live them, to feel the need to balance food with inspiration, represented by a bright, intensified color palette, is a different experience.

There’s no outright danger—Thoreau himself was famously supported by his family and friends, who fed and clothed him when necessary—and, to my knowledge, no failure state in the game itself. You build your shelter and balance your needs, including food, clothing, tiredness, and fuel, using the remaining daylight hours to explore the beauty of Walden Pond. Each thing you discover, whether person, plant, or otherwise, fills your journal up with passages directly from Thoreau’s text. Arrowheads scattered around the level can be examined to reveal some of Thoreau’s inner thoughts. These fragments are the game’s main collectible, and in fact, its main reward. While you can complete little quests, it’s filling up the journal that’s most satisfying.

Overexerting yourself means you lose hours to catching up on in-game sleep, while running out of food means you over-exert faster. Real-life Walden was not an experiment in living entirely off the land, but living in harmony with nature and civilization, wandering between the two at will. Contrary to expectations, video game Thoreau gets inspiration not from being deep in the woods, but from being close to civilization; he thrives at the boundaries, absorbing both worlds. You’re never far from civilization in Walden, a game, with Ralph Waldo Emerson, Thoreau’s friend and mentor, lingering at various campsites around the pond, and the sounds of horse-drawn carriages sometimes floating up despite there being no carriages to be seen. It doesn’t take long to walk to Concord or Emerson’s house, allowing you to earn money that can be spent on paying Thoreau’s back taxes (you do, in fact, get thrown in jail if you refuse to pay, just as Thoreau himself did), taking care of your family’s debt, or sprucing up your home in the woods with amenities to eliminate some of the daily work you have to do.

And you do have to work. The game is a balancing act between finding food, repairing your shelter and clothes, and finding fuel for your fire, in addition to all the other tasks you might come upon—providing clothes and food to escaping slaves, for example, or sending off your manuscripts to publishers. The manuscripts feel like one of the truest parts of the game, as the first few return no money and instead lead to letters suggesting that Thoreau ought to simply be happy that somebody has read and been made angry by his work and that that should be payment enough.

There’s a sort of kinetic joy to the work you do in rowing, repairing homes, and chopping wood. It’s tedious—as such tasks often are—but the smoothness of the motion combined with the sound design means that, while boring, the work is ultimately satisfying. It’s not enjoyable, but it feels good to perform it. If nothing else, the game is designed deliberately.

There are some problems with the PlayStation 4 port that did impede my enjoyment. Because so much of this game is about appreciating beauty, I noticed framerate drops more than I would in a more action-oriented game. So much time is spent waiting, existing, walking, that I noticed when turning too quickly caused screen drag or slow response. I wanted to appreciate the moments of nothingness—the moments that actually led to Walden, the moments when Thoreau was not a concentrated genius but rather just some bum in the woods—but kept getting distracted by the laggy response.

The same can be said about the music. Though initially enjoyable, there isn’t a lot of music in the game, so it does loop indefinitely. By my first hour, I was ready to scream—thankfully, it can be turned off and the game is much better for it. Without the soundtrack, you’re able to appreciate the game’s sound effects, which enrich the environments in both Concord and the wilderness of Walden Pond.

Neither the music nor the framerate issues were enough to ruin the experience, especially because Walden, a game is a student project intended in part for education, not for the fast-paced intensity of a game like Overwatch or even the quiet contemplation of Journey. In fact, there’s a detailed lesson plan available on the game’s website, giving educators plenty of resources if they’re interested in using the game to enrich a unit on Thoreau’s work. Even better, the site includes a suggestion for what to do if you’ve never played a 3D game before, including a description of how to use the WASD keys and how to think of the keys as your feet and the mouse as your eyes, something more games of this style could serve to emulate if they want to introduce new players to the medium’s potential.

Okay, but is it any good?

I don’t know. I enjoyed Walden, a game as a meditative experience, one that made me think about Thoreau’s work, his privilege, and the harmony of two seemingly disparate things. Thoreau lives a life between the world of civilization and wilderness. I played literature as a game, a game as literature. I treated it not as an exciting thrill-ride, not just mechanically, but narratively, as something to sip and savor, like a cup of tea enjoyed while looking out over the moors.

So I ask again, did it achieve its aims? Perhaps. Will I ever read Walden? Probably not. Maybe I don’t have to.