Review: A Moment in Marie’s Room 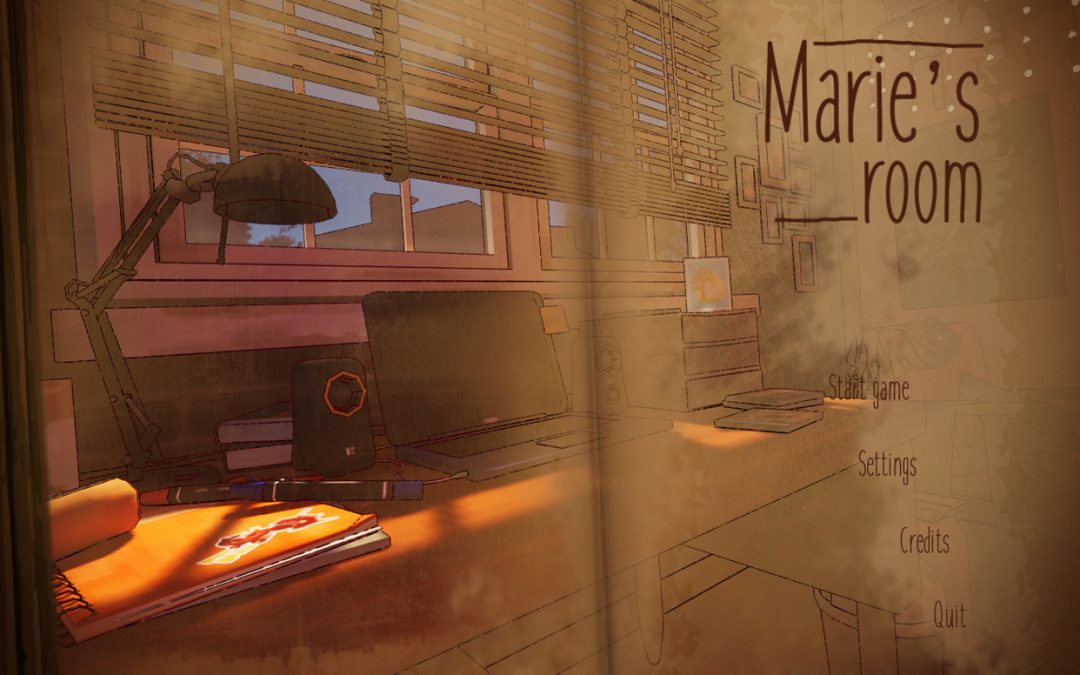 “It was supposed to be simple.”

Marie’s Room is a brief exploration game whose short story is revealed by uncovering memories and secrets through objects you investigate. Through a first-person perspective, you play the part of Kelsey, a woman recollecting what has caused the rift in her relationship with someone named Marie. You open up the game to find yourself in a small hallway in Marie’s old home. You can see some objects in this small space, providing an early indication as to who Kelsey is and what she wants: to get Marie’s journal. All of the doors are inaccessible but one—the one that leads into Marie’s room.

It looks empty, well past its prime. Wood furnishings appear aged, and chairs are all put up. With nothing else in the room, Marie’s journal is there for Kelsey to retrieve. Clicking on and inspecting the journal triggers a transition into a much earlier time: the room is now suddenly furnished, full of color and alive, and with more recent hints of Marie’s presence.

With the player literally reliving a memory, it is now apparent that there are blanks in Marie’s journal. As Kelsey, you are given the objective to figure out how to fill in these blanks to uncover the story between these two women.

When you look at an object, Kelsey makes a comment about its significance. Objects can also be rotated in a 3D space for further examination. The player has to find all significant objects in the room to move forward; they are the key to filling in more gaps to Kelsey’s memories and the blanks of Marie’s journal. Marie’s Room is more than what usually qualifies as a walking simulator. You have to be thorough in order to find everything Kelsey needs, including piecing together bits of information acquired from the objects to make sense of what to do next. People have already drawn connections between Marie’s Room and What Remains of Edith Finch, another exploration game that requires the player’s active presence in investigating the environment to move forward.

Overall, Marie’s Room is straightforward in what it hopes to examine: what defines friendships is never clear cut, and the unfortunate events that unfolded between Kelsey and Marie have made their relationship complex. Although the mystery between the two women remained compelling, the delivery sometimes did not match the height of the initial intrigue around the introduction of Marie’s journal. There were moments when the delivery of Kelsey’s lines made her character unclear, and some lines sounded more like the result of awkward writing than a projection of her personality. As minimal as Marie’s Room is, its conclusion also felt a little heavy-handed. It was jarring to suddenly be subjected to dialogue explaining the entire story in detail at the end of the game, when most of the experience up to that point was dependent on showing and not telling. The final sequence prioritized exposition over natural delivery, as if forgetting the game’s initial premise. Marie’s Room is a short game, but its story fits in the time it takes to play. Waypoint recently published a piece about the impact of video games’ lengths, zeroing in on the game Minit, which depends on exceptionally short gameplay loops. Video games should not have to rely on length for a guaranteed, quality experience. Some titles may be longer than necessary, forgetting to consider the player’s experience while prioritizing the narrative’s presentation itself. This is not a problem in Marie’s Room, where the player literally takes part in revealing the story, and the narrative is self-contained enough that it doesn’t need any further expansion.

Within its brevity, Marie’s Room was able to paint a captivating vignette of the sometimes painful recollections of adolescence. Lacking characters you interact with directly, the game takes a unique perspective and conveys angst and the nuances of human relationships through their possessions. Despite a few hiccups in storytelling, it should only take an hour to get the whole experience and complete Marie’s Room, and it is certainly an hour worth taking.