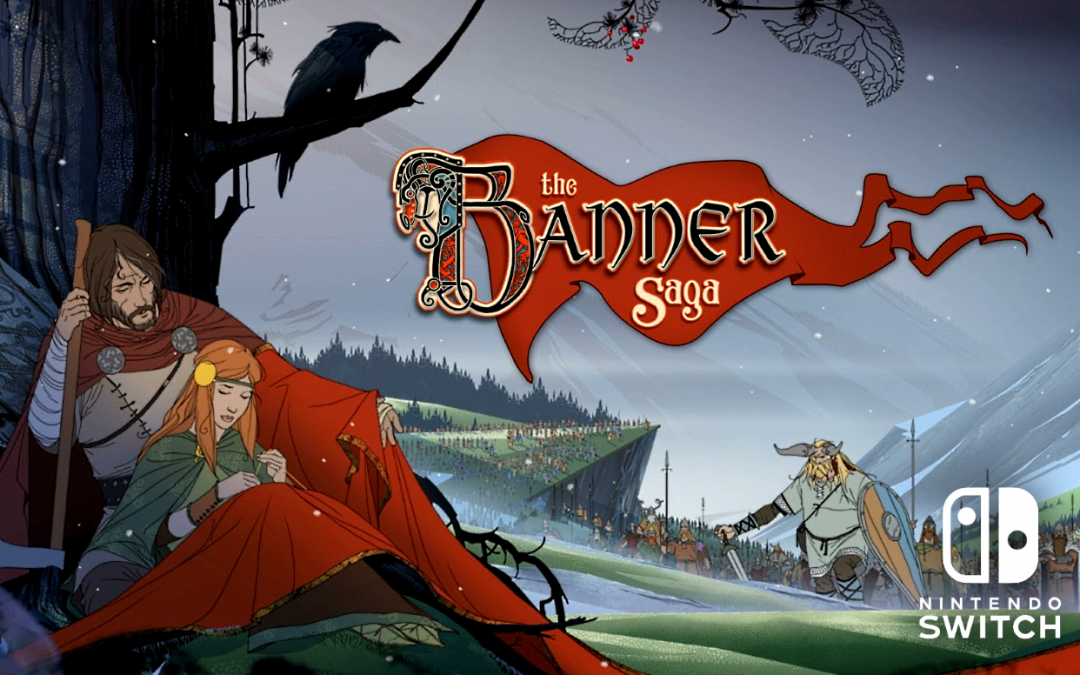 Sidequest was provided a copy of The Banner Saga for the Nintendo Switch in exchange for a fair and honest view.

I played Banner Saga when it originally came out for PC, but I never got that far in it—as much as I love turn-based strategy games, they don’t mesh with PCs for me. I’m a fidgety gamer—I move around, I pace, I bounce on the balls of my feet. Since PC gaming typically requires time spent immobile in a chair, and doubly so for strategy games, it’s the kind of thing I can only engage in sporadically, at best. I like turn-based strategy, though, a lot, so when I heard it was being ported to the extremely mobile Switch, I jumped at the chance to review it. I remembered my first attempt at a playthrough of Banner Saga being difficult, but I found this time that that’s not really the case—this isn’t like, say, XCOM, where the tiniest mistake could doom your whole party and force you to build up a new one. Banner Saga is a different kind of difficult; deaths aren’t permanent, or at least they’re not in combat. While traipsing the countryside, though, you might run into a mini-event that, say, sends your BEST FIGHTER hurtling off a cliff to their grisly end using nothing but text prompts with multiple choice answers. Ask me how I know about that one. Go on, ask.

The more I play it, the more I get the sense that Banner Saga is a game that really doesn’t seem like it should work, but manages to anyhow. Most turn-based strategy games, like Final Fantasy Tactics, the Front Mission series, XCOM, and even certain Fire Emblem entries, feature a kind of overmap where you’ll move quickly between important, marked nodes—towns or battlefields, what have you. The travel itself is streamlined, so that the focus is on the strategy part of the game, as you might expect. With Banner Saga, though, your part moves at a crawl—you can open a map to look, but the actual travel is automatic, on a side-scrolling plane. You can decide when to camp, but otherwise your party marches inexorably forward, toward the next goal. It’s not very interactive, and the first time, this seems like it might get old real fast. It doesn’t, though; one event happens after another and you realize—the long crawl between points is just as dangerous, if not more so, as any fight you’ll be in. Every choice you’re given reinforces the fact that lives are on the line, literally—I’ve lost two or three characters since the start of the game while just trying to do what was best for my caravan.

These battles, choices, and treks have an effect—your caravan’s morale will go up and down, and with it, your effectiveness as a team. You’ll meet other groups along the way, and be given the choice as to whether you should add them to your party—more numbers means better odds of surviving larger battles, but also more mouths to feed. Additionally, some of those other groups might not be so trustworthy—you could let them join only to find they’ve made off in the night with a day’s worth of supplies. These decisions all add up, and suddenly those treks are more stressful than the fights themselves; each leg of the trek builds suspense and an investment in your caravan. Where any other game would treat these spaces between fights as a distraction or a brief note to flit past, Banner Saga revels in the distance of the trek, reminds you with every step that it is long and treacherous. It’s masterfully balanced. Like I said, it shouldn’t work, but it really, really does. Combat is unique, too. A great majority of turn-based strategy games use a kind of initiative system that’s tied to individual characters’ speed in some way—the more fast or agile a character is, the more often that character will be able to attack. This has the added effect of causing a fight to become easier as enemies are defeated, as more of your characters will have a chance to go before the remainder of your enemy does—consider any time you’re down to one or two enemies on the field in, say, XCOM or Final Fantasy Tactics.

Banner Saga again veers off in the other direction here, though. Turns are split evenly between sides, with the order of your troops determined by the you, the player, prior to the battle’s start. That order only determines which of your fighters goes first, then second, and so on—but the actual flow of combat means that one of your characters goes, then one of the enemy’s, then one of yours. This actually can make fights more difficult as you defeat your enemy’s troops; suddenly those enemy turns, which always come right after one of yours, might mean that one enemy has multiple chances to attack—and potentially defeat—troops of yours before you can get another of your characters in range to finish them off. It sounds complicated in text, but it’s actually very intuitive to watch.

There’s also a system that resembles a kind of fatigue. Every character has a certain number of extra points—called Willpower—to spend on movement or damage in a given battle. You can still move or do damage without these points, but they’ll boost your abilities for a turn if you do use them. However, with the exception of certain equippable items or specific character abilities, they don’t generally replenish, which means that the sooner you use them, the sooner your characters are dealing unaugmented (and thus slightly weaker) attacks, and moving just a bit more slowly across the map. Leveling mechanics are tied to the renown of your entire party—it’s an actual currency within the game that you can spend, and is gained through the winning of battles, the completion of certain major story events, and the killing of enemies. The trick with it, though, is that you use the same currency to level up, to buy accessories for your active party, and supplies for your caravan—spend too much on one and you’re missing out on the others. Overspend on any and you can reach a choke point, where you have multiple characters ready to level up, but unable to do so, or the converse—a party of fully leveled fighters and no supplies for your starving caravan. The only items you can purchase are trinkets for your characters to equip; each of them provide some small bonus. Tying currency directly to leveling mechanics is certainly unique; I don’t recall seeing it prior to this. It’s funny, but I think if the currency had been a standard gold or what have you, I would’ve found it annoying; it would’ve seemed too much like buying levels in the worst sense. It’s a strange case where the wording and the imagery used (it’s the red banner in the upper right corner of the above picture) make it seem more palatable than it would otherwise be. But then, that’s sort of the point I’ve been getting at, isn’t it? It’s all more entertaining than it seems like it should be.

There is one area where the game’s delicate balances fall short however: representation. Banner Saga is based on Viking aesthetics and myths, and that shows in the presentation; the art style, the design, the landscape, all of it. That said, it’s ultimately a fantasy game, one that asks us to believe in shuffling monster-like creatures, giants, dead gods, and magic. All of those things are possible in the game, so why is it impossible to see a person of color? Why is it impossible, when the point-of-view character changes from chapter to chapter, for one of those characters to be a woman? There’s a very telling scene, in fact, where sexism is written into the game itself. You’re playing Rook (pictured hiding behind some trees with his daughter, several images above), and speaking to the wife of the Chieftain, a woman named Oddlief, who is a master archer. During this conversation, she opines on how she should be leading the caravan and the people in her injured husband’s stead, but she must instead rely on Rook to do it, because—you guessed it—he’s a man. Apparently, these fictional people will not accept a woman as their leader—this is too unrealistic a thing to be allowed. It’s a glaring fault in a game that otherwise takes so much care in its presentation; to reinforce the idea that women are some kind of lesser class is unbalanced, indeed.

Overall, Banner Saga is the kind of game I can really easily recommend, if what you’re looking for is a turn-based strategy with a strong sense of identity. Nearly everything it is carefully considered, and that translates into challenging, but rewarding gameplay. It’s just a shame that it’s so hard for so many of us to see ourselves in its characters. I haven’t played the sequel at all yet, but given that it’s also due out on the Switch soon, perhaps it will correct the missteps made here.