Finding a Friend in Tabikaeru 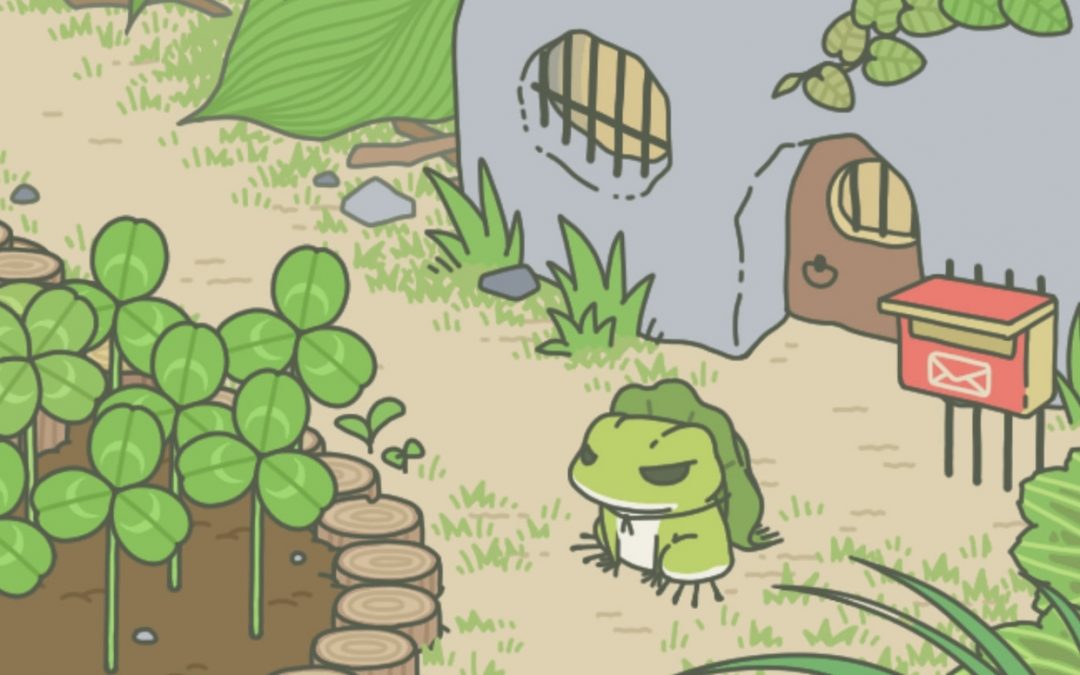 Tabikaeru—or “Journey Frog” in English—is the newest mobile game from Hit-Point, the creators of popular cat collector Neko Atsume. But even before I downloaded it, I suspected it would be more than just another phone game. Neko Atsume had been helpful for me, providing brief moments of refuge when my anxiety otherwise threatened to overwhelm me. “I just want to check my cats real fast,” was often my mantra, giving me an excuse to take out my phone for a few minutes and use that time to calm down, regroup. Journey Frog looked even quieter, even more meditative.

At first, I was hesitant to play it in its native Japanese, although that’s currently the only option. I was afraid that not being able to read the instructions would make me feel confused, anxious, like I wasn’t in control of the situation. I hoped it would be released in English soon.

But eventually I felt like I couldn’t wait anymore. I really wanted to meet that cute frog! I downloaded the game in Japanese, found a guide that explained the basic outline of the game and what the buttons did, and gave it a try. And even though I had been nervous about it, I soon found that I actually kind of liked playing in Japanese. There was something meditative about not being able to read the text. It kept me completely focused on the core of the game. One of the first things you have to do in the game is give your frog a name — and since they’re expecting it to be in kanji, you only get a precious five characters. For some reason, I panicked slightly and named my frog the first five letter word that popped into my head — Bread. Yes, my frog’s name is Bread. In fact, “Bread” is the only word in my game that’s not in kanji. And it sounds silly, but seeing just the word “Bread” among all the kanji brings a silly joy to my heart for some reason.

The premise of Tabikaeru is simple, and the pace is slow. As the player, your job is to make sure your amphibious friend is well prepared for all his travels. You pack his food and supplies for him. You watch his house while he’s away, check his mail, tend his garden, greet his visitors. In exchange, he sends you postcards depicting his adventures and brings you back treats and souvenirs from wherever he goes. Checking the game repeatedly doesn’t cause anything to happen and it’s not uncommon for an entire real time day to go by with nothing changing. Still, the slow pace is meditative in its own way. Even though I’m pretty sure nothing in the house is capable of changing, it’s relaxing to scan the image and make sure. The candles haven’t been lit, the little mushroom stairs are still growing healthy on the middle pole, the maps by his bed are undisturbed, nothing is out of place.

Bread moves at his own pace. Sometimes he’s home for long stretches, just reading and doing his daily stuff. Sometimes he’ll be out traveling for days and I won’t hear a word from him, but other times I’ll receive a rapid series of photos all in a row, like he’s so excited to share what he’s been up to with me. He quickly started to feel like his own person, with his own thoughts and his own motivations. I hadn’t been playing for very long when I started feeling real emotions associated with the game. Late in the evening, when I hadn’t heard from Bread in a day or two, I felt a twinge of worry—especially after I realized how small he was! He was my very small, sweet friend, alone in a world where everything is too big for him. During my lunch break at work, when I found a letter from him in the mailbox, I felt excited and faintly relieved. While I was reading in my library and saw that he was also taking a quiet moment to read, I felt a sense of synchronicity and contentment.

As I started to get a sense of Bread’s schedule and fall into a sort of routine, the feeling I settled on was longing. Not an intense longing bred from feelings of FOMO, but a quiet, happy longing where I spent time reminiscing on my happy backpacking memories. It felt a little like being homesick, but in a nice way. I think part of what makes Tabikaeru so appealing to me is that it captures what solo backpacking feels like in a very accurate way. Some days are travel days, cruising down a road that feels like it might go on forever. Some days are marked by quiet solitude, spending some precious time watching the horizon and being alone with one’s thoughts. Sometimes my frog’s photos tell a story. I’ll see him meet up with another small friend and the next few pictures will portray them seeing a few sights together before going their separate ways. It reminds me of friends I’ve met on my travels, shared a couple wonderful days with and then never saw again. I’ve described my experience playing the game as “meditative” a few times and this is what I mean by that. For a game to inspire me to reminisce on these brief but special friendships, to sit for a few moments and be present with my memories and emotions, is rare and beautiful. Once, I was having a really tough day and I saw that my frog was home. I felt suddenly worried about him. Life is very hard and he is only a small frog traveling on his own. He must face many hardships but he still perseveres. I took a look at his photos and saw that he had met a butterfly friend and they had visited a temple together. I felt proud of him—and then I felt proud of myself. We have both persevered through many hardships. Tabikaeru is a game that conjures up a sneaky number of feelings, but the trick to enjoying it is giving yourself space to feel those feelings, to sit with them, and to let them blossom into an appreciation for things small, simple and beautiful. Upon reflection, perhaps that is the trick to more than just the game.