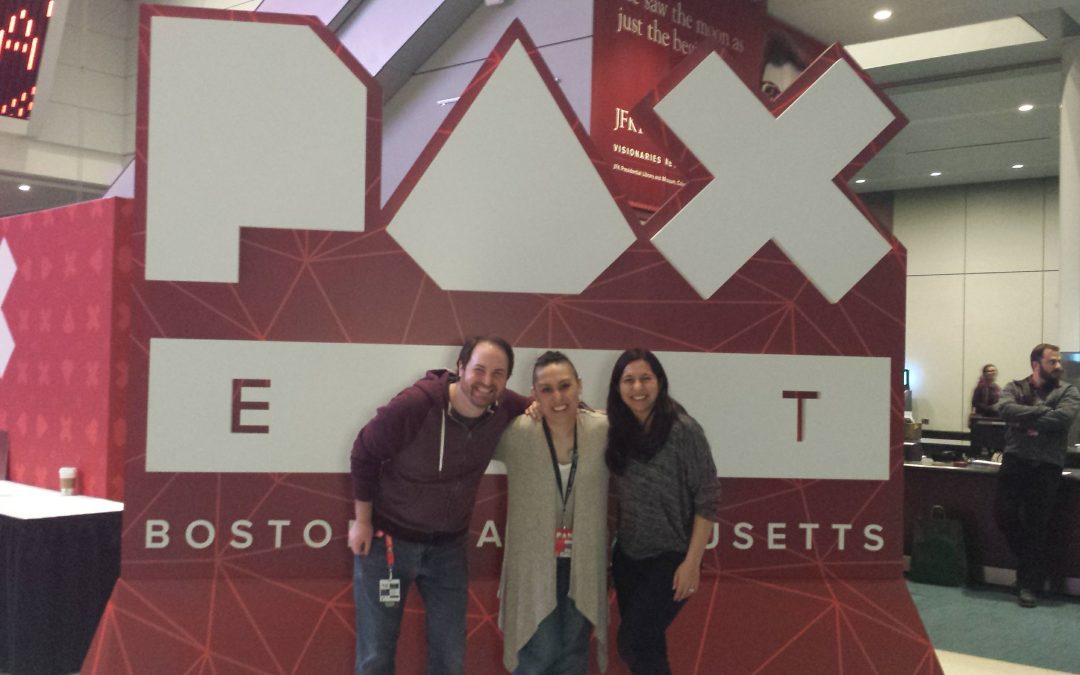 At PAX East this year, I was pleasantly surprised to the see the dedication to showcasing digital indie games. There was the Indie Showcase, the PAX Rising booth, and the PAX Roadshow – Australia section. This meant lots of indies for me to try and report back to you, fair reader!

Walking through the aisles, I was happy to see games with female protagonists and games made by female developers and people of color. Woohoo! These were easily identifiable and not tucked into random corners discoverable only by secret treasure map. PAX East has made public strides at inclusion, like the Diversity Lounge, but it’s good to see that commitment also reflected on the show floor.

I was also happy to see the digital indie trend moving away from constantly using pixelated art to using other techniques like digital painting. My guess is developers are becoming more experienced with engines like Unity, Unreal, and RPG Maker, paired with usability improvements in those tools. The downside is that the indie world is now full of 4-person co-ops and chock full o’ narrative games which have limited variety in the game mechanic.

I played so many indie games at PAX East, but two stood out from the pack: Qinoto* and Romu. Qinoto is a paper-folding puzzle game that challenges the player’s view of a fantasy-based world. Puzzles are solved by “folding” the scene on screen. In one set of puzzles, the screen is a crossword where the player folds the scene to have the letters line up to complete the solution word. The final puzzle however was folding the entire page to make the answer word using the spaces on the crossword.The paper-folding mechanic is what originally drew me to check out the game. Chatting with the game’s developer, Katie Huang, the inspiration for the game came from the puzzles in Mad magazine. I enjoyed the mechanic, as I expected, but what really struck me was the final puzzle in the demo. It made me rethink how I was interacting with the paper world, looking at space on the entire page. Although still in development, Qinoto is one to watch. (*In a strange coincidence, there was not only one, but two paper-folding puzzlers at PAX East, Qinoto and A Fold Apart. A Fold Apart uses a straightforward interpretation of a paper-folding puzzler. The player character is in a long-distance relationship, and the point of the game is to fold a two-sided paper in different ways in order to physically move the character along the journey to meet their other half.)

Completely different but just as unique is Rumu. You play as Rumu, a robot vacuum cleaner who has been rebooted by the household AI computer and has no memory of its own. Through interactions with the computer and unsanctioned exploration in the house, Rumu tries to discover its role as an appliance as well as what happened to the family. For a surprisingly simple-sounding concept, the game has more depth that I anticipated. Elegant white-room styled science fiction art is paired with stellar voice acting to provide tension and sadness that is palpable. Rumu was released in December 2017 on Steam. Who Run the World?

Girls! Seeing more games with young adult female protagonists makes my heart go squee. Three shoutouts go to Intergalactic Space Princess, Dream Compass, and Jenny LeClue. I wish I could wholeheartedly recommend them, but each one has dev quirks that need attention. Since they’re not yet out, I do recommend putting them on your watch list. Intergalactic Space Princess is an episodic misadventure that starts with a teenage girl’s quest to get milk. Izzy Gramp, one of the three-member female development team, explained they wanted to make a fun game targeted very specifically at 14-year-old girls. The ice cream flavor color scheme is fun without being juvenile but the narrative-heavy demo felt slow, since I wanted to get to the actual space princess part. As a sci-fi fan, I want to see more games with girls in space and this game has a fun premise. I’m hopeful that the development team can work through the pacing to tighten it up. The Dream Compass is a platformer with in-game collectible cards for power-ups, cut-away scenes for a narrative story, and most peculiarly, level bosses you defeat using what feels like a casino slot machine matching mechanic. Creator Mike Andrews has a background in the casino business, but the theme doesn’t quite mesh with the young adult focus. The character design and story are interesting and more detailed than many side scrolling games. I can see this turning into a fun introductory game for the middle grade set. Here’s hoping for a little more clarity before the game is released in 2019. Lastly, Jenny LeClue is a girl detective game that finally had its first playable demo. And it had a typewriter! Yippee! I feel like I’ve been following this game forever—well, the past three-and-a-half years, at least. The main character is Jenny, a brilliant young detective, whose mom has been accused of a murder in their small college town. Mografi, the developers, nailed the Nancy Drew noir vibe and the art as promised in the game’s initial Kickstarter. Currently, I’m frustrated by how long this has been in development. Fingers crossed it still makes it over the finish line.

A green pepper dog? An onion cat? Chaotic tomatoes?! I love quirky addictive mobile games, especially with cute characters, so Salad Hunt slipped right into my heart. A casual family-friendly arcade shooter game, players use forks and other tools to neutralize chaotic kitchen vegetables. The idea came to developer Telly Lee while in Hong Kong. He recalls there was lots of good meat, but every once in a while, he felt like he had to go out and hunt for a salad—so he teamed up with his brother to make it a game. The game has been released to the Apple and Google Play stores with a limited number of levels (but more in the works). I have a confession to make. I want to play Stardew Valley, I want to join in on friends’ conversations about how my farm is doing… but the art style just doesn’t do it for me. Nope, nada, not at all. Enter Verdant Skies. It’s a life simulation game with beautiful character art, a soothing color palette, and a light sci-fi colonist theme. Ahhh… The character cast is diverse and relationship options aren’t limited to the land of hetero. Verdant Skies was released in February on Steam. The $20 price tag seems a bit high, and it’s hard to get a real feel for a sim with only a short demo. If money’s tight, I suggest checking out more thorough playthroughs before buying. Overall, it was great to see more variety emerging in indie games at big conventions like PAX East. Indie games take years to develop, so having the opportunity to play them, chat about their developer’s overall vision, and see how they evolve over time is fun.

These aren’t all the games I tested out, but they are the ones that floated to the top of my list. Check out the games and let me know what you think in the comments!

Editor’s Note: A previous version of this piece mistakenly listed the city where Salad Hunt was conceived as Tokyo instead of Hong Kong.