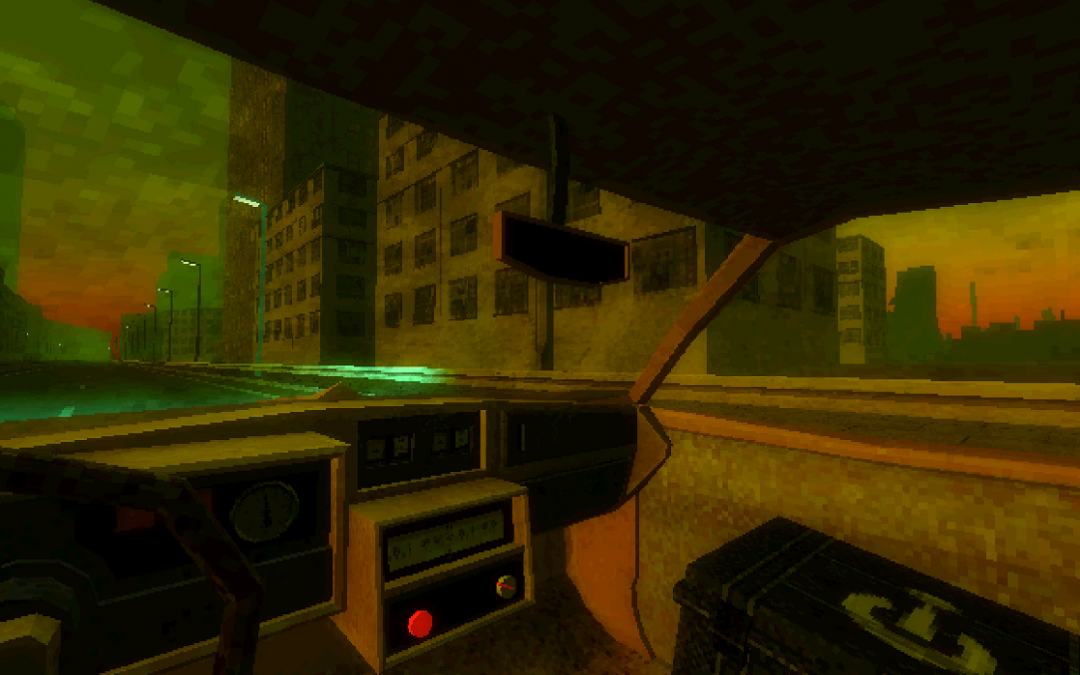 Jessica Harvey, Doc Burford, and Beau Chaotica’s Paratopic exists in hazy rooms and interrupted moments. By centering a trio of very simple characters alongside a mundane cast that gets caught up in something bigger than themselves, the game keeps its storytelling edge. The tightly-crafted adventure only clocks in at about 30 minutes, but prompts reexamination immediately after we see the credits roll. Only by stopping to consider our circumstances and playing the game again can we come out of the arresting experience with something to show for it.

Paratopic (available on ParatopicTeam’s itch.io page) presents three interconnected characters: a Smuggler forced into carrying illicit VHS tapes over the state line, an Assassin tasked with killing the distributor of said tapes, and a Birdwatcher who discovers the remains of a nefarious industry connected with the tapes while out to taking photographs in a forest. We control these characters in first-person and occupy them during their conversations. Each character introduces a different texture of play: we join Smuggler during his long stretches on the highway, while our only knowledge of Birdwatcher comes diegetically as we watch her camera film pips fill up with photographs of wild birds. Assassin wields the only gun in the game and it’s only fired once, despite a lengthy introduction where we manually chamber six bullets into the revolver’s cylinder. The gun’s weight is palpable.

Paratopic is a surreal adventure that balances immediately unsettling moments with a general, slowly creeping malaise. The game lets you steep in the mundane experience of fairly normal people. Sure, Assassin is a killer, but it seems to just be a job like any other for her. It’s a rare game that manages to simultaneously drift along while remaining razor sharp. That’s Paratopic.

The game’s setting feels right out of Samuel Delany’s Dhalgren; it’s an autumnal America, in decline, updated for our strangling neoliberal status quo. The cities are littered with skyscrapers like giant tombstones for capital. Moving through the country reveals remains of threshers and grain silos looming like giant rusted cages. A landlord is extremely cruel to one of his disabled tenants. On the street, people lie dead, their corpses eaten by crows. All of this happens and no one bats an eye. People still just live out their lives, getting by however they can amidst exploitation.

Paratopic uses a graphic style reminiscent of old PlayStation 1 games to great effect. In an old diner, the textures seem grimy and uncomfortable, but as we traverse a verdant forest, the palette blooms into greens, oranges, and reds, interspersed with the shadow of a windmill cutting into the sunlight. In this lonely game, our interactions with other people occupy a liminal space where the conversations can quench the sparse landscape while also wrenching the camera away from us, forcing us to submit to people with realistic face textures stretched uncomfortably across their models. Everyone speaks in an almost-language made from the sounds of words chopped up and spit through a garden hose. It is the worst. Paratopic is a horror game backgrounded by the familiar. It works in spaces that don’t produce much anxiety or dread on their own, but the game displaces our understanding of time and space through masterful slam cuts. We might be waiting diligently for an elevator to arrive, just stewing in our expectations for what will come down with it, when we immediately get transported to our upstairs destination after stepping into the elevator itself. Or, we’ll be driving for literal minutes on the highway with only a two-channel radio to occupy ourselves, then end up right in a dreary gas station convenience store. This produces a whiplash effect that unseats our emotions the more we prepare for the future. Alongside the slam cuts that shift between playable characters, much like Dhalgren’s setting of Bellona, Paratopic manages to create a video game multistable perception phenomenon. Even as we begin to piece together all the character and time jumps, the narrative folds in on itself, creating a kind of recursive Moebius Strip. It’s those characters whose lives we brush up against that keep the entire experience grounded.

As I played Paratopic, I couldn’t help but compare these characters’ relationships to the ecosystem presented in Shane Carruth’s 2013 film Upstream Color.

In Upstream Color, two people find solidarity in their shared exploitation when a thief uses a special drug to induce a hyper-suggestive hypnosis. Over the course of the movie, we learn that the thief’s special compound exists as part of a three-tiered ecosystem. The thief drugs his victims and cleans out their bank accounts through hypnotic suggestion; the compound then gestates into a parasite. Later, a sampler uses an infrasonic lure to draw the hosts so he can transfer each of their parasites into young pigs; finally, the infected pigs gives birth to piglets, which the sampler drowns in a river, their decaying bodies letting off a blue substance that travels downstream and sprouts blue orchids, which are harvested by a farmer and sold in the thief’s neighborhood. The thief buys the orchids and uses them to create the mysterious drug. The thief, the sampler, and the farmer are all culpable in their own way. If any part of the chain was broken, the exploitation would stop. Unfortunately, because of their lack of empathy, or just unwillingness to look past themselves, the cycle continues.

It’s a rare game that manages to simultaneously drift along while remaining razor sharp. That’s Paratopic.

Paratopic’s player characters exist in a similar arrangement, with each of their lives and motives intertwining. Despite facing shadowy conspiracies, creepy overseers, and VHS tapes that seem to gesture at “experiencing death,” we can hold onto these three simple characters as our anchors to the world. We can imagine them ending up with entirely different fates, if only the circumstances were just slightly different.

Near the middle of the game, Smuggler speaks with a gas station attendant. The curious man steers the conversation towards a book about extraterrestrial life. “[Aliens] must be better than us,” he states matter-of-factly. If you choose to pursue this line, he remarks that aliens don’t divide loyalties amongst each other. They all work together to better their entire species. Simply put, they have empathy, something “very few humans do.” He’s probably just reading some silly pulp pseudoscience piece and we should totally ignore him, but Smuggler’s dialogue choices take him at face value, cheeky as he may be, and with the juxtaposition of Paratopic’s experiences fresh in our mind, the attendant’s words leave a lasting impression. Paratopic’s last section has us in the past, inhabiting Assassin as she runs through the same forest we guided Birdwatcher through. We’re on high alert: our last moment with Birdwatcher had us attacked by an unknown figure. As we retrace her steps, the slam cuts accelerate, sending us screaming towards a showdown. Assassin is strapped and we’re ready to blow. But we arrive, and there’s nothing at all to fight.

It’s just Birdwatcher’s dead body, strewn up and flayed. Assassin is only here to take Birdwatcher’s camera, to keep evidence safe. But she does something unexpected: she calls 911 to report where the body is. Assassin doesn’t reveal her identity and leaves the scene with the camera immediately after, but it’s undeniable that she does something completely unnecessary.

Is it empathetic if Assassin is doing it for the sake of a dead person? I’m not entirely sure. In Paratopic’s final moments after the credits roll, we look out from the exact perspective of Birdwatcher’s dead body. An observation camera activates and slowly cranes over to capture the moment and wholeness of her death; the image then cuts out and the sound of a VHS tape being removed echoes, headed to who knows where. Paratopic’s nefarious cycle will continue, with or without Smuggler and Birdwatcher’s involvement. We’re left wondering, though, if Assassin will do the same thing next time. Maybe it won’t continue. Maybe it can’t.