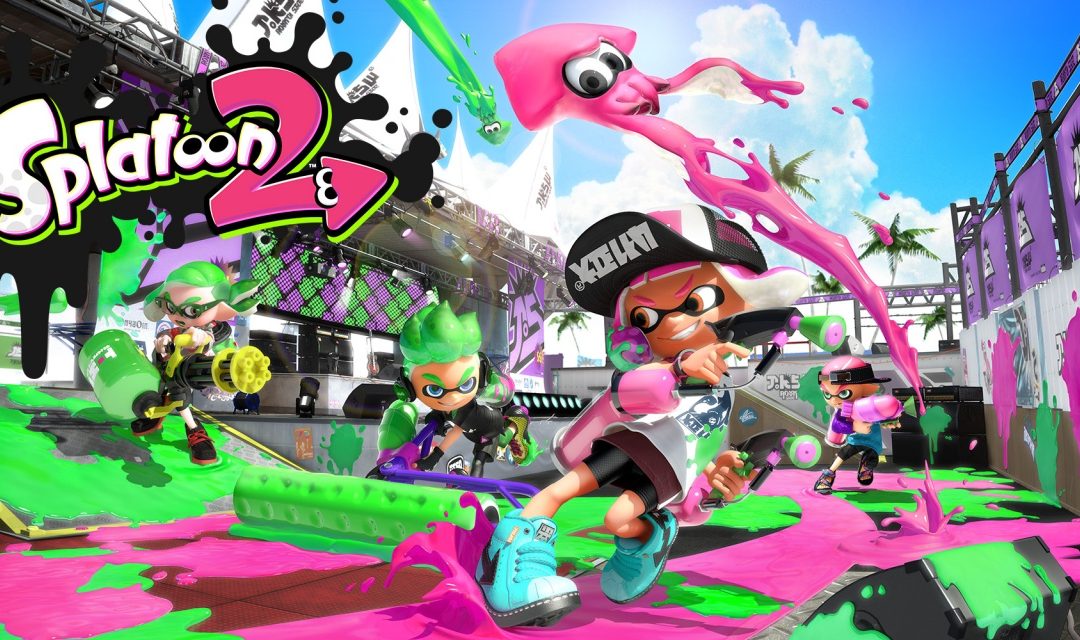 Splatoon is instantly recognizable for its bright colors, cheerful music, and attitude-filled mascots, the inklings. But it’s also known for something else—a community that’s unusually diverse and accepting for a competitive shooter.

Just a month after its release in 2017, Splatoon 2’s Inkopolis, the hub world in which players can showcase their thoughts and artwork as well as test out gear, was filled with trans positivity posts. When I tweeted asking for non-binary folks and women active in the community, I found a flood of people who were eager to talk about their favorite game and what makes the community so great, with only one or two people popping in to be snarky. It’s more or less accepted that Splatoon’s community is friendlier to marginalized people than your average game of its kind, but why? Splatoon, like many Nintendo titles, is often associated with a more “casual” demographic than competitive shooters like PlayerUnknown’s Battlegrounds or even Overwatch. Though its definition of competitive is much the same—there are casual Splatoon fans as well as those who participate in tournaments, whether online or locally, which earns them the “competitive” modifier—the perception is quite different. Its bright colors and unique playstyle (players shoot each other with ink, not bullets, and the most common mode of play is based on painting as much of the level with your team’s ink color rather than racking up kills) set it apart from other games in the shooter genre. Because its only available for the Nintendo Switch, these features have lead to the perception that it’s a “kid’s game” that’s not interesting to the usual hardcore demographic, regardless of its unique spin on the genre.

While some have supposed that it’s precisely those colors and less aggressive machismo that draw different demographics to the game, others suggest it has more to do with the game’s original fanbase.

“[T]he competitive community was originally smaller and typically had a demographic entirely of college level players,” said a player named Flarablitz via Twitter DM, “which made it seem more [accessible] than a normal ‘esport.’ I think the whole issue with women/nb people enjoying more colorful and optimistic games was not much to play here, as the issue for demographics entering esports is more avoiding … bias among the typical audience rather than the actual type of game they’re playing.”

As Farablitz pointed out, if Splatoon’s bright and cheerful atmosphere were the reason behind its diverse play base, competitive Super Smash Bros. might be known for the same. But as The New Meta and Super Smash Sisters co-founder Lilian Chen discussed in her TED Talk, that’s simply not the case.

Though Splatoon has a reputation for being popular among more unconventional competitive players, it goes deeper than that. The Splatoon competitive scene has always been full of non-binary people and women, who often aren’t as welcome in other communities. With a foundation like that, it makes sense that the Splatoon scene itself is friendlier to those often pushed to the margins—they’ve always been there, and so they continue to welcome new folks into the sphere.

But it’s more than that, too. Splatoon is notoriously simple and appealing to pick up and play, though that doesn’t mean it doesn’t take skill. A good team needs those with sharp aiming skills as well as those who can cover the battlefield with paint, two very different roles with equal importance.

“A lot of young female or LGBT artists especially have flocked to this game (like me!) because we’re all drawn to the cuteness and bright colours and the fact that honestly since the game is so unique it’s not hard to be good at it,” said Luci, another competitive player, via Twitter. “Even if you haven’t got good aim, you can contribute by painting turf and it makes it very accessible, in my opinion.”

That’s part of what makes Splatoon so charming. In addition to all the positive aesthetics, it’s not hard to have a good time. Though you may not win every match and there is a learning curve, anybody can find a way to contribute thanks to the game requiring teamwork, strong shooters, and players to cover the ground with paint.

“Even if you haven’t got good aim, you can contribute by painting turf and it makes it very accessible, in my opinion.”

But despite its friendly atmosphere and radically inclusive community, Splatoon 2’s competitive scene still has a lot of room to grow. Almost a year out from release, the game struggles to keep up with the competitive scenes of games like Overwatch, now in the third stage of its Overwatch League tournament. When I first spoke to Splatoon 2 players several months ago, multiple people mentioned that viewership was low—as of writing this, just 525 people were watching the game on Twitch. Some of this is no doubt due to the fact that Nintendo Switch games are more difficult to stream due to a lack of native Twitch support, but the fact remains that viewership is low.

“We’re still a pretty young community with only our passion for the game keeping us from flopping, honestly,” says Luci. “There’s hardly any money in the scene, all of it is from our own pockets and we only really have one ‘big’ streamer.”

Hunty, another Splatoon 2 player, agreed, saying via Twitter DM that the community is small and struggles to grow. Few teams have sponsorships, as compared to teams in other games, and there are few widely-publicized tournaments. Everything, aside from tournaments like the upcoming Splatoon 2 World Championship at E3, is grassroots organized. The community truly belongs to the community, for better and for worse.

Without the big money backing and constantly evolving meta of a game like Overwatch, which has a similarly vibrant player demographic despite its overwhelmingly male pro scene, Splatoon doesn’t really have a lot of fanfare other than its passionate players. As professional streamers and players gravitate to the games that are going to get them more subscribers, and thus financial support, Splatoon sometimes feels as though it’s being left behind despite its radical inclusivity and mechanically interesting gameplay, both of which seem like underused marketing opportunities for Nintendo.

“We’re still a pretty young community with only our passion for the game keeping us from flopping, honestly.”

But mainstream attention and funding aren’t the only places where Splatoon struggles to find a foothold. Though certainly a popular title, Splatoon’s evolution, both in terms of the gameplay adjustments and its community growth, hasn’t been widely publicized. Its tournaments are small, often local affairs, which is great for the latency issues that sometimes plague the game’s peer-to-peer network connections. But there’s a downside, too—Splatoon is more popular in Japan than anywhere else, so local tournaments are difficult to arrange. The community is split between continents with no in-game remote voice chat, making it challenging to work as a team unless you’re grouped up via the Nintendo mobile app. Though Nintendo has gotten more involved in tournaments, player concerns about the online P2P network haven’t been addressed, even a year out from release. It seems as though the game’s evolution—despite patches and evolving meta—has stagnated.

Finding a regular competitive team is just as difficult as finding tournaments, and is even more important in growing as a player. While players of the first game often congregated on Squidboards, a Splatoon forum and news site, much of the serious competitive action has moved to private Discord servers.

“I feel like to really get into the competitive scene you have to already know someone in the community so you can get in good Discords,” says Hunty.

Joy, also known as BlueTakenoko, agrees. “Reaching out to people / advertising / finding new or interested players is one of the competitive scene’s weaknesses,” she says, citing her own experience with joining the first game’s community as an example. It’s easy to be lonely when you don’t know where everybody’s hanging out, and finding those spaces, especially when they’re on private Discords, is a challenge.

“It has become a somewhat toxic hierarchy,”

Many of the players I spoke with cited community leadership as an area where the Splatoon 2 community could improve. Though much of the player base is on the younger side (as with many competitive scenes), many of the leaders are older adults, which sets up something of an imbalance.

“It has become a somewhat toxic hierarchy,” said Cherubic Cherry, another player, via Twitter DM. “The older people have more travel and stream freedom. They also have that subconscious respect just by being older. Then the younger kids of course look up to the others… They love the ‘leaders’ because of their skill and popularity and then become loyal followers. This inflates the leader’s egos and leads to a lot of drama and infighting.”

While that’s not true across the board (another player, named Rose, says, “A lot of top players are willing to give newcomers advice on their gear, play, etc. in many of the Discord servers dedicated to competitive Splatoon.”), it does seem that steps need to be made to equalize the community. “I think we just need better leaders in the community to push it forward, as a lot of them aren’t very good role models as of now,” Rose adds.

Arguments over meta and progression, as well as the insular nature of small communities, have also contributed to tension that might turn some new players off from joining and keep veteran players from reaching out to new folks. Though hardly unusual for competitive gaming, these problems, however small they might be, can make things tough for players both inside the community and those who want to be part of it.

“I think it’s important for people to know that just because you don’t compete in tourneys regularly, it doesn’t mean you’re not a part of the community.”

But Splatoon 2 players have hope. Their small, passionate community is still pushing for changes to the game to better accommodate varied playstyles and sponsoring and hosting more local tournaments, especially for newcomers. And though it might be challenging, players are eager to welcome new people into the fold.

“I think it’s important for people to know that just because you don’t compete in tourneys regularly, it doesn’t mean you’re not a part of the community,” says Joy. “For Splatoon to grow as an esport, the most important people are the ones that watch matches, are interested in the game and keep coming back to the game… to become big in esports we need to get and keep viewers / casual players. The numbers are what brings the esports companies.”

Though they might be struggling to find those numbers in light of the changing community, players are optimistic.

“As long as people love it, the game will survive,” says Luci.

With the excitement over Inklings joining the next Smash roster, the upcoming E3 tournament, and the ongoing grassroots efforts to promote the game, the Splatoon community has a lot of love to give. And, if Luci’s right, that love will carry it forward.