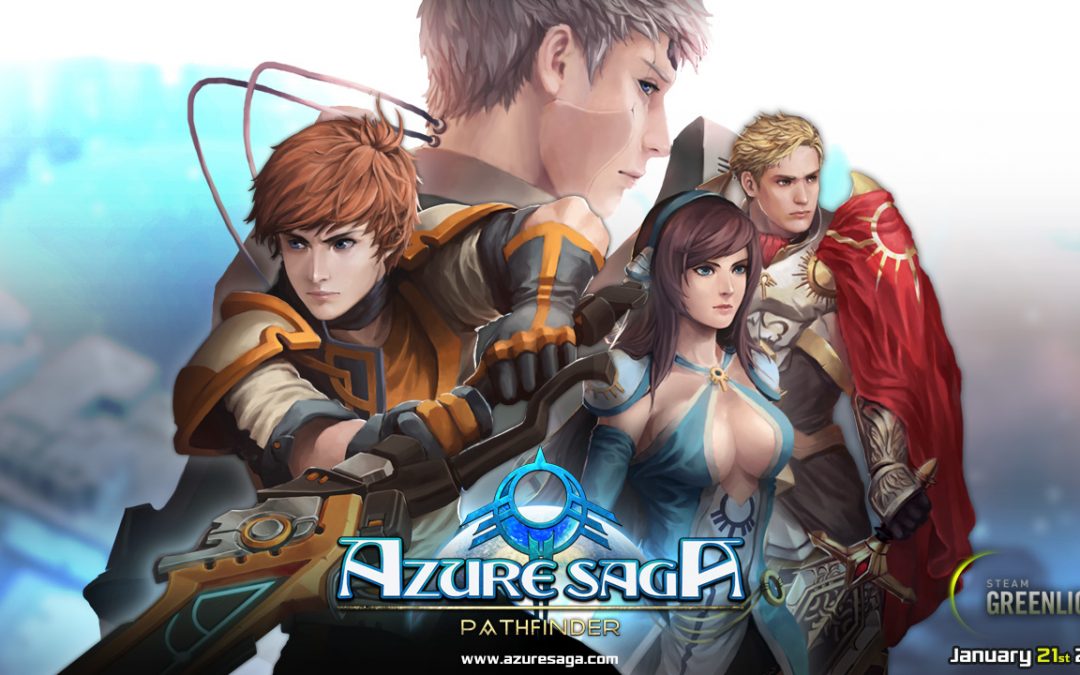 Sidequest was provided with a copy of Azure Saga: Pathfinder for PC in exchange for a fair and honest review.

I love RPGs. They’re by far my favorite type of game, especially when they have that mysterious “Japanese” in front of them. When Azure Saga: Pathfinder came across my inbox, hailing its immersive world and classic “old school” feel, I had to try it.

Let’s not bury the lede, here: I was deeply disappointed in this game.

I wish I could give a summary of what the game is about, but after only a couple hours of gameplay, I still don’t understand it. The story begins with the main character, Synch, flying in a spaceship with his android, Noide. The ship crashes on an unknown planet, and they apparently are transported to a world in the past, where magic, rather than technology, is the focus and power. They’re trying to get home, but beyond that, I don’t know what the story is.

Sidequest editor-in-chief Melissa Brinks phrased it well, albeit for a different game: Azure Saga is so busy trying to fulfill tropes that any originality is lost. I wonder if they went that route in an attempt to fit into a market over saturated with mediocre games, or to draw a basis of comparison—the “Oh, this is like that one character in the other game!” that helps gamers fall into a new game. If that’s what they were going for, they could have subverted those tropes just as easily as presenting them, thereby giving people what they already like and doing something new.

Part of what appealed to me originally was the artwork; it’s stunning, pulling from classics like Final Fantasy. But it also leans heavily into classics in ways I wish it wouldn’t. Clary, the first female character you’re introduced to, has the classic combinations of large breasts and skimpy clothes. That in and of itself was an immediate turn-off for me; in a game that the developers clearly put enough time into making lovely art, why did they rely on this trope, especially for a high priestess?

And the sexism doesn’t end there; in that first introduction—about ten minutes into gameplay—the main character, Synch, basically tells Clary to “calm down, woman.” Seriously? Calling someone you’ve never met “woman”? Telling her to calm down when she’s run into randos who are powerful enough to take out a monster her people fear? It doesn’t matter that the game is set in an alternate universe. We’re here in the year of Our Lord 2018, and the writers are in our world, not theirs. And later, Synch calls himself her “savior,” because he and Noide helped in that first battle. What is with this condescending white knight? I’ve never liked this trope, and I still don’t like it.

WHAT, ARE YOU KIDDING ME RIGHT NOW.

For a game hanging its hat on “gripping combat,” I found it uninspired. There were physical, ranged, and magical attacks, but I don’t know what each made each unique for each character. You did receive more magical attacks as the character leveled up, and it’s possible that they became more interesting the more you unlocked. The most interesting aspect was the Unity Attacks, where your three on-screen characters combine specific individual special/magical skills, which is similar to the triple attacks in Chrono Trigger, but it lacked the spatial element that made the battles in Chrono Trigger so unique.

Though the battles picked up as the game progressed, they all had one underlying feature: they were too easy. Maybe this wouldn’t have been a huge deterrent for me if I liked other aspects of the game. There are plenty of battles in Persona 5 that are easy because you’re familiar with the enemy you’re dealing with, and thus their weaknesses, for instance. But in Persona 5, there is a lot of strategy that goes on in even easy battles, something that I felt was lacking here. I also never fully understood how the strengths and weaknesses worked in Azure Saga; they seem tied to the type of monster that attacked you, but the corresponding attack that used that type of weakness was unclear. Was Synch’s one attack, labeled as strong against hollows, indicative of a type of attack that hollows are weak against, or were they just weak to it just because? Understanding the intricacies of the battle mechanics can make or break an RPG for me. Perhaps, as you delve deeper into the game, it becomes clearer and therefore more interesting, but there should be hints of that at the beginning of the game, too.

To be clear, the combat system didn’t work for me; I didn’t actually enjoy the battles. I found myself using the “auto” feature just to get them over with, especially in the first hour or so of gameplay. I think part of why I wanted to skip the tedium is that the battles happened so frequently due to the random feature, and maybe it’s just me, but I hate that. Whenever I play Pokémon, I use as many repels as I can to avoid the battles when I’m just exploring. In the same way, the battles in Azure Saga prevented me from figuring out what the story even was; I was perpetually slowed down. If they were more of a challenge, then I might not have minded, but because they were so simple and seemed to lack strategy, it literally felt like wasting time.

I wanted to play this game a little longer to see if the story had the “memorable characters” and “intergalactic plot” it promised, but I was so fed up with the random battles that stopped me from progressing that I quit playing. To be fair, I can’t think of a single random battle game that I particularly like, besides Pokémon, and I don’t like Pokémon for the battles in the wild. Pokémon gives me the ability to avoid the battles, either by not walking in the tall grass or using repels, whereas—at least in the first few hours—there was no-such ability in Azure Saga. I hate to be so hung up on this aspect of the game, but it really was what made me put it down. If there was an option to avoid the battles, either through the use of an item or by having the enemies walking around on-screen (thus no longer making them random), I would have stuck around to see how the plot would go on.

And the few things I liked—the art, the music, and even the scanning feature of the battle system, which detects an enemy’s weakness or abilities—were shrouded by everything I didn’t. The overworld, at least in the beginning, is pointless, just an excuse for the random battles I’ve already derided. The dialogue is incredibly stilted; the developers, MassHive, are Indonesian, but that seems a poor excuse for bad writing. I hate when a game lets you click on something just to give you useless dialogue—yes, there are a lot of utensils here, Synch, because you’re in a goddamn kitchen. Unless you’re Leon Kennedy remarking on books, I’m not interested in what you have to say. This isn’t a criticism that’s unique to Azure Saga, though; Chrono Trigger does this, too. But what Chrono Trigger and Resident Evil 4 do well that lets them excuse this waste of a click is showcase clever or funny writing in those moments. (Admittedly, Resident Evil 4’s hilarity might have to do with a bad translation rather than intentional humor.) Maybe this feature is a holdover from adventure games, and I don’t mind it when games borrow from those outside their genre, but in a game that already missed the mark on so many things, this was just another to add to that.

I hate to disparage anything someone has spent time on, and it’s clear there was a lot of time put into this game. The visuals are beautiful, and I thought the music was spot-on. But the truth is, if you’ve played any JRPG, you’ve already played a better version of Azure Saga: Pathfinder.