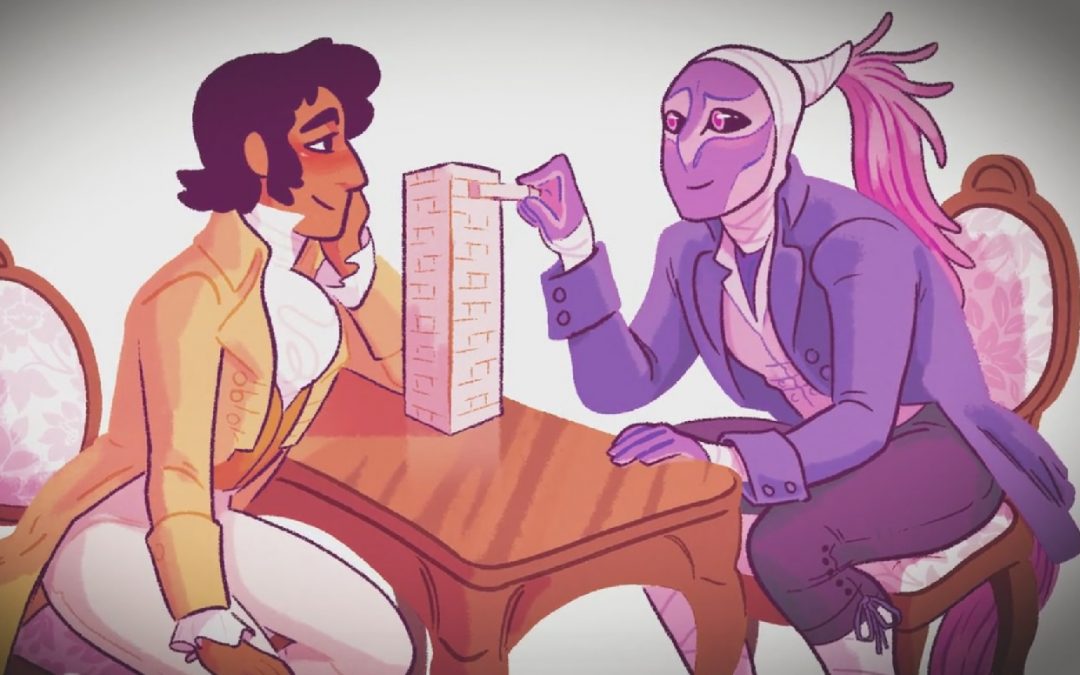 Having spent unrepentantly large portions of my life shipping fictional characters (from Sherlock Holmes and Irene Adler to Dr. Bashir and Garak), I was intrigued to learn about Star Crossed. This tabletop roleplaying game (RPG) is written and designed by Alex Roberts, who has contributed to other tabletop RPGs such as Misspent Youth, Dialect, and Damn the Man, Save the Music!. She is also the podcast host of Backstory, as well as the Project Coordinator for Bully Pulpit Games, who have teamed up with her to publish Star Crossed.

Star Crossed is a two-player tabletop RPG where you and a partner/friend/total stranger can act out a story of two people who really want to, but really, really shouldn’t. It launched on Kickstarter on 10 April 2018 with a $7,500 USD goal. As of the time of writing, the total raised so far is $39,060 USD.

An interesting feature is the use of a wooden block tower (AKA Jenga) as a part of the game’s mechanics. This choice was inspired by Dread, one of the most famous horror tabletop RPG hits of recent years. As your characters deal with their feelings, and the very good reasons they can’t act on them, each player will pull blocks from the tower the more the attraction grows, earning points. These determine whether your love is “doomed, triumphant, or something-in-between.”

That last element intrigued me most as, through this, Star Crossed is up front about its difference to shipping: while shipping involves creating romantic narratives using art, fanfiction and discourse, Star Crossed says that your characters’ relationship is an almost impossible one, and y’know what? It may be for the best that they don’t end up together (I’m looking at you, Reylo).

In interviewing Roberts, I wanted to find out more about how a game inspired by a famous and lauded horror RPG came to focus on building relationships and tender moments between two potentially ill-fated lovers.

First off all, congratulations on reaching your goal within hours! Did you have any sense before you launched that the campaign would hit its goal this quickly?

One of the benefits of doing this with Bully Pulpit Games is that we could compare to previous projects when setting up budgets and projections for how things might go. It was logical to assume we would reach our goal. I had a wealth of data to refer to. But to answer your question, no. We are already over the highest amount I thought we would get and we’re only halfway through the campaign! The whole first day was a blur. At some point I got up to reheat some soup and when I sat down I saw a tweet from a backer saying we’d reached our funding goal in 1 hour and 38 minutes. I had no idea how to react. I quietly ate the soup.

You’ve been involved as a contributing writer to Kickstarter games before, such as Misspent Youth. Did you find your previous experience prepared you for what to expect when helming your own game on Kickstarter?

Absolutely. For one thing, I know how long the people running the Kickstarters contacted me in advance! And I saw how much extra work they did after the campaign—it results in extremely good stuff, and I especially appreciate employing multiple contributors to give a game a more diverse chorus of voices (shout out to Misspent Youth) but I knew with absolute certainty that I would not have the energy to make something like that a part of Star Crossed. If there’s ever a second edition, it’ll be when I’m experienced enough to flawlessly assemble an anthology of companion fiction and setting prompts. I will be a silver haired project management demi-goddess by then.

Star Crossed uses Jenga during gameplay, a mechanic employed in Dread. What is it about this element that appealed so much when designing your game?

Dread was one of the first RPGs I fell in love with. I was so compelled by how strongly I felt —actually felt, in my real heart—when I pulled from the tower! Right away I wanted to make people feel that strongly, and love seemed a likely replacement for fear. It just took a couple years before I considered myself capable of making something that could do that. A lot of people encouraged me.

Besides Dread, are there any other games that inspired you when creating Star Crossed?

So many! From the character sheets, you can tell I’ve been playing nothing but one shot scenario LARPs; they just ask you what’s important about you, and give you a few suggestions for what to do.

From tabletop, my biggest inspiration is an Avery Alder game called A Place to Fuck Each Other. Reading it, I’m just amazed, and energized, by how she captures the experience of queer women trying to make space for their lives and relationships in a world not made for them. There’s a mix of desire and frustration and hope that, honestly, when working on a game like Star Crossed it was just good to know something like that was possible.

Like all designers making games about the human heart, I stand on Emily Care Boss’ shoulders. I ought to sleep with The Romance Trilogy under my pillow at night. And of course you can see shards of other games like Kagematsu, Hot Guys Making Out, and the brilliant two-player game 183 Days.

You’ve been playtesting this game with friends and strangers for over a year. Are there any pairs that you expected would come up straight away that you’re surprised haven’t? Any pairings you’ve been pleasantly surprised by?

Almost every pair has surprised me. I once told a pair of playtesters, “There are relationships you absolutely wouldn’t want to do, like therapist and patient, for example.” And they played that exact pairing. And it was pleasant in the end because they handled the content very well, and it was a restrained, realistic take on truly impossible attraction. I was surprised the first time someone made fanfiction. Vampire and Werewolf took longer to happen than I expected, but it’s well-trod ground by now. Honestly, every time two people sit down—even when I sit down with someone—I have legitimately no idea where things are going to go.

Star Crossed used to be called Tension. What was the rationale for the name change?

Tension is a feeling. Star Crossed describes a relationship. You’ll have feelings playing this game, but what’s more important to me is that you embody a compelling relationship. Also I get to have a pretty star in the logo. You mentioned in an interview for the War Rocket Ajax podcast that the game is for 2 players “at this time.” Does this mean you would consider adapting the game for a larger group of players? Is that possible?

That hack is the most common request I get about the game, even before adapting it for online play. I think a three player game would be awesome; it’s a different dynamic that’s even more precarious than a dyad, and you open up all kinds of new answers to “What is keeping us apart?” Four players would also be different, in a good way. I can’t wrap my head around more than that. I’ll go ahead and declare it impossible. (That’s the best way to ensure someone makes it.)

During your interview on the Curiosity in Focus podcast, you said that Star Crossed is also a game about experiencing discomfort in order to help people make more skilled decisions. How fundamental is it, to you, for an RPG to help build these kinds of insights?

Not every work of art has to teach. Let’s not fall into the trap of trying to legitimize our art form by saying it educates, it changes society, or whatever.

Not every work of art has to teach. Let’s not fall into the trap of trying to legitimize our art form by saying it educates, it changes society, or whatever. Play is good. Play for play’s sake, when you can. Bringing about play is my primary concern with Star Crossed. However, I do want to see more people sit with discomfort. Figure out if it’s good discomfort (I’m going through an important but difficult change!) or bad discomfort (I am feeling the first intuitive response to what is now or may become a dangerous situation!) This game can elicit both. It can even make discomfort fun! So many white people don’t want to acknowledge anything to do with race because it makes them uncomfortable. We see cis people expressing their discomfort with the mere existence of trans people all the time. But sometimes a person or a situation is giving you an unsettling feeling for a good reason. No matter what it is, I want people to just tune in. “What kind of discomfort is this?” “Where might it be coming from?” “Do I actually have to do anything about it?” I can’t claim my game elicits any of these desired behaviours, but games make statements and this is one of mine.

Jason Morningstar said Bully Pulpit were excited to get involved, partly because they loved seeing a game that “focused on something other than violence“. How much do you think the RPG industry is changing in line with this desire?

At a rapid pace. It’s beautiful, like watching a time lapse video of a flower blooming. Players have always wanted to do things things differently; design just had to catch up. Remember the player who tried to trick the troll with a riddle, or sing him to sleep, or befriend him, or seduce him? We could always imagine beyond violence, but our systems grew out of war games, so that’s where our mechanics came from, and everything else remained in the background. As the tools of creation and the methods of getting your work in front of other people become more accessible, more people make games. And they bring in more people, with different backgrounds and viewpoints and priorities. The board game people, the video game people, the poetry people, the larpers and the artists and the theatre people all show up to the party and it really heats up! That’s where we are right now; aligning the scope of what RPGs can do with the stories people are actually capable of telling.

Star Crossed is currently on Kickstarter, with the campaign due to end on 10 May 2018. Several stretch goals have been reached, but there are plans to announce more.

Editor’s Note: A previous version of this story mistakenly referred to Alex Roberts as Alex Jones. We apologize for the error, which has since been corrected.