Review: Pankapu Needs More Faith in its Own Story 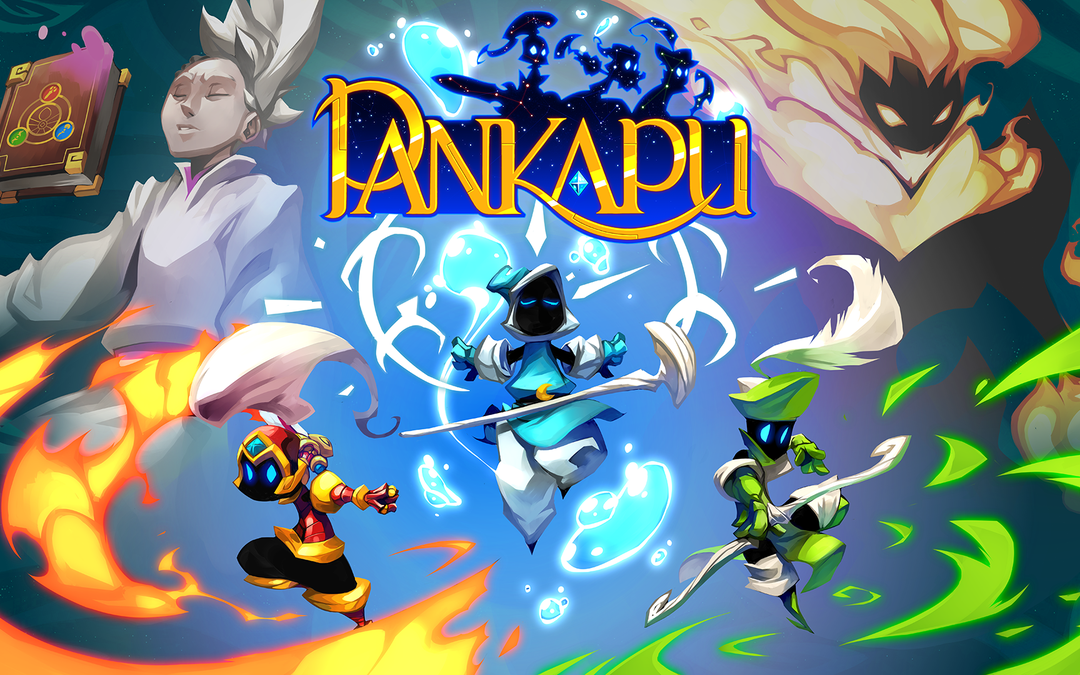 I don’t just mean visually, either. The music, the game mechanics, the level design: it all comes together for a well-thought-out, fun, and beautiful experience. You are the eponymous Pankapu, a dreamkeeper brought to life by Iketomi, the distant deity (or “Hymn,” as they’re called in the game) of dreams, in order to stop the nightmarish Gangreyn from taking over the dream realm.

Gameplay includes old-school platforming and 2D side-scrolling combat, with an interesting twist in that Pankapu can switch aegises—reminiscent of the Final Fantasy X-2 Dressphere system—to gain new abilities and attacks based on the warrior, rogue, and mage archetypes.

The story of Pankapu is a meta-narrative within the story of Jaha’rell, a child haunted by nightmares. His father consoles him in static cutscenes that frame this narrative, and honestly, I never thought I could be so moved by what ultimately amounts to a PowerPoint presentation. Their relationship is allowed to be tender and intimate, a move counter to the Tough Boy™ fear of vulnerability most games have led me to expect.

Think about it: when was the last time you saw a protagonist of any video game cry? It’s a rare enough occurrence that several Sidequest writers had to turn to Google to come up with any—a list that included Yuna from Final Fantasy X, Joel from The Last of Us, and maybe Nathan Drake from Uncharted 4. There’s an air of mystery to uncovering Jaha’rell’s backstory through exploration as Pankapu.

It’s clear the developers have a lot of love for Pankapu, right down to its conception. In an email, Jimmy Kalhart, co-founder of Too Kind Studio and game designer/storyteller on Pankapu, writes, “We conceived PANKAPU as a tribute to the games we loved, especially the ones from the 90’s [sic] which we grew up with … titles like Super Mario, Zelda, Sonic, Megaman [sic], Castlevania, Rayman, etc.” Too Kind’s reverence for these titles is apparent in every aspect of the game design, in the best way possible.

Take Pankapu’s level design, for example. Faith is a huge component of the narrative—faith that things will be okay, even if they are scary. Often, there is a collectible floating just at the bottom of the screen, with a hidden platform below it, or invisible golden steps that appear right as you think you’ve made a mistake jumping to them. Faith is a fundamental story theme, but it’s also integral to the game mechanics.

The way Pankapu uses faith to show you new game mechanics proves that they definitely have some understanding of what it can do in game design. As Pankapu gains new abilities, there’s space for the player to test them out by pursuing tempting collectibles or taking out some easy enemies—you can trust that they’re not going to make things too difficult too soon, without reason.

A point where the faith leaves Pankapu starts with its advertisement. The game’s Kickstarter page lists Lakhota Sioux mythology as an inspiration alongside the like of Final Fantasy. In an email with Kalhart, I asked how a team based in France came into contact with those myths, and he responded as follows,

Lakota mythology was a great discovery for us. Years ago, I was looking for inspiration in order to create the character of Iketomi (who hadn’t this name by this time of course): a teasing God, neither good or evil, that has a real interest in mankind. While searching sources, I found [Iketomi] and it was the perfect match for what I was looking for. It was our first step in the Lakota culture.

Unfortunately, for this first game we only used sources found on the Internet, mainly for wording. As we didn’t intend to make a game about Lakota but just took it as inspiration to build our own mythology. We didn’t push further the investigations (as it’s quite difficult to find Lakota experts in France). But as we totally felt in love with this great culture, I wish we could learn more about it and be more accurate about the reality for our next games in this universe.

I’m not Native American, and it’s not my place to speak for the Lakhota people. I can only point out the long and dangerous history non-Native people have with appropriating pieces of Native culture and using them as a selling point. Even something as simple as a name (though from an outside perspective, a deity seems like a pretty big name to be using without context) can be harmful when used to slap on a “inspired by Lakhota mythology” sticker on the ad copy.

It plays into the pattern of non-Native people including Native “inspirations” in a game as a lazy shorthand for connecting the setting to a mythic, and, as long as Native people aren’t included in development, imaginary past. This separates the perception of Native people from their existence in the present. It’s the difference between this unfortunate aspect of Pankapu and games like Never Alone and Thunderbird Strike, which were created by native developers and teams. I’m being especially critical of this lazy route towards mythopoesis, because when it stands on its own feet, Pankapu builds a rich and captivating mythology all on its own. The developers get faith. They capture the need for a figure at the top of it all, someone that the player can trust. I wanted to see more of the faith developers personally hold in Pankapu. By leaning on someone else’s story, one without true personal connection for the writers, everything “inspired by” falls flat.

In relying on his name to convey his character, Iketomi the “teasing God” (an impression I don’t share with Kalhart) came across as distant and unimpressionable. Instead of a mischievous smartass, I found a set piece named after a trickster. He meant little to me compared to the flighty friend of the mudjins, Ohoko, whom Pankapu chases to get the ardor aegis; my mischievous sidekick, Chii; or the anxiety-inducing personification of nightmares, Gangreyn. I didn’t care to learn about his story when I could read the much more interesting lore behind Hymns like the enigmatic Vaya, who presides over naivety and ignorance.

It is not impossible for game developers to divorce themselves from the urge to appropriate Native cultures, even after the game is well into development. This is exactly what Ben Esposito did when he changed direction on Kachina to create the upcoming indie game Donut County after receiving (and taking some time to process) criticism of his Hopi “inspired” aesthetic. I hope in the future the devs at Too Kind Studio follow suit, because I would love to see what amazing worlds they can come up with on their own.

Overall, Pankapu’s story strikes a very positive chord in me. Images of Jaha’rell being ridiculed and ostracized in his waking life run throughout the game, as well as images of him finding comfort and safety in others and himself. It’s a universal story about facing the fears we all have within us and recovering from the trauma of hate and exclusion.

When I played Pankapu, I was dealing with a major life change—a move back to my semi-conservative hometown—while on a bigger scale, America seemed to be moving in that same direction. These changes reflected my nightmares of social exile and intolerance, but this game helped me process and overcome them. Ultimately Pankapu plays with ambiguity in a way that allows the story to be adaptable to whatever the player fears. Its emphasis on the importance of passion, faith, and bravery (both mechanically and narrative) encourages the players to adopt those mindsets to conquer their nightmares along with Jaha’rell.