“More speed. More destruction. More fun than ever before!”

As Moonbyte game’s debut creation, the original Crashday sold over 250,000 copies worldwide—until the 2009 release of Windows 7 and the shift from 32-bit technology to 64-bit operating systems rendered the game obsolete. The transition left fans of Crashday in a lurch: the 32-bit game was incompatible with the change in software, so interest in Crashday gradually petered out as dedicated fans were forced to upgrade.

But despite this setback, Crashday’s avid community wouldn’t let the game go. When Replay Studios went under in August 2009, the community banded together to launch their own servers—and they kept them up until May of 2010. Even after that people were hosting VPN games through Hamachi and posting P2P matches on sites like CrashdayMaster. To this day we were even able to find a Crashday Discord server boasting 30 concurrently online members at 9PM on a Wednesday. What even, guys!?

These folks are serious die hard fans, and with a cult following like that, it’s not a surprise that Moonbyte resurrected the game more than a decade after its original release. 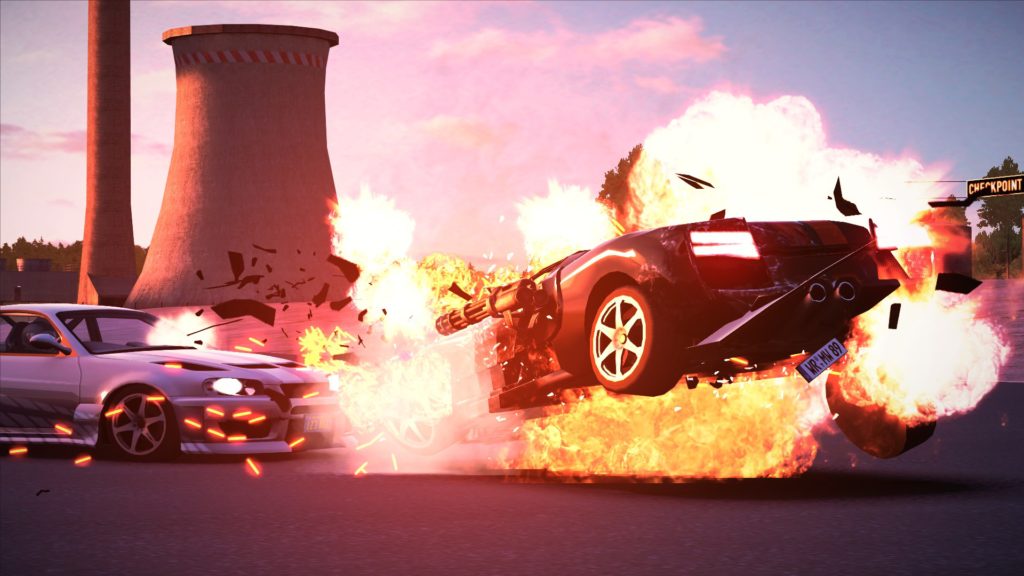 As good little video game aficionados, we (Joesph Langdon and Stephani Hren) kicked off our foray into Crashday: Redline Edition by dipping our toes into the game’s storyline. Like many racing games, Crashday’s storyline is just a thin wrapper for the game’s fast-paced car wrecking action, so it wasn’t surprising to find that the campaign wasn’t really the highlight of our Crashday experience—though it would have been nice if it had included a short tutorial so that we didn’t waste time trying to track down the right button for our rockets.

The plot of Crashday can be summed up in one sentence: mobster bros are making cash off of high stakes automotive events and they need “hot drivers” to bring in more moolah. (You’re the new hot driver, duh.)

Outside of questioning the financial soundness of car wrecking competitions (how much money can they be making if the cars keep exploding?), we didn’t mind the lackluster plot—at least, not until we stumbled upon the distasteful line “give a woman your credit card and all your money’s gone down the drain.” We were immediately put off by the douchey mobster bro persona (which is unfortunate, because Stephani’s usually a sucker for douchey mobster bros). We found the sexism bad enough that we quickly abandoned Crashday’s career mode in favor of exploring some of its more unique gameplay elements.

For example, the Bomb Run mode (basically the movie Speed) has a competitive four-person checkpoint-race twist (not to mention a cars with guns twist). There’s also the Pass the Bomb mode, which brought us back to our capture the flag days, but this time with guns and rockets strapped to cars. Oh, and there’s a Stunt Mode in which the cars compete to chain the flashiest jumps and crashes possible for the most points possible—for which there is a setting that will allow you to shoot the other cars with rockets to gain an edge. 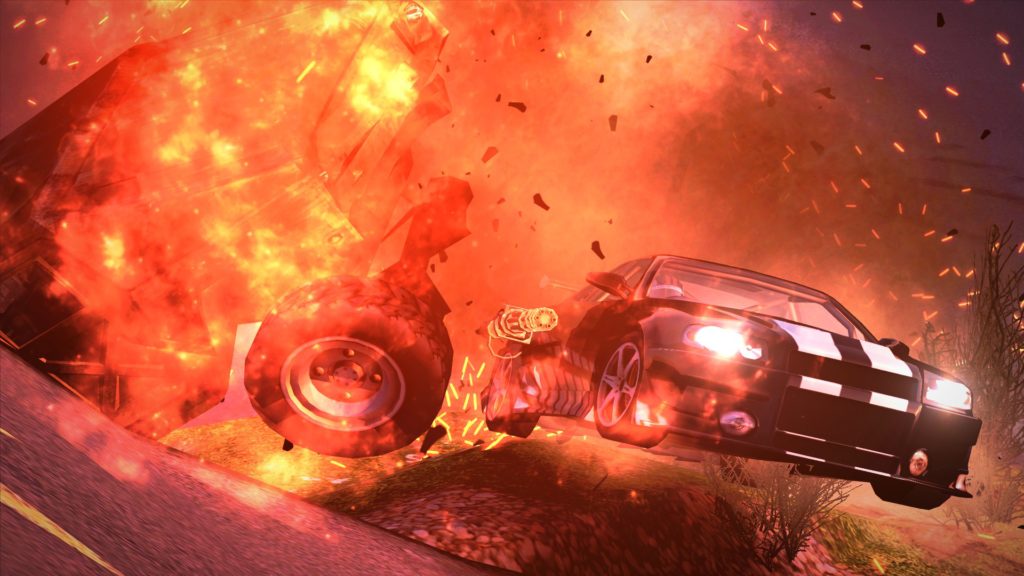 The more modes we tried, though, the more one thing became apparent: whoever picked the soundtrack for Crashday has no taste. Like a lot of the other elements of Crashday, the soundtrack gives off a flagrant air of “THIS IS A MANLY GAME.” Where was the Britney Spears? The Kesha? Or the Carly Rae Jepsen? MADONNA?

So we loaded in our own music, obviously. Or, in this case, we found the “Steam Music” switch tucked away in Crashday’s audio options. It pulled in all of the music from Joey’s Steam library, which just so happens to only contain one album: the soundtrack from Abzû. With the music suddenly transformed into Austin Wintory’s haunting underwater melodies, we launched back into Crashday and were immediately moved to near tears by the beauty of our next victim’s fiery demise. The gameplay suddenly transcended the clunky, early 2000s experience and became something more.

Play the right background music and apparently you can turn anything into an artform.

Once we’d had our fill of classically-fueled existentialism (but what is an explosion, really?), we poked around the Crashday: Redline Edition features in search of another enlightening adventure. What we found was one of Crashday’s coolest features: the track editor. In fact, Moonbyte believed that Crashday’s “flexible but still easy-to-use track editor” was the original game’s standout feature—and we’re inclined to agree. 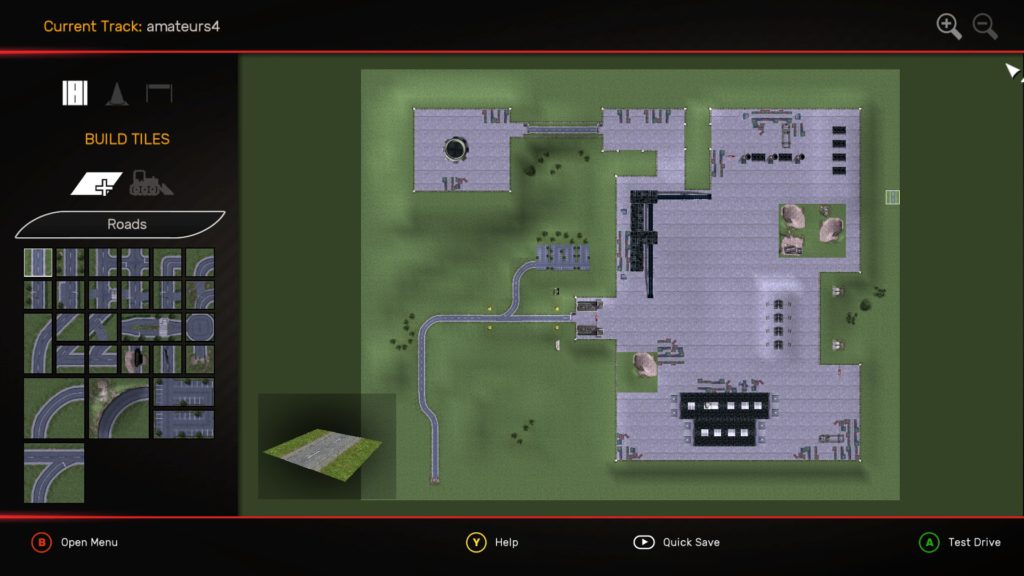 Now don’t get us wrong, the track editor is glitchy as fuck. At one point we tried to make an underground parking garage and somehow unlocked a hazy gray portal into an endless descent into the game’s underbelly.

That happened a lot. But when we weren’t dive bombing our way right off of the map, the track editor was filled with interesting odds and ends for us to experiment with. Not only was it fully equipped with roads, tunnels, overpasses, roundabouts, and stunt loops, it also included warehouses, mud pits, gas stations, weirdly square forests, landmines, garbage bins, outhouses, shipping containers, tombstones, and, of course, a entire church for us to do doughnuts around.

And then there was the hour we spent in a giant series of parking lots, trying to drift into parking spaces at 160 miles per hour.

We were pretty sure this wasn’t how the game was traditionally played, so after a good few hours of dinking around, we did the “normal” thing and decided to check out Crashday: Redline Edition’s online gameplay.

What we found was a graveyard. Not literally—though a graveyard map would be really cool—rather there was nobody to be seen. Three separate times we checked on the online scene, and every time we found not a single soul. We had suspicions that the real community existed in LAN parties and pre-arranged meet ups, perhaps giving a glimpse into the reality of the illegal street racing circuit promised in Fast and Furious.

But still, it was strange to us that we were unable to locate any online players considering the vibrant modding community (for the original located in file-dump fan sites, now brought into modern convenience of the Steam Workshop). There are hundreds of new cars, songs, and racetracks created by community members. Some of these creations even showcase ridiculous levels of time and skill investment—like this absolutely wild Bomb Run track from eCrashday’s YouTube channel!

It seems like the time and place for a game like Crashday has passed; the market has moved on. It begs the question: is Crashday: Redline Edition really worth the effort that Moonbyte put into this remake?

To fully understand the reasoning behind Crashday: Redline Edition, you have to dig back into the history of the original version of the game. When Crashday was created, Moonbyte Games was a small hobby team of only two people—more specifically, two fourteen-year-olds dreaming of the day they’d get to be called game developers. It took seven years before Crashday was picked up by Atari in 2006. Moonbyte Games even describes the original as “the arcade racing game that brought Moonbyte to life.”

The passion of Crashday’s creators is clear. The changes made during the creation of Crashday: Redline Edition are minimal—things like “Steam Workshop integration, improved multiplayer capabilities, enhanced modding support, and a fresh UI”—which means that while Crashday’s been brought to a modern, 64-bit platform, its original ambiance is intact. 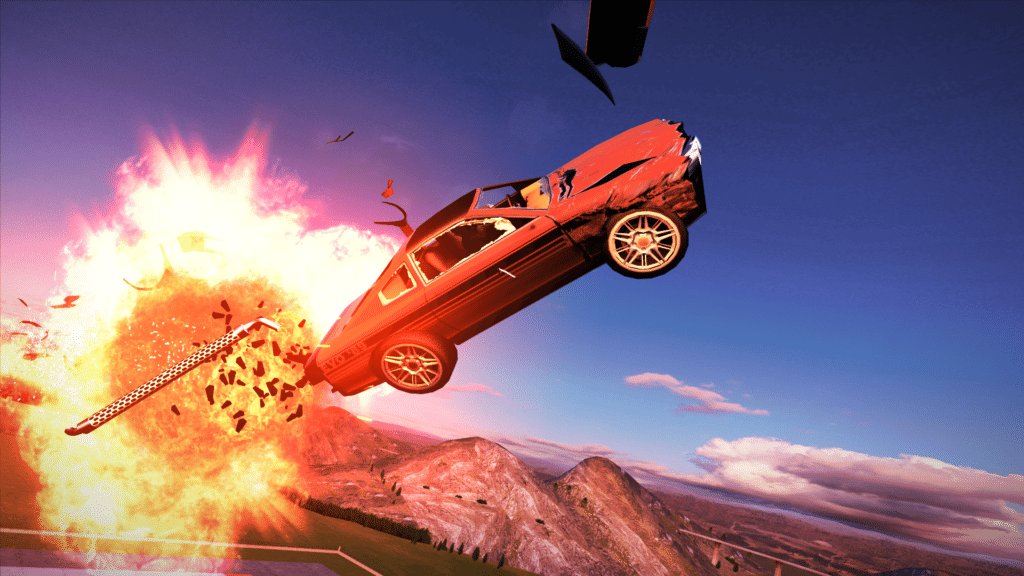 Let’s get real: no matter how you look at it, Crashday: Redline Edition feels dated. Without knowledge of the game’s inspirational start as the pet project of a pair of teenagers, it’s easy to sum things up by saying that Crashday: Redline Edition can’t really hold a candle to car classics like Burnout Paradise or Gran Turismo. But in all honesty, Crashday: Redline Edition isn’t a game that was developed for us—it’s a love letter written by the developers to those 250,000 original players that took a chance on the two kids that came together to become Moonbyte Games.

It’s nostalgia in all of its polygonal glory.