I came to the Final Fantasy franchise about the same time that a lot of folks did—with the mass release of VII, which happened shortly after I first got my Playstation. From there, VIII and IX both came out, one after the other, so that I’d gotten used to annual FF releases. However, I didn’t own a PS2 when Final Fantasy X first released, and so I had to wait. I filled that time with re-releases of earlier games in the series. By the time I finally did get to FFX, I’d played every iteration except for the original, Japanese-only Final Fantasy III. I was steeped in the lore, well familiar with the plucky band of heroes coming together to save Gaia. I knew all there was to know about Crystals, and Jobs, and Active Time Battles. I was ready.

Final Fantasy X had none of those. Oh, sure, it had the base mechanics—there were still Summons (called Aeons), Limit Breaks (Overdrives), Airships, Chocobos, and Ultimate Weapons. But despite all of that, there was nothing recognizably Final Fantasy there to eighteen-year-old me, and I was not happy. A large chunk of the most classic elements were there; it was really the window dressing I objected to. I can see now that part of the reason is that, in my misguided youth, I felt entitled to a certain kind of experience, and I was upset when that experience was not provided to me. While I understood on the surface that the franchise was Squaresoft’s to do with as they pleased, I was, in the arrogance of a teenager, angry that they didn’t do what I wanted them to do. That is, obviously, a very silly stance to take. 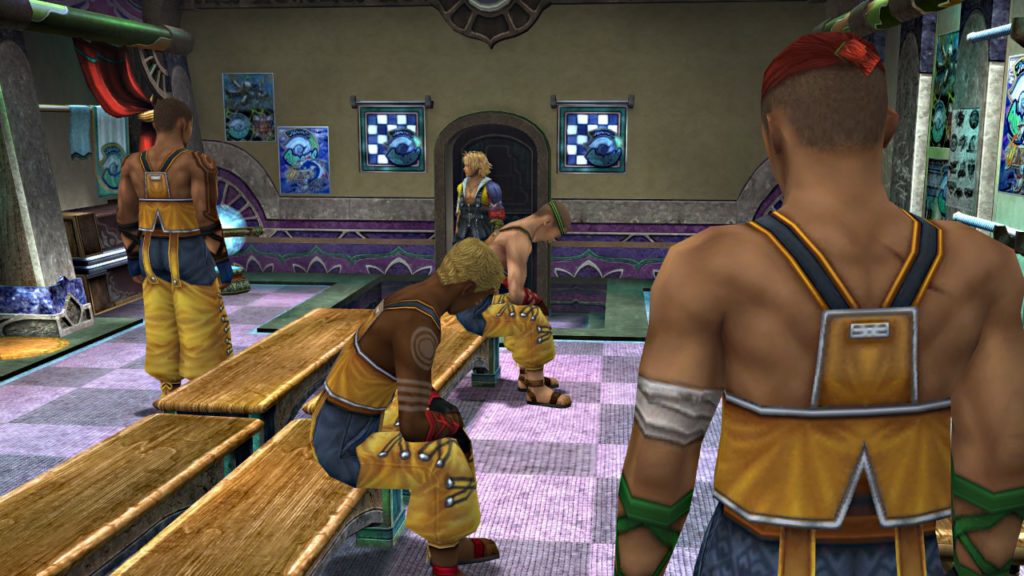 They were as sad to be there as I was.

But take it I did, because teenagers are often silly (and should be!). I had beaten FFIX in four days, suffering from mono and huddled in my room, wrapped in a blanket, with only enough energy to press controller buttons. FFX took me months. Each play session was this constant struggle between playing a game that I knew was honestly pretty great and my own resentment over the fact that it was not what I wanted in a Final Fantasy game. I wanted rogues and ne’er-do-wells, and instead I got a couple of athletes and some sort of priestess so meek she might as well have not had a speaking role (so I thought at the time).

So recently I decided that I would give Final Fantasy X another try. I fully expected it to adhere to the conclusion I’d come to in the intervening years—it was not for me. I sat, in light contentment, ready to put an hour or two into it and then dismiss it once again. Instead, I was caught by surprise, as I had somehow entirely forgotten the opening event of the game: the fall of Zanarkand. I had remembered that Zanarkand existed, and that Tidus, the main (or at least POV) character, was from there, but I had somehow entirely forgotten that we witness his last moments there. The world Tidus leaves, the Zanarkand of the past, is a place of high technology, great cities powered by machines, a place more-or-less utopian in nature. When calamity arrives in the form of Sin (perhaps the cutest world-ender there ever was), that world is destroyed, and Tidus is pulled forward in time to something new. 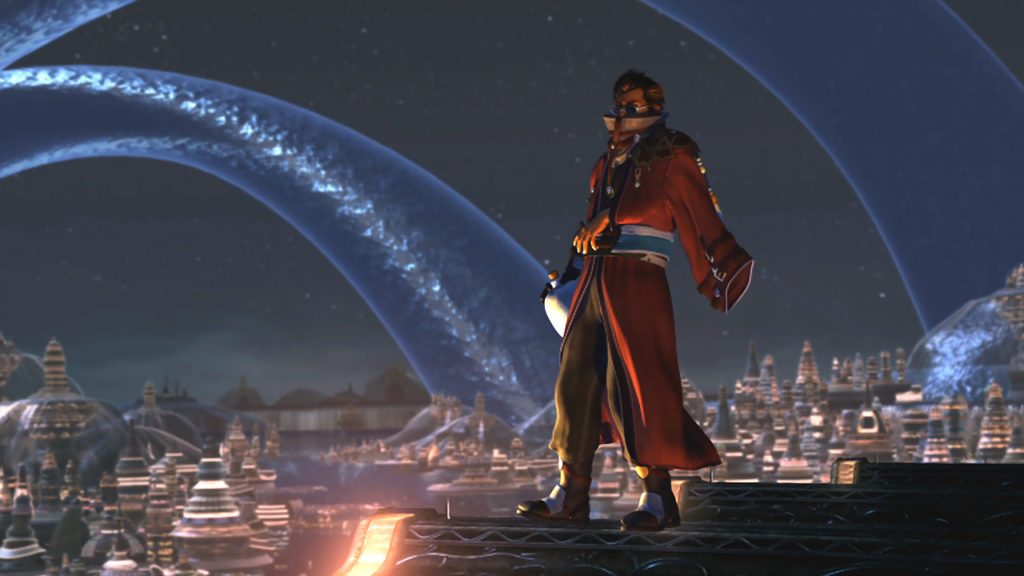 These last moments are important, both within the context of the game itself and on a metatextual level for the entire series. In both contexts the message is clear: The world is not yours. This is not the world you know. It’s something Tidus himself comments on shortly after arriving in Besaid, but it’s a message to players too: Zanarkand is the past. It is a thousand years ago, and it is the last nine iterations of the franchise. It is the vestiges of Final Fantasy’s historical trappings, those great high-fantasy and futuristically sci-fi empires, those same things I’d spent so much time becoming an expert on, being washed away to make room for something new. The prologue of this game is all about saying goodbye to those things so that one can move forward. Tidus himself is a relic of that past, shunted through time and into a place where he should not be. This is again metatextual; within the story, he’s the spitting image of Wakka’s lost brother Chappu, and beyond those confines he has the same hallmarks—blond-haired and blue-eyed, wielding an improbably large sword—as the lead of the arguably most famous of the Final Fantasy iterations: Cloud of FFVII. Tidus is an echo and a memory, a dream of something that once was. He is part of the world, but the world is not his. It is shared, lived in, passed on.

One of my chief complaints was the cast. I didn’t like them—or rather, I didn’t like Tidus and Yuna. My problem with Yuna was a simple one—whether a cause of the directing or the sound editing, I didn’t like the way her voice sounded, and I’m still not really a fan. There’s a … choppiness to it. Her speech pattern is full of hard stops that sound less like halting speech and more like whomever clipped the sound recordings didn’t do a very good job of blending. As an adult, it’s easier to let that one slide, given how early this game in the days of voice-acted games. Tidus’ sins were worse; I objected to his easy exuberance, and his voice grated me. This is not a case like Yuna where it’s in the editing, but the actual tone of the voice itself; there’s a wheedling aspect to it. His easygoing manner I take less issue with now, although I still question it, given he just witnessed first hand the destruction of his city. That takes a toll on a person. 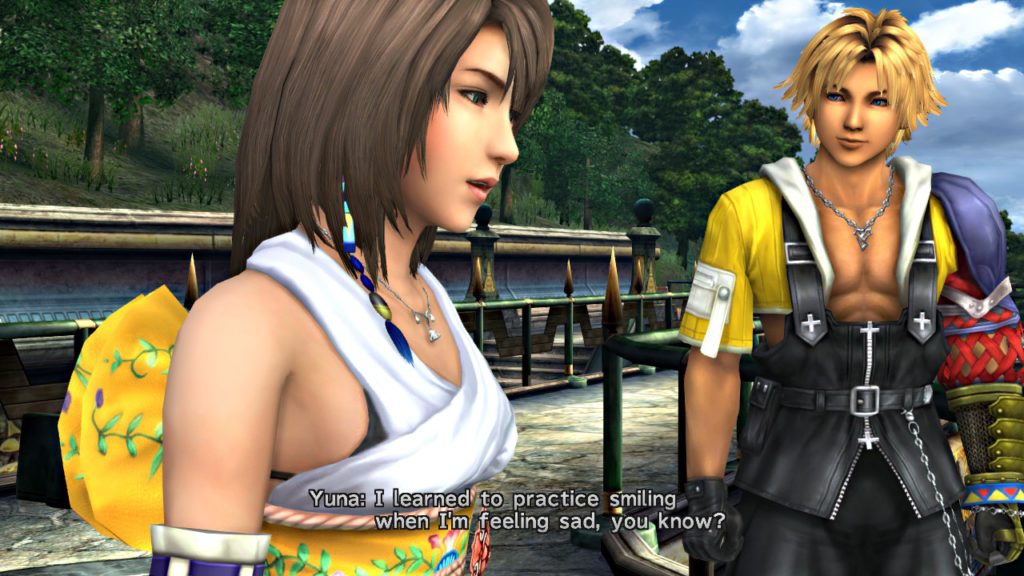 Smiling seems inadequate, given the gravity of things, Yuna, but okay, fine.

In fact, given the time frame of the release, I suspect that the climate of late 2001 played a strong part in my negative reaction. The attack on the World Trade Center was only months before, and I was hungry for something that would help me process what those events even meant to me. FFX is one of those few major releases which was created before the events of 9/11 and yet released afterward.

For someone growing up in the States, someone who was socially and politically aware prior to those events, it’s hard to emphasize the sea change that occurred in the social consciousness. There’s a lot of looking back on the ’90s with rose-colored glasses, and it’s not hard to understand why—while prior generations will remember decades of Cold War conflict, those of us who came of age in the ’90s started to see something different. Walls were falling, the idea of communication as the way forward began feeling not only plausible, but like it was really the only way that made sense. Pair that with the rise of technology during the decade, and it was hard to shake this feeling of hope for the world. Everyone was connecting in a way that hadn’t happened before, both literally and figuratively. Our country was still involved in conflicts, but these seemed so small compared to what had just ended—cleaning up, as it were (the shortsightedness and ignorance of this viewpoint were significant, certainly). In short, we were sold a bill of goods that proved terribly, tragically out of line with reality.

The attack on the Twin Towers was a blow—not just to the country as a whole, but an especially savage one to the social culture coming out of the ’90s. We sat there, hurt, taking stock of our injury, and confronting the fresh desire to retaliate in kind. For some, that retaliation was old hat; they’d been alive and aware during those decades of conflict. For others, those of us just leaving high school, just entering the world, it was a new kind of fear. We had been taught, raised to believe, that peace was the way forward. Why were we being attacked? Why were we so eager to attack in kind? Obviously a response was necessary, but was war really the answer? Had we not learned that lesson? On a personal level, I understood the desire to strike back. As a child of abuse, I had spent my life harboring that desire, to return it upon those who’d hurt me. But I understood too that actions have consequences, and public actions especially so. For all that we’d been hurt, it was terrifying to see the US march to war again. It was terrifying to see our identity as a country writ large in the public eye as an aggressor of smaller states across the ocean. It was terrifying to watch our government at home stamp down on freedoms in the name of security—for all that I had come up during years of peace, I had still learned the lesson in school that a freedom once taken is very rarely regained.

This is a very long aside to reinforce the main point that some of the sensibilities of FFX seemed, in the immediate aftermath, to be a bit unrealistic. It was a game that presented us with an immense and immediate scene of destruction, a destruction its lone survivor seemed blissfully unaffected by. Tidus pined for home, certainly, but he seemed to harbor no rage or ill will toward the thing which took it; he carried no fear in his heart, and seemed far more perturbed by the spectre of his long-lost father—a man whom he didn’t even like (this part, at least, I could empathize with)—than he was by the obliteration of everything he’d held dear. 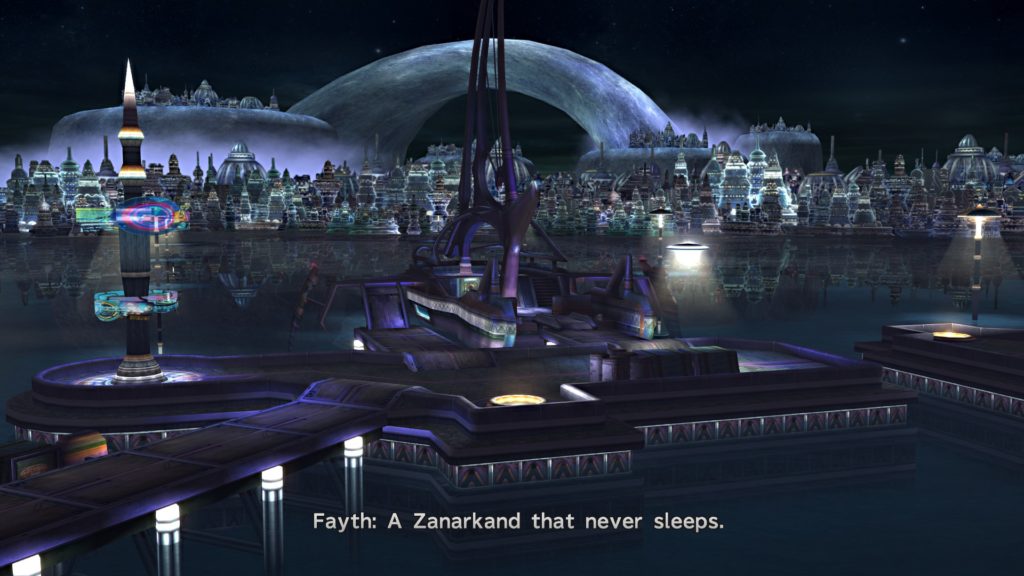 This line was particularly striking, given one of NYC’s nicknames.

Of course, it’s important that this is not a US-developed game, and was not developed in or shaped by our culture, except in the ways that our culture intersects and interacts with modern Japanese culture. I can’t speak on that; I’m not qualified to. While I wish that the role of Zanarkand had played a larger part in Tidus’ story, it winds up being unnecessary; with or without the events of Zanarkand, the story of FFX is one about death and loss. The Summoners’ quest to defeat Sin, and Yuna’s quest in particular, becomes about the end of conflict, the reversing of a death spiral. In this aspect, FFX was remarkably prescient; here was a story, developed before 9/11, that came to us only months after it, cautioning us against the escalation of death and retaliation. It’s a commentary on the past and an encouragement for the future, delivered at exactly the right time to exactly the audience that needed it. I wonder how well we were paying attention.