“What Matters is I Helped”: On Being Human With Cole In Dragon Age: Inquisition

I recently finished Dragon Age: Inquisition, the latest game in one of my favourite series. I’d expected to be cut up by the finale, which I definitely built up in my head, but instead I found myself affected by an unlikely favourite among the Inquisition: Cole, the spirit.

Cole doesn’t often crop up on my social media feeds. He doesn’t seem to be much of a fan favourite. In fact, I didn’t know he existed before playing the game; he was the only companion I hadn’t seen in previews or fan theories. Yet it was Cole—part mystery, part weirdo—who really captured my heart.

Cole is a spirit of compassion housed in the body of a young man—the original, human Cole. He looks dishevelled and a bit gaunt, and he’s got a big-ass hat covering his eyes most of the time, giving him some much-needed distance from the physical world. And he can sense other people’s pain. 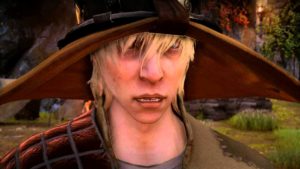 Cole uses this empathic ability to find people who are suffering and help them. When you first meet him, you learn that he is able to make people forget him after he intervenes; he doesn’t expect any reward or acknowledgement. He simply wants to help others, and does not tolerate those who would do harm.

It’s this attitude that initially resounded with me. It seems simplistic—and maybe it is, compared to a lot of Dragon Age’s morality, often intrinsically linked to politics and power. Cole believes in being kind, unless someone else is being unkind. Then, anything goes.

Unlike Cole, I’m not a spirit. Inquisition seems to recognise this disparity between the player and this character by addressing Cole’s beliefs and self-perception through the eyes of your human Inquisitor. As the game progresses, Cole comes to the Inquisitor for guidance on his identity. You face a choice: do you encourage Cole to become more human or to embrace being a spirit?

Like many decisions in Bioware games, there’s no right or wrong path here. Each option comes with their own benefits and sacrifices. As a spirit, Cole loses some of his sense of self along with the capacity to feel his own pain, but this makes it easier for him to help others.

A more human Cole feels his own pain alongside that of others, and he becomes more solid. People don’t forget him anymore. He must learn to accept being seen and remembered. In return, he can relate better to those he wants to help. He can feel things he couldn’t before; not just pain, but joy and fear and love.

This choice mirrors a struggle I’ve faced many times in my life. As a woman of colour, I’ve been asked to nurture, to comfort, and to put others first since childhood. This makes it hard to know where to draw boundaries between myself and my capacity—and desire—to help. Do I prioritise my ability or my self? My emotions or someone else’s? 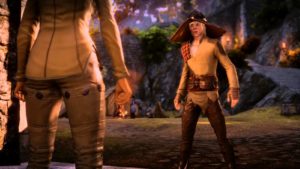 When he stays a spirit, Cole seems to me to resemble a tool and a symbol, rather than a person. In giving up part of himself, he can focus more clearly on helping others. This prioritisation of community over the individual is something that holds a lot of value but, in this case, it also means that Cole centres his life around others. For people in the real world, this is unsustainable.

I chose to encourage Cole to become more human. Until this point in his story, Cole is in an in-between place, trying to find a space for himself in the world. My decision came from the knowledge that living in and navigating the physical world (as opposed to the Fade, the realm of spirits in Dragon Age) requires us to manage our own pain. We need to come to terms with our value as individuals as well as recognise the importance of wider collectives and communities.

And as someone who relates to Cole’s way of thinking, I wanted to see how he would react to being human. I frequently feel at odds with a world so full of mess and hurt and violence. I don’t always know how to cope. So I turned to Cole for comparison.

Cole’s greatest fear is despair. You learn this in the Fade, in a little graveyard. Each tombstone has the name of one of your companions alongside the thing they fear the most. The link between fear and death is not accidental. Some of those tombstones tugged at my heart (there was an audible “oh no!” for Solas’ fear of dying alone), but only Cole’s sucker punched me.

I don’t know if I’m afraid of despair—I think I’ve faced, and survived, it too many times to fear it. But I do wonder if there is a limit. How many times do you have to feel hopeless, how many times can you truly despair, before you can no longer return? Is it possible to really die of heartbreak? Worse, I worry sometimes that despair might change me, distort hope into bitterness, compassion to cruelty, healing to destruction. 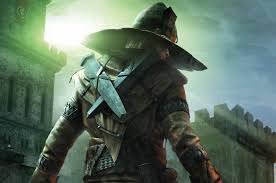 Cole feels so much all the time, even though he cannot fix everything. Even as a spirit, he cannot be everywhere in the world at once. He finds the people around him who need help and he does what he can. Sometimes, I beat myself up over not being able to help everyone, to fix all of our world’s problems, to heal all this pain. Sometimes, things seem desperate because I can’t be there for everyone. But, in Inquisition, Cole doesn’t fall to despair. He reminds me that no single person could do all of that anyway. We can only do what we’re able to.

Cole’s is a story about finding a place in the world. Cole exists because, as a spirit, he was unable to save a human boy, the original Cole. So he lost himself and became the Cole that you meet in Haven, compassion muddled up with the memories and the body of a dead boy. You must help him find himself again, whether as a spirit or as someone completely human.

In the real world, I’ve lost myself more than once in my attempts to be there for someone else. Cole’s story comforts me, and reminds me that I can help people without sacrificing myself in the process. In fact, an important part of Cole’s journey is that he finds friends in the Inquisition. With the Inquisitor by his side, he is no longer the only person taking care of others, and he has someone looking out for him, too. Cole becomes a person with an identity beyond his core value of compassion, no longer just a tool but a person, someone valued and recognised.