In fact, more games probably should make use of the immersive power of their HUDs. When Sidequet’s writers sat down to chat about our favorite interfaces, we discovered that stylish, innovating HUDs aren’t just functional, but actually instrumental to our enjoyment of these games. Sure, we might enjoy them if the menus and health bars weren’t quite so neat, but that they are encourages us to get more invested, more interested, and more immersed in each game world. 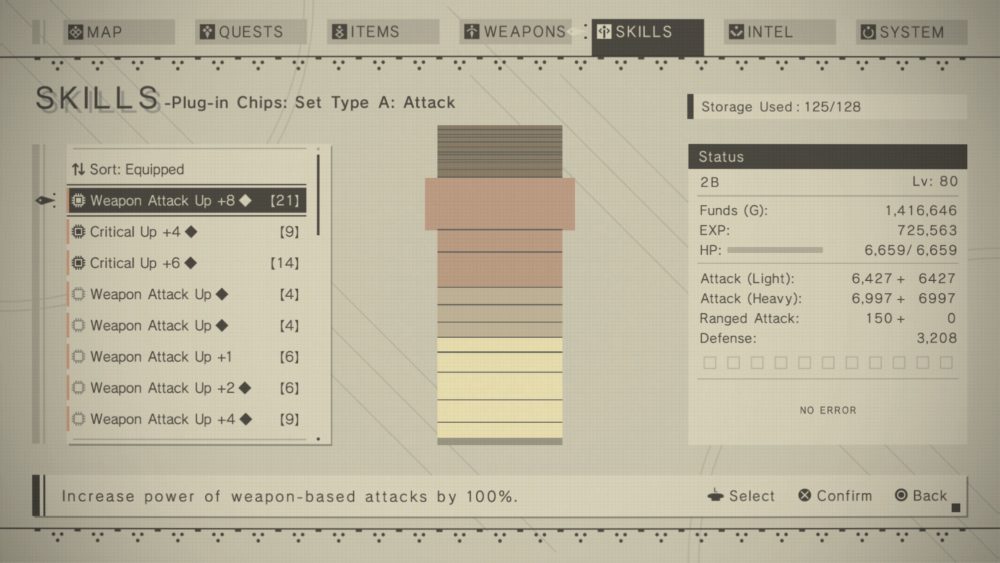 NieR: Automata is a recent release and a great example of a balance of clean versus functional HUD and UI. Some games try to be too minimalist and clean, which results in a lack of clarity, not matching the motifs of the game, or being just plain illegible as you’re trying to squint reading the text.

NieR: Automata is a visually pleasing and charming middle man for its UI—playing as a futuristic, top-of-the-line battle android in YorHA’s fighting force against older, rustic machines, your UI is clean, clicks between different windows and panes as if you were scrolling through an iPhone, and is stark white with enough negative space contrasts to actually see what you’re enacting on your character.

One of the most fascinating aspects is the ability to even customize what parts of the HUD you can get. Since you’re an android, different upgrades called “chips” are available in the world or to purchase from shops, and, like any software, take a mechanic of “memory space” to support and install on yourself. Say if you want a larger shockwave damage percentage—not only can you remove extra health percentage to give yourself extra space to work with, but you actually have the option to completely remove the mini-map on your HUD, the ability to see health bars of enemies, or even objective markers on your in-game sights, all to balance your “memory space.” (There’s also an option to remove your core OS of personality and functions which the game says will instantly kill you, and guess what happens if you take it out.)

The UI makes you feel a sense that you are an android working within your capacities, making and balancing logical choices between defensive or “OS” interfaces, and the HUD “glitching” just enough to be alarming when you take damage but not to be visually annoying. Your vision even changes to black and white and battle music distorts when you fall below 50 percent health. If the original NieR’s UI/HUD was modeled after a scrapbook for its mythos roots in magic and book-based mechanics, then NieR: Automata keeps up a lovely tradition of being thematically appropriate for its characters and setting, even if it’s 11,000 years in the future’s post-post-apocalypse. 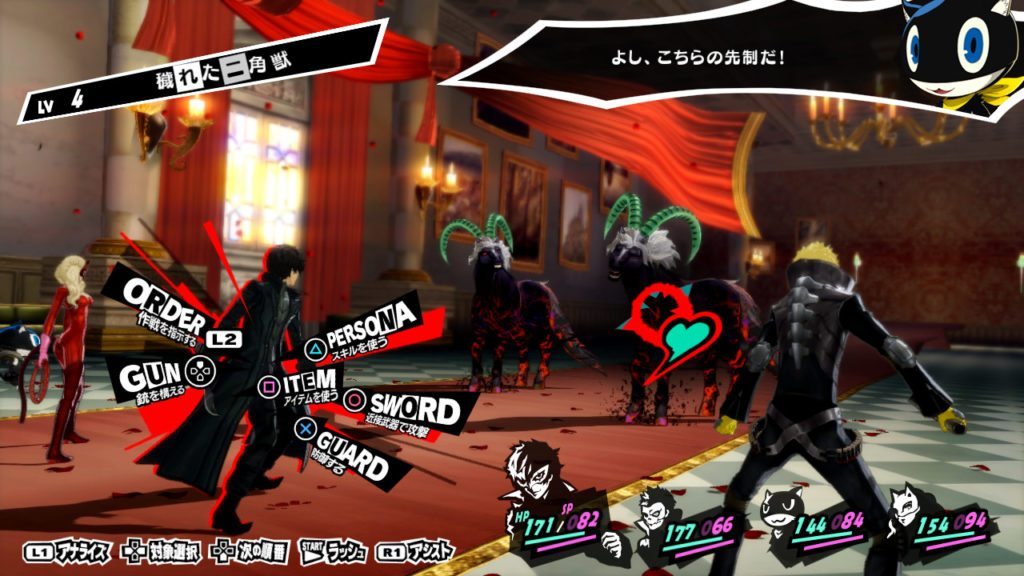 I’ve never seen a game so defined by its HUD and UI elements.  The menus scream style and define the tone. They all lend to the feel that you are leading this party of phantom thieves. The attack menu is split by button presses rather than scrolling through a list of options another list of options, so a quick press brings you to the list of actions that option has or performs it if there are no other choices. It’s so dynamic, and as a massive JRPG player, I don’t think I’ve ever seen something that is so stylish that elevates JRPG design in such a fantastic way. I think this system sets a standard that other turn-based RPGs need to all be using—easy means of accessing actions while presenting them in a way that feels consistent to the universe they are creating.

Even outside of pure function, this all stands out in particular thanks to it being unified with the rest of the game’s stylistic choices. Everything feels unified—the blacks and reds that fill the screen after winning a battle, in the pause menu, even the music in the background helps pull together this stylish thief aesthetic that is so dominant. I may have a lot of problems with Persona 5, but when I think of style in games this game’s UIs and HUD will always stand out as definitive. 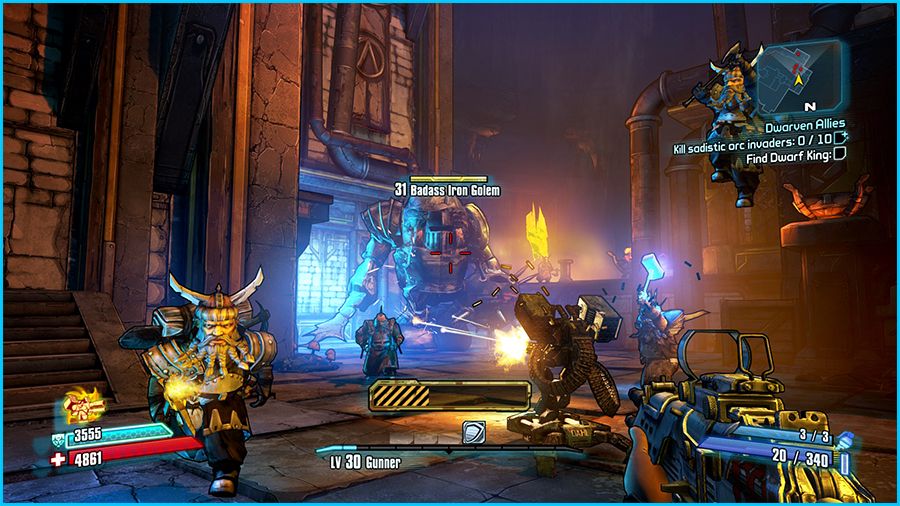 Ugh, if only this wasn’t as Axton.

I feel like I only ever talk about how much I love Borderlands 2, but seriously, the HUD is perfect. In a role-playing first-person shooter, I’m looking for something that gives me enough information in a clean, concise way without being overwhelming. BL2 hits all of those spots for me. It displays exactly how much of everything I have—health, ammo, shields, grenades—in key locations (a.k.a. the corners). What I especially love is that there aren’t just numbers up there. Everything has a bar that visually tracks your progress. In the middle of a raid boss and need to know if your health is super low? Glance at the left of your screen. Has your shield recharged? Look right on top of it. Oh, no, can I use my action skill yet?? Check if your character icon is green. It’s all so intuitive. The information isn’t overwhelming and is presented in an easy-to-access way. I never pay attention to how much damage an enemy is taking, but I do appreciate the giant red CRITICALs that pop up and their health bar going down.

Probably my favorite thing about the HUD is the presence of the mini-map and small list of objectives. I always get caught up doing three or four side missions when I’m in an area. (Any game with multiple objectives should have this. Seriously, when I was playing Kingdom Hearts, I lamented that one didn’t exist. Like, enough that I don’t know if I want to play the sequels.) The mini-map tells me what mission I’m working on, what I need to do, and also shows where I need to go. Perfect. Because really, the purpose of Borderlands isn’t a straight-up shooting fest. It’s the story. It’s the world, and the characters, and the development. The joy in BL2 is going to Lynchwood even though you don’t need to in order to take care of a baby skag. But the game doesn’t neglect its gameplay. Unlike a certain beautiful Wild game involving breathing that I’ve pored over 150 hours into, I never doubt when I’m out of ammo (aka when a weapon is reaching the “it will break soon” point). Unlike a wonderful father-daughter bonding experience that involves being the last of humanity because zombies (but ohmygod I can’t wait until the sequel), I don’t have to pull up a sort-of menu in the middle of gameplay to figure out how dire my situation is. BL2’s HUD makes it accessible to even new gamers, encouraging all people to join the mayhem.

Hye beat me to the punch with NieR: Automata—I’m only a few hours in, but gosh, that UI is gorgeous and so fluid and interesting from a story and mechanic perspective.

Instead, I’ll talk about Portal. Portal is easily my favorite game of all time, and while its UI isn’t the reason for it, it’s definitely part of the equation. It took me multiple playthroughs to appreciate all the information packed into its minimalist HUD—naturally, the reticle is centered, but rather than being a simple crosshair it’s an oval formed by two slim curves, one blue, one orange. Each curve represents the two portals you can shoot. When you point the reticle at a surface, curves that are filled in mean the surface will hold a portal, while curves that are just outlines mean you can’t shoot a portal there. It’s a simple, subtle, and incredibly functional feature.

Though it took me considerably more time to figure out the rest of what’s so genius about both of  Portal’s HUDs, that’s my own fault for not paying attention. Because you sometimes need to shoot portals into two separate rooms, it can be difficult to remember which color portal was where. But the game’s got an answer for this, too—next to each colored curve is a little circle denoting which portal you shot last, telling you which is active. Again, it’s subtle, it’s simple, and serves its purpose so well that I look back at those hours I spent shooting and re-shooting portals because I never noticed that indicator and feel ridiculous.

I could talk endlessly about how much I love this game, but its HUD is reflective of all of them—it’s clever and functional but not obtrusive, giving you exactly what you need when you need it and never getting bogged down by familiar gaming conventions.