Pay Attention To Them: ‘Ghosts of Miami’ Is a Queer Cuban’s Joy

I knew almost absolutely nothing going into Ghosts of Miami, the latest visual novel game by Pillow Fight. I hadn’t seen a trailer; I hadn’t played the demo. All I knew were the words “like Phoenix Wright” and “Queer Cubana-Americana detective in ’80s Miami,” and I was on board. And really, that should honestly be all it takes to get you all on board, too.

Ghosts of Miami is a fun, colorful, brightly printed (think Steven Universe meets Miami Vice), and fantastically scored game where you play as Consuelo Martinez, who goes by “Chelo,” as she struggles to solve five cases in the crime-ridden heart of Miami, Florida, in the 1980s. Chelo tracks down missing girls, vanished friends, and kidnapped Cuban refugees, all the while trying to get her private investigator business off the ground. Broke, starved, and trying to make it in the world as a freelancer while dodging her dysfunctional family’s calls, Chelo truly feels like a more relatable protagonist for the modern era than most I have seen. I especially enjoyed this game because it seemed to speak directly to me and my Cuban heritage and say “I see you.” More importantly, it speaks to the rest of the world and says, “Pay attention to them.” 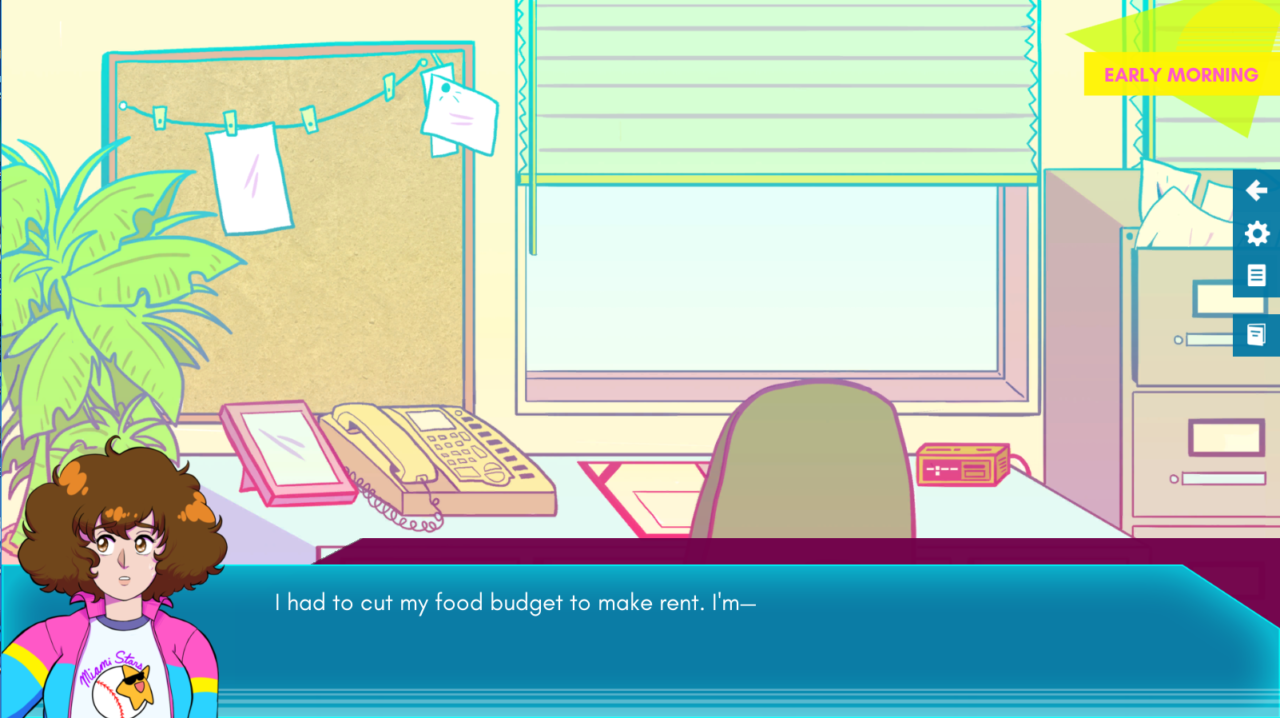 Chelo is a 20-something self-proclaimed private detective who, although unlicensed, is skilled and has developed a reputation for solving difficult cases. The plot deals with some heavy topics, such as serial murder, teens being targeted by drug cartels, kidnapping, anti-Castro sentiment, and the treatment of the LGBT community at the time. The game takes a very respectful approach to all of it though, and I actually learned a few historical things about my own heritage in the process.

In terms of gameplay, you click around to choose locations to visit and to make the occasional deduction about a clue, but the story moves along with minimal guidance from the player. To me, it felt more like a light “choose your own adventure” novel than some of the visual novels I’ve played in the past. I was all right with it for the most part, although I was a bit disappointed that I couldn’t decide how Chelo reacts to the flirtatious advances of her various romantic options.

Investigation within the game mainly involve picking locations to examine from a list of choices. What makes this more interesting are the Persona-esque limitations of how much time you have in a day. There are instances where you will have several places to visit, but not enough time to visit them all, and a lot of the tension in the game comes from hoping you’ve made the right decisions in which places to go to and which ones to leave. Weirdly, it sometimes felt like the game had its own idea of which order you would visit the locations in, and it didn’t adapt to you going a different route, resulting in some jumbled story pieces. In one particular instance, the main character referenced a conversation that hadn’t happened yet. 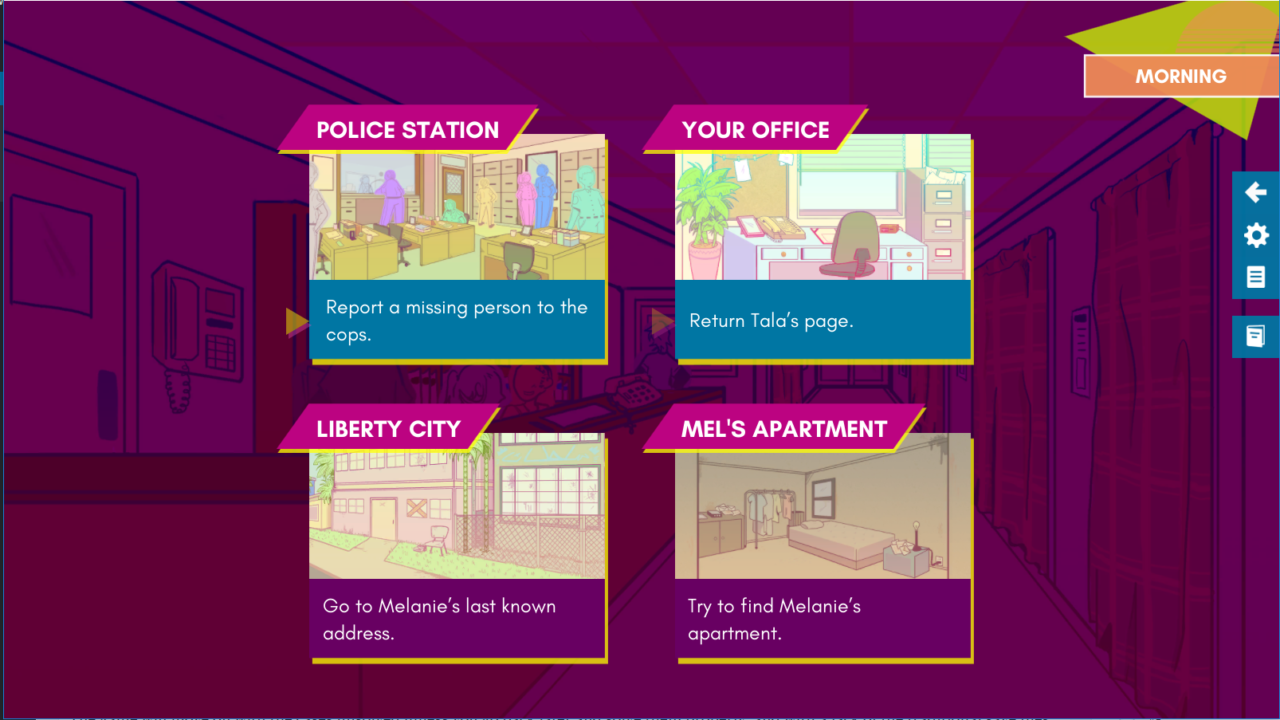 Towards the end of each case, the game will have you make a series of decisions that can lead to different endings, leaving the case solved or unsolved. I found it surprisingly tricky to solve some of the cases if I wasn’t thinking thoroughly about all the conversations I’d had and the clues I’d found. Fortunately, keeping tabs on important information and characters is done for you, and there’s a conversation log in case you press the space bar a little too quickly.

The game will move on even with the cases unsolved, unless you go back later and solve them properly. With a lack of the traditional save files, you have no way of restarting from a certain point to make a different choice if you choose wrong. However, the individual cases themselves play very quickly after you’ve gone through them once, so going through them multiple times to get that perfect ending is not an issue at all. You do want to get that perfect ending, too. The story does a great job of making you feel like the stakes are high, and you care about the characters you’re searching for. The first time I failed to solve a case, I felt suitably chastised for it and swiftly went back around to clear it properly.

Part of the gameplay involves potential romantic interests that are often key parts in helping Chelo solve her cases. They have rich backstories that flesh them out as more than just love interests. You have five potential lovers: Janet, the professional drag king “Prince Charming;” Tala, the nineteen-year-old high school senior; Ethan, the EMT; Richard, the significantly older crime lord; and Chelo’s childhood best friend Luciana Escobar, heir to a criminal empire. 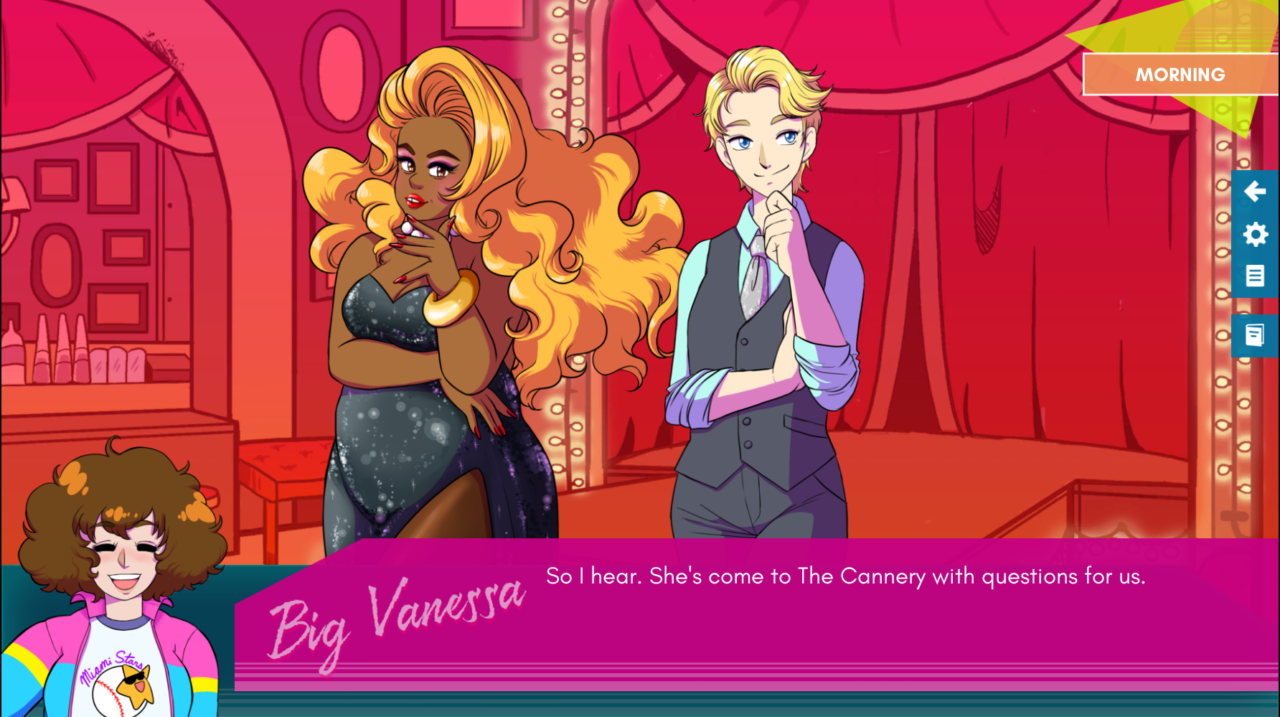 For the most part, the romantic plots seemed much lighter and secondary to the case plots. During my playthrough, I actually didn’t manage to properly get together with any love interest. I’m not sure if that was due to a misstep on my part or whether the game simply places a much larger importance on the main story, with the love interest routes serving as levity. Flirting is largely incidental as Chelo gathers the information she’s looking for, which I feel works in a game where you’re having to talk to these people to find potential murder victims.

Aside from the love interests, the game also populates the city of Miami with several characters from a wide range of ethnic backgrounds, adding to the realism of the setting and making for some delightful encounters. The character designs overall were varied in skin tone, race, and body type. Chelo looks somewhat startlingly closer to myself than than what I’m used to seeing in Latinx protagonists in games and movies. All of the character models are detailed, with plenty of variety in facial expressions, and while the backgrounds aren’t as detailed as the characters are, the simple lines and color splashes are a great way to accentuate the character designs. 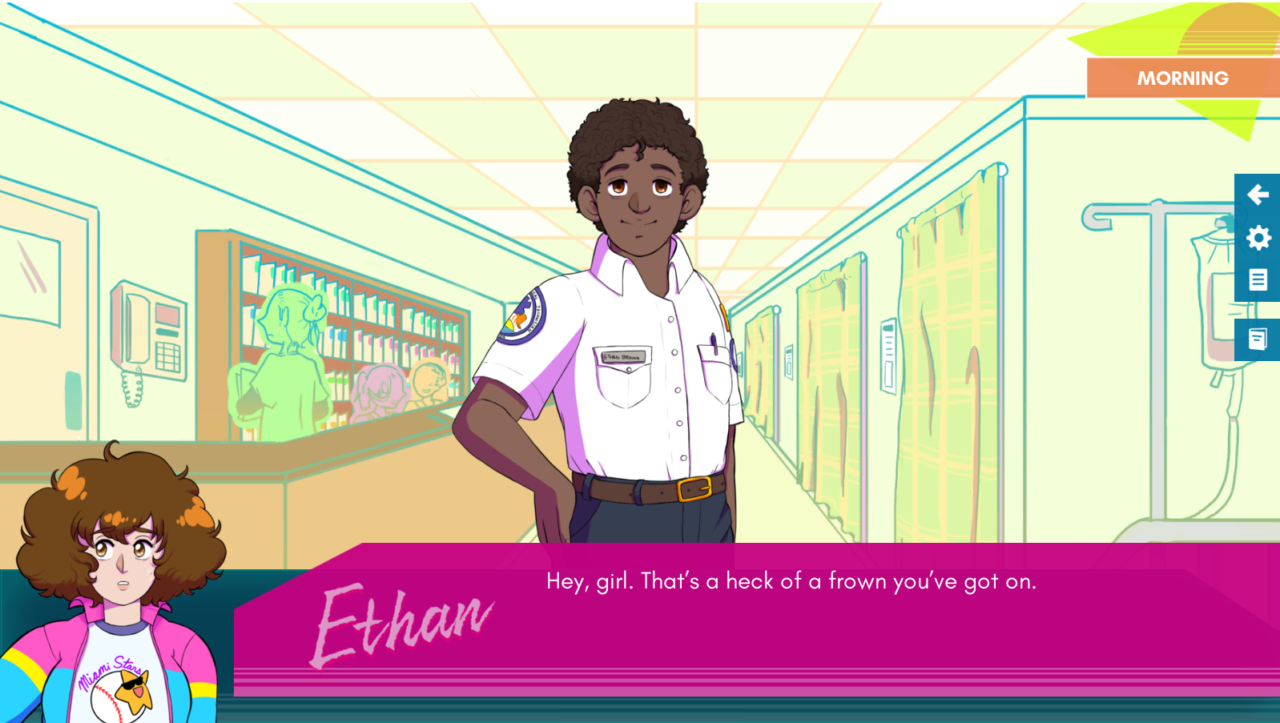 By far, my favorite thing was the use of Latinx consultants in the creation of the game. This strongly explains why the game feels like such an authentic experience and includes the mention of Cuban-American cultural gems, like Radio Mambi. Even the music is very reminiscent of Calle Ocho (Eighth Street) in Miami, with its salsa-inspired soundtrack and heavy reggaeton beat in the start menu. As someone who grew up hearing that sort of music, it made the setting feel even more familiar and immersive to me, like a quick break from real life to visit home. (Unfortunately, the game missed the chance to include familiar Miami places, like the giant street roosters of Calle Ocho.)

In most media revolving around Latinxs, particularly Cubans, the narrative tends to focus on certain parts of our culture almost exclusively: the drug cartels, the crime, and the loud and “chusma” (the Cuban equivalent of “ghetto”) areas. This game was more than refreshing; it was an attempt at healing some of the damage that the media has done in the past.

The story and environment were clearly crafted with the intent of giving a wide audience a view of what being a Cuban in America looks like from the inside. It focuses on the good and the bad, but really highlights the good. You have the sense of community and connection between the characters, mentions of our delicious food, vibrant music, and the perpetual drive to succeed under any circumstances, largely passed down through generations from ancestors who arrived in the United States fleeing a terrible life and hoping to make a better one for themselves and their families. The game also contains accessibility features such as text-to-speech, and has been translated into Spanish and Traditional Chinese, setting Pillow Fight apart in its mission to make its games emotionally and physically available to as many people as possible.

All in all, the game is a solid buy if you’re looking for a light police procedural packed with a diverse cast of people, created by an equally diverse team of developers. Ghosts of Miami by Pillow Fight is available now in the Steam store, Itch.io, and the Humble Store.

**Ghosts of Miami was developed in part by a former WWAC team member, and a copy of this game was provided in exchange for an honest review.**