Diary of a Pathfinder Sex Idiot: The Goodest Boy in the Galaxy

RYDER FINALLY GOT LAID, Y’ALL. But, ahem, I’m probably getting a little ahead of myself here. After what felt like an eternity of flirting awkwardly, making my feelings known, taking him on every mission in the hopes of impressing him when I managed to use my jetpack successfully, I finally triggered the romance for Good Boy of Andromeda, Jaal. I was pretty sure, before I even started the game, that this was the romance I was going to go for (dem thighs), and while I did flirt with pretty much everyone at least a little bit, it didn’t take him very long to completely win me over. Vetra put in a REALLY GOOD EFFORT though, and I’m currently starting what I will refer to as my “spiky girlfriend” playthrough. I’m VERY VERY excited that Jaal is being added as a bisexual romance option in the future (as was originally intended), not just because he is obviously bi, but because he is so Good and Pure. Everyone should get to experience that. 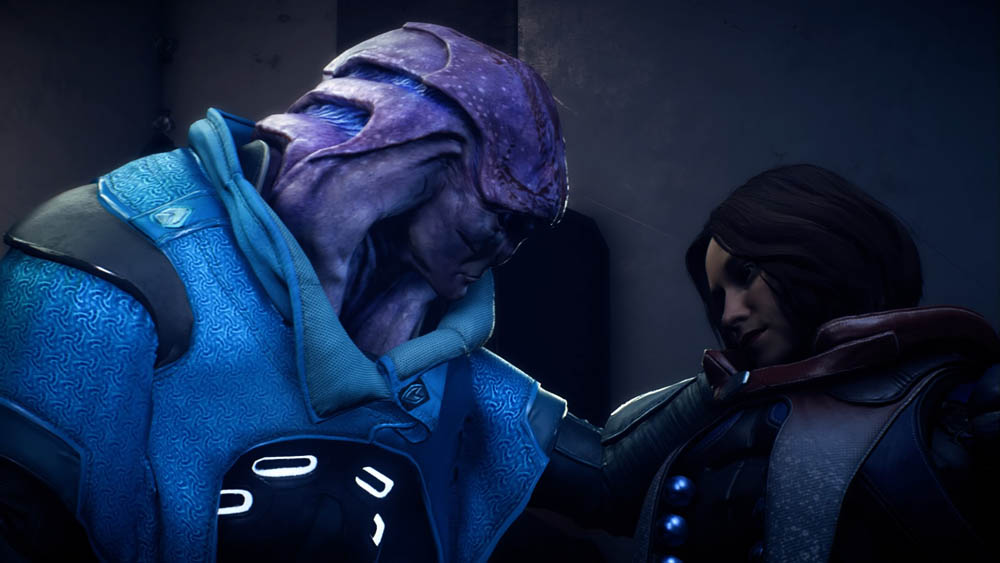 Good alien boyfriend tip #1: ladies like it when you put your hand on their shoulder in a time of need.

What makes someone a Good Boy? Well, it’s not easy. A Good Boy is in touch with his feelings and not afraid to show them. A Good Boy rejects toxic masculinity. A Good Boy loves and respects the women in his life and cherishes them deeply. A Good Boy knows to trust your judgement as an autonomous person. This shouldn’t be a difficult thing to find, but of course it is. And alien romance is a great way to explore things like this because aliens are ostensibly free of the same history and baggage that plague relationships between men and women. Particularly cis heterosexual men and women, though patriarchy is such a tenacious asshole it affects everyone regardless of who they are. And I feel like this romance was pretty successful in exploring that.

Jaal is most definitely an attempt at the thinking lady’s ideal man, and I think they really succeeded here. The Jaal romance is one filled with a lot of mutual respect and affection, and I really like it a lot. It takes a while to really gain Jaal’s trust. You have to reach a certain point in the story before he really decides to let Ryder in. It winds up being hilarious though, because while he is reticent with Ryder, he is NOT like that with the rest of the crew. I’m pretty sure every female crew member I have taken out with him has wound up a giggly mess at some point, and not just Peebee either. In a truly amazing twist, it turns out Jaal is actually really bad at flirting for an angaran, something you find out if you wander around Aya long enough. He seems to be having NO TROUBLE with the aliens, that’s all I will say. It’s clear that the writers were attempting to give players what they loved about the Garrus romance in the previous trilogy, though I think Jaal and Garrus are both completely different characters. Also if anyone is the Garrus in this relationship it’s Ryder. (I’ve obviously thought about it a lot.)

The man has certainly done wonders for Andromeda Initiative/Angaran diplomatic relations, I will definitely say that. I mean, I probably would still have great diplomatic ties with the angara, because I already feel bad enough about the unchecked colonialism in this game, but wanting Jaal to like me was a huge motivator for about 90 percent of Fiona Ryder’s actions. I even saved space whales for him, which if you know my personal stance on whales (horrible monsters; keep them away from me), this is a huge deal. But it all paid off, because in the end I got to make out with him in his childhood bedroom, something I didn’t realize was my jam, but now extremely is. Thanks, Mass Effect Andromeda, for broadening my horizons! 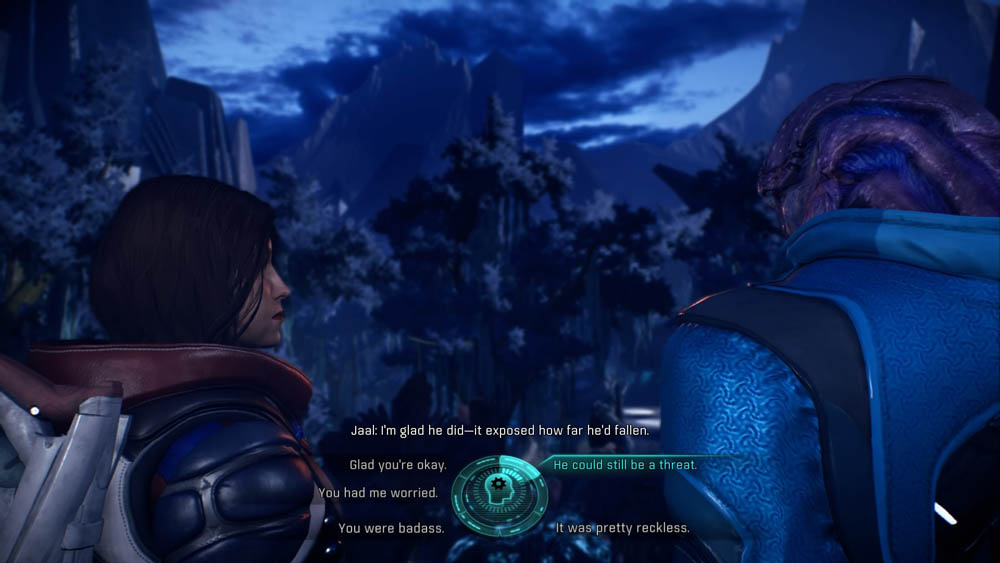 Good alien boyfriend tip #2: Make sure she knows you appreciate that she helped you shoot a jerk. Scenic and romantic location a bonus.

Jaal is also an exceptionally emotionally intelligent person, in a way that I don’t think you see very often in games. And Ryder is too. Emotional intelligence is not something that is usually prioritized in video games, especially a big AAA production like Mass Effect Andromeda. The stoic, grimdark hero whose only emotions are revenge, maybe occasionally kissing a lady only to be overtaken by more revenge when she is ultimately killed are still pretty thick on the ground. So to have a game where there are two is really important. (And I could definitely argue this game has more than two.) Ryder has moments where she really sees people for who they are, which I think is a great asset given her role as Pathfinder. This romance winds up being between two people who I think really get each other, and there are lots of great moments that reflect this, like the email Jaal sends you about how much he loves Ryder’s mind and work ethic, as well as some of the more *ahem* physical pleasures they engage in together.

SPEAKING OF PHYSICAL PLEASURES. Angaran Affection, which is the name of the quest where you can finally get to home base with Jaal if that is your desire, is probably one of the most female gaze-y romance scenes I’ve ever seen. Even in the previous Mass Effect games, particularly Mass Effect 1, the gaze of the romance scenes always felt like they were for men. Even femShep/Kaidan and femShep/Liara (ESPECIALLY femShep/Liara). Those scenes have always felt to me like they didn’t understand what women find sexy and definitely did not have female pleasure as the focus. That is definitely made up for in Angaran Affection. I won’t go into further details, but there is a waterfall involved. Jaal is all about taking you to beautiful places. Sometimes you even get to shoot people there. 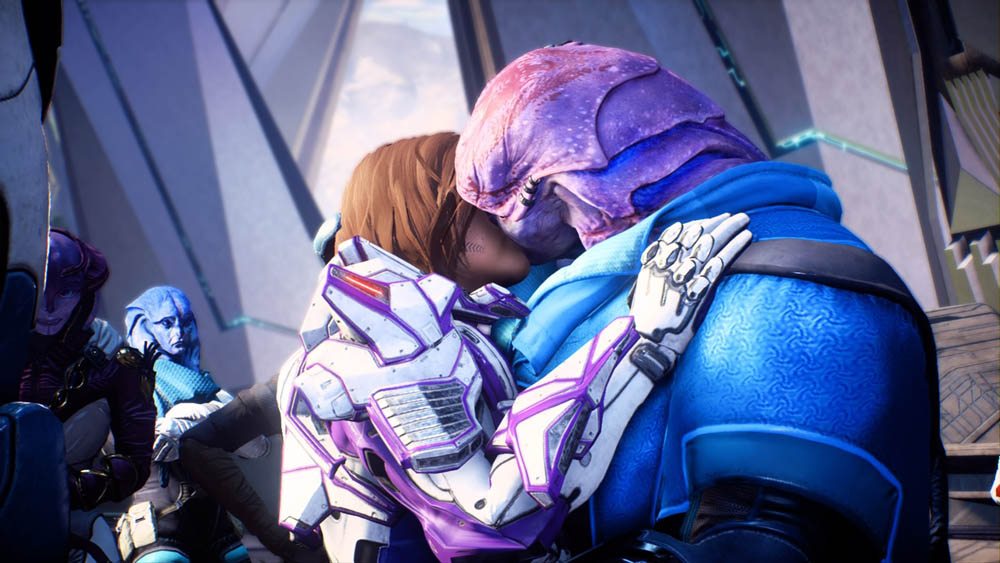 However, the romance animations in this game are very strange. Even stranger than Dragon Age: Origins, which is saying a lot. Like a lot of Mass Effect Andromeda, the content is there, but the execution is off. The sex scenes feel a bit more like when you make your Barbie dolls have sex than something actively sexy, and a lot of the romance stuff is very stilted and awkward, but not in a way that I think it is intended. It makes it feel like the developers were embarrassed by the lovey-dovey parts, so a lot feels rushed and perfunctory, which is kind of the opposite of what you want in romance! The best parts of falling in love with someone are the lingering moments, the awkward silences, the stolen glances leading up to actually triggering the romance, which is something I think Dragon Age: Inquisition often did well that Mass Effect Andromeda does not. I also would have liked more romantic moments between the big missions and more moments of emotional support with your love interest, one because I feel like Jaal in particular absolutely would be there for Ryder in that way, but also because I think this would be something the character really needs. A lot rests on Ryder’s shoulders, and she is not prepared for it, and having a lover there in those moments when you feel most unsure of yourself are sometimes the sexiest moments of all.

There also is not nearly enough banter about it, which is always my favourite part. Even more than the naked parts. Especially since in Andromeda all the banter happens while you’re driving around in the car, where everyone is literally in a three person cuddle pile at all times. (Have you ever changed the camera angle to look inside that thing? It is SMALL. These people are in such close proximity they can’t help but make out with each other!)

Anyway, as fun as sex and romantic love is, the next installment in this series will take a little bit of a different track. I’ll be talking about familial love and the importance of family in this game. So there will be less jokes about boning in zero g but maybe not zero. Familial love is a huge part of this game, much more so than in the previous Mass Effect, and I think it doesn’t make sense to ignore it.