This tarot-into-digital media topic will sound like a bit of a stretch. I’ll tell you right now, the art of tarot itself is a stretch—it’s an odd intersection of personal relatability and interpretation of cultural and situational symbols, either ending with you having a huge card collection or an uncanny ability to relate anything to tarot (or occasionally both).

Tarot, a card medium that was given a framework in the 1600s with the printing revolution, ties together new, relevant symbols for how people saw archetypes in their lives along with a dynamic gaming medium (combined with some good ol’ fortune telling and cool designs). So, how have the games of the modern era translated tarot and all its layers of characters, cards, and real-world application? How can we take cards with names like “Temperance” and images like the Death card and relate them back to the games we play? (Fun fact: Not every single skeleton-looking character has to be a Death card, though they absolutely can be.)

The main crux, draw, and beginning allure of all tarot is the art of the cards itself. Symbols, art styles, period differences—how tarot and its “characters” on the cards have evolved over the centuries is its own discussion, but how people are lured in by how each card and deck’s look is the unique aspect of this divination medium. And that uniqueness, that malleable, adaptable nature of each Major Arcana, suit, or court card, and turn it into a card archetype allows the medium to breathe new life into each deck and interpretation of card, and even now allows popular culture to encroach on its traditional roles. 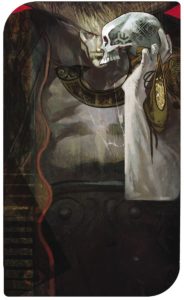 Take for example Dragon Age: Inquisition, and its use of tarot cards as a “character profile” and thematic artwork. While the art of the cards alone is arguably one of the best collections of in-game media ever compiled (BioWare, if you’re reading, I and many others would buy one of those full decks ASAP if you ever release it solo in the future), one begins to understand the nature of the cards a lot more when related to the characters in question. If the Rider-Waite-Smith interpretation of The Devil card is too abstract, foreign, and creepy for some, then perhaps seeing Iron Bull as The Devil highlights the card’s promiscuous, tumultuous nature. If a blue, cryptic Queen of Cups from the Book of Thoth deck is too mysterious, then maybe seeing Cassandra Pentaghast as the queen in question is better for people who can relate characters familiar with the game to archaic archetypes. Its success at communicating the cards’ possible roles created a beautiful, working tarot deck, and even spawned a fan project (Arcana: A Dragon Age Zine) where players or those familiar with the game portrayed their own Inquisitors to tarot cards they felt suitable for the card’s meaning.

In other games that have tarot design enticement, the Persona series (the latest three in particular) utilizes a mechanic where the player can upgrade and unlock different “Personas” that are all modeled after the Major Arcana (the most recent installation using French translations for the cards). These designs not only reflect the cards, but they are garnished with design motifs and symbols relating to the character’s personality, character traits, and growth in-game, ranging from a Hermit as a hacker UFO to a fanciful Japanese lord for The Emperor (and an infamous schlong-shaped chariot demon design for The Tower, but let’s not get into that now). It’s the artwork that captures the imagination, the dialogue of the personas that interact, designs that inject the symbolism into the game and characters, and the compositions of each card that give tarot and all its different decks the sort of character that each card means.

How much easier, then, is it to relate to tarot when you see your favorite characters and moments personified as those lofty card roles? Not only does the artwork cast the line, but the characters are the lure, pulling you into greater understanding of tarot and its archetypes—not by years of study on an archaic deck, but because you went down a specific romance option for Dragon Age: Inquisition and can relate that character to that Empress card, or because you embody natures of a card into a cool character design and dynamic. Utilizing spreads and drawing cards from the deck is another step up from the card artwork, though.

Now that you’ve seen them in a new, revitalized light, it’s time to put them into action. Take example from the title character in Binding of Isaac—Isaac is forced to traverse a basement hellscape and may just happen upon a tarot card out of the hundreds of items in the game. To Isaac, they’re a way of seizing his destiny with each item combination as you take him through the maps. With items being a core mechanic in Binding of Isaac, there is a subset group of items called simply called “tarot cards”—items that are usually a one-time use collectible that can either advance or help buff the player’s stats on a floor run (not to mention the Isaac-like scribbles of the Major Arcana are adorable). A card’s in-game abilities vary from summoning your mom’s foot to damage enemies to warping back to a room, and how they interact with Isaac’s other power-ups/items is what brings back the spread around to tarot.

As tarot readers pull spreads, people quickly begin to learn, formulate connections, or sometimes grow wary of the different cards according to whole circumstance of query/situation/card. Ask a question and didn’t quite get the cards you were expecting? Too bad; use it or lose it. Got The Emperor when you needed some soul hearts after a tough room? Make it work. One day you may want to see The Sun (heals the player, damages enemies, and reveals the floor), you get The Devil instead (heightens damage by 2) and, inevitably, you will have to work around the answers to the questions or problems encountered, whether in-game or in real life. Binding of Isaac’s strengths in tarot are how cards are utilized, archetypes are strengthened, and your understanding of tarot and its pantheon live, breathe, and behave like a functioning item to operate in.

From a storytelling side (other than your use and mechanic interpretation), tarot readings in game cinematics or decision-based stories aren’t scenes that are done very much, if at all. How do you portray a medium based around divination when you don’t want your game’s foreshadowing to hit your narrative like a sledgehammer?

One of my favorite examples of tarot used for narrative thrust in games is probably how it’s used in the final level of Silent Hill 3. In the segment, Heather Mason wanders an impossibly built and spacious church, amassing tarot cards in her inventory for a puzzle solution in Alessa’s—as well as Heather’s—old room to get to the final boss. The in-between gameplay, while littered with monster encounters and oddly acted cut-scenes, allows moments between rooms to rest in the silence or white noise of the Otherworld’s hauntings, pondering on the cards Heather’s gotten over time. The puzzle itself is arrangement based (clues given in either rhyme or sketches depending on the game’s difficulty level), leaving the player to mull over each of the meanings. Mostly Major Arcana, the cards are also obtained at sites where a card is hinted to relate to another character in the game, both thematically and symbolically.

As the game’s protagonist, Heather’s room is home of The Fool card. The Hanged Man is found after an encounter with the supporting character Vincent (a former priest of the game’s cult turned aide to Heather) who flips her perspective about the monsters with a gut-wrenching revelation about what they might actually be outside the Otherworld’s machinations. The mystery and arcane duty of the Cult’s library are in the same room as The Moon, with Claudia’s ties of warped visions of faith and inspiration earning her a High Priestess card in her room. The most unique out of all these cards is a “Eye of Night” card, a Major Arcana invented for Silent Hill 3. In-game text reveals that it was a card from a fictional deck, and this Major was “supposedly lost,” mysterious, and never printed. The deities and old gods of Silent Hill’s power loom heavy over this card, as you find it on a chapel podium before you enter the level proper. Symbolism is hammered into the game’s design and core with the subtlety of neon paint and, for Silent Hill 3 to use it and tarot as character tie-ins and as a puzzle solution, is more than fitting for the divination art.

After metaphysics-ing to hell and back for tarot’s case in games, it might feel a little disenchanting to tell you that tarot’s main model (suits, royals, etc.) was originally based off of poker decks during the Renaissance. Games inspired from other games? Blasphemy! But much like the option to breathe new life and designs into the archetypes, how we use tarot to our advantages in new scenarios, or how we use them in our own life’s stories (in spreads or cards we relate to), is what matters most. Your interpretation, whatever it is you’re passionate about, is how you’ll see yourself in tarot, and will help you apply what’s already under the sun in both the world of tarot and video games.